The Baseus 100W GAN2 Fast Charger was recently released in two variants, one sporting a single USB type-C port and the other offering a more generous amount of ports, two type-C and two USB-A 3.0.

The device that I have for testing is the single-port Baseus which is clearly more suitable for charging up a laptop and nothing else, so it may not be a bad alternative to the more expensive native Apple charger (I don’t doubt that the day when the MacBooks will come without a charger is sooner than you may think). 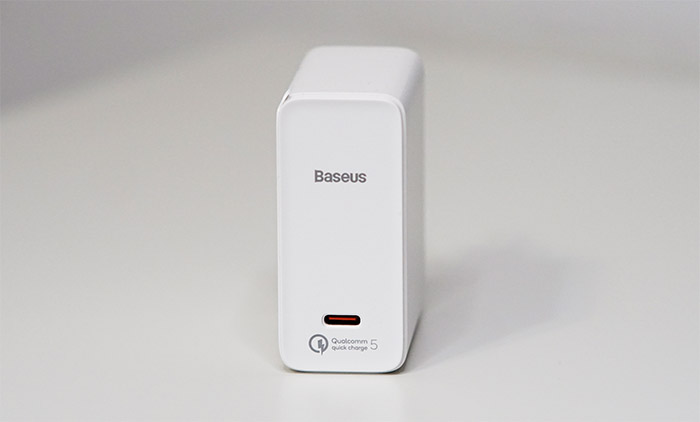 I have tested a few other GaN chargers before (such as the RAVPower 65W charger), but this is the first GaN2 device that came into my hands and truth be told, I was unaware of such significant advances in this field to warrant a new generation release. And, after checking out any info I could find on the Gallium Nitride 2, it turns out that Baseus and Anker have managed to use the GaN technology more efficiently than before, so, to showcase the increased efficiency, they decided to called it GaN 2.

This means that we’re dealing with the same technology, but the power output is higher, there is less heat and the chargers can be smaller. The Baseus fast charger is no larger than other 65W GaN chargers that I checked over the last couple of years and since the output is 100W, there is clear improvement over the previous generation of GaN chargers. Indeed, at 2.6 x 2.2 x 1.2 inches (or 6.7 x 5.5 x 3.0 cm), the Baseus Gan2 charger is currently one of the smallest 100W fast chargers on the market, but it does have a bit of weight to it – 6.27 ounces (178g) – which makes it feel more expensive that it really is. The device is made of plastic and it’s covered by a white matte finish, and, depending on the region you’re getting it from, the plug could be retractable (US) or permanently pointing outwards (the case in the EU). 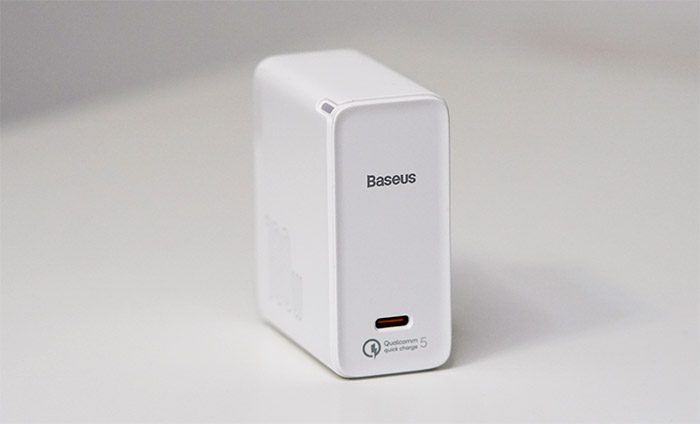 Obviously, the retractable plug will make carrying the charger around around far easier, but even the non-US plugs should not take that much space from your bag or purse. Baseus has added an LED to the side of the charger which lights up after connecting the device to a power source (it will remain lit for a while after disconnecting the charger) and the model that I got has a single USB-C port that supports the Qualcomm quick charger 5 technology. According to Qualcomm, this tech is the number one method for fast charging, being able to charge up a device from 0 to 50% in five minutes, while also keeping a lower temperature (up to 10 degrees C). It’s clearly going to be dependent on the compatibility with the device that’s being charged, but the potential is definitely there. Perhaps the only possible shortcoming in terms of design is the single port, but if you need to feed more than one device at the same time, Baseus has made available another 100W GaN2 fast charger that has more ports available (as I said in the intro).

The single-port charger should be more than able to keep up with a 16-inch MacBook Pro which comes with a native 96W power adapter that is at least twice the size of the Baseus charger. And I saw that for whatever reason, Apple has still not adopted the GaN tech, but should you truly go with a more inexpensive third-party charger? It depends on the fidelity of the power output. The advertised power delivery is 5V/3A (15W), 9V/5A (45W), 12V/3A (36W), 15V/5A (75W), 20V/5A (100W), but this needs to be tested and to do so, I used a small multimeter that measures (as accurately as it can) the voltage and amperage of the current that’s transmitted from the charger towards the device.

To pass this test, it needs to be as close to the advertised values and to be as stable as possible to not damage the devices that need charging – this is the main reasons why people stick with the original chargers. For this test, I used two devices, a Pixel 2 XL smartphone and a 13-inch MacBook Pro (2017), and I will compare the results I got using the original chargers with those that I got using the Baseus GaN2 fast charger. The first device that I used was the Pixel phone and, as you can see from the photo, using the original charger, I was able to see 9.06V with the amperage ranging between 1.28 and 1.36.

So, yes, the results are not as good as with the apple charger, but within the acceptable parameters nevertheless. And there doesn’t seem to be any risks of using a third-party charger even with an Apple device (which are apparently deemed more sensitive).
The usual fast charger has the bad habit of getting very hot while charging up a device and a GaN charger, being smaller, gets even hotter, right? Not necessarily and the Baseus has proven that even if it can output 100W, the charger won’t get hot to the touch.

And that’s because it uses what the manufacturer calls BCT or Baseus cooling technology which seems to be using nano-level heat dissipation materials. I am unsure about what type of materials we’re dealing with (probably graphene), but it does seem to work since the charger did not get hot while I was recharging the MacBook Pro (it can get warm, but not hot – if it does, you should contact support since you most likely have a faulty unit). 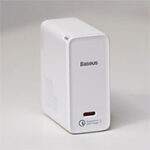