The 65W Baseus Adaman is an improved version of the 20,000mAh (lithium polymer) power bank that the manufacturer has made available a year ago which supported quick charging up to 22.5W and this time, the output power goes up to 65W, so it should be enough to keep a 13-inch MacBook alive along with some other less demanding devices.

I don’t think I need to address the importance of carrying at least one power bank with you when you travel, not when the battery life of all devices hasn’t really increased that much, while we now have far more products that do depend on (sometimes) daily charging. 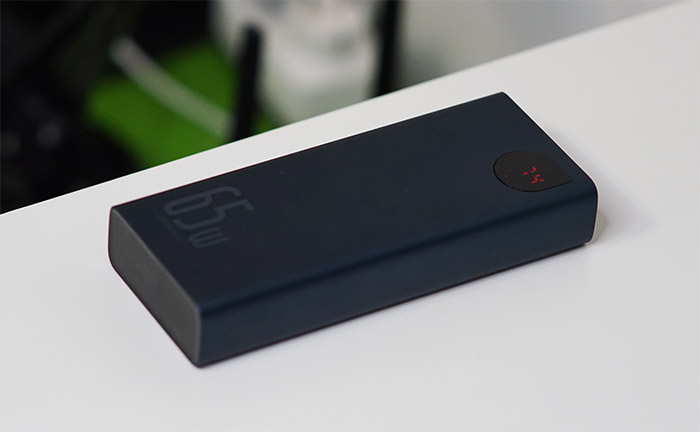 You now have a smartwatch, a pair of TWS earbuds, a smartphone, a camera, so yes, you do need a power bank. And the Baseus Adaman is more than able to keep up with a larger number of devices, offering 20,000mAh, four USB ports (from which three can be used for charging other products) and there is a small display that mainly shows the remaining battery life in percentage. Baseus has been experimenting with the design of its power banks and percentage displays for quite a bit, but I do think that the Adaman series is the best looking one.

So yes, the Baseus Adaman 65W may not be the smallest power bank, but it certainly has one of the best designs, rivaling the 10,000mAh Crave Plus that I tested more than a year ago and which I deemed the most elegant power bank available at that time. The Baseus 65W measures 6.0 x 2.6 x 1.0 inches (or 15.4 x 6.5 x 2.7 cm), so it’s not really the power bank that you can just slip in your front pocket, it’s going to require some space from your traveling bag and it will add a bit of weight to it – the device weighs 1lb (or 450g). Just like the Crave Plus, the manufacturer decided to rely on an aluminum alloy as the outer shell for the power bank (it’s covered by a dark blue matte finish) and at the top and the bottom, there are sections of hard plastic (black matte). 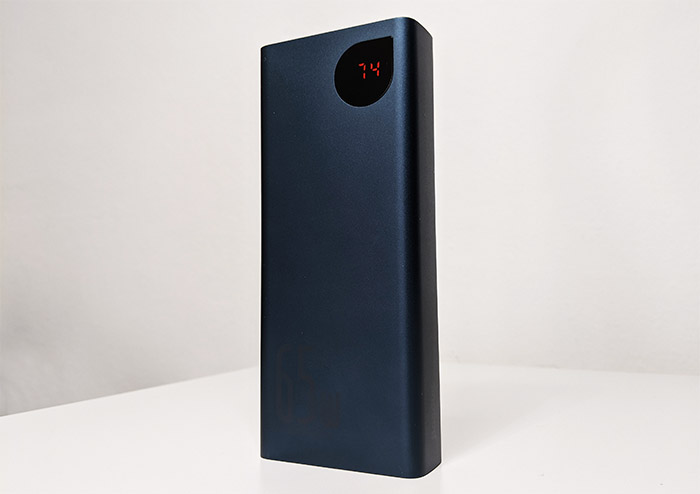 Within the metallic shell, Baseus has made a couple of holes, one for the percentage display and the other for the side button. This circular button is used to enable the display and to switch between various info. By default, it will show the remaining battery life in percentage, but, if you have at least one device connected, press the button again and it will show the Voltage; press it once more and you will be able to see the Amperage as well. If you have more than one device connected, you will notice that the power bank will seemingly display the voltage and amperage of one device, but, if you press the button again, you will see that it moves on to the next device, showing its voltage and amperage.

The results were also quite accurate, pretty much identical to what I saw when using my multimeters. Before moving on to the test, I need to mention that at the top of the Baseus Adaman 65W, there are four ports, the first being a USB type-C PD 3.0 port which, when used by itself, can go up to 65W if the charged device (and the cable) supports 5A – this port can be used as either output or input (to charge the power bank). 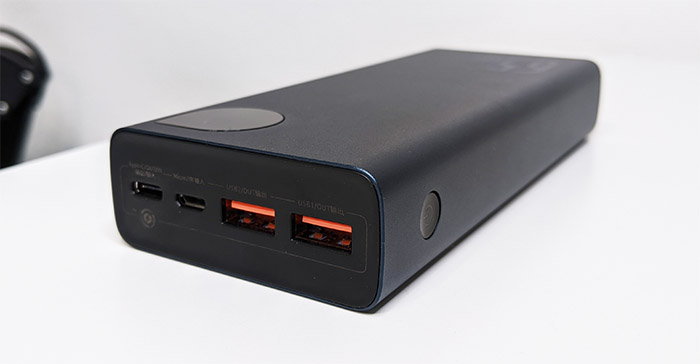 The second port is a microUSB that can only be used for charging the Baseus Adaman (not sure if it was really needed, but still a welcomed addition) and the last two ports are USB-A 3.0 QC. If you use the USB-C with any of the USB-A ports at the same time, the type-C will be able to go only up to 45W and the USB-A up to 18W. Now, let’s put the power bank to the test. 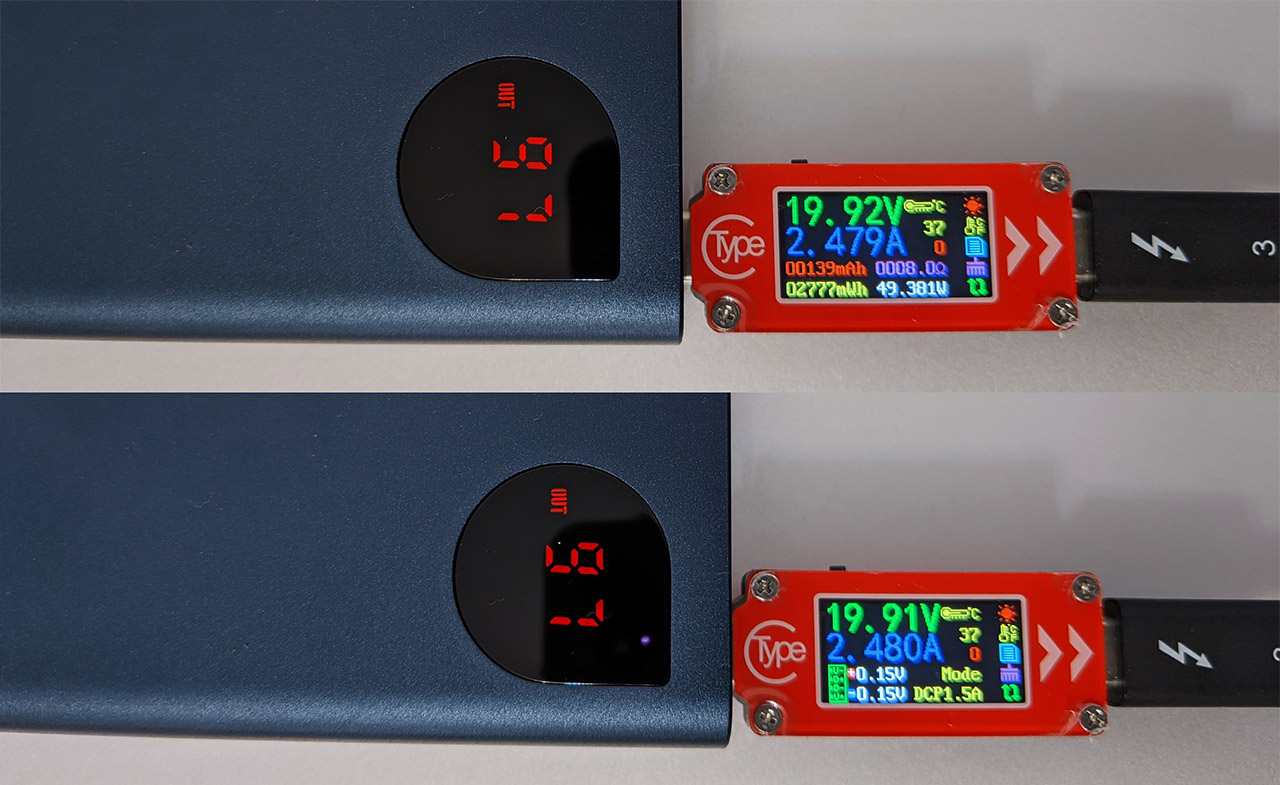 Next, I connected a smartphone (a Pixel 2 XL) to one of the two USB-A ports and I could immediately see the 45W limitation in action, since the MacBook connection dropped to 43W, but the voltage remained very close to 20V and the amperage ranged between 2.164 to 2.165A which, again, are very good results. The Pixel connection showed an average of 6.3W and a fairly stable voltage at 4.91V, while the amperage ranged between 1.265 to 1.282A. 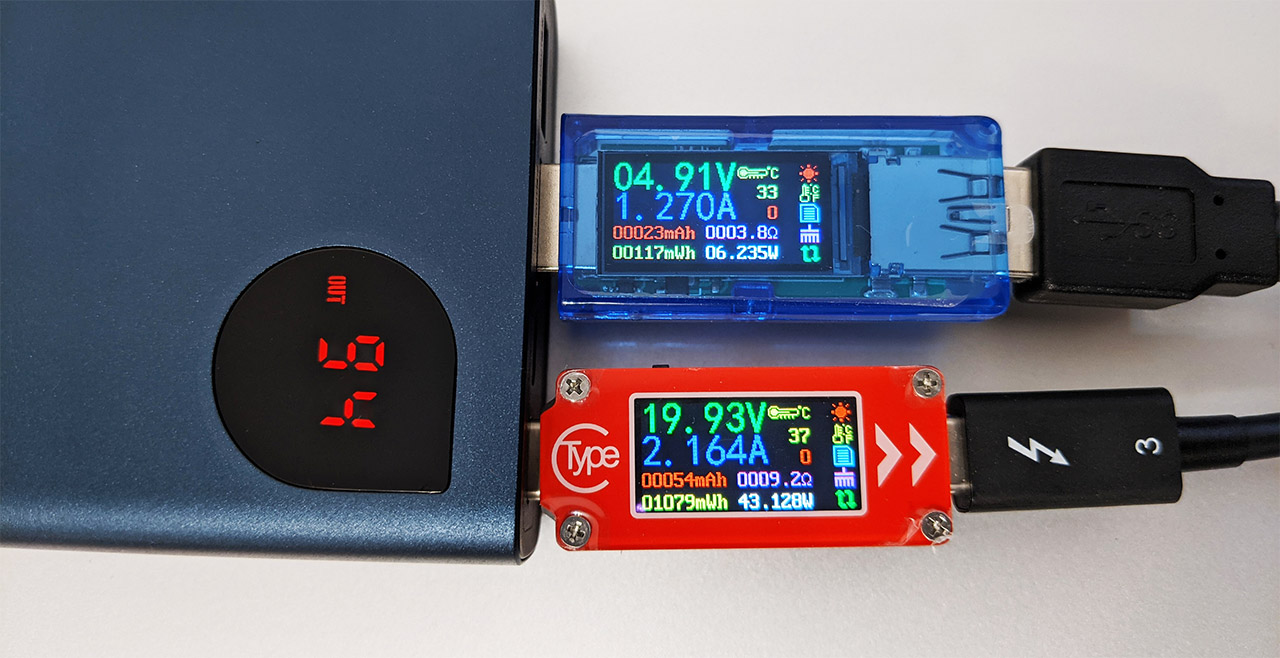 Afterwards, I decided to connect only the Pixel 2 XL to the power bank and check the results that I got on the multimeter. They didn’t change that much, since I saw a power output of 6.9W, an amperage that ranged between 1.278 to 1.411A and an average voltage of 4.9V. Lastly, I checked the connection with the USB-C port using the Pixel 2 XL and the voltage went up to a stable 9V, while the average amperage was 1.3A, similar to the USB-A port. Even though the Baseus Adaman 65W advertises 20,000mAh, the rated capacity is somewhere around 12,000mAh at 5V/5A – a loss of up to a third of capacity is usually expected from most, if not all power banks.

As a test, I decided to connect the Pixel 2 XL which has a 3520mAh battery and, charging it from 0 to 100% using the USB-C port took away about 23% from the power-bank’s battery, so I could charge up the phone about four times – it’s in line with the 12,000mAh rated capacity. To recharge the power bank, I used a Huwder 150W charger and it managed to push it from 0 to 100% in a bit more than a couple of hours.
Note: Baseus has added a fairly short (but welcomed) USB-A to USB-C cable inside the package. 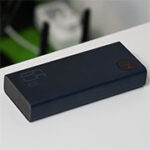