The best 12V car heater should be able to replace the built-in car heater (at least to a certain degree), being capable to defog and even defrost the windshield, all that while keeping the passengers relatively warm. Well, at least that’s what we expect it to be, but, unfortunately, this cannot happen because the 12V socket simply wasn’t designed to handle a powerful car heater; instead, the maximum we can really get is a simple windshield defogger and, at most, to warm our hands (the maximum power output is usually between 150 – 200W).

One problem that can arise while connecting a 12V car heater is that the socket comes with low amperage fuses and, if the device you’ve connected isn’t properly made (the cheaper the cost, the lesser the quality), then there is a high chance these fuses will blow or worse, the entire cigarette lighter wiring can become compromised. So, one shouldn’t use a 12V car heater under any circumstances? Well, not necessarily. Since the cigar lighter socket is the weak spot, the heater can be hardwired directly to the battery (with a fuse with higher Amperes to protect the wiring) or you can use an inverter (in this case, you need to be careful not to drain the battery – which can happen when the vehicle is stationary and the engine isn’t running).

So, while a small portable car heater may work efficiently on your windshield (more or less), you may still need to feel warm while driving (especially if the heater gets broken in the middle of the winter) and thankfully, there are some interesting solutions out there, such as the heated seat cushions or electric blankets which will be a lot more effective into keeping your body warm.
Important Note: Be aware that all of these devices can become a fire hazard if left unsupervised or if they function next to flammable materials.

The heater in your car is broken and if repairing it would cost more than the car itself, then a device such as the RoadPro RPSL-581 car heater can ensure that the windshield is kept defogged. Like I said in the introduction, the device will not heat up the car and it may also not be that effective against defrosting since the area from which the air blows isn’t that large (it can partially defrost small areas). One minus would be the lack of a handle which would have made it more easy to quickly defog the entire window, but the RoadPro is still able to defog the windshield in a timely manner even if has to blow air in a more limited space on the window – the device only comes with an adjustable swivel base.

The device itself is not really that small, measuring around 12.75 x 8.0 x 4.0 inches (some devices from the competition are almost half as big – it also weighs about 1.2 pounds) and the case is entirely made of plastic, covered by a black (or grey) matte finish, on the top presenting a significant bulge, while on the front, it has a dedicated area with multiple cut-out areas to allow the air to come out (there are no other ventilation holes anywhere on the case). On the right side of the heater, you can find a relatively large switch to enable the Heat mode or the Cool mode (if kept in the middle, it will turn Off the heater) and, on the rear side, there’s a built-in power cord (about 6-foot long) that easily reaches into the lighter socket.

Next to the cord, a bit more to the left, there’s a small area where you can replace the fuse (the device comes with a 20 Amp blade fuse – be aware that some 12V car heaters have smaller, harder to find fuses and, since these tend to blow up a lot, you need to make sure you can replace them) along with a LED indicator. In order to install the RoadPro RPSL-581, you can use the quick mount adhesive to temporarily attach the car heater to a specific spot on the dashboard – RoadPro has also added some screws inside the package, if you want to permanently mount the device anywhere in your car. While functioning, the RPSL-581 will draw about 15 Amp and it has a power rating of 180 Watts. 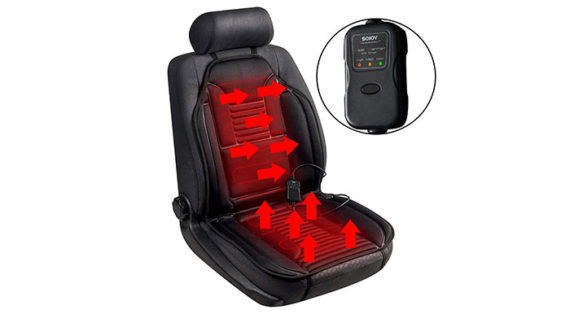 It’s clear that a small car heater won’t be able to keep you warm especially during the winter and the most reliable alternative is the heated cushion, such as the Sojoy SJ154A which, similarly to the RoadPro RPSL-581, it gets its power from the 12V lighter outlet. Of course, this type of devices can be surprisingly useful even if the car heater isn’t broken, considering that not all cars come with built-in heated seats. The concept behind a heated car cushion doesn’t differ that much from the built-in heated seats, both relying on a heating coil (resistor) which sits beneath the seat cover and, because the coil is resistant to the electricity, it will create friction and therefore heat.

Furthermore, in the initial stage, only a small current is allowed to flow through in order to create a field which will trigger an open switch and will close the circuit, allowing the flow of electricity from the battery. This way, the seats will quickly become warm and potentially uncomfortably hot (up to becoming a fire hazard). To alleviate this problem, both the built-in heated seats and the external heated cushions come with a thermostat which, when a certain high temperature is reached, the power is cut from the relay and, when the temperature is too low, it will once again enable the current to flow through the relay (the thermostat can be adjusted to meet the user’s preference). 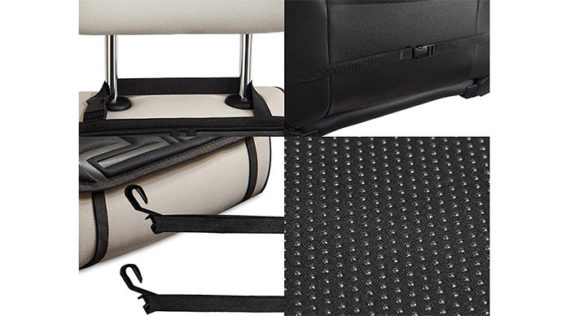 The Sojoy SJ154A is built on the same premise, so, we’re dealing with a multi-functional cushion which can easily fit with any type of car thanks to its set of straps: one strap goes around the headrest, while another goes around the seat to keep the middle area of the cushion close to the seat; lastly, the elastic hook straps will get connected underneath the seat (the entire cushion measures 38.0 x 19.0 x 0.5 inches). The material is a combination between thick and soft polyester fabric, the bottom area being designed to ensure that it won’t slip down (to make sure that this cannot happen in any give situation, you need to firmly attach the straps). It is advisable to not fold the cushion as it can damage the relay – if you see any exposed wires or if the fabric has been damaged, you should not use the product any more as it can become dangerous.

The heat output of the Sojoy SJ154A can be adjusted by the small controller which can ensure three temperature levels (use the large oval button to roam through the three levels) – the maximum temperature that it can reach is 115 degrees Fahrenheit and the controller comes with a 45-minute timer.

An alternative to the car heated cushions are the 12V electric blankets which, similarly to the cushions, manage to do a great job at keeping a person warm (it will not heat a car, nor will it do anything to defrost or defog the windows). The electric blanket is based on the same concept as the heated cushion, so it also has a resistor (coil) which when fed with electricity, it will generate heat, therefore warming the entire blanket surface. One important difference between a car heated blanket and a heated cushion is that the former is a lot more fold-friendly, so it’s slightly more difficult to damage the internal wiring.

The heated blanket that I’ll be focusing on comes from RoadPro (the same manufacturer that made the RPSL-581 car heater and fan) and, at the first glance, the product doesn’t differ in an major way from the regular throw, being made out of a polar fleece material (soft polyester) which is a necessity because it can better maintain the warmth and, it can prevent any potential fire hazard. The size of the electric blanket is 59.0 x 43.0 inches (the cord is 8-foot long with a LED indicator on the plug), it is available in blue and, if you want to clean it, the manufacturer has stated that you should not put it in a washing machine (spot clean only). The reason for this is that the water can deteriorate the material which can have a damaging effect on the wires – as with the heated cushion if you notice any loose wires or if the material has been damaged, you should stop using the product and contact the manufacturer.

The RoadPro 12V electric blanket will draw about 4.6 A (55 W) and, unlike other products from the competition, this one lacks a controller, so, it will turn on immediately after being plugged into the car lighter outlet and will remain active until you unplug it. The electric blanket does have an internal thermostat, but because it has a larger area to cover, the blanket may take a bit longer to get warm and it will not become hot (even if the maximum operating temperature is set at around 110 degrees Fahrenheit). Still, because there is no controller, you need to be careful to not go to sleep and wake up with a dead car battery (a timer would have alleviated this problem).