The Bluedio T7 Plus is an entry-level pair of wireless headphones that uses the ANC technology to cancel out some of the environmental noise for a better sound experience.

I know that the TWS earbuds market is currently the most thriving in the sound department, but quite a few people prefer the fuller sound of the headphones and not everyone likes pushing plastic pieces inside their inner ears. The possibility of connecting via a wire on the go is also something that’s only possible with a pair of headphones. Bluedio was very promising with its early models, but the Turbine series is currently having a bit of an identity crisis, the manufacturer seemingly wanting to move more towards the TWS earbuds development. 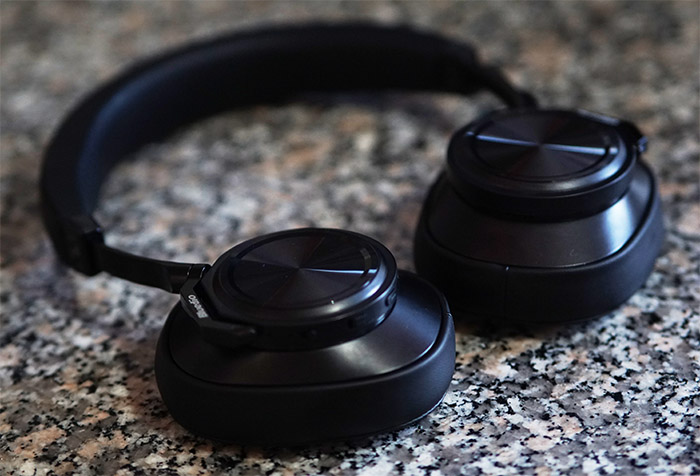 The Bluedio T7 Plus looks identical to the T7 (it is not its successor, they seem to be the same device), so the headphones are about 2 years old, but they still come equipped with a Bluetooth v5.0 chip, appear to have a solid construction and they do offer an interesting feature that I haven’t seen on other over ear headphones. I am talking about the microSD card slot that does allow you to play music without being connected to any external device. For the last two years, I have been using a pair of Sony WH-1000XM3 which, in my opinion, are the best ANC headphones on the market, so I am curious to see how is the current state of the entry-level headphones and whether it’s worth giving the T7 Plus a shot, especially considering their low price tag (at the moment of writing, well below than $50).

As I said in the intro, I have been using the Sony WH-1000XM3 as my daily drivers for more than two years and I have to say that, after taking the Bluedio T7 Plus from the package, they seem more solid. Indeed, despite costing almost a tenth, I do feel like I can move the T7 Plus all day without risking breaking one of the headphones arms, something that did happen with the Sony’s (and it is still happening with the newer model as well). 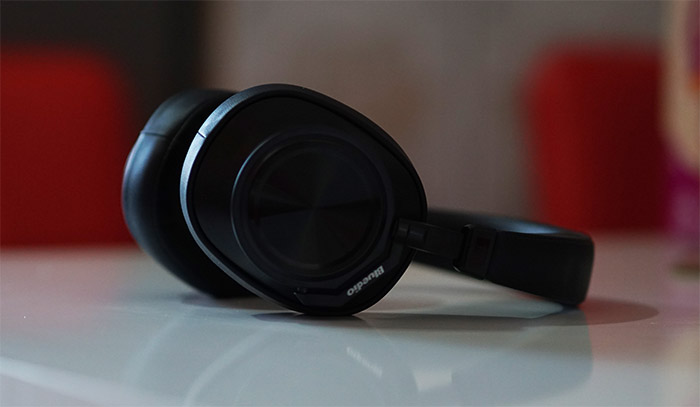 But that’s where the advantages over a flagship pair of headphones end (seriously, Sony, use better materials!). The headband is adjustable (you get to move up to level 9, as inscribed on the metal), but the hinges aren’t foldable and the only allowed adjustment for when you travel is to swivel the earcups. It’s not that much of an annoyance since I could easily slide them in my backpack and there are less parts that can break (again, I’m looking at you, Sony). The headband is covered by what seems like faux leather and it is somewhat soft, but the manufacturer has added a piece of plastic inside the cushion along with some foam.

And yes, it’s soft enough to not become uncomfortable for about 2-3 hours, especially because of the shape of the headband, but I did need a break after more than three hours and I can’t really vouch for the long-term performance of the fake leather. The earcups have a cool design on the outer side and the earmuffs seem to be soft enough. But they’re not very thick, so, it is very much possible to feel the internal parts of the Bluedio T7 Plus. This is something that I have experienced with the Sony headphones as well, but their earmuffs are far thicker and softer. The entire device is matte black and the earmuffs are made of the same faux leather material as the headband. The manufacturer has made the outer section of the right earcup touch-sensitive, so you can double-tap it to either start or pause the music. 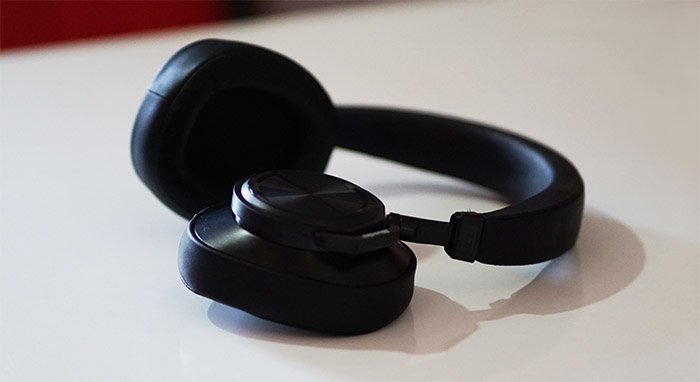 Something that I really liked was the fact that the T7 Plus have an IR sensor which can tell when you have the headphones on your ears, so it can automatically pause the track when you have removed them. This is a feature that has been surprisingly missing from far more expensive brands and, while it’s not always accurate on the Bluedio T7 Plus, it is a nice addition nevertheless.
Besides the touch-sensitive area, there are lots of buttons and a few ports all around the right earcup and yes, it’s always great to feel a button and know that you pressed the right one instead of fumbling with gestures and swipes, but the T7 Plus controls are very confusing, especially when you start using them. You get a mike for ANC, followed by an ANC switch with its LED. The strange thing is that there is also a mobile app available where it seems that you could turn on or off the ANC, but the physical switch is the only one that actually enables and disables it.

Further down, there’s the Power On/Off switch (the device will also turn itself off if it was idle during a certain amount of time) and a Shift key for switching between ANC and MP3 Power mode. This last button is useful if you want to play music from a microSD card and, to enable this mode, press and hold for 3 seconds (you should hear a voice notification). The T7 Plus do rely on a USB Type-C port for charging the inner battery and for connecting via wire to either a phone or a computer. Lastly, you have a Play/Pause button as well and a Next/Forward button that also doubles as Volume Up/Down (if you press and hold). 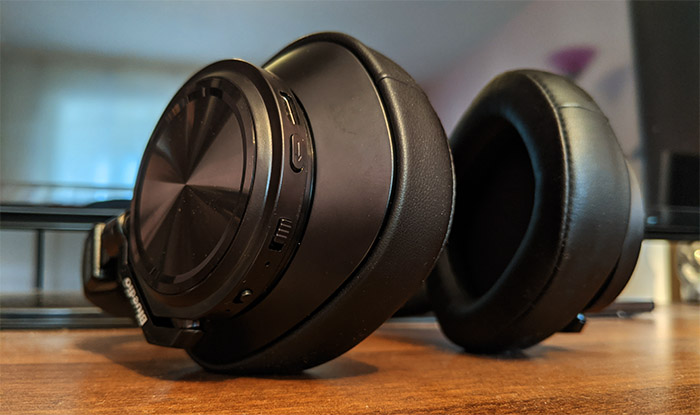 I had some trouble with the volume control because I would easily switch to the next or previous track, but I suppose it is about muscle memory. If it was set the other way around, it would have made far more sense, since you do adjust the volume more often than you move through your tracks. Hidden at the top, rests a microSD card slot that supports storage up to 32GB which may not seem like a lot, but we’re talking about music and, since there is no support for some of the better file formats, you can add thousands of songs.
Note: It’s worth mentioning that wearing the headphones during the summer, they do heat up my ears quite a bit since there is little to no ventilation; the more expensive headphones will also heat up (although a bit less, depending on the brand), so it is kind of a characteristic of this type of device.

The Bluedio T7 Plus uses 57mm dynamic drivers which should translate in a fuller sound and a higher volume, right? Not necessarily, because I had some great, full sound with proper bass levels on a small pair of TWS earbuds (the Coumi Freedom Dots). But it’s true that the potential for good sound is there, but the tuning will be the factor that will make a difference. The T7 Plus also rely on the fairly recent Bluetooth v5.0 and yes, the v5.2 is already out, but truth be told, the Bluetooth version does not make that much of a difference in terms of sound quality if there is no support for some specific codecs. It can improve the battery life and add support for multipoint, but you won’t see it on an entry-level pair of headphones.

That being said, the advertised coverage is about 30 feet in the open and that’s pretty much accurate because I the signal started degrading at about that distance – the same is true for BLE v4.2 (Sony) or v5.2. Unfortunately, I have not seen support for the better codecs out there, such as aptX or AAC – it supports A2DP, AVRCP, HSP and HFP. Pairing the Bluedio T7 Plus to a mobile device (or a laptop) is simple, but can also become confusing because the headphones broadcast two names and the manual encourages the pairing with the name that requires a password.
Just pair with the T7+ since it should not ask any password and the connection should be successful in a manner of seconds.
Note: I need to mention one cool feature and that’s the audio sharing which allows you to connect the Bluedio T7 Plus with another pair of headphones and share the music (you need to use the USB-C to 3.5mm jack).

The Bluedio T7 Plus does seem to come with a companion app, but it’s a very confusing experience. After installing the Bluedio app on my Android smartphone, I was greeted by an intro animation (can be skipped) and then I got lost. The UI is very flashy and there are three categories, Recommended, All Songs and Mine where you get ads from Bluedio and songs created by other people (?).

That’s the Home page, so I moved to the Forum section (second icon from the bottom) and as its name suggests, this is the official Bluedio forum. Lastly, there’s the Person section where you can apparently purchase coins (?) and can use them for various services, such as Cloud storage. I really wanted to reach the section that’s dedicated to my Bluedio T7 Plus headphones, so I assumed it’s going to be the Settings area. 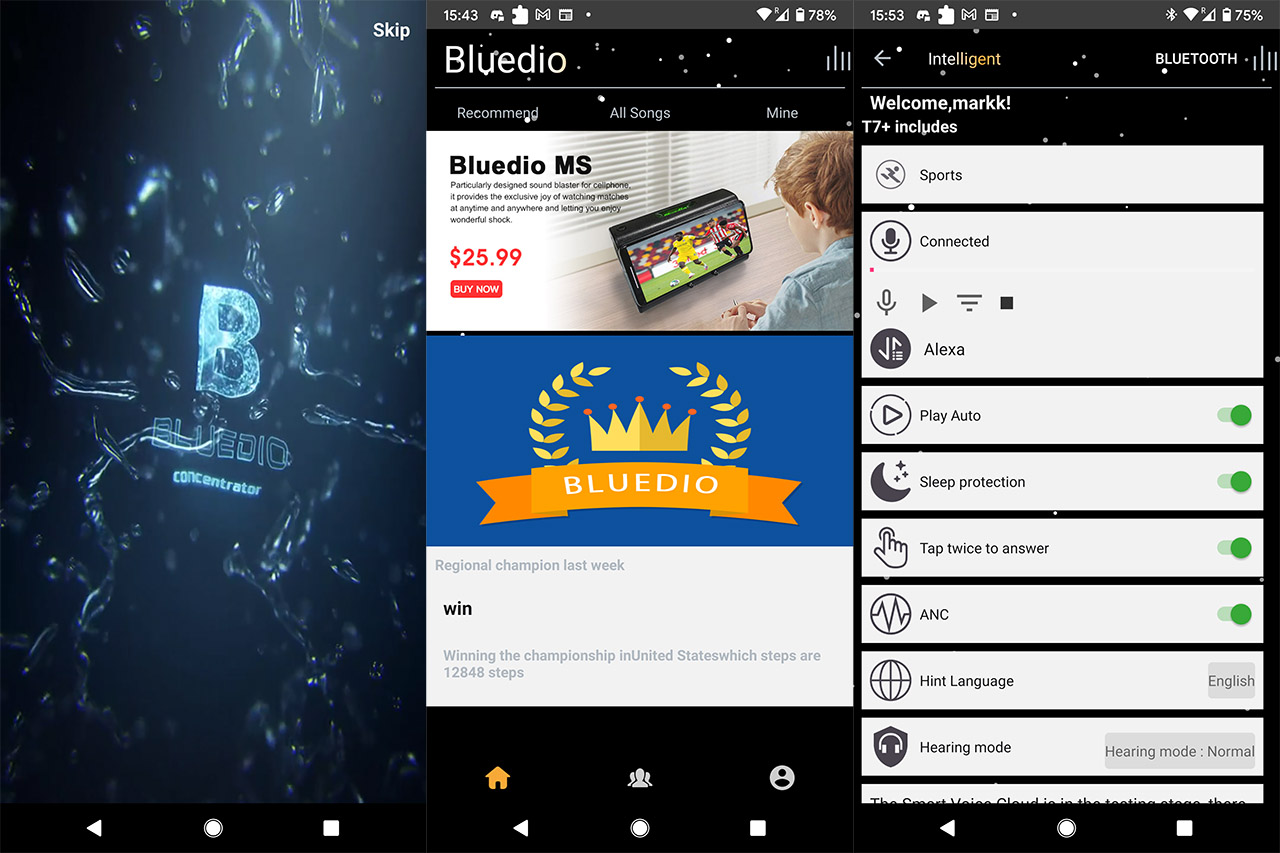 Well, not really because here you can clear up the cache, switch between the app’s night and day mode, log out and more. To view the desired options, I had to return to the Person section and tap on the Intelligent Setting. Here, the first option was Sports which is a fitness tracker and I am not entirely sure what’s the link with the T7 Plus. And then you get to control the headphones (mike, play/pause and enable Alexa). 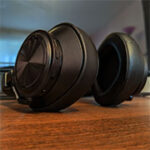