The Choetech Q6006 is one of the many available fast wall chargers from the Chinese-based manufacturer and no, it’s not a coincidence that it features a PD 61W, this device wants to persuade you to leave behind the larger (and currently more expensive) Apple charger. Indeed, the Choetech Q6006 is far smaller than the usual 61W-rated charger (still quite heavy, so it doesn’t feel cheap) and this is possible only due to the GaN technology (gallium nitride), which ensures that the device runs cooler, it is safer, all that while significantly shrinking the size of the charger.

Of course, it’s not only the MacBook batteries that can be recharged with the Choetech Q6006, you can also charge all smartphones (ideally, which support some fast charge tech in order to actually be able to see a difference) and pretty much any other mobile device. It’s pretty obvious that it was designed as an equivalent to the far more expensive charging solutions out there, but does it actually perform in a similar fashion? Let’s find out. 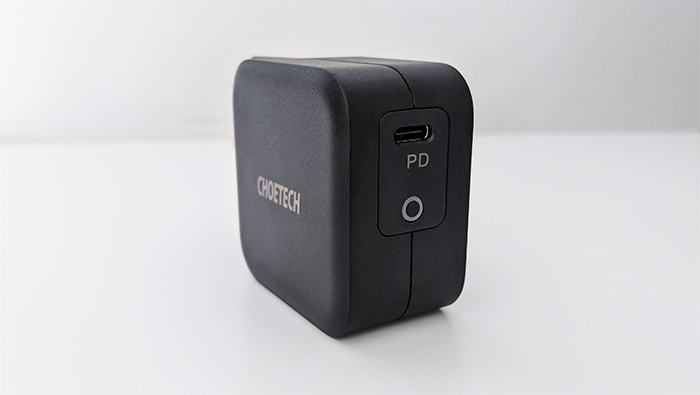 Note: It’s worth mentioning that the Q6006 is available with more than one plug standard (EU and US), so, while these may look a bit different, the performance is still the same.
Design-wise, the Choetech Q6006 looks like your regular charger (as it should), with a black matte finish which is soft to the touch, but there are a couple of elements that stand out: there’s a small circular Power LED immediately underneath the USB type-C port and the plug is retractable (the EU type-plug is fixed).

This means that the device is very portable and, at its 2.0 x 2.0 x 1.2 inches (5.1 x 5.1 x 3.0 cm), it will easily fit in any backpack (or even larger pockets); the device is also quite heavy for its size (weighs 5.1 ounces), but this does manage to give it a more premium feel. That’s significantly below the 2.91 x 2.91 x 1.18 inches of the 61W Apple charger that I got with my MacBook Pro 13 (2017) which I thought was already quite compact (compared to the usual power bricks that come with most laptops) – and yes, the Apple charger plug is retractable as well (the US version, not the EU one). 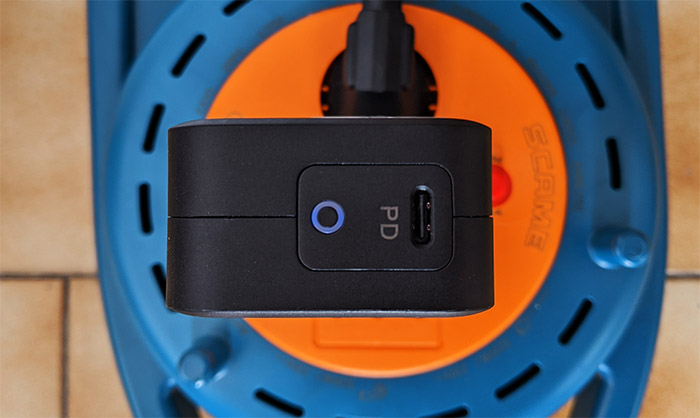 As I said before, the Choetech Q6006 uses the GaN technology (Gallium nitride) which promises to support fast charging up to 65W (the adapter uses it at 61W) and the aforementioned compactness is also due to fewer used components – the manufacturer puts a layer of GaN over the silicon wafer to improve its performance (Apple only intends to release some GaN chargers this year). All is fine for now, so let’s get to see some numbers: the charger supports an input voltage between 100 and 240V (50/60Hz) and 1.5A, while the output DC is rated at 5V/3A, 9V/3A, 12V/3A, 15V/3A, 20V/3A and 20.3V/3A.

Putting it next to the Apple charger, we see similar numbers (which is not a small feat for Choetech), 5.2V/3A, 9V/3A, 15V/3A and 20.3V/3A. But, if there is one thing that the Choetech fast charger is missing, while Apple does not is the UL listing. How important it is you may ask, well, kind of, because it means that it has been tested against some established standards and received the certification of being safe (it’s also quite costly, the reason why a lot of manufacturers avoid it).

As you can see from the test photos, the Choetech PD 61W fast wall charger does a really good job at charging your devices without putting them at risk, so, considering that it’s much cheaper (at the moment of writing) than the Apple charger, it’s definitely an option to consider if your original charger is no longer functioning (one minor complaint would be that there is no USB-C cable inside the package). 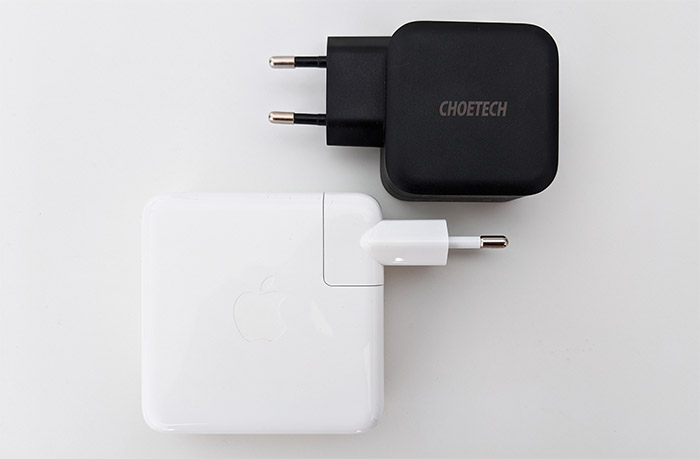 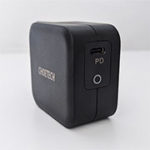