If you’re in the city, it’s almost impossible to not be able to find a way to recharge your phone (you can find a power outlet in most cars, in restaurants, in the train, in the airport and so on), but get only a bit farther from the city’s core and you’re left completely on your own.

It’s true that the powerbanks work great at keeping your smartphone alive in most situations, but, if you’re on a long trip outdoors which includes camping, you may find out that constantly checking your map and taking photos will burn through both the phone’s battery and the powerbank, so, to prevent this from happening, you could give a portable solar charger a chance. I know that the idea of having a few small solar panels quickly charge up your phone and keep some juice for later use sounds exciting, but, unless you’re ready to spend a lot for a premium solar charger, then you need to curb your expectation a little bit since most affordable portable chargers will demand a long time to recharge a smartphone and not all come with a built-in battery. 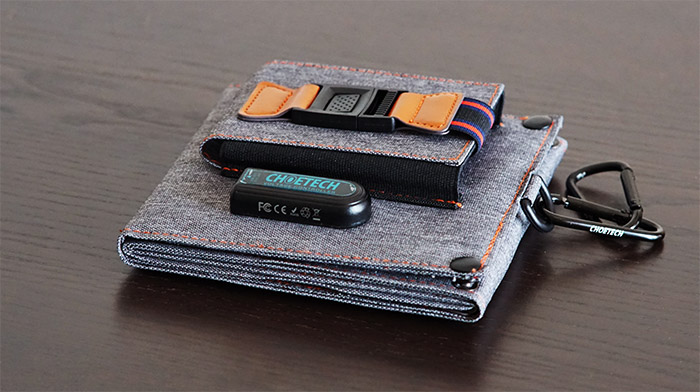 Even so, some manufacturers will allow you to strap the solar charger to your backpack (in order to expose it to the sun) and slowly, but surely get back your electronic devices to 100%. One of these manufacturers is Cheoetch which has a few models available, varying from 14W to 24W in terms of power output and I am going to focus towards the entry-level model, the 14W SC004 solar charger which promises to convert up to 23.5% of solar power into electricity for your devices (that require up to 5V of power). The smaller the power output, the more compact the solar charger can be and, out of the package, the Choetech solar charger 14W does look unexpectedly small (measures 5.8 x 6.0 x 2.1 inches, so it will not take much space from your bag, not more than a folded cloth) and it is covered by an impermeable textile material which, along with the sturdy brown stitches, it does give the device a premium look and feel.

You can extend the Choetech SC004 by releasing the two snap buttons which will then expose the four solar panels that are embedded within the textile material.
When extended, the solar charger measures 26.0 x 5.8 x 1.2 inches, but the good news is that you can attach it to your backpack by relying on the couple of carabiner clips that you can find in the package so you won’t have to rely on some improvisation to keep the device exposed to the sun, just leave it hanging on your back while you’re traveling (the Choetech solar charger can be hanged using the single hook which sits next to the converter or the other way around using the couple of dedicated holes surrounded by faux leather). 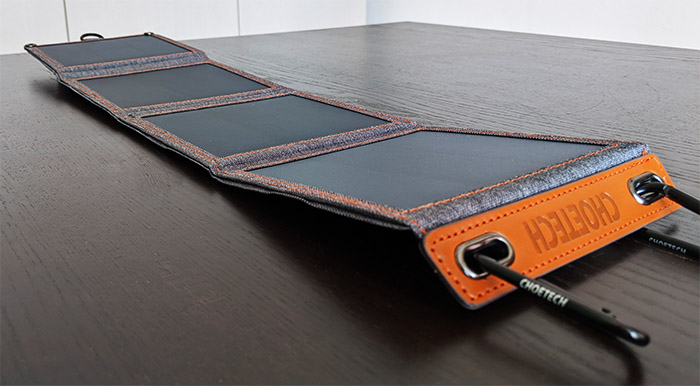 The main side of the SC004 has a conveniently placed pocket where you can insert your phone (it supports even the larger 6-inch+ models) and there is an elastic buckle that can be adjusted in order to ensure that your mobile device won’t fall off. Next to the pocket, there’s a small solar energy converter that has a USB type-A interface. I noticed that the converter looks a bit different than what I expected from the pics on the web: the model that I got is smaller, but I doubt there’s any difference in performance.

That being said, to see how the Choetech SC004 works, I took it outside, put it under direct sunshine and, after I connected my Pixel 2 XL to the solar charger, it immediately started to receive electricity. The problem with most third-party chargers is that you don’t know whether the advertised current output numbers are true since, if they’re not, it could be dangerous for the internal circuitry of the device that you want to charge. Choetech says that the SC004 is rated at 5V-24.A and to check it out, I put a small multimeter between the charger and the smartphone to confirm the advertised numbers.
As can be seen, the multimeter shows a stable 5.28V with 0.022A, so it’s very close to the expected 5% deviation and the low amperage does show that you can’t do any demanding tasks on the phone while it is charging (also, going from 0 t 100% will take more than four hours for a 3520mAh battery). Of course, the output is not ideal, but it’s definitely enough as a back-up solution for when you’re in a place without direct access to electricity. 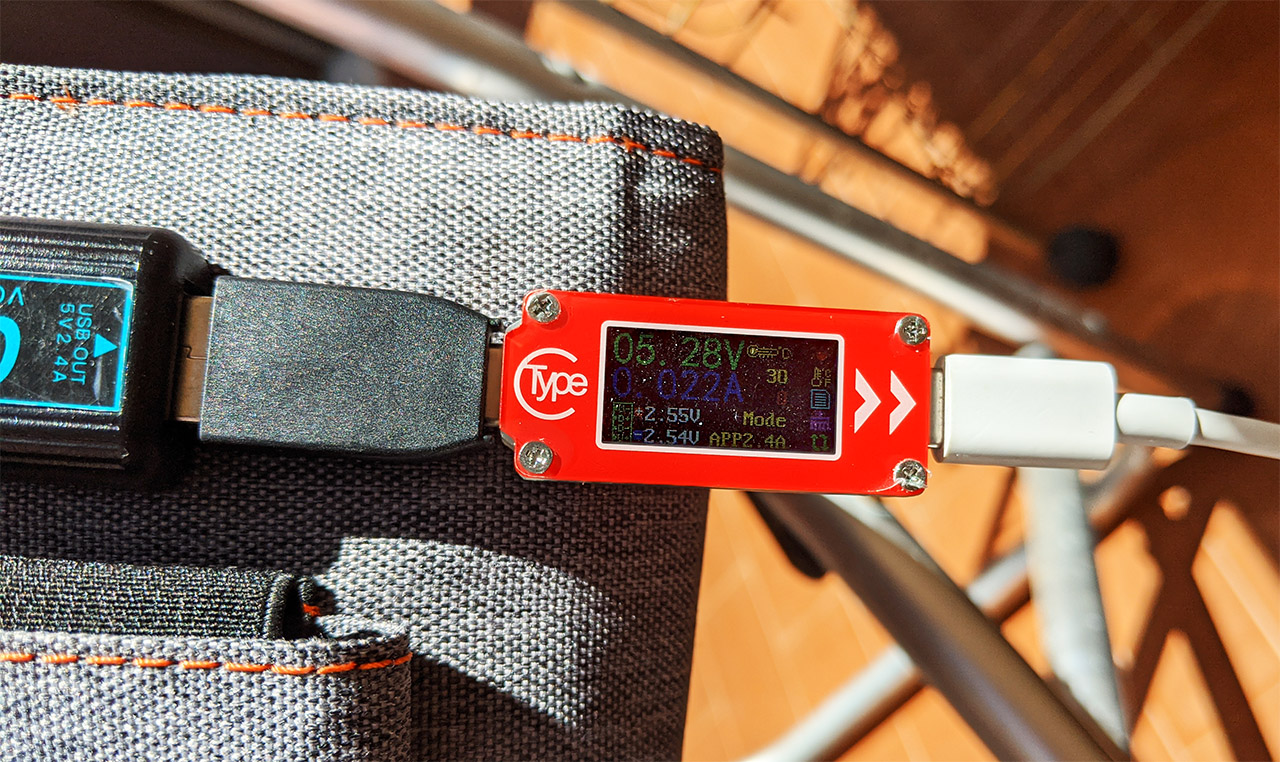 It’s important to know that the solar panels are protected against the high temperature of direct sun rays, but your smartphone is not, so always make sure to keep it somewhere in the shade (or in the dedicated pocket built specifically for this scenario). One shortcoming that I know it’s cost related, but still a bit annoying is that the device does not have a built-in battery, so it doesn’t keep the electricity, which means that you will be able to charge your phone only if the light intensity is not below a certain level (which does include shadows from trees or even thicker clouds) – it’s worth noting that there are some solar chargers that do offer at least 10,000mAh, but these do come at a far higher cost.

Conclusion
The Choetech SC004 is one of those electronic accessories which can prove to be quite invaluable when camping, hiking, trekking (or other similar outdoor activities) but I don’t think that it should be used as your main power source (since pretty much all devices of this kind are going to charge your phone very slowly) and instead, it’s fantastic as a backup solution. I would have liked if it has a built-in battery to store any excess energy, but even without this feature, you still get to recharge your mobile devices using the power of the sun and the material quality is a lot better than on most other solar chargers available out there which makes the Choetech SC004 one of the best options in its price range. 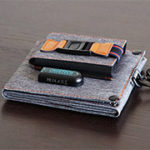