The DH-JH01 is a very compact air purifier that has been designed to cover roughly up to 215 sq feet (20m2), so it’s going to work great for a single larger room (or two smaller ones). And yes, the principle is pretty much the same as with other air purifiers, even the bigger ones. The air is sucked into the device, it gets ‘cleaned up’ by the large HEPA filter (the filter is able to retain harmful particles down to 0.3 microns) and then it gets pushed back out.

To differentiate itself a bit from the competition, the device does have a few interesting features, such as the UV-C light that has the role of destroying various bacteria or viruses and then there’s also the option to add essential oils. 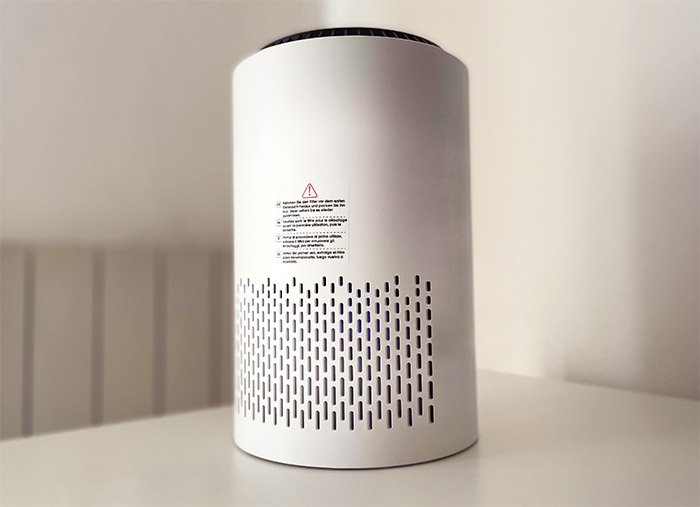 It’s nice to have a cleaner air, but why not have it smell nice as well? It’s not a mandatory feature (and not particularly useful if you have allergies), but it’s a nice touch anyway. I also saw that the DH-JH01 does not make use of an ionized air (anions), so it’s Ozone-free, which is great. Lastly, the manufacturer says that the device is very quiet when running regardless of the speed level and that it needs a very low amount of energy, so let’s put all these claims to the test.
Note: You will be able to find the Pomoron DH-JH01 under various brand names, such as Kloudic, Aroeve or Kioudl, but it’s essentially the same device.

The Pomoron DH-JH01 features a fairly compact cylindrical case made of plastic and its design does remind me of the Levoit LV-H133, a larger air purifier that I tested a couple of years ago – the DH-JH01 seems like a miniaturized model of the LV-H133. So yes, we are dealing with a white (or black) plastic case covered by a matte finish and all around the body of the air purifier, there are punctured holes for the air intake. This air is forced through a HEPA filter by a fairly large motor and then it’s expelled through the top. Here, the plastic is matte black and the manufacturer has put a pattern that mimics the movement of the fan (quite a common design choice for air purifiers, but it looks nice nonetheless). 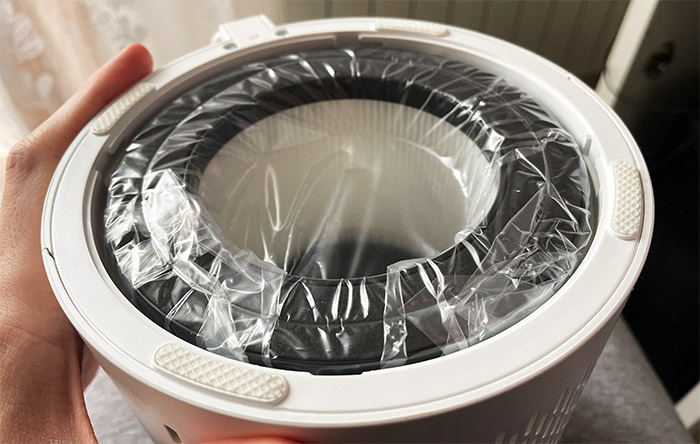 At the bottom, there are four silicone feet to keep the device in place – not that it would move anywhere due to its weight (3.2lbs) – and in the middle, you may notice a weird recessed shape that resembles a handle. And that’s because it is actually a handle which, when moved counter-clockwise, it will open up the bottom-placed lid.
Inside, there’s going to be the aforementioned HEPA filter which should be covered by plastic wrapping. Before turning on the device, make sure to remove the plastic and properly close up the lid (it’s a very smooth process).

I have recently tested another compact air purifier suitable for single rooms (the Partu BS-08) and yes, they’re definitely smaller than the LV-H133, but even so, at 7.3 x 7.3 x 11.2 inches (the size of the Pomoron DH-JH01), it’s still going to take a bit of space from your room. It’s going to most likely end up on some table or shelf and the good news is that it will blend in with the style of most rooms. The design is fairly minimalist and not that flashy, but it can be if you want to because the manufacturer has included an LED light at the top of the air purifier and, when you enable the UV light, the air inlet holes will allow the blue light to shine through. Sure, it’s a nice visual effect, but I would keep the purifier away from eye sight while the UV light is activated. 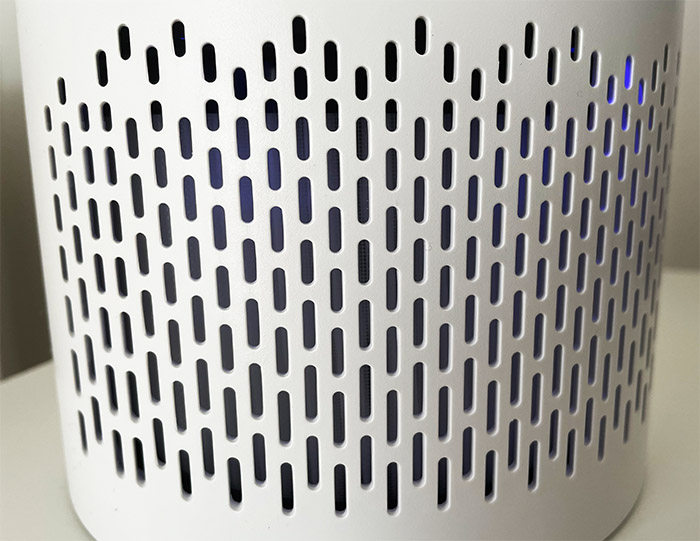 Moving to the top, we get to see a narrow plastic bar that almost fully goes from one side of the case to the other and that’s where you can find all the touch-sensitive controls, as well as the section where you can add essential oil. The controls bar is divided into three areas and be aware that you have to tap on the icons and not on the LEDs (it’s a bit counter-intuitive at first, but it makes sense afterwards). The first section will start the air purifier and will allow you to toggle between the three available speed modes (press four times to turn off the Pomoron DH-JH01). Next, you get to enable the top LED light on one tap and the UV light with two taps. Lastly, there’s the section where you can set a timer for when the air purifier will turn off. At the end of the plastic bar, you can push outwards to open up the lid and pour a few drops of essential oil. 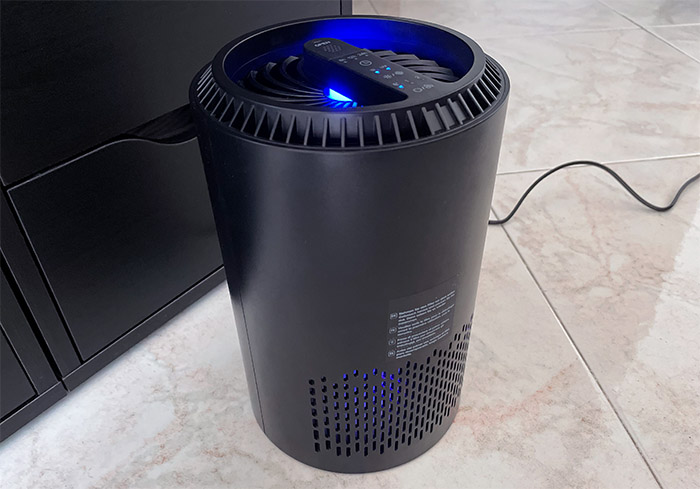 Similarly to the Partu BS-08 air purifier, the Pomoron DH-JH01 is suitable for cleaning the air of a single room (since it’s about 215 sq feet, it could work with a living room + kitchen open space as well) and the clean air delivery rate (CADR) is a bit over 100m³ per hour. Sure enough, you could try it in larger areas, but it’s not going to be very effective (even assuming that the area is properly sealed from outside, it will still take a very long time to move such a large volume of air, so it’s better to just get a bigger air purifier). 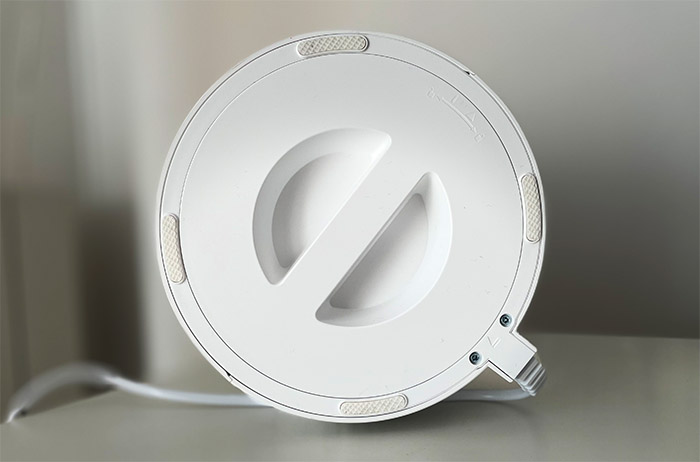 As I already mentioned, the DH-JH01 relies on a single HEPA filter and there doesn’t seem to be any pre-filter (for capturing larger particles) or an activated carbon filter (for removing the bad odors), it’s just what seems to be a true HEPA filter. The manufacturer says that it should be able to capture particles as small as 0.3 microns (PM 2.5) and, while I can’t really test this claim, I can say that I did have less allergies after the air purifier did its job for a few hours.

The problem is that allowing such a device to operate for 24 hours a day will augment significantly the power bill, right? The manufacturer says that the DH-JH01 has a rated power of 17W, so I decided to hook up a measurement tool (a Gosund smart plug) and check the values that it measured.

Sure enough, Pomoron says that the DH-JH01 is silent and that the noise ranges between 22dB to 49dB, depending on the fan speed level that you choose. I saw a slightly different performance using a small sound measurement tool. While the air purifier was in Sleep mode, I saw that at about 4-5 feet away from the device, the tool showed an average of 37dB, which is quite a bit above the advertised 22dB. Using the level 1 fan speed mode, the tool showed 46dB and, at the highest level, it showed an average of 51dB, so both these modes aren’t suitable for when you are sleeping. 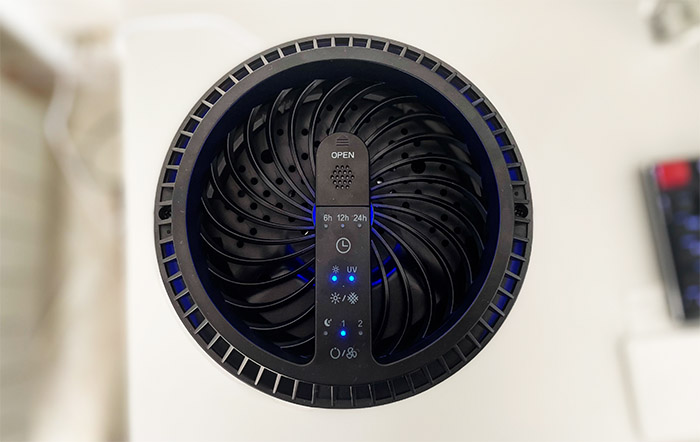 The Sleep mode is not as quiet as I have liked, but then again, if you’re a person that likes to sleep with some white noise in the background, then there’s some silver lining. What about the replacement parts? Are they easy to find and do they have an acceptable price tag? The DH-JH01 has only one replacement part and that’s the HEPA filter, and yes, you can find it on any major online retailer, without costing more than any other HEPA filters.
Since the DH-JH01 is also available under multiple brand names, it could also suggest that at least one company will continue to support this device for a very long time. The air purifier has a timer that will notify you after 2,000 hours that you need to change the filter – the device will continue to function, so it’s just a suggestion.

The Pomoron DH-JH01 is a decent air purifier to cover a smaller space and yes, I would have liked to see multiple types of filters, but considering the price tag of the device, we do get a HEPA filter and an UV light, so I guess it should be fine in most cases. The device doesn’t occupy much space, the LEDs look cool and there are spare parts available, so, if you’re in the market for a compact air purifier, do give the DH-JH01 a chance. 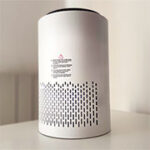