The GoVoce VC100 is a compact smart car charger which, besides offering two USB ports (yes, not all cars have them available, especially the older models), it adds voice commands to your car via Siri or Google Assistant. Well, it communicates a bit less with your car and a lot more with your smartphone (be it Android or iOS) using Bluetooth, so you can make calls, set or change the navigation route or play music (this way, you don’t need to use the phone while driving which is not legal anyway).

I know that lots of cars support these functions already and there’s even Android Auto or Apple CarPlay integration (not always free, mind you), both having the role of mirroring the phone interface within the car’s infotainment display. But this is a device created for the large majority of cars that do not have such systems in place and yes, not all people drive a new car, while a lot can’t really afford the newest, nor the fanciest car available. This means that a relatively inexpensive device such as GoVoce can bring your older car to today’s standards, so let’s have a closer look at this smart car charger and see how it works. 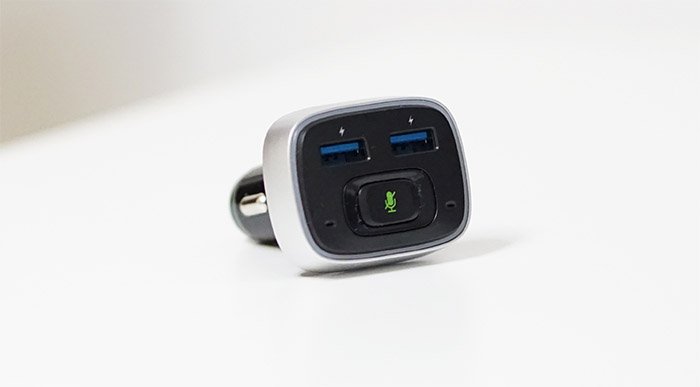 The GoVoce VC100 is not really the only smart car charger available considering that a device such as Nonda Zus exists alongside it, but its functions differ quite a lot, since the latter focuses more towards the integration with the car sensors, reversing camera and more. So, the GoVoce is rather unique in its approach. That being said, the device itself if made of plastic with the elongated piece (the one that gets inserted into the slot) being glossy black, while the front is matte black with a thick silver band in between the two sections. Since the front piece is black, it could have had a seamless integration with the dashboard, but the silver band will make it stand out quite a bit (especially due to the LED).

Even so, it remains relatively unobtrusive considering that it only measures 2.67 x 1.85 x 1.49 inches (6.8 x 4.7 x 3.8 cm) and the protruded section is about 0.8 inches (2 cm). As I said before, you get two USB ports and they’re type-A 5V/3.4A, so no, there is no support for quick charging or anything of the sorts, but it’s still a welcomed addition if your car lacks any USB port. I would have liked to see at least a type-C port since most smartphones, even the inexpensive ones do come with a USB-C port nowadays and you don’t always get a type-A to type-C cable in the box. 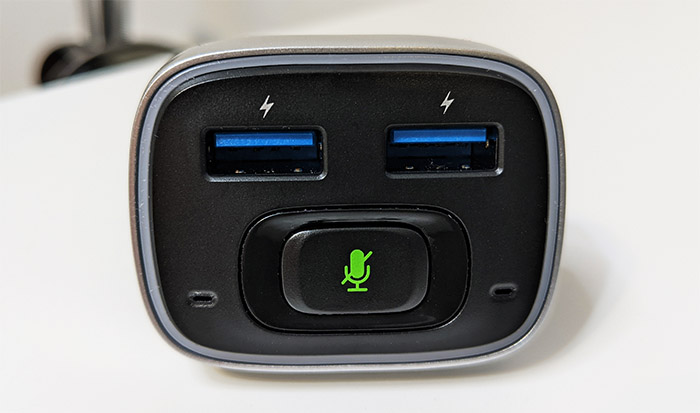 Underneath these two ports, there is a larger button in the center and two microphones on the sides (one on the left and one on the right). These microphones are there to ensure that your voice is going to be heard a lot more clear regardless of the amount of noise in your car. It’s true that the newer cars have put a lot more thought towards the sound isolation, but the older ones may lack a bit in this regard, so GoVoce seems to rely on a built-in DPS (Digital Power Station) to run the microphone BeamForming feature (it should be able to focus towards a specific type of sound) in order to suppress the background noise, allowing it to pick out your voice even if there is loud music playing in your car. To check if it works as intended, I went to my car and inserted the GoVoce into one of the two power outlets (the device supports between 12 and 24V). The charger LED should start flashing blue waiting for you to pair it to a mobile device.

I attempted to pair it to a Google Pixel 2 XL and, while it did see it, it failed to connect to the GoVoce. I assumed that the reason is the lack of compatibility with Android 11 OS, so I took a Huawei smartphone that was using Android 10 and the pairing and the connection worked properly (GoVoce will also work with iPhones).
The instructions manual says that I should set the FM radio in the car to 89.3MHz (apparently very important for the device to work properly) and to have the Google Assistant (or Siri) installed and running in the smartphone (which is sensible). After all conditions are met, the LED on the GoVoce should become solid blue and, to activate the smart assistant press the large button once to give the vocal instructions.

This way, you can play music from Spotify (or other similar service), send a message, make a call, configure the navigation and more (). Since one of the highlighted features is the excellent call quality due to the microphone system (and other tech), I decided to make a call and see if the person on the other end will hear me properly. 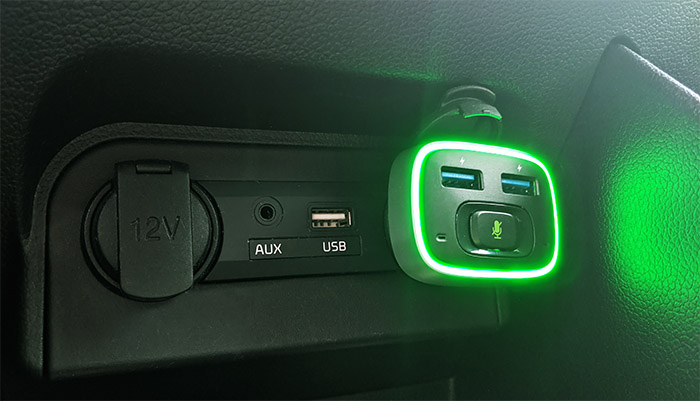 The good news is that it does work as intended and the person on the other end of the call said that I sounded very similar to when I was put on the speaker using a decent smartphone. Be aware that when you make calls, the LED turns green and the smart charger should automatically connect to the car’s speaker system. The button on GoVoce has additional functions, so, you can click and hold it for two seconds to Mute the sound (the LED will cycle through red and purple) and, to disconnect the smart charger from Bluetooth, press and hold the button for 8 seconds.

GoVoce is a very unique device even among the available car smart chargers due to its ability to bring voice commands to an older car that most likely will lack Bluetooth, as well as any of the now expected modern features. Of course, it doesn’t have the smart assistants built in, so you will have to rely on your smartphone to gain the smart functions. Even so, the device works as intended and I was impressed by how well the the microphones behaved, considering that my voice was clear even when there was some noise inside the car. Furthermore, there is no complicated system in place and at a single push of a button, it simply takesAndroid 11 OS away the unnecessary risks which are taken when operating a phone while driving. 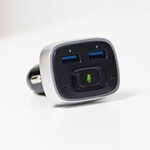