The Huwder A1903 is a PPS PD fast charger capable of outputting up to 150W using its four available USB ports and there really aren’t that many high-power chargers available on the market, yet. That’s mainly because fast charging hubs have a hard time keeping the temperature low and an output of 100+ W is difficult to manage.

Surely, the GaN technology is capable of fixing this problem, but it is still slowly being adopted by the mainstream manufacturers – I recently had a look at a 100W GaN charger and it performed impressively well. 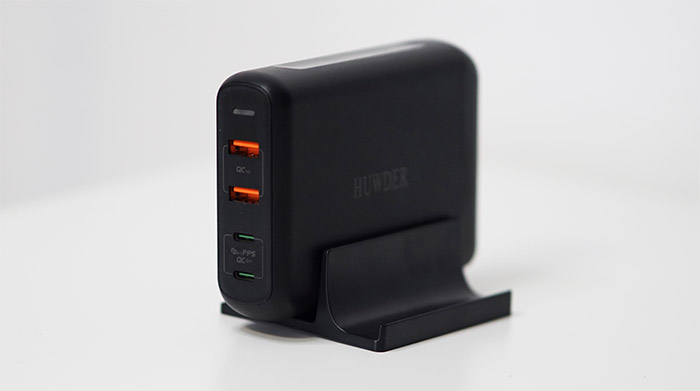 The Huwder has no yet adopted the GaN tech on its 150W fast charger (at the moment of the writing), but it has still designed the device in a manner as to provide a balanced output to your devices, while keeping the temperature under a certain threshold. And, as an interesting fact, the 150W charger was indeed independently developed by Huwder (not that there is anything wrong with OEMs).
That being said, the Huwder A1903 does get very close to the regular laptop charger, especially due to the three-prong connector (includes grounding, which is a rarity in this type of device), but design-wise, it is still smaller, a lot more portable and the manufacturer has added a base to help keep the charger upwards.

Indeed, the Huwder A1903 measures only 4.4 x 3.2 x 1.1 inches or 11.3 x 8.1 x 2.9 cm (sure enough, a bit more than the GaN chargers, such as the 100W Baseus) and the case is made of hard plastic, mostly covered by a black matte finish, with some glossy parts to improve the look of the device. Surely, it’s not ordinary plastic, we’re dealing with flame-resistant polycarbonate and flame-resistant ABS. If you intend to take the charger with you on a trip, it’s easy to just slip it into a backpack, but I doubt it will fit well into a large pocket and that’s mainly because of the cable. 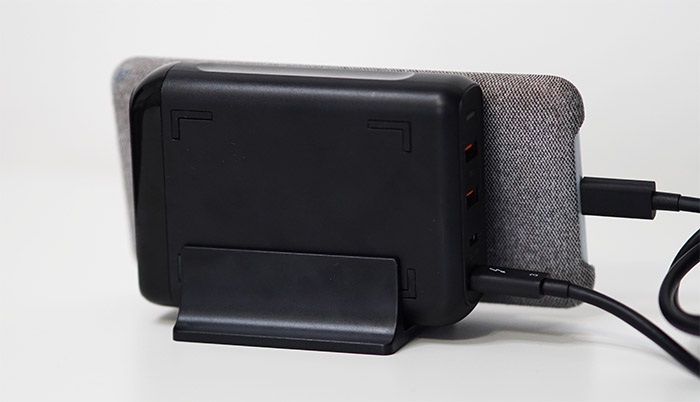 Huwder understood well that most people will leave it standing on the desk, so it added a plastic base where you can slide the fast charger and, on its side, there is a dedicated space where you can put either a smartphone or a tablet. And you don’t have to worry about tipping it over because the Huwder A1903 has a bit of weight to itself – 13oz (367g) not including the cable. On the rear side of the device, you will be able to find the three-prong receptacle (grounded) which completely removes the chance of touch current and limits the potential digitizer interference. Furthermore, Huwder has added protection against short-circuits and there’s over-current and over-voltage protection.

I noticed that there is also some protection against overheating put in place, so, in case it exceeds the higher permitted limit (which should be along the lines of 203 degrees F or 95 C), the charger will limit the output until the temperature gets lower. The front of the Huwder A1903 is occupied by a fairly large LED (which is not incredibly bright, so it won’t disturb during the night) and it’s going to light up green and will stay lit until you disconnect the device from the power source.
Underneath the LED, there are two USB 3.0 ports that support QC 3.0 (each with a maximum output of 22.5W, but if all ports are being used, the output gets limited to 18W each port) and further down, there are two USB-C ports that support PD 3.0, PPS and QC 4.0+. 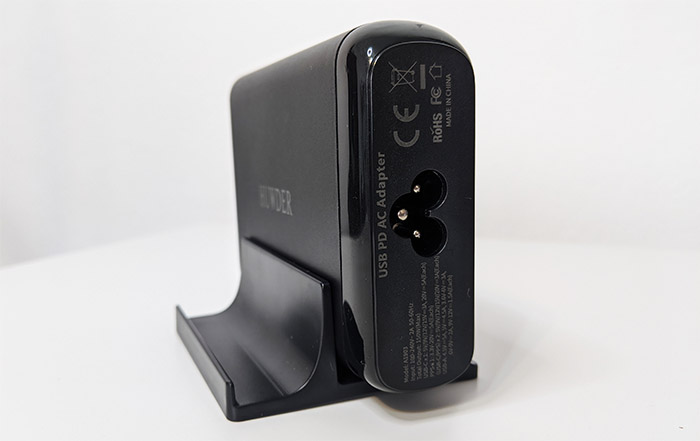 The Power Delivery 3.0 does not change the charging rates of the PD 2.0, but it is designed to have less of a negative impact on the battery and it can identify the type of device it is charging, as well as get more info (such as the temperature, the type of battery, the voltage handling and more), to make the fast charging more efficient for multiple devices. The PPS protocol is an addition to the PD 3.0 and it’s a great way to keep the energy loss (heat) to a minimum by first maintaining a fixed current rate and gradually increasing the voltage, followed by the adjustment of the voltage to a fixed rate and gradually reducing the current (source of the info). The QC 4.0+ from Qualcomm is not the latest available protocol (that would be the version 5), but the only significant difference between the two generations is the support for 100W+ charging power which is not necessary for the Huwder A1903.

If you use one USB-C port, the default output is 100W, but, if you decide to use both USB-C ports at the same time, then the load will be divided between the two ports. I know that, ideally, to test the performance of the USB-C ports it is better to use a 16-inch MacBook Pro which has a 96W power adapter, but I only have a 13-inch MacBook Pro, so that should suffice to get an idea about the Huwder A1903’s capabilities. Be aware that the cable does matter and the manufacturer says that if you do want to charge a 16-inch MacBook Pro, you should make sure that there is support for 5A, otherwise, the charger will simply output 45W (3A).

For the testing part, I took the results that I got using the original Apple charger and then confronted them with the results that I got with the Huwder A1903. So, charging the 13-inch MacBook Pro (2017) with its original charger, I saw a stable 20.31V and the amperage was very much solid, going from 1.183 to 1.185A, but the power output was about 24W. Using the Huwder A1903, things were far better, which is surprising for a third-party charger. I saw 20.11V with the amperage going from 2.432 to 2.435, so very stable and close to the original charger, and the power output was about 49W which means that the MacBook would take far less to go from 0 to 100% than when using the Apple charger.

Next, I kept the laptop connected to the charger and attached a smartphone (a Pixel 2 XL) which showed a stable 9.09V, but the amperage was less stable, going from 1.051 to 1.460 – the power also fluctuated between 11.5 to 13.2W. The original charger showed a solid 9.06V and the amperage was between 1.33 and 1.35 (the power output at an average of 12W). Keeping the MacBook connected to the Huwder A1903 fast charger, I switched the smartphone with a powerful powerbank from Baseus (connected to the secondary USB-C port) and that’s when things got a bit weird because the charger seemed to disconnect all devices for a brief moment (about a second or less) and I think the reason was to calculate the power output. 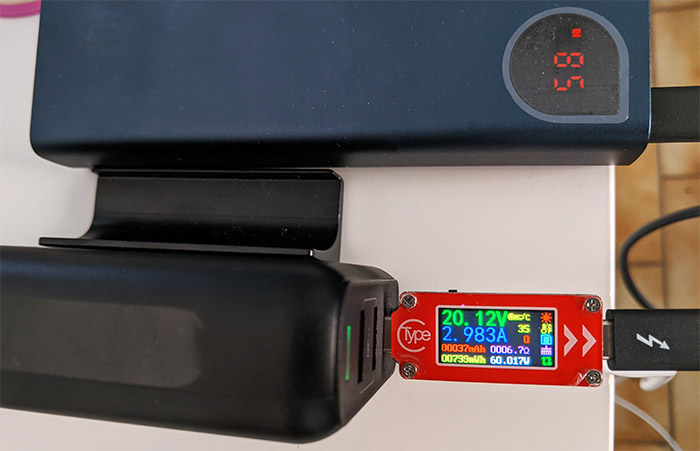 So, it is not very suitable for devices that require continuous power output, such as a Raspberry Pi. That being said, I still saw an impressive 60W power output, 20.12V and the amperage remained solid at 2.98 – it’s nice to see a 20,000mAh powerbank recharging the last 15 percent in less than 10 minutes. Lastly, I kept the two devices connected to the fast charger and relied on one of the two USB-A 3.0 ports to connect the Pixel 2 XL.

This way, I could see a stable 5.06V, the amperage between 1.292 to 1.297A and the power at an average of 6.5W. So, Overall, the Huwder A1903 is an impressive fast charger and, to my surprise, it seems to be better than the default Apple charger.
Note: The A1903 fast charger that I got is CE, FCC and RoHS certified. 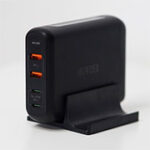