The Hyphen-X 100W is an ultra-compact GaN charger released by a fairly new company, so the users will undoubtedly be a bit more cautious about whether their expensive devices will not be negatively impacted by the charger. Especially the Apple products and yes, the MacBooks are one of the primary targets of these high-power-output quick chargers.

The Hyphen-X 100W does use the GaN technology, so it should ensure that the device is operating at a lower temperature than the regular quick chargers, despite outputting 100W on a single port. And there is some protection against overcharging, short-circuit and more, so, technically, the GaN charger should work fine, with damaging your expensive devices. But, of course, we will put it to the test to confirm it. 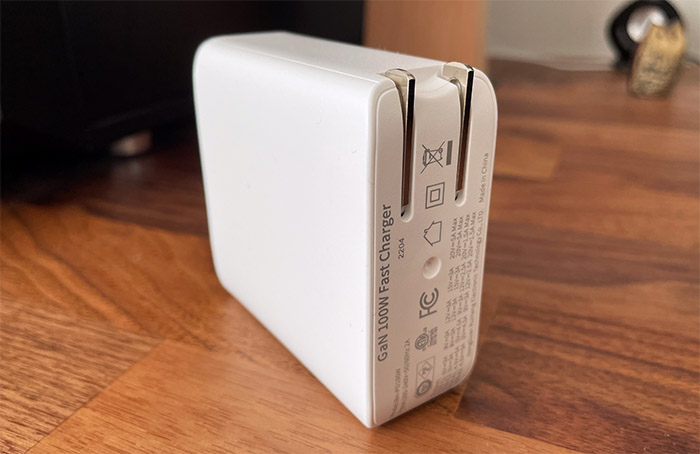 The Hyphen-X 100W charger has a compact case covered by a white matte finish, with two USB-C ports and two USB-A ports on one side, while the other side is occupied by a retractable plug. This way, the device is even easier to carry since there are no parts poking out. While it won’t make that much difference when it’s carried in a bag, if you want to carry it in your jeans pocket, it’s going to be more comfortable. And yes, since the Hyphen-X 100W charger measures 2.87 x 2.75 x 1.18 inches, it’s going to fit into the pocket of your jeans with relative ease. I like that these powerful chargers have gotten so small compared to the regular chargers, but the design of the Hyphen-X does remind me of a Kickstarter-backed device, the HyperJuice.

These two chargers are similarly-sized (one would argue that the Hyphen-X is even more compact that the ‘world’s first and smallest 100W’ GaN charger) and they’re most likely sharing some components on the inside as well. I say that because the HyperJuice 100W, the Baseus 100W and the Ugreen 100W also share the same NCP1342 master chip controller, while the last two chargers use the Navitas NV6125 GaN MOSFET.
I did try to open my Hyphen-X unit, but they glue these things like their life depends on it, so I couldn’t pry it open unless I broke it completely. I may still do a proper teardown if there are any requests for it (let me know in the comments). I did check how hot can the charger get using a thermal camera (from the AGM Glory Pro) and, as you can see from the photo, the GaN technology continues to do wonders for these compact devices. 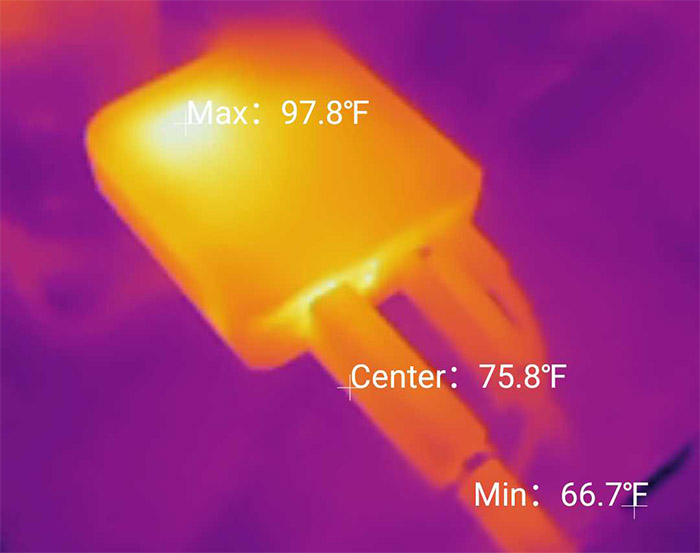 That’s because the transistors can operate at a far higher temperature and, instead of pushing all that heat outwards (to make the room warm..), there is very little energy wasted with the GaN technology. There are a few manufacturers that still postpone the transition to this tech, but it has gotten some serious traction and will soon completely replace the traditional chargers. You know it’s true when even Apple has finally released a GaN charger. Before moving forward (to the tests), I need to mention that the charger does have a small LED which lights up immediately after connecting the device to a power outlet.

And what’s interesting about it is that it will turn off after all the devices are fully charged. Furthermore, I noticed that the two USB-C ports aren’t that well aligned with the plastic case and I had to insert the cables at a slight angle. 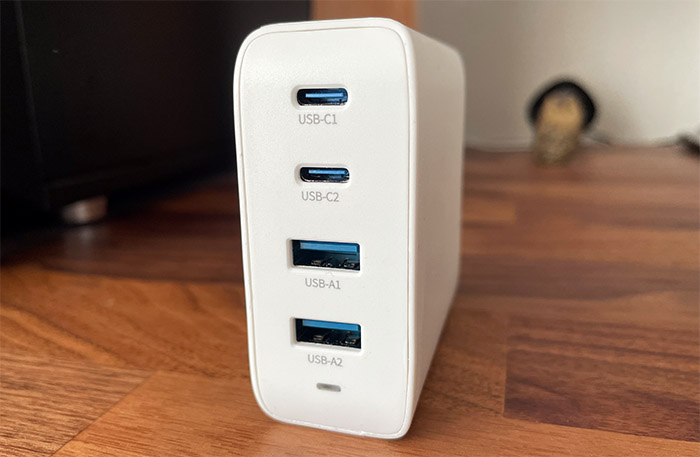 That being said, I decided to check out the first USB-C port (the topmost) which apparently can reach up to 100W, the same as the secondary one, but only if no other ports are being used. I still don’t have a powerful enough laptop to reach that high, so the good ol’MacBook Pro (13-inch) will do once again. I did check the original charger that came in the box along with an Apple cable and the results were good: 20.28V, approx 39W and an amperage between 1.82A and 1.96V.

It seems to be a very good performance, so I decided to also check out the power output of an iPhone 12. With the original charger (from the MacBook since Apple didn’t bother to add one) and the Lightning cable, I saw 8.93V and approx. 10W (the amperage went between 1.2A and 1.7A).

After connecting the iPhone to the Hyphen-X 100W charger (using the second USB-C port this time), I saw that the voltage was stable at 9.14V, the power was approximately 18.5W and the amperage went between 2.02A and 2.23A. These are again, good values since the manufacturer advertises 9V/3A. The power output is higher with the Hyphen-X, so the iPhone should charge a bit faster.

Since I don’t have a secondary laptop that can be charged using a USB-C cable, I was unable to push the charger to its 100W limit. But do know that if you connect two power-hungry devices at the same time to the two USB-C ports, then the topmost port will get limited to 65W and the second one to 30W. As for the USB-A ports, if used only one, then the output is limited to 30W and to test it, I decided to use a smartphone, while keeping the MacBook Pro and the iPhone connected to the USB-C ports.

The values that I got with a small multi-meter were 7.05V, 12.8W and the power output went between 1.75A to 1.81A. This USB-A port will be limited to 18W in case you use both USB-C ports and will get further capped to 7.5W if you decide to use all three other ports. Be aware that the first USB-C will also get limited to 45W, while the second to 30W. While I was connecting and disconnecting devices, I realized that the Hyphen-X 100W charger did not briefly disconnect any of them (as it happened with Kovol Sprint 120W and the Ugreen GaN X 100W), so that’s a bonus. Also, there is built-in protection against short-circuit, from overheating, over-voltage and, of course, overcharging. Lastly, I need to mention that if left idle, the charger does seem to consume quite bit of power, so make sure to remove it from the outlet as soon as you’re done using it. 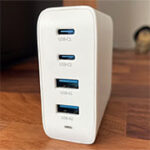