The Kovol Sprint 120W is a 4-port GaN desktop charger and it’s the larger and more powerful model from the series. But you don’t really need to worry about the size because the newer charging technology ensures that the devices remain compact, can deliver more power and most importantly, they do so efficiently, without overheating.

So yes, GaN is without a doubt one of the best technologies that was developed in the last few years, if only it would have been quickly adopted by the tech giants. But no, companies such as Apple still lag behind and the decision to completely remove the charger from iPhone boxes has allowed the third-party manufacturers to seize the opportunity and push their own chargers into the market. I have already tested a 4-port Desktop GaN charger about a year ago from RAVPower, but it was a smaller 65W device and, ‘incidentally’, they also have a 120W available as well that looks a lot like the Kovol Sprint charger. 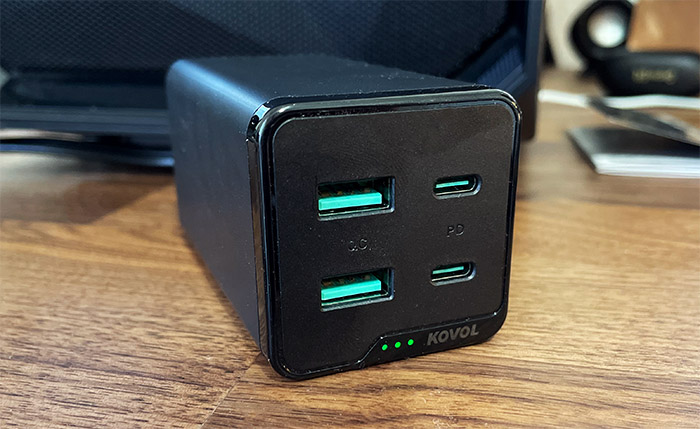 This shows that the competition is fierce at every level and the Kovol Sprint 120W needs to deliver an excellent power output, as well as perform well enough to persuade the users that it can safely replace the brand chargers. And so far, I can attest that pretty much every GaN charger that I tested has proven to be suitable for Apple products (which have been perceived as more sensitive in regards to the power input). Since we’re dealing with a desktop charger, the Kovol Sprint 120W consists of two separate parts, one is the rectangular plastic body and the other is the detachable cable which has a two-pin connector. The cable is 5-foot-long (1.5m), so it can reach to an outlet that’s farther away and it does have a wrap to keep everything tidy. The rectangular case of the Kovol 120W charger is covered by a soft finish and on the front, the manufacturer has added a glossy frame that surrounds the four ports.

At the bottom, I noticed that there are three small LEDs and initially I thought that it’s just to let you know that the charger is powered, but why use three dots? It’s apparently purely for aesthetic purposes and nothing more (it does look good). The charger is quite compact considering that it can output 120W, measuring 3.35 x 1.81 x 1.81 inches (8.5 x 4.6 x 4.6cm) which is identical to the RAVPower 120W (are they the same device?). 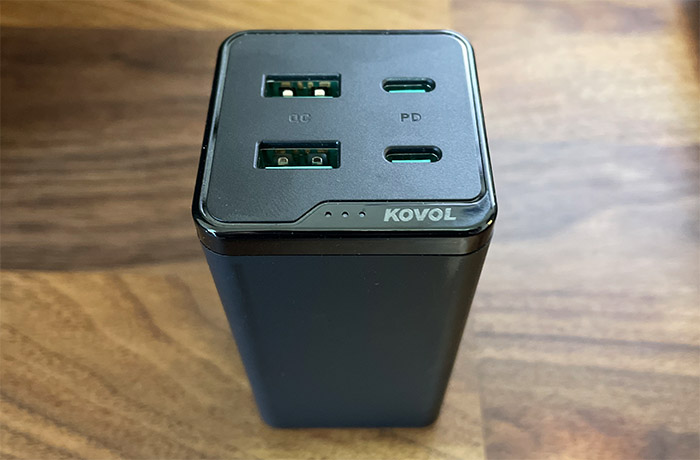 The reason why it managed to remain so compact is because of the GaN technology that uses transistors capable of operating at a very high temperature, while also requiring less space (less components) and being far more efficient than the previous chargers. That’s why instead of wasting the energy into heat (why the older charger would get hot to the touch), the GaN chargers should only get mildly warm. To confirm that the Kovol Sprint 120W charger does not get hot, I took a thermal camera (AGM Glory Pro smartphone) and you can see the results yourself. It is absolutely ridiculous that even if it’s charging four devices at the same time, it doesn’t even get that warm to the touch, so yes, the charger is working as intended. 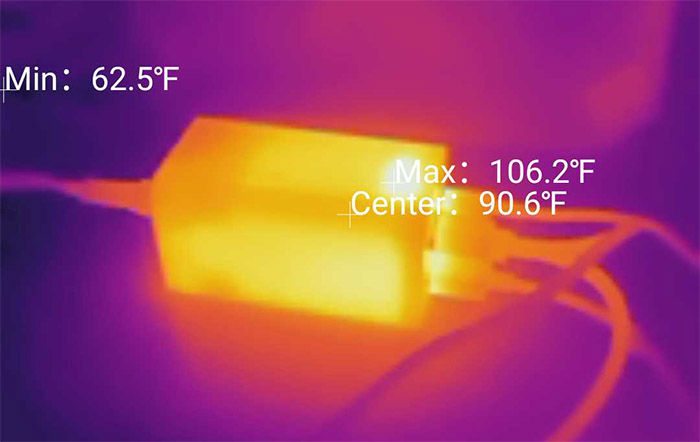 The Kovol 120W charger has two groups of ports, first, there are two PD USB-C port and secondly, there are the Quick Charging USB-A ports. The PD ports have the following output ratings: 5V-3A, 9V-3A, 15V-3A, 20V-5A, each port being able to reach up to 100W. The QC ports can each reach up to 18W and the power output values are the following: 5V-3A, 9V-3A, 12V-1.5A. The two USB-A ports apparently use the Q-Pulse tech which offers protection from high-temperature, overcharging and it has short-circuit protection as well.

Since a lot of users that have Apple products will be more conscious about the type of charger they use (since iPhone come with none), I decided to use an original Apple charger as a point of reference along with an original Apple cable. The charger and cable come from a 2017 13-inch MacBook Pro and, as you can see from the photo, the aforementioned laptop needs about 39W to recharge (while I was browsing the web). I also saw a stable 20.28V and the amperage moved between 1.82 and 1.96A.

With these results in mind, I connected the MacBook Pro to the Kovol Sprint 120W charger using a Thunderbolt 3 cable and the power input stabilized at about 37W. Furthermore, the voltage was very stable at 19.68V and the amperage fluctuated between 1.84A to 1.96A.

To keep things interesting, I decided to continue and add three other devices, one at a time and see if anything changes. I noticed that the useful, but still annoying power output budget estimation still disconnects devices for a brief moment in case I added or removed a device. After connecting an iPhone 12 (that did not have a full battery) to the secondary USB-C port, there was no change with the MacBook connection (the power output remained solid at 38W). Afterwards, I connected a Sony camera and a secondary smartphone, the AGM Glory Pro and the values for the first connection remained unchanged.

This means that the 120W value is indeed true and, as advertised, it’s very much possible to charge two 13-inch MacBook Pro at the same time. Of course, I had to check the power output of the USB-A ports and using the same aforementioned smartphone, the multimeter showed a bit over 9W, a solid 6V and the amperage moved from 1.56A to 1.61A.

Lastly, I decided to check the performance of the charger with an iPhone connected and I already have the data when using the original Apple charger + original Lightning cable. And it showed a solid 8.93V, 10W and between 1.2 and 1.77A.

The Kovol Sprint 120W had a different set of values because I saw a steady 5.1V, while also delivering between 8W and 9W of power and the amperage moved between 1.44A and 1.74A.

So, does this mean that the Kovol 120W charger is more efficient that the original Apple charger? It does seem so. 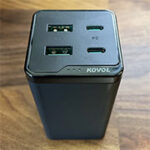