As the title says, AGM will soon launch the newest member of the H series, the AGM H5. And, if you had a look at some of the latest rugged smartphones that AGM has recently released, you will notice that the manufacturer went for a curiously large speaker positioned on the rear side. If the speaker on the H5 is anything like what’s installed on the Glory Pro, then expect it to be very loud, reaching up to 110dB. The best effect is going to be when you keep the phone with its rear side up. Surrounding the speaker, there seems to be four cameras, so there’s at least one macro camera and, if we’re lucky, the thermal camera that we saw on the AGM Glory Pro may make an appearance here as well. 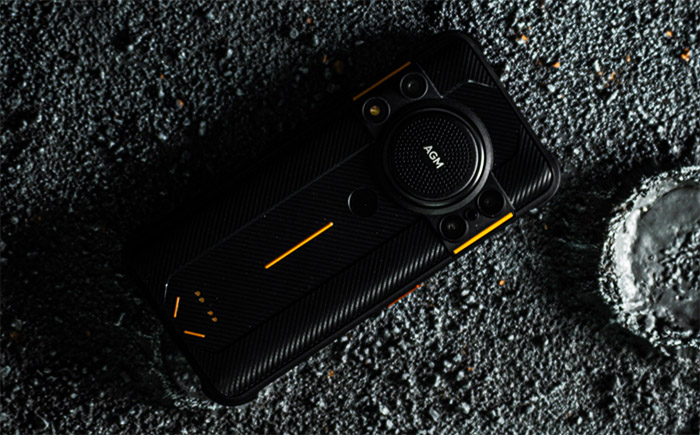 The entire case seems to be made out of fiberglass (or at least partially), and again, the Glory Pro did use some weaved-in fiberglass to increase the device’s ruggedness.
Judging by the photos, the AGM H5 will have a large display and there is a protective lip around it to protect the screen from mechanical shocks. I am sure that all the certifications and military standard tests will be carried on to this rugged smartphone as well, as it did along the latest models from the H series. The (soon-to-be) previous model, the AGM H3 passed the IP68 & IP69K & MIL-STD-810H standards and it had a larger 5,400mAh battery, so the expectations remain high for the latest model as well.

One of the highlights for the AGM H5 is that it’s going to be an early adopter of the Android 12 which was made available to the manufacturers about a year ago. And, unsurprisingly, none of the rugged smartphones received the update (nor will, most, if not all of them).

So, if you want the Android 12 experience (stock version), then you need a new rugged smartphone (such as the AGM H5). The Android 12 comes with a better UI (more dynamic), a privacy dashboard to see what your apps are doing on your phone, the approximate location (again, an improvement for privacy) and a few more interesting additions. From what I could gather, AGM seems to be the first smartphone brand to have released a rugged smartphone on the market, the AGM Rock V5 (in 2011), so they have more than a decade of developing rugged devices. The AGM H5 will go on sale in mid April 2022 and, at the moment of writing, there have been no mentions of the price. But, if we’re to go by the price tag of the other smartphones from the series, the H5 should be far more affordable than the flagship AGM Glory Pro.