The Naenka Lite Pro are the better equipped variant of TWS earbuds that the Chinese manufacturer has made available a few months ago and I have noticed that it does come with a few new technologies, some of which are not yet adopted even by the more expensive brands.

The first interesting addition is the support for Bluetooth 5.2 but, besides the lower power consumption, Naenka didn’t seem to have taken advantage of any other BLE-related feature (still no multi-point connection for the inexpensive earbuds), but it does have support for aptX and AAC, so it’s possible to listen to higher quality music (the format, not the taste). The second highlighted feature is the Game Mode which has the role of improving the Bluetooth connection with the host device with the end result of reducing the latency (by up to 50%). 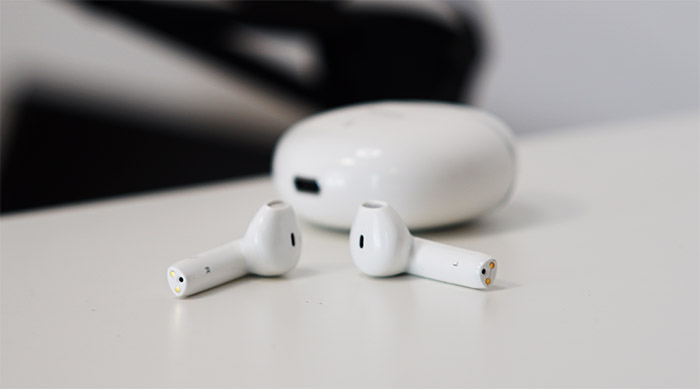 This is not the first time this technology has been used and I have seen it on the Redmi Airdots S as well (it was also enabled by three taps). Still, it’s a nice feature to adopt in this price bracket, especially when it’s incredibly difficult to stand out in this overcrowded and insanely competitive market. It’s worth mentioning that while the charging case is small and fairly unique-looking, the earbuds are clearly inspired by Apple’s Airpods, but since there is apparently a heavy demand from the users for these type of TWS earbuds, let’s check them out and see if you should consider purchasing them.

Before having a look at the earbuds and the charging case, I do have to mention that Naenka has designed the package as a gift box and this can be seen as a bonus if the earbuds are indeed intended as a gift for someone. That being said, the Lite Pro earbuds look very similar to the first generation of Airpods from Apple, sporting the same pea-shaped main body with an elongated neck, so, overall, it very closely resembles the traditional wired earbuds. The lack of silicone eartips are another factor that the Naenka Lite Pro has in common with the the Apple Aipods and, while the passive noise isolation does suffer a bit since the earbuds aren’t shoved in the ear canal, the Lite Pro do feel far more comfortable.

So, yes, you don’t have to constantly readjust the earbuds which means that there is zero chance of ear canal irritation (and you can hold them for longer before experiencing any discomfort). The earbuds are covered by a white glossy finish (again, similar to the Airpods), but there is also a black variant available – this is true for the non-Pro version as well. 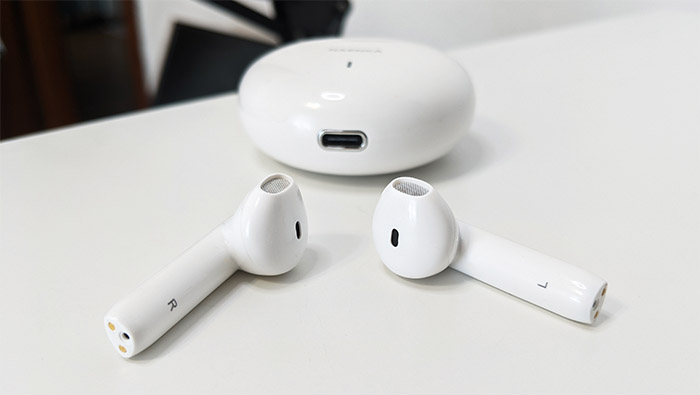 Each earpiece measures 1.4 x 0.6 x 0.2 inches (3.6 x 1.6 x 0.5 cm) and weighs 0.13oz (3.8g), so they’re very similar to the Choetech BH-T01, another Apple-inspired pair of TWS earbuds – they’re not really that small but, again, they’re comfortable enough to make the size irrelevant. Each Naenka Lite Pro bud has a couple of charging contacts at the end of the elongated neck (they’re magnetic) and towards the top, there’s a narrow LED indicator and the touch-sensitive multi-function button. I have been conditioned by other brands to assume that the LED would flash red and blue before you pair the earbuds to the phone, but this is not the case with the Lite Pro, because the LED will simply flash white while waiting to be paired. The touch-sensitive area will allow you to play or pause a track by tapping twice on any earbud, to go to the next track by tapping and holding for 2 seconds on the right earbud and to go to the previous track by tapping and holding your finger for a couple of seconds on the left earbud.

There’s also the possibility to increase or decrease the volume by tapping once on the right and on the left earbud. You also get the option to activate a voice assistant by tapping three times on the left earbud; of course, there’s the possibility to answer calls by tapping twice on any earbud (or reject a call by tapping and holding on any earbud). Within the touch-sensitive area, there’s a small microphone for noise filtering and a front microphone for recognizing the human voice. The charging case is very small (not the smallest I have seen though – that honor belongs to BlitzWolf BW-FYE5) and it measures 2.2 x 2.2 x 0.9 inches (5.5 x 5.5 x 2.3 cm), so it’s very easy to carry around in the pocket of your jeans. The case lid opens easily and if you have long and narrow fingers as I do, you’ll have no trouble taking these earbuds out from the charging case, otherwise, it may be a bit challenging. 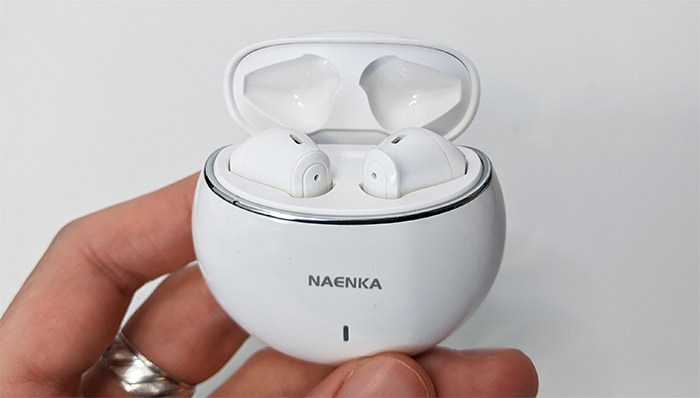 Other than that, the case has a USB-C port and there is a single LED to show you how much battery is left: red means less than 30 percent, blue means between 30 and 60 percent and green indicates that there is more than 60% of battery left. It’s not a difficult system and it makes sense after you read the print, but I admit I was initially very confused by the various flashing colors after I took the device from the package.
Note: The Naenka Lite Pro TWS earbuds are IPX5 rated, so they’ll do fine during the rain or with sweat from an intense workout.

I really like that Naenka has been very upfront with the hardware specifications, so we know that we’re dealing with the Qualcomm platform (QCC3040 SoC) which has integrated ANC, voice assistant support and the TrueWireless Mirroring tech. While the Siri support is the only enabled feature, there is also the Bluetooth 5.2 which should be more power efficient than the previous versions and there is support for the aptX and AAC codes. This way, you can have a better sound quality, although don’t expect to hear it from listening songs on YouTube. Naenka also pushes forward the use of a 13mm dynamic driver which is a bit larger than what I saw on most other similarly priced TWS earbuds and could technically translate into a fuller sound and better clarity at a higher volume.

That being said, I decided to pair the Lite Pro earbuds to my smartphone and check the sound quality. The pairing process is identical to other TWS earbuds: take the Naenka Lite Pro earpieces from the charging case and check for the LED to flash white on the right earbud. Next, enable Bluetooth on your mobile device and then check it from the available list. Tap on connect and the earbuds should now be paired to your phone – I also saw the aptX support enabled. 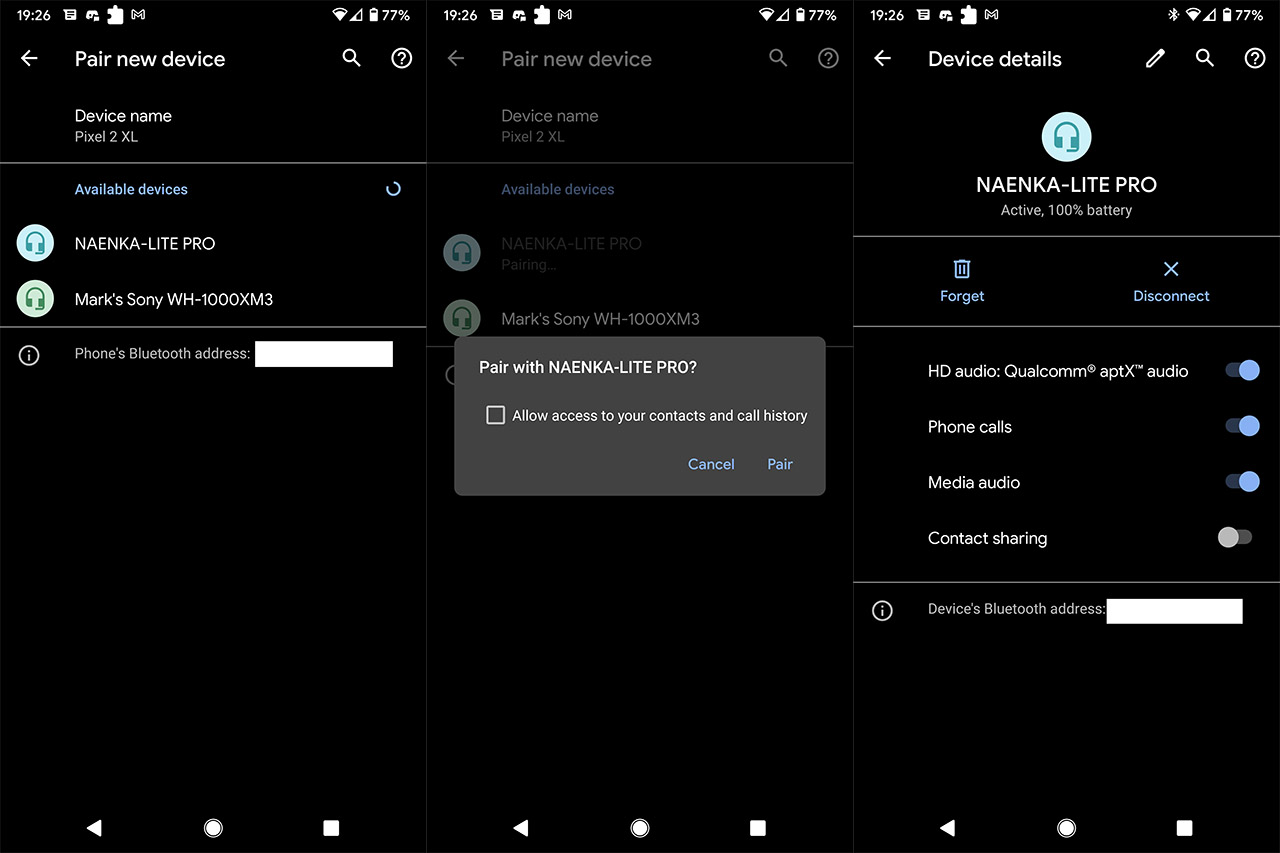 Naenka says that you should experience a better coverage with Bluetooth 5.2 than with the v5.0 or below, but in my testing, all earbuds started having connection problems after about 30 feet (with a couple of walls in between them and the phone, but with the doors open). And that’s regardless whether it was Bluetooth 4.2, 5.0, 5.1 or, the newer 5.2.

The first thing that I checked was the driver quality with a low bass sound and surprisingly, this is perhaps the first pair that had zero buzzing; furthermore, I checked if the sound is central and indeed it did felt like it was coming from the center of my head. The binaural test shows if the earbuds are able to create a good 3d simulation of where all the voices and instruments are positioned and the good news is that the Lite Pro did excellent here as well. But, as with other earbuds that don’t rely on silicone eartips for noise isolation, the environmental sound does creep in, so you may have to crank the volume a bit higher when outdoors or in a crowded place.
While listening to some songs, I can say that the lower deep bass just didn’t seem that satisfying – it’s clear that the manufacturer has put some emphasis on bass, but the deep sounds felt far away (not hollow, just in the distance). The mid and high bass were better defined and felt closer and I could tell apart the instruments. 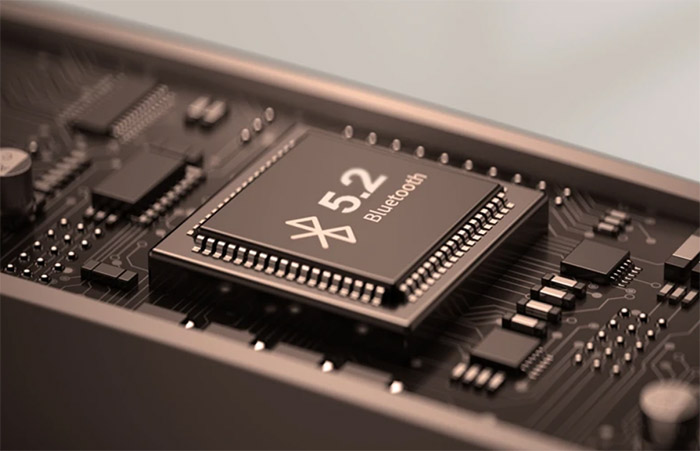 The mids are, as expected, very well defined and very clear and it’s not that surprising since most of the time, this is the main focus of the entry-level TWS earbuds (and the target audience is usually fine with it). The treble is loud and colorful, but if a lot is going on, it did felt like the clarity suffered (got incredibly busy, with little instrument distinction). Again, this is not a bad sound experience, it’s perfectly fine for its price range and far better than some other earbuds that also don’t rely on passive noise isolation (such as TaoTronics SoundLiberty 80). The call quality is good if you’re calling from a quiet place – both myself and the caller sounded clear and no interruptions, but things can get problematic in areas with a lot of noise. The microphones do work hard to keep the environmental noise down, but the lack of a seal with the inner ear will be noticeable.

Now let’s talk about the Game Mode which has the role of lowering the latency between the video output and the sound output. It’s known that there is sometimes a slight lag between YouTube videos and the sound, and things get worse with games especially on the entry-level TWS earbuds. And this is true with the Naenka Lite Pro, since I have experienced a very slight lag between the sound and video of a Stadia game, but not so much with YouTube videos (it was actually completely in sync). Turning on the Game Mode seemed to have improved things a bit, so it’s a useful feature for this particular application, but be aware that it does take a toll on the battery life. I did test the battery life without the Game Mode activated and it was impressive, reaching up to 6 hours and 10 minutes when the volume was set to 70%. With the Game Mode on, it takes about 5 hours before the battery gets depleted. 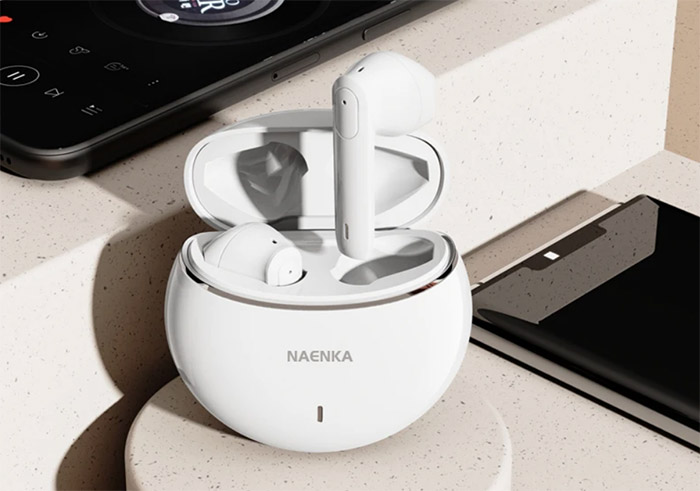 There is a lot of competition in the TWS earbuds market and especially in the price range of the Naenka Lite Pro, but it does seem like the manufacturer has managed to build a very balanced device, ticking pretty much all the right boxes. The charging case is small enough to be easily carried around, the earbuds are very comfortable to wear even for longer periods of time, there’s volume control and the battery life is among the best I have seen on a pair of TWS earbuds. The sound quality is suitable for most people that want to simply consume media (not suitable for audiophiles), so, if you don’t have the budget for the expensive earbuds, then the Naenka Lite Pro is definitely an option that you should take into consideration. 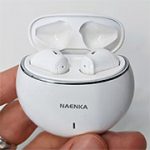