I know that a lot of people now view the LED strips as a mandatory decoration accessory to give their rooms a modern look and why not give into this trend since the LED strips don’t require that much electricity, the color can be customized and, depending on the brand, they should be easy to install.

One problem could be the corners since the LED strip usually comes in a roll and, to put it in a 90 degree angle, you will need to use separate L-shaped extensions and to carefully cut the strip in specific places. In short, it’s a surprisingly demanding DIY project that I doubt most are keen on wasting their time. A solution to this problem comes from NEXillumi which has developed a series of LED light strips which have special areas that can bend without damaging the connectors, allowing you to easily adjust the strip at any angle.

The model that I’m going to focus on is the NEXillumi 13.2 feet (plus the additional 3.2 feet corner cords) which is suitable for larger TVs (up to 75″), but it can also be adjusted for smaller monitors (or TVs) as well – In Europe, you may find the NEXillumi LED strips under the name Mexllex.
Inside the box, you will be able to find a plastic roll containing the NEXillumi LED strip (and you’ll immediately notice that it’s different from the other LED strips from the market due to the black extension cord portions), eight plastic clips (with glue), a larger pad and a small remote control.

I have previously had a look at a couple of LED strips (one from Tasmor and the other from Lumary) and in both cases, I had to rely on a power adapter (and even a power brick) to draw electricity directly from the wall socket. The NEXillumi LED strip is different in this regard (in a very good way), relying on a USB type-A connector to draw power, so a simple connection to a desktop PC, a TV or monitor is all that’s needed (the power source needs to be 5V/1A). After beginning to take the strip out of the roll, you’ll immediately encounter the USB connector which is going to be attached through a relatively long cable to a Bluetooth LED controller. 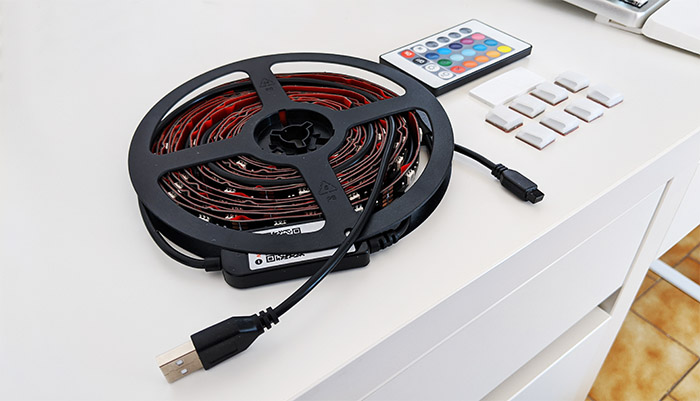 This controller is a small black box (covered by a glossy finish) and there is an info label with a QR code, in case you want to use it to install the associated application (yes, this is a smart LED strip). There are two cables that stem from the other side of the controller, a shorter one containing an HBS838 IR receiver which is useful to operate the remote control (cover the end of this cable and the IR signal will no longer reach it) and then there’s another cable that continues with the LED strip itself. The pattern above the strip is an interesting one since it allows you to cut it every 1.3 inches and, between the cut marks (there are scissors to let you know the area where it’s safe to cut), there is a larger LED and a few other circuits. It’s worth mentioning that unlike many LED strips (which are white), this one is black – the reason is the surface to which it has to be glued on (the back of a TV or monitor which is usually black). 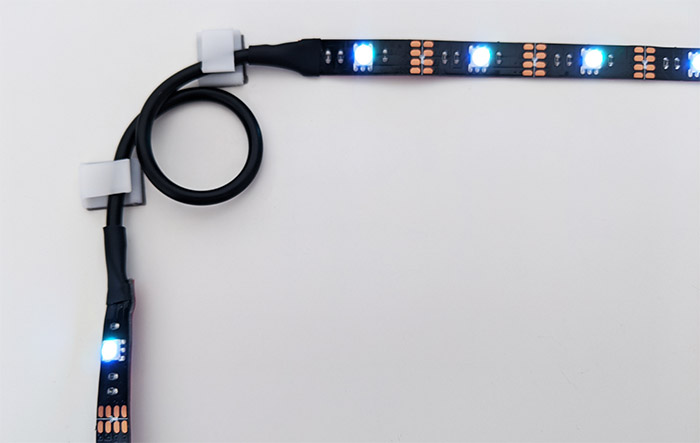 On the other side of the LED strip, there is a red tape that you need to remove in order to attach the strip on the desired surface – the glue quality seems to be decent and because the targeted use is the back of TVs or monitors, it should properly adhere to the surface (I had problems with some cheaper LED strips which were either missing chunks of glue or it would easily fall off the surface). If you install the LED strip on the back of a larger TV, it shouldn’t be too hard to move around the plastic rear, but, on a smaller device, you may have to adjust the extension cables in a loop with the help of the eight plastic clips.

I know that there are some LED strips that are waterproof (they have that transparent protective layer on top of the circuitry), but, since the NEXillumi LED strip was designed to be used indoors, on your electronic devices, it does not need an IP protection. As I said before, inside the box, there is a small remote control (it’s very similar to the one I got with the Tasmor strip) which is powered by a CR2025 battery (remove the plastic piece to let the battery touch the connectors) and it has a few basic functions. 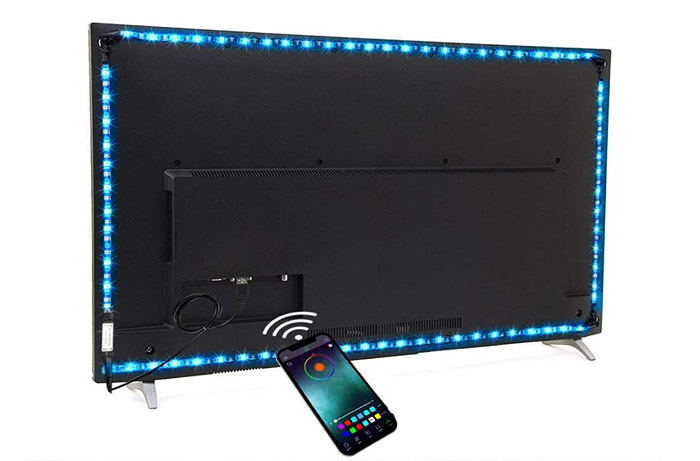 You should be able to turn the strip On and Off, adjust the brightness, change through various colors (be aware that the white is a bit on the yellow side) and there are also four patterns available. But, to get the best out of this gadget, you need to use the mobile application called HappyLighting (available on both Android and iOS). After installing the app from the store, you will have to allow the app to have access to the device’s location for Bluetooth (you should do it only when using the app) and that’s pretty much it, you don’t have to go through some tedious pairing process or anything of the sorts. Just make sure to have Bluetooth enabled and you should be able to control the LED strip.

It has happened a few times when the app would desync and to fix the connection, I had to simply restart the app. The user interface is very color heavy, displaying a color ring in the middle to adjust the RGB LEDs, there’s also a brightness bar immediately underneath, as well as some preset and standard colors. At the top, you get the option to turn On/Off the LED strip, to Manage more than a single device or to change the background image. 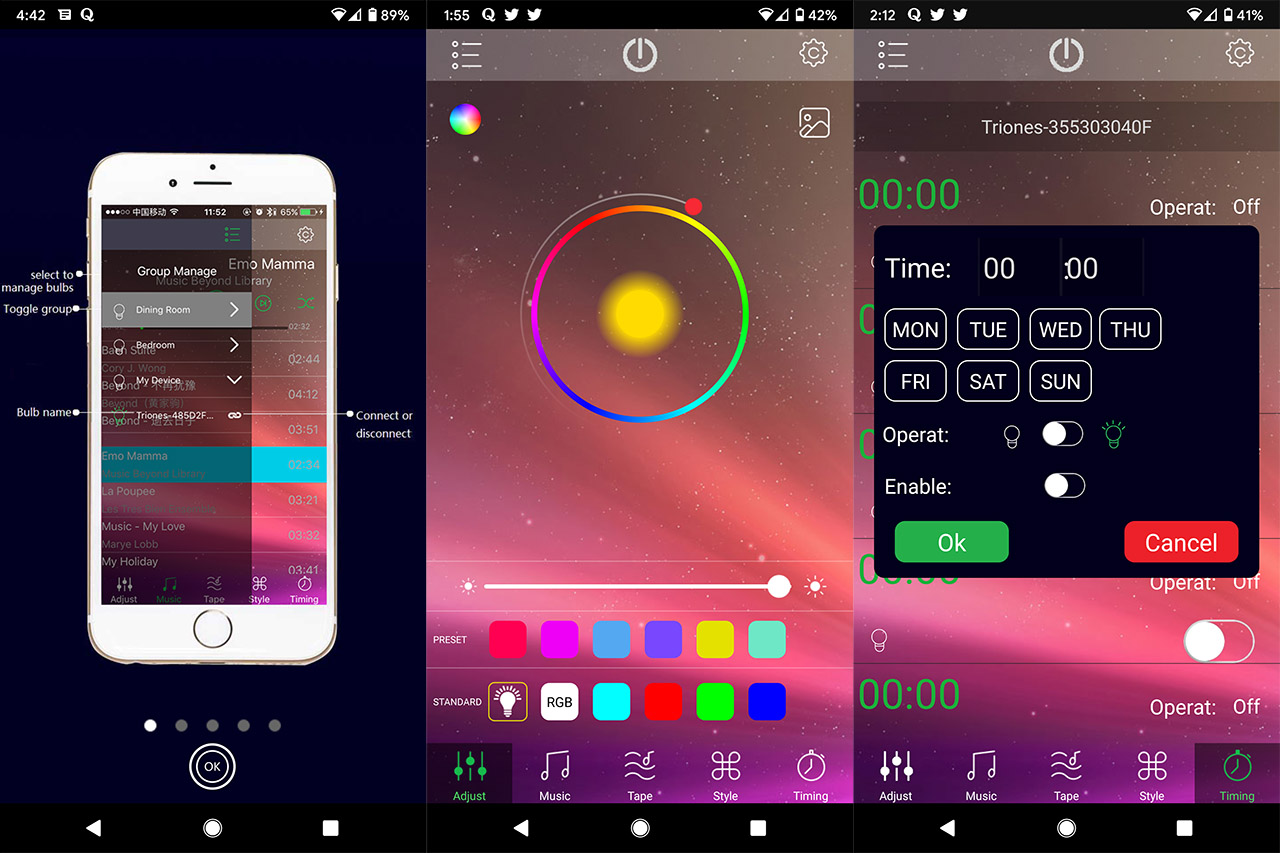 At the bottom of the UI, you will notice that all this time we were on the Adjust window, but you can also visit the Music section, where the app will access your music library (the LEDs will flash in a similar pattern to the music); there’s also the Tape section which will make the LEDs to react to any exterior sound registered by the microphone. The last two sections are the Style, where you can select a specific light pattern from a very large list (you can also adjust the speed) and the Timing which will allow you to create schedules for when the LEDs will turn on or off.

Conclusion
The NEXillumi LED strip light was designed with a very specific use in mind and that’s to be able to be adjusted in any kind of angle, something that pretty much all other LED strips struggle to achieve. It’s true that due to the fairly long portions of cable, you won’t be able to use it on a straight line (such as near the kitchen countertop), but for large TVs or any other similar rectangular surface, there really isn’t anything better available on the market. Besides its angle flexibility, the LED strip also connects directly to a USB port (doesn’t occupy a power socket) and it can be controlled by either using the small remote or the dedicated app so, if you need such a device in your home, the NEXillumi LED strip light is definitely worth taking into consideration. 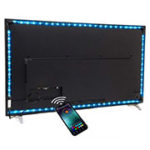