The Onforu smart LED light is a facade flood light, so its main objective is to enhance the look of a house or any other type of building during the night. There is, of course, the safety aspect as well since it can be an effective trespasser deterrent, but the Onforu D30WIFI goes a step forward and it allows the user to personalize the LED light color, the brightness, set schedules and more.

This will come in handy during the Halloween or Christmas, especially for people that aren’t fans of manually mounting those long strings of LED lights. An outdoor floodlight is a ‘lazy’ solution that’s pretty much just as effective during those holidays. But, how easy is it to power them up? The Onforu smart LED lights have a cord and they get attached directly to an outlet which is far from ideal, especially when there are solar panel-powered options available already. 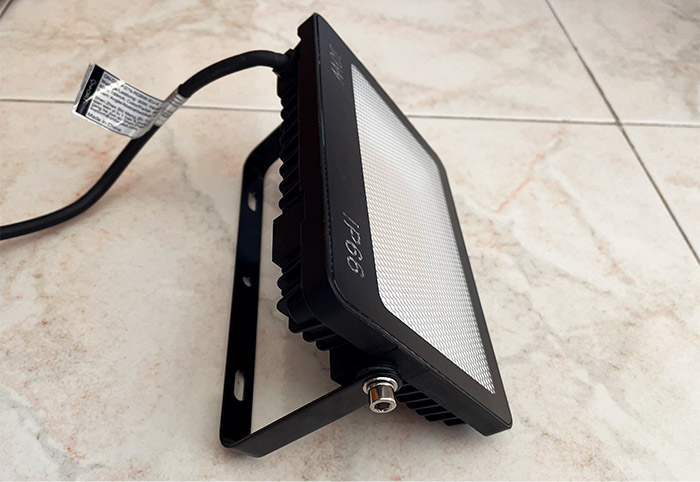 The good news is that just as any LED light, it will consume less power than the traditional flood lights and there’s also the WiFi connection. Indeed, there’s an app that you can use to perform the aforementioned customization and I noticed that there is no external antenna to break the minimalist design of the device. Of course, we need to put it to the test to see how well it performs, so, without further ado, let’s have a closer look at the Onforu outdoor LED flood light.

Since it is an outdoor-suitable LED flood light, the Onforu D30WIFI needed to be designed to withstand the elements. And on the front side, underneath the LEDs, there is the reassuring IP66 written there, so the device should be completely sealed from dust ingress and it should also be protected against powerful water jets. It’s not made to survive water submersion, so make sure that you install the Onforu flood light where the water won’t accumulate after a rain. The device will remain operational when the temperature ranges between -4 to 104 degrees F (-20 to 40 degrees C) and, at first glance, the device does seem rugged enough to survive outdoors. 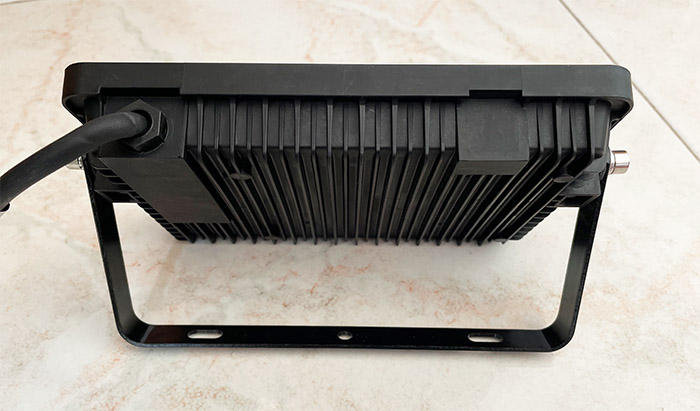 It does have a rectangular case that measures 8.2 x 8.1 x 1.2 inches and the ribbed rear panel helps with the visual impression of a rugged device. Still, the device is actually made of aluminum and it’s just covered by a hard plastic coating. The stand is made of metal and it can technically rotate up to about 300 degrees, but the cable is not going to give you that much flexibility, so 180 degrees is more realistic. And enough to allow you to position the Onforu flood light anywhere outside (or indoors).

I did like that there is a bit of resistance when I moved the stand to ensure that the device won’t easily move from its position and there are lateral screws for additional adjustments using an Allen key (to tighten or loosen the grip). This will work great if you intend to mount the Onforu smart LED light on a wall or flat surface – it is very much possible due to the holes on the stand (be aware that there are no screws in the package). What I didn’t really like is the cable. It’s permanently attached to the body of the device which I guess helps with the water resistance, but why did the manufacturer make it so short and thick? At its 3.28ft, there isn’t that much room for adjusting the position of the flood light, it needs to stand close to the power socket. 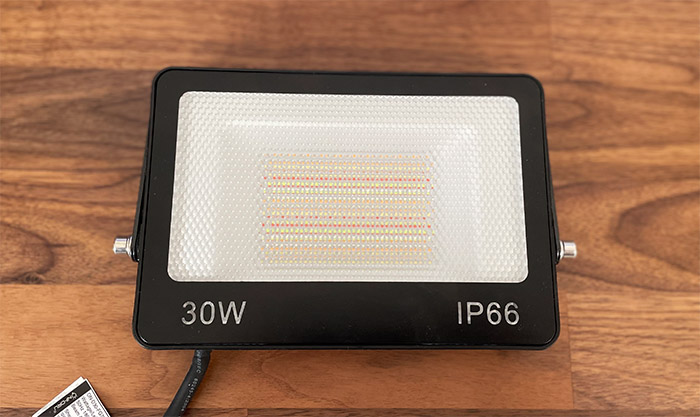 I am a fan of small solar panels for this type of devices, so hopefully Onforu will implement this technology with its RGB devices as well (it will obviously impact the price tag, but the install and forget possibility is very enticing). The front panel is where the magic happens and the Onforu smart floodlight relies on a set of LEDs (sitting in a recessed position) from which the light gets projected and directed through a transparent front panel. That’s a common design approach which I have seen on other similar devices, such as the smart flood lights from NovoStella. Besides the IP66 icon, the manufacturer also decided to let you know outright the power of the flood lights and it’s 30W which is fairly mild for this type of devices, but we’ll put it to the test immediately and see just how well it can illuminate an area.

The App and Customization

Before anything else, you will need to use the app to customize the way the Onforu smart LED flood light will function since there are no physical buttons or a dedicated remote control. The app that Onforu has chosen to use is called Smart Life and it’s an universal one since I have also used it with a Gosund smart plug and a few smart light bulbs (from Gosund and iLintek). After installing it, you’re going to be flooded by permission requirements (I used the iOS version of the app, but there’s an Android one available as well). 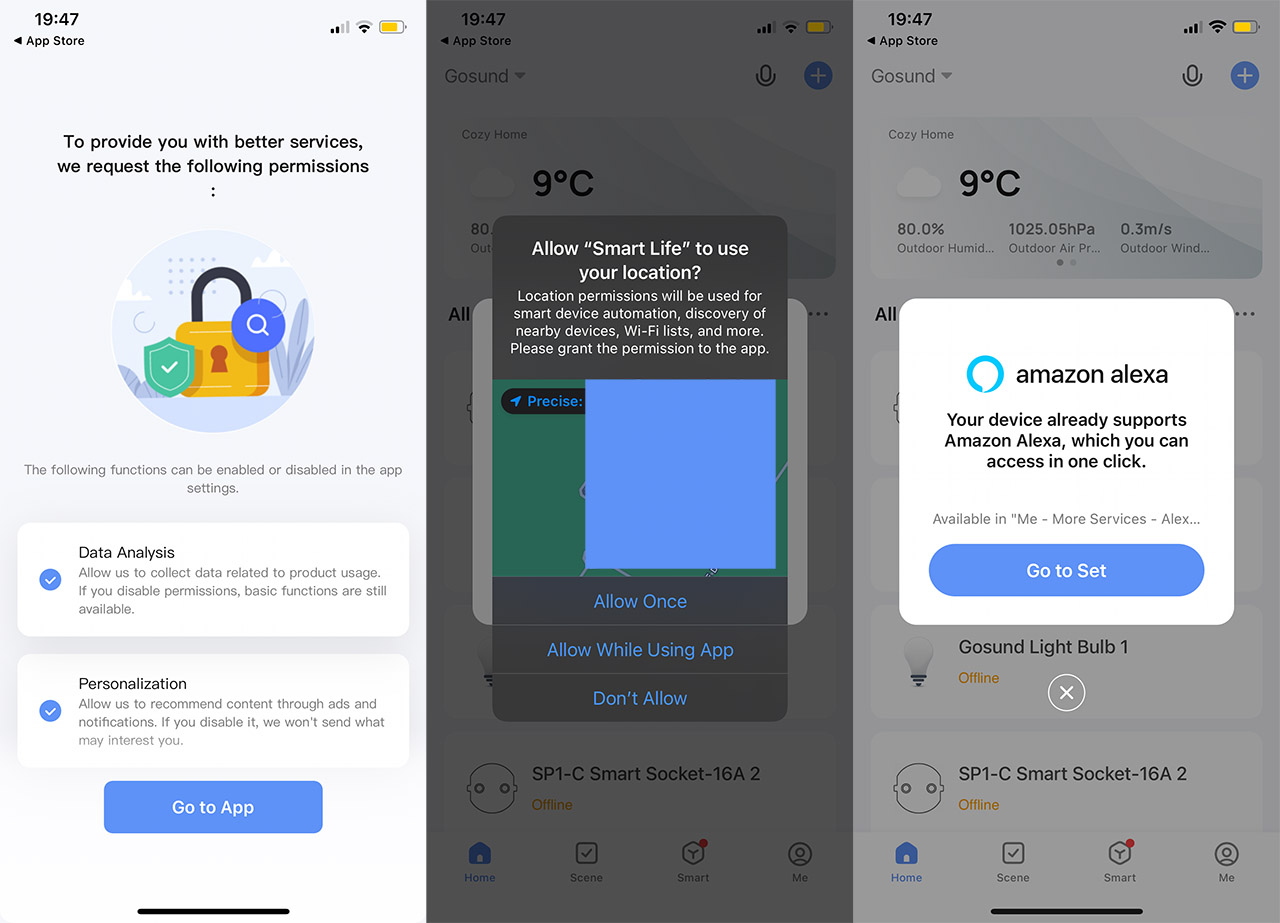 First, there’s the User Agreement and Privacy Policy (includes partnership with third parties which the software developers can’t vouch for), there’s the need to enable (or disable) the Data Analysis and Personalization for ads, the app will also want to use your location (doesn’t need to be exact) and to send you Critical Alerts (which is funny in regards to a flood light). The app will also ask if you want Smart Life to control all Home devices, if you want to use Amazon Alexa and if you want to Receive Push Notifications (from the flood light!). And that’s finally it. I already had some devices added to the app (if it’s the first time you’re using the app, then you will need to create a new account) and to add the Onforu smart LED flood light, I tapped on the Plus sign from the top right corner.

This will summon a list of supported devices and you need to select Lighting > Light Source (Wi-Fi). Afterwards, you need to power on the device and reset it. The reset process is a bit weird: you will have to turn off and on the flood light a few times (three to five times) until the LED starts flashing quickly. At this point, you will be asked to connect to a 2.4GHz WiFi network and the app should immediately detect the Onforu smart LED light. 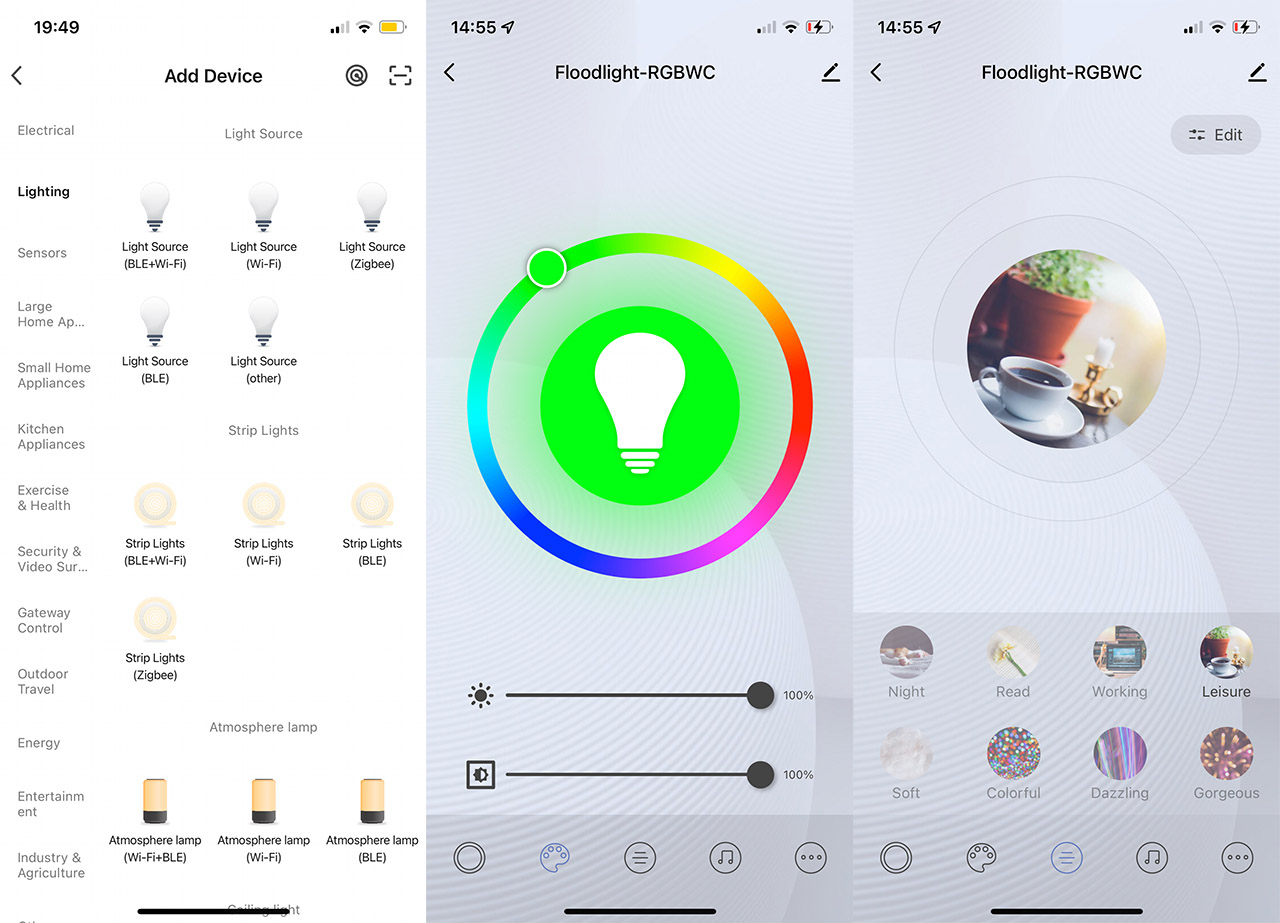 The dedicated UI is very intuitive and simple to use as there’s a large icon for turning the LEDs on or off, while underneath, there are two adjustable sliders, one for the Brightness and the other for the color Temperature. This is the Home tab, but you can select other tabs from the bottom of the page. The second tab allows you to select the color from an RGB ring and the third tab is useful due to its preset color tones – can be Night, Leisure, Working, Soft and more. The fourth tab is interesting because it changes the color in accordance to the sound that’s ‘heard’ by the phone’s microphone. Lastly, the sixth tab allows you to create a schedule for when the flood light will turn on or off – I would have liked a bit more customization for the schedules, but it’s still quite useful in its current state as well.

These types of RGB flood lights usually get used the most during Halloween and especially during Christmas since you get the option to choose specific colors and alternate them in order to either complement the regular string of lights or to replace them altogether.

But, there is also the option to continue using these devices for lighting up the place during the night. The issue is that they eat up quite a bit of power, which is why I am in favor of using solar energy to keep the flood lights alive during the night, even if the light intensity is not that great. To see the power consumption of the Onforu smart LED light, I connected it to a Gosund smart outlet and checked the reading that it displayed on the same Smart Life app. As you can see, when the brightness is set to 100% and the light temperature to 6000K, the power consumption was at an average of 26.8W. 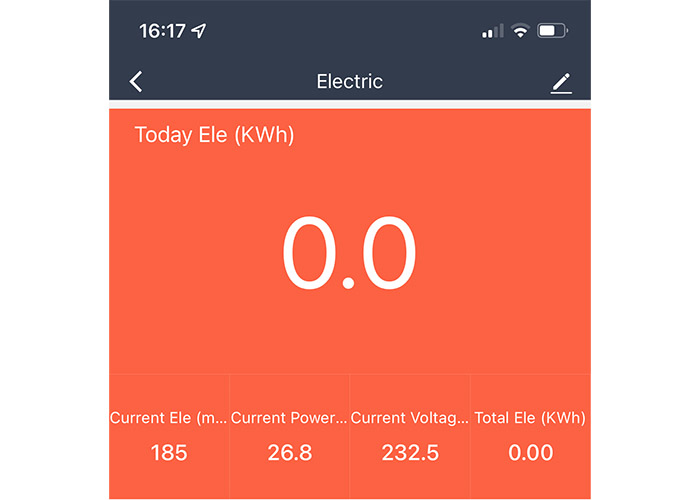 We don’t yet know whether that’s a good power consumption or not until we actually measure how much lumens are offered per watt. That being said, I took a cheap and probably not incredibly accurate (but still fairly useful) light meter and checked the amount of lux that it showed while I was pointing it at the light from the Onforu flood light (100% brightness, the cool tone, 6000K).
And it was 3657 lux or Lumen/m2 which means that it’s well above 100 lumens per Watt, a fairly good performance.

I went outside during the night to see how well these small flood lights would perform and they light up the space quite nicely, especially when positioned close to the house, allowing the light to diffuse along the wall. And I already had some LED outdoor lights installed, but they pale in comparison to the 30W Onforu LED lights. Obviously, there are devices that are far brighter and more intense, but the price scales along nicely and I doubt many need that much light. 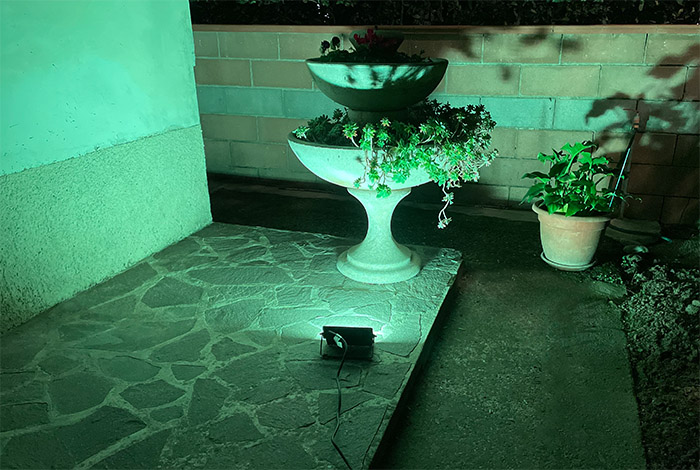 I did see that the manufacturer say that there’s a 120 degrees beam angle and that the color temperature ranges between 2700K and 6000K, so I could definitely put these flood lights to good use indoors as well for some cool photo sessions (for the background). Since we’re dealing with a device that can use a WiFi connection, it’s wise to keep it close to the router and, ideally, it seems that you should not go farther than 50 feet away. That’s with either thin walls or in open space, because the Onforu smart LED lights will need a shorter connection distance with very thick walls (30 feet and four thick walls was the maximum in my case).

The Onforu smart LED flood lights are inexpensive and they do offer most of the expected features. The brightness is good, there is a great amount of customization available thanks to the app and the build quality is suitable for outdoor conditions. I would have liked a longer cable and, if possible a solar panel to remove the cable completely, but, for its price tag, we do get a well performing product nevertheless. 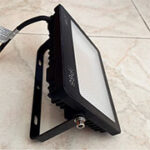