The laptop has undergone multiple changes over the years to become more portable, while still trying to keep a decent performance (as close as possible to its Desktop sibling) and, a few years back, it has branched into two main categories, the ultrabook and the gaming laptop. While the latter are still relatively chunky, the ultrabooks completely migrated from the thick industrial look and adopted a minimalist, full-aluminum body which is a lot more lightweight and thinner than the gaming laptop.

As a consequence, the manufacturers have removed most of the USB ports (the most radical among them being Apple which left its newest MacBook Pro with only two USB ports) and pushed the user towards either connecting its devices via wireless or using a USB hub (how else are you going to connect your peripherals?). 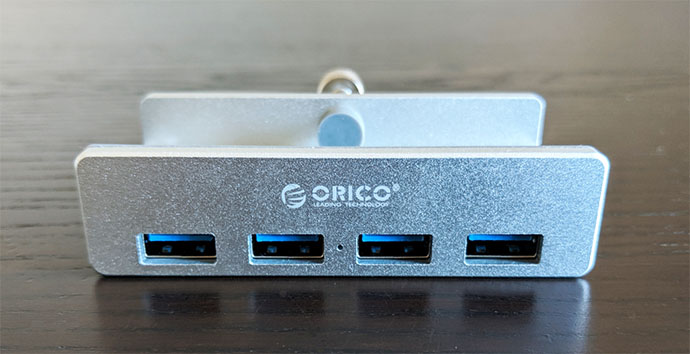 The USB hub is usually a small rectangular device that you carry around in order to connect more devices to your laptop (surely, there are some stationary hubs that have their own power brick), but Orico decided to stand out of the crowd and adopt a different look in order to allow the user to attach it to either a desk or a monitor (this approach is useful if you have a small desk that easily gets overcrowded). Except for the bottom side which is made of plastic, the entire case of the Orico MH4PU USB hub is made of thick aluminum alloy (which should ensure some protection against the occasional tumbles to the ground) and it’s entirely covered by a silver matte finish.

The device itself is still rectangular, measuring 3.5 x 1.8 x 0.9 inches LxWxH (and weighing 28.2 ounces), but, towards the top, it has two fins to allow you to insert a part of the monitor or a portion of the desk. On the rear fin, there’s a hole and inside it, there’s a thick screw (with a stylish design) and at one end, it has a silicone pad (where it gets in contact with the desk). 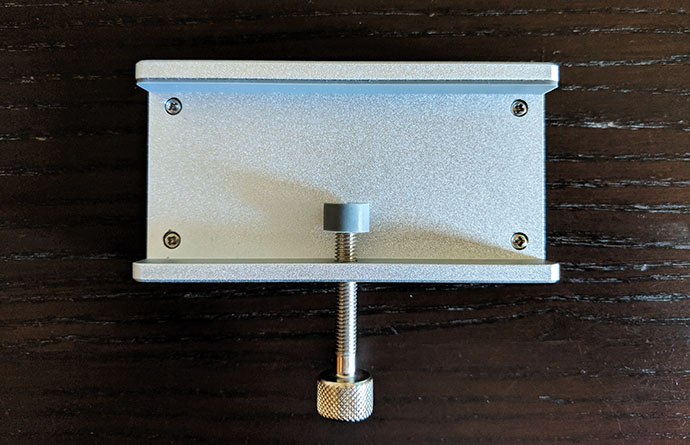 On the opposite side of the screw (on the frontal fin), there’s also a silicone pad to ensure that you don’t scratch the desk or the plastic from the monitor. The distance between the two pads can be as little as 0.35 inches, so I could easily attach it to my Dell monitor and, while the USB hub remained sturdy, the monitor, being made of plastic will have a bit of flex when you insert a new USB cable (you should not force any USB cable inside the ports – it’s better to keep pressure from the back of the monitor). 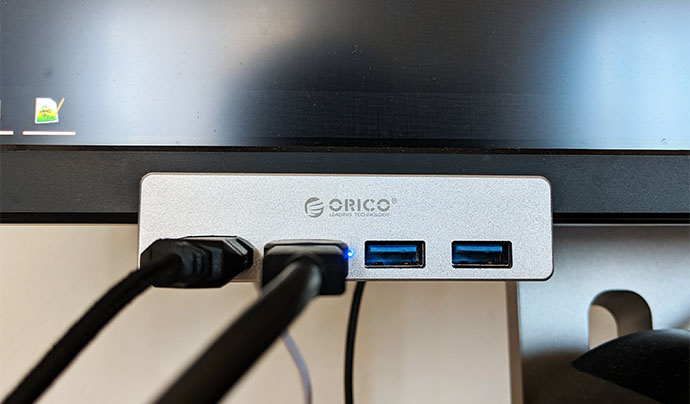 Some of you may want to mount the hub on the monitor of a laptop and for this reason I tried to attach it to my Lenovo laptop and, unfortunately, the gap is just too big for a thin laptop (you can either attach it to the main body or you can use a buffer to limit the space between the silicone pads). On the bottom of the USB hub, you’ll be able to find some printed info about the device (the model, as well as the input and the output), while on the top, in between the two fins, there are four small screws which keep the aluminum body connected to the plastic bottom. 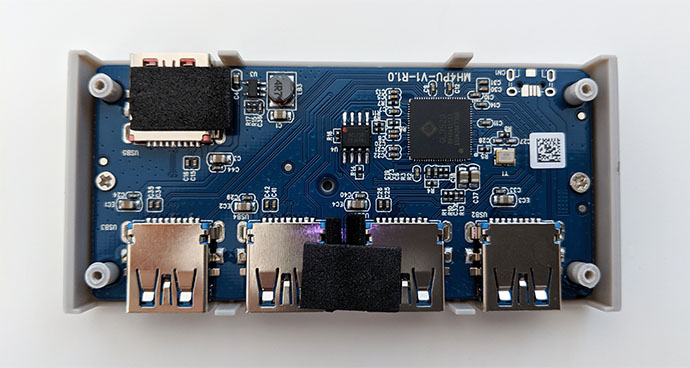 Removing these screws has exposed the internal hardware and I could identify a Genesys Logic GL3520 USB 3.1 hub controller (0V4DA0IY22). When I tested the ZyXel NWA1123-AC HD access point, I noticed that the zinc alloy that the manufacturer used as the top surface was very effective at keeping the device cool even when it was under heavier stress (something that its plastic competitors could not accomplish), so, considering that Orico went with a similar approach (aluminum alloy), I decided to put some stress on the hub and connected multiple peripherals, as well as an external SSD (Samsung T5) and moved some folders around as well as run the CrystalDiskMark 6 benchmark.

Surprisingly, the USB hub did not get hot and only faintly warm next to the USB ports and solely on the plastic area. The results of the benchmark suggest that there is a difference in performance between the SSD connected directly to the laptop and through the USB hub: less than 5 percent in the synthetic reading test and close to 10 percent in the synthetic writing test (it’s normal to see a small amount of performance loss considering that all connected devices share the bandwidth of the hub and the other peripherals that I connected will not take much from the bandwidth). 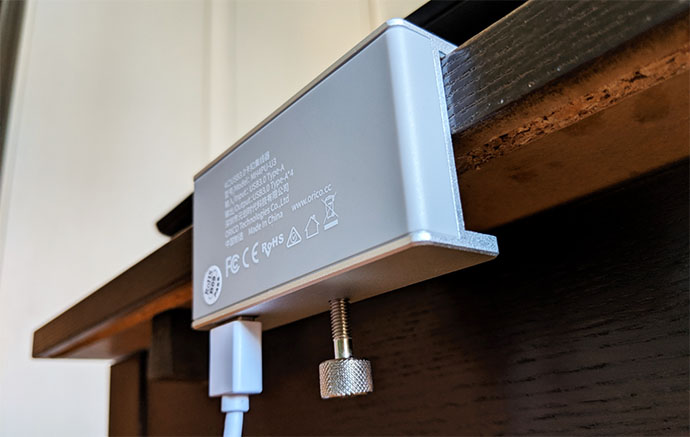 The way you can connect the Orico USB hub to a computer is through a USB 3.0 cable which is provided in the package (it is about 3.2 feet long) and, after the small blue LED lights up, it means that the device is powered on and you can begin connecting devices to the four available USB 3.0 Type-A ports (the process is Plug and Play). No, there is no USB Type-C port or Ethernet pass-through port (such as on the Kensington SD2000P), but that would have significantly increased the price tag. Still, the four USB 3.0 ports do allow you to charge your smartphone (using the laptop’s power), but it’s going to be the slow charge your devices since it doesn’t feature any Quick Charging features.

The Orico MH4PU aims at being a no-frills USB 3.0 hub which allows you to simply sit down at your table and, using a single cable, to connect to all your peripheral devices to your computer. While the port variety is a bit limited, I did like the design concept (there aren’t enough clamp type USB hubs on the market), so if your laptop lacks a healthy amount of ports, then the Orico USB 3.0 MH4PU is definitely worth taking into consideration. 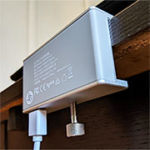