Most of us have a blender inside our kitchen for those occasional smoothies, but did you know that there are also portable blenders available which promise to offer the same functions (such as blending smoothies, shakes or baby food), but with the added convenience of portability, so, even if you go to the gym, you should still be able to quickly mix a protein shake or, if you’re on holidays, you will easily be able to create easily digestible food for your baby, regardless of the location. 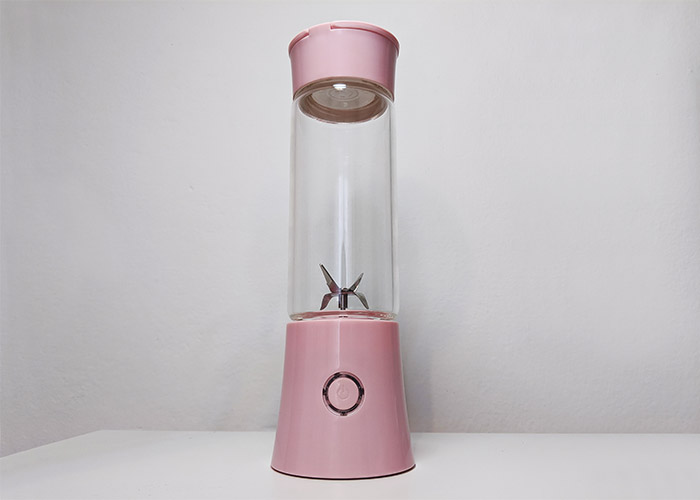 The reason for this is because unlike the traditional blender which gets directly connected to a power outlet, the portable alternative relies on an internal battery which can be recharged using a USB cable. As expected, portability always comes with a cost and in this case, the tradeoff is the power (I doubt a 1000W portable blender will become something common anytime soon – they’re usually between 100 and 350W) and, in some cases, the built quality and the battery life. As expected, the market is overflown by devices of different shapes and power, suitable for all pockets and among the more accessible ones, there’s the Zovcal portable blender which promises to offer everything that a more expensive traditional blender can, so let’s see if it delivers.

Design-wise, the Zovcal blender doesn’t differ that much from the fixed-type blenders, featuring a cylindrical body made of plastic and glass. Some of you may have preferred metal instead of plastic since it’s more durable, but the plastic will allow the device to be more lightweight. The model that I got has the plastic parts covered by a glossy pink finish which does not retain fingerprints, but there is also a white variant available. The non-portable blender usually has the base a bit larger to accommodate the powerful motor, but in the case of the Zovcal blender, the base isn’t wider than the rest of the body, measuring 3.0 x 3.0 inches (LxW) and the entire device is 10-inch tall, so you can easily slip it into your travel bag. 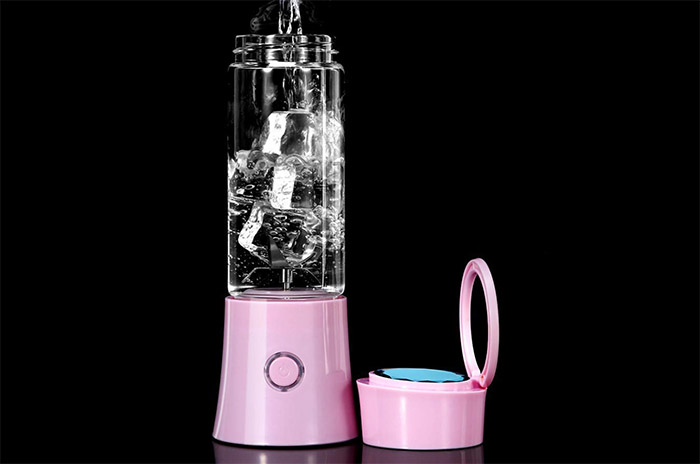 It is also worth noting that the plastic is BPA-free, so you can safely use this blender for baby foods. On the front of the plastic base, there is a large On/Off button with a circular LED surrounding it which will flash white five times after you screw in the glass middle part (if it doesn’t happen, it means that the two parts aren’t properly attached and the device will not start) and, if you press and hold the button for two seconds, the blender will start crushing the fruits or vegetables, while the LED will start flashing blue and white for 30 seconds (the device will stop automatically after 30 seconds and you will need to wait a bit until it gets cool to start it again). 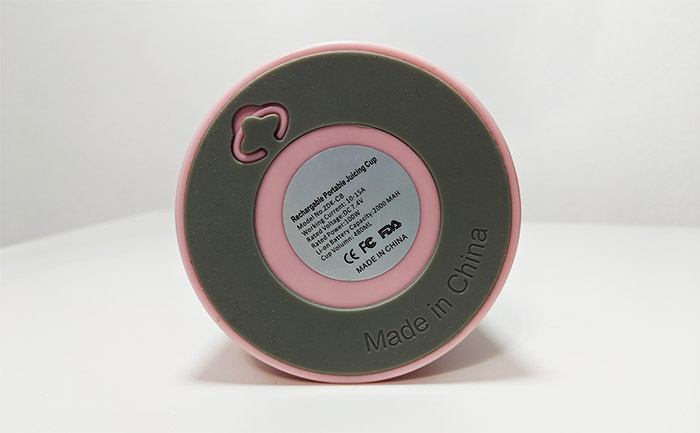 The blender comes equipped with 2 x 2000 mAh batteries which can be recharged using the provided USB cable that gets connected to the bottom of the device, where you’ll be able to find the microUSB port hidden underneath a silicone flap (you have to keep the blender on its side when charging it up and it makes me really uncomfortable since it can easily roll around – to charge it from 0 to 100%, it should take about 5 hours). Besides the port, on the bottom of the base, you will also be able to find a label with various info about the portable blender and a circular silicone band which has the role of keeping the device in place (considering the nature of the blender, it can be tipped over without much effort, especially when empty).

At the top of the base, the Zovcal portable blender has six leaf blades (made of SUS304 stainless steel) and the motor is capable of delivering between 15,000 25,000 rpm; around this area, there’s a canal to allow you to mount the glass section of the blender (it’s Borosilicate Glass Cookware). At the top of the glass cylinder, there is a plastic lid with a nice glass part on the top (has a diamond like pattern on the margins) along with a detachable loop for easy carrying. 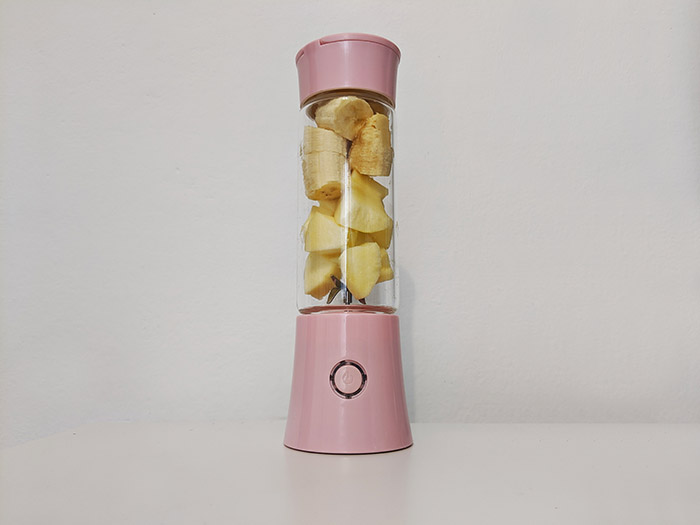 The device’s capacity is 480ml or 16.23oz, so you should get a couple of cups of blended food in one go: I decided to test it using some apples and bananas, and after I cut the fruits in several pieces, I ran the blender which immediately stopped and started blinking white and blue, letting me know that it couldn’t cut through the larger pieces of apple; after I cut the larger pieces in half, the blender was able to successfully break down the fruits and create a paste (it did took a couple of sessions, each for 30 seconds). 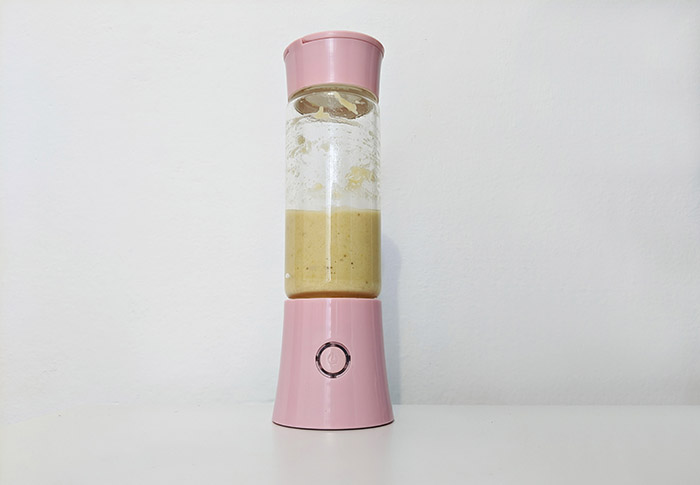 Since its power is rated at 100W, I would advise against putting larger pieces of carrots or celery since the motor will not have the means to cut the vegetables (the pieces would have to be really small). The noise wasn’t too loud and it sounded like an amplified buzzing sound from a bee (about 60dB) and I did like that I could easily put the additional lid to carry around the food and to be able to quickly wash out the base of the device (yes, inside the package, the manufacturer has also included an additional lid which can replace the base after you’re done blending the food). 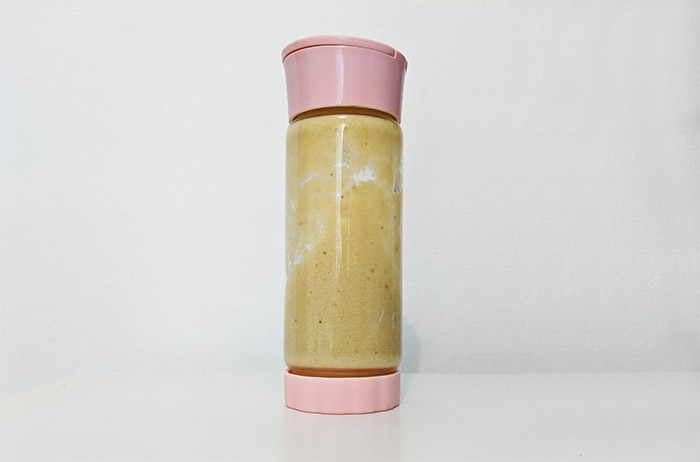 Zovcal says that the device is not dishwasher friendly and you should not use cleaning solutions or attempt to disinfect it using a microwave oven. To properly clean it, use a wet cloth and leave the blender until it’s fully dry before using it again. In terms of battery life, you should be able to use the Zovcal portable blender to mix about 10-12 cups of smoothies (depends on how long it takes to cut the fruits) and as for protein shakes, you could go up to 20 cups on a single charge. 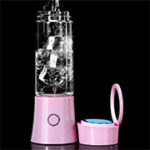