The RAVPower PD Pioneer (RP-PC133) is a 65W wall charger built around the new GaN technology which allows it to remain a lot more compact than the non-GaN chargers, while also delivering a lot more power. That’s how what looks like a regular wall charger can be powerful enough for most ultrabooks, as well MacBooks (yes, even under a heavier load).

And truth be told, Apple is only going to start using the GaN technology sometimes around this year in order to shrink its chargers, so the third-party manufacturers have a solid head start (the Apple chargers were already quite compact when compared to the power bricks that we usually get with some other laptop brands). But despite the GaN technology being quite new, there are a lot of wall chargers available that already use it, so what does RAVPower RP-PC133 have that others don’t? 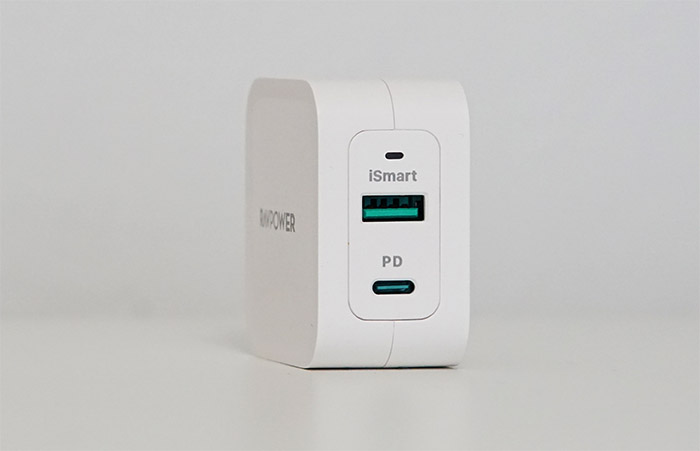 Besides the type-C port, the device does have an additional USB type-A port and RAVPower uses what it calls the iSmart technology to adjust the power output in order to make it suitable for multiple types of products (the device also includes protection from over-voltage, overcharging, overcurrent and short-circuit).
Note: Just like the Choetech Q6006 wall charger (that I recently tested), the RAVPower PD Pioneer 65W is available with multiple (but non-removable) plug types and, while the EU and the UK variants are fixed, the US charger does have the plug retractable – everything else is the same.

The basic expectations from a wall charger is to be as unobtrusive as possible and to have at least a port for the cable that will go to your devices. The RAVPower RP-PC133 is perhaps not the most unassuming charger since the manufacturer decided to cover it entirely with a white finish (it’s glossy on the sides, but it does not retain fingerprints) and if we ignore the green ports, it does look like it could have come from Apple. As expected, the case is entirely made out of plastic and after I took it in my hand, it is heavier than I assumed – it weighs 4.8 ounces, so it’s very similar to the Choetech 61W charger and considering that the RAVPower PD65W charger measures 2.4 x 2.3 x 1.5 inches, it’s just as portable. It’s going to easily fit in your backpack or purse and, considering that the point of this device is to leave any other chargers at home, you shouldn’t have any trouble to tuck it into a smaller pocket when you’re traveling – if you’re in the USA, then you will get the version that has a retractable plug, so it’s even easier to carry around. 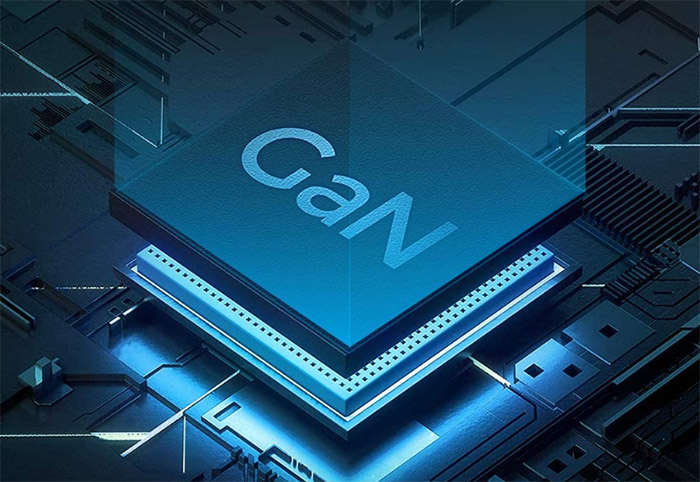 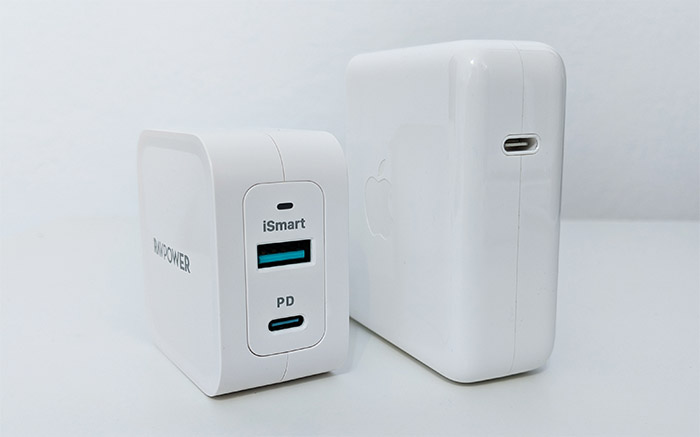 To put these claims to the test, I decided to use a couple of multimeters, one for the USB-C and the other for the USB-A port and I checked the measurements when trying to charge up a Google Pixel 2XL (which supports QC 2.0) and a MacBook Pro 2017. As can be seen from the photos below, I took the original charger that came with the Pixel 2 XL and, using the multimeter, I saw that it delivered a sustained 9.06V (the amperage fluctuated between 1.16 and 1.36A) with the target being 9V – the detected mode was QC 2.0.

When I connected the phone to the RAVPower 65W wall charger, I saw that the voltage went from 9.13 to 9.15V (while the amperage went from 1.13 to 1.63A) which was fine considering that it remained well underneath accepted 5% deviation.

Afterwards, I took the MacBook Pro and again, I watched the multimeter display while the computer was connected to the original charger and as it was charging (otherwise, I would see just about 5V, as it happened when I tested the Choetech 61W wall charger). This way, I could see that the original Apple charger delivered about a stable 20.28V (with the amperage ranging between 1.63 and 2.11A) and it’s very important to mention that the target was 20.3V, so the charger was very close to ideal.

When connected to the RAVPower wall charger, I saw a stable 20.09V when the target was 20V, so it’s a fantastic performance (as for the amperage, it ranged between 1.56 and 1.63A). Lastly, I decided to connect the Pixel 2 XL to the RAVPower charger via the USB Type-A port, so I connected another multimeter to the port and saw a stable 5.13V (the detected mode again seems to be Quick Charge 2.0). 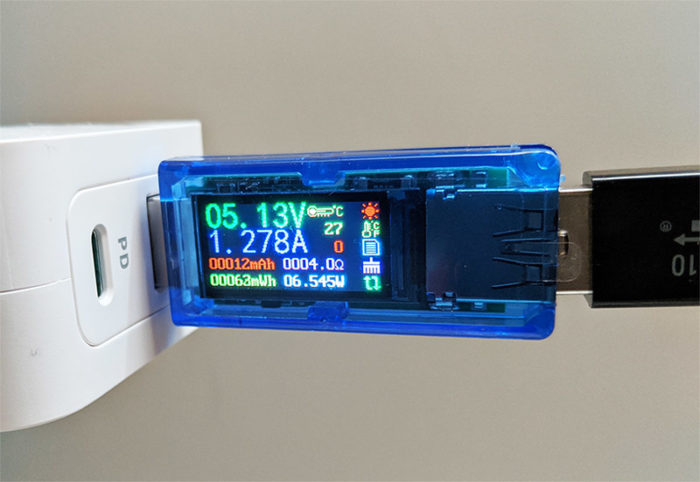 Ideally, I would have two devices that can force the charger to its limit, but I only have the two aforementioned devices available for this test and the good news is that when both the phone and the MacBook Pro were charging, I saw the same results as when I was charging a single device. So, you can definitely give the RAVPower 65W charger a chance if your original chargers are no longer working or if you want a single device in the place of two. And no, it will not damage the power input circuits of a MacBook Pro since the testing results show that everything is well within the suitable range. I would have liked to see a UL certification which I know can be quite expensive and at least a small cable included in the package, but other than that, the RAVPower RP-PC133 is definitely worth taking into consideration if you’re in the market for this type of device. 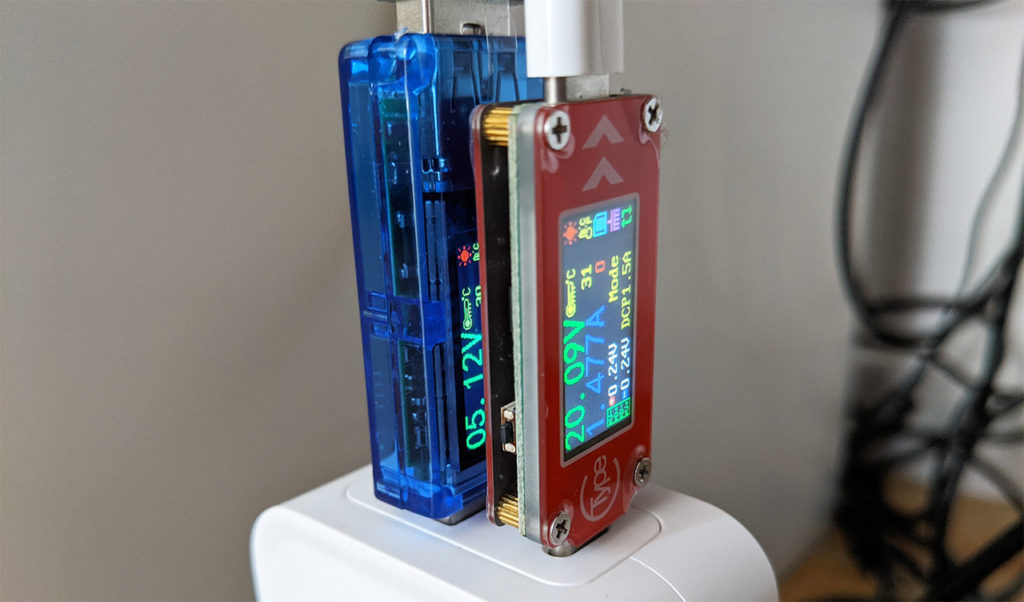 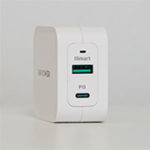