The RAVPower RP-PC136 is a multi-port desktop charger that offers a total output of 65W which gets intelligently distributed between up to four simultaneously connected devices, ensuring that all of them get recharged as quick as possible.

I immediately noticed that there are a lot of similarities with the RP-PC133 and that’s to be expected, considering that the manufacturer has relied on the same GaN technology to keep both chargers as compact as possible and to ensure that the temperature is kept in check, regardless of the number of connected devices. Of course, the RP-PC133 is a two-port wall charger (also with an output of 65W), while the RP-PC136 is intended for more heavy-lifting and you do get the aforementioned (intelligent) iSmart technology on two USB-A ports, as well as two USB-C PD ports to keep your Apple devices fully charged. 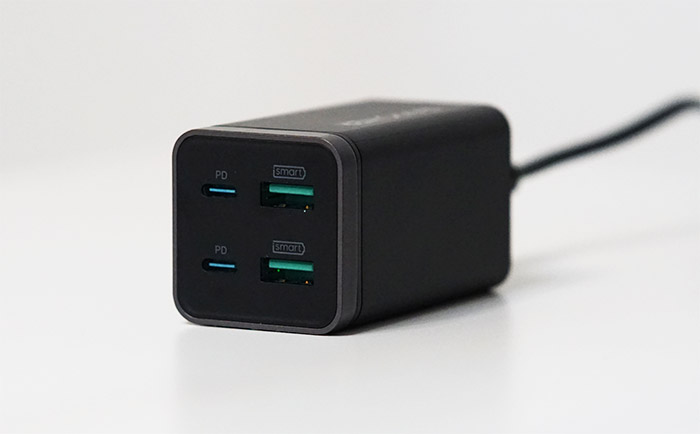 And yes, Apple has been very weird this year with its omission of a charger in the pack (with the hopes that you’ll purchase a separate one from them), but these GaN chargers can be a very reliable alternative to the native devices (hopefully, Apple will adopt USB-C in place of their proprietary charging port).
Of course, when dealing with third-party hardware one can’t be vigilant enough unless you want to risk damaging your expensive computer or smartphones, so let’s put the RAVPower RP-PC136 PD Pioneer desktop charger to the test and see if it can indeed replace the original Apple chargers.

I have tested a couple of GaN wall chargers before, such as the Choetech Q6006 (61W) and the RP-PC133 also from RAVPower, both very compact devices which could easily compete with higher-priced chargers, so I do have high expectations regarding the RAVPower RP-PC136. After taking it from the package, I immediately realized why it’s called a desktop charger: it’s essentially a plastic cylinder with four ports and a fairly long cable that’s going towards a power source. So it’s a bit less compact than the RP-PC133 since it measures 3.0 x 1.6 x 1.6 inches (7.5 x 4.0 x 4.0 cm), which is not really surprising due to the additional two ports and you may have to give more thought on where you’re going to position it considering that it doesn’t have the flexibility of a wall charger. At the same time, there is a far lower chance that it will occupy any adjacent socket. That being said, the small plastic brick is mostly covered by a black matte finish, with the exception of the ports section which has a semitransparent band which allows a faint green LED light to shine through followed by a thicker gray band that imitates metal (but it’s still plastic).

On the rear side, there is the (two-pin) AC-input, but, the area of interest is going to be on the front, where there are two USB Type-A ports (iSmart) and two USB Type-C PD ports. The Power Delivery output can be 5V/3A, 9V/3A, 12V/3A, 15V/3A, 20V/3.25A and, of course, the limit for each of the two ports is set to 65W (in case you connect two laptops, the load will be shared between them up to the maximum output). The iSmart output can be 5V/3A, 9V/2A, 12V/1.5A with the maximum set to 18W for each port and, as you can see it’s identical to the RAVPower RP-PC133 (well, minus the additional ports). The iSmart technology is not just a fancy name for the USB ports, it actually has the role of making sure that the output will be suitable for the device that you have connected, ensuring that it’s protected from over-current, short-circuits, over-voltage and overcharging. I also have to mention the importance of the GaN technology which is pretty much the future of all chargers and it has the role of generating less heat, allowing the charger to be far more compact than before, while delivering more in terms of performance.

Speaking of performance, let’s put the RAVPower PD Pioneer 65W desktop charger to the test. To do so, I took two main devices, both supporting fast charging: the good ol’Pixel 2 XL and a 13-inch MacBook Pro. I have tested the Choetech Q6006 and the RP-PC133 using these two devices and I will take the results that I got using the original chargers from these articles. That being said, the first thing that I did was to check each device individually and see if there are any significant variations.

So, after I connected the smartphone to a multimeter which was then inserted into one of the two USB-C ports, I saw that it went between 8.98 to 9.01V (the target is 9.0V) and the power that it drew ranged between 8.5 and 10W (you can see the other stats in the photos – such as the amperage). So far, the performance is nearly perfect, so we moved to the MacBook Pro which was again, the only device connected (using a Thunderbolt 3 cable). This way, the multimeter showed a fixed 19.94V with no variation in voltage and the power output was 27W (with minimal variation).

The original Apple charger offered about 20.28V and could draw 37W, so it’s slightly more powerful than the RAVPower desktop charger, but we still need to appreciate the accuracy and the consistency of the RAVPower RP-PC136’s performance. Afterwards, I decided to check the iSmart ports using a different multimeter (for USB-A) and, as you can see, the voltage stayed stable at about 5.01V which is very close to ideal. I also kept the MacBook charging up alongside it and this takes it to the final phase of the test where we see how the charger behaves when multiple devices draw power.

To test the USB-A ports, I have to rely on a fairly large multimeter, so it only allowed one USB-C to be connected, so, with three devices connected at the same time, it didn’t show any significant change. But, after I connected a smartwatch and a pair of TWS earbuds into the USB-A ports, and the aforementioned MacBook Pro + the Pixel 2 XL to the USB-C ports, things did change since the MacBook would no longer be charged at almost 20V, but only about half (approx. 12V) and the power output was limited to 17W. But again, the performance was stable and well within the specs, so, the RAVPower RP-PC136 can definitely replace the original chargers and, in some cases, it can even outclass them. 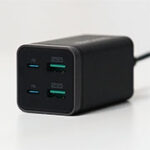