The truly wireless earbuds are currently the hottest trend in the sound department, but there is another, more niche type of product that lately has been gaining some traction and it relies on bone conductivity to let you ‘hear’ the music instead of your ears. More specifically, the concept behind the bone conduction headphones is the reliance on your cheekbones to send the vibrations towards your inner ear, effectively bypassing the eardrum.

For this reason, the bone conduction approach has been a reliable way for people with hearing impairments to be able to listen to music without further damaging their eardrums, but the manufacturers went a step further and have been trying to market these devices as a means to listen to music while also being aware of your environment while exercising outdoors or as a way to avoid warming up your ear canal when working out. 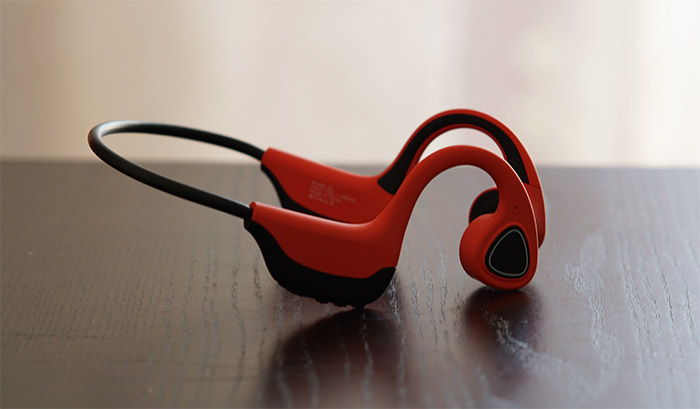 Perhaps the most affordable bone conduction headphones on the market are the Tayogo S2 which do promise to offer a good music reproduction, a long lasting battery life and to be very comfortable, but, considering that this technology is still in its infancy, is it a good idea to try an entry-level device? It’s clearly an interesting product with a cool concept behind it, but a low price tag can mean a lesser implementation of the technology, so let’s have a closer look at the Tayogo S2 and see if they’re worth purchasing or if it’s better to go with the more expensive solutions.

Built Quality and Design
If you’re familiar with the Aftershokz Trekz Air bone conduction headphones (or the latest Aeropex), the Tayogo S2 follows a similar design blueprint, so, we’re dealing with a couple of piezoelectric crystals (it’s usually Quartz, and, for price reasons, I’m going to assume that’s what Tayogo used as well) which sit inside the couple of cylinders that will be positioned directly on your cheekbones, near the entrance of your ears (I also assume that the piezo crystals come with some sound amplifiers, otherwise, the music will be very shallow and tiny). The two front-facing cylindrical elements are attached to two arches that will go around your ears, followed by a couple of fairly large plastic pieces (that accommodate the Bluetooth chip and the controls-related hardware) and, lastly, the two come connected by a fairly rigid rubbery tube. 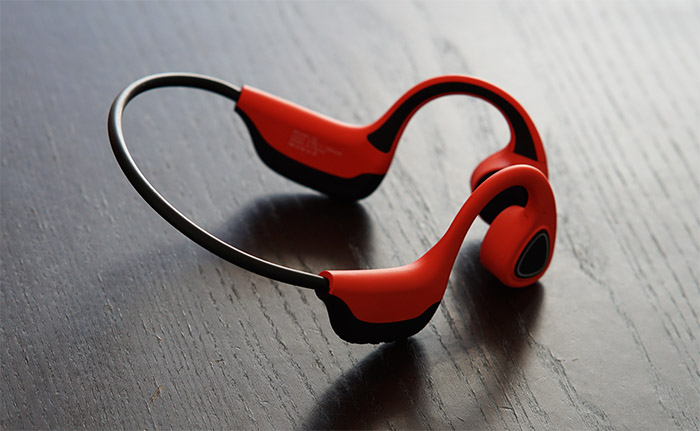 They’re clearly quite similar to those fitness Bluetooth earbuds that had the wire that went around the back of the head (these were very popular before truly wireless earbuds stole the show), but one significant difference is the rigid rubber band that goes around your head and sits awkwardly elevated. The reason for it seems to be to keep the two connectors pressed against your cheekbones, but, since it’s not adjustable, you won’t be able to wear anything on your head while using the S2 headphones.

Other than that, the Tayogo S2 still feel decently comfortable and I do think I could use them for a prolonged period of time, depending on the battery life. Speaking of which, the device is equipped with a 200mAh battery, which, as the manufacturer says, should last for about 6 hours (remains to be tested). Since the Tayogo S2 don’t rely on the traditional speakers to transmit sound, you won’t find any openings where it gets in contact with your skin and, instead, there are two soft rubber pads to ensure that there is no uncomfortable pressure on your cheekbones, without preventing the transmission of vibrations towards your inner ear. On the left bud, there is a fairly responsive MFB (multi-function button) button for pausing or playing the music, to answer / end a call, as well as for putting the device in Pair Mode after powering it on. 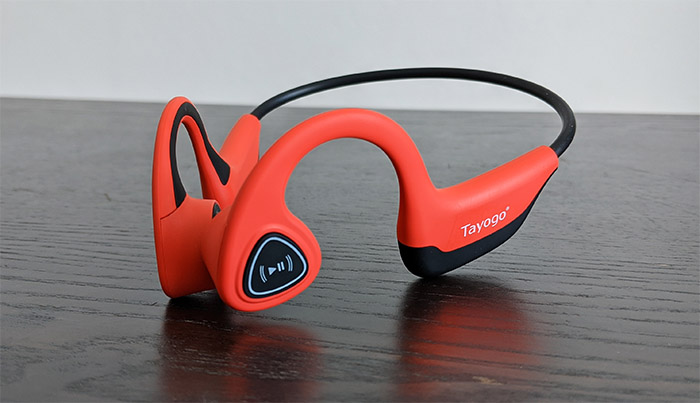 But, the main set of controls can be found on the right section of the headphones, immediately after the ear hook: first, there’s a small hole with an LED hidden within it (it will flash red and blue while waiting to be paired and will flash blue slowly after it has been connected to a mobile device; when there’s an incoming call, the LED will flash blue rapidly and, while charging, it will be solid red – when it’s fully charged, but still connected to the charger, the LED will become solid blue), followed by an On/Off button (press and hold it for about 3 seconds to turn the headphones on or off) and two additional buttons, one for Volume Up (also, you can press and hold it to go to the Previous track) and the other for Volume Down (you can also press and hold it to go to the Next track).

The buttons are rubbery and easy to press and I had no trouble identifying the right one while jogging. Besides the buttons, there is also a micro-USB port covered by a small silicone piece to recharge the battery – there is a small USB cable inside the package. I did say that I found the Tayogo S2 to be comfortable and a part of the reason is the weight which is about 1.05 ounces (about 30 grams). 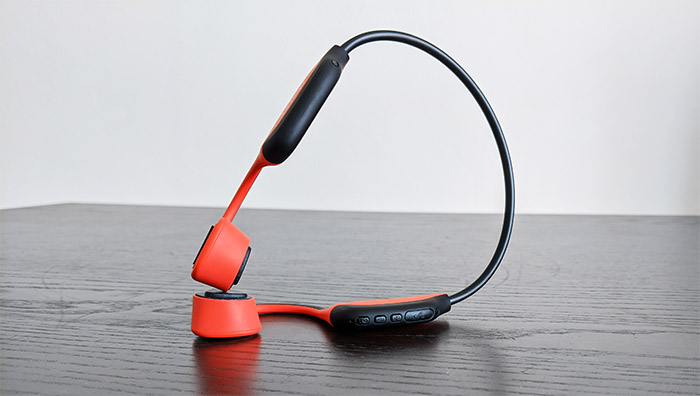 Furthermore, the Tayogo S2 are IP55 certified, so it is mostly protected from dust ingress and it should also do fine while it’s raining (it was tested with water jets directed towards the device from any angle), but, it’s not water resistant, nor waterproof, so you shouldn’t wear the S2 headphones while swimming or in the shower.
Note: The model that I got is a shade of orange (Tayogo says it’s red) with some black sections, but there are also a couple of other colors available: blue and gray.

Connectivity and Sound Quality
The Tayogo S2 bone conduction headphones use Bluetooth v5.0 to connect to the mobile device and, similarly to some of the truly wireless earbuds that I tested so far, the maximum distance until the signal would get unstable was at about 30 feet. The pairing process is also the same: turn on the headphones, wait until the LED starts flashing red and blue and then, from the mobile device, search for Tayogo S2 from the Bluetooth list and simply pair with it – this is also the only way you’re going to see the current status of the battery. Since these are not really headphones in the traditional sense, the vibrations will travel directly to your inner ear avoiding the eardrums, so, the sound quality is never going to be as good as you would get with any regular headphones. But it can get worse, because the ears are always open to environmental sounds, which means that the bone conduction headphones have to be very loud to counteract the ambient noise and that can lead to annoying consequences. 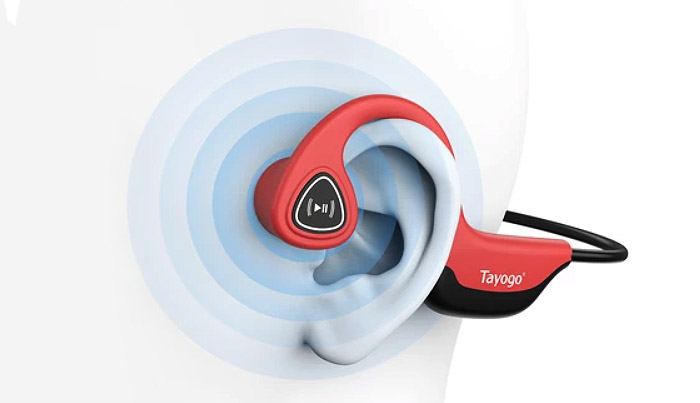 When I say loud, I mean the vibrations have to be more intense (there are no speakers) and, at a higher volume (80% and over), the Tayogo S2 would get uncomfortable since the vibrations would give a pinching effect on your cheeks. So, ideally, it should stay below 70%, but, in a loud environment, that will obviously be out of question. I used the Tayogo S2 in a loud coffee shop and while I was on a loud street (the sound was measured at around 70-75dB in both cases) and it was necessary to push the volume above 70% using a Google Pixel 2 XL, so it’s best to use these headphones in a quieter environment (60-70dB or lower is ideal) – of course, if you’re not bothered by the constant tingling in your cheekbones, then you’re free to use them regardless of the ambient sound.

As for the sound quality itself, the frequencies get distorted a bit considering that the bone wasn’t made to listen to music, so you don’t get anywhere close to audiophile level (and neither does anything from the more expensive Aftershokz headphones series – this is a limitation of the technology). The sound feels a bit distant and neither the bass, nor the highs are pronounced, the overall experience being similar to hearing the music from a couple of speakers from the distance. 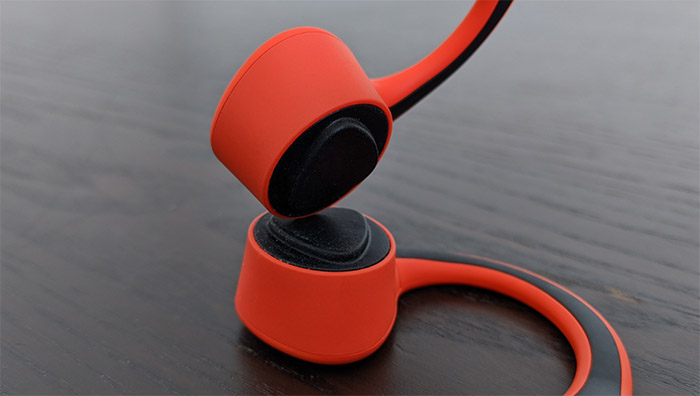 I do see their usefulness if you’re biking and want to be able to hear the traffic or when you’re at the gym and don’t want to have sweaty ears and this was the targeted public, but they will work properly only if it’s a quieter street or gym. Tayogo has added two earplugs in the package which supposedly will improve the sound quality and, of course, they do, but this does defeat the marketed purpose of the product. That’s why I think that the people that will undoubtedly get the most out of these headphones are people with damaged eardrums, regaining the ability to hear music without being necessary to listen to it at a dangerous level (therefore further damaging the eardrums) or to once again hear podcasts or music in stereo mode (if the damage is in one ear).

It’s worth noting that there is some sound leakage, so the people close to you can hear what you’re listening, but I was pleasantly surprised by the call quality. It wasn’t the greatest from my end, since, again, it was highly dependent on the ambient noise, but on the other side of the call, the person said that my voice was clear, almost indistinguishable from when I was using my phone’s microphones. In terms of battery life, Tayogo claims that the S2 should last for 6 hours on a single charge and that’s about what I got when the volume ranged between 60-70 percent.

Conclusion
The entire premise behind the Tayogo S2 was to allow its users to be aware of their environment while also being able to listen to their favorite music or podcasts (while working out, jogging or biking) and they do work, if it’s not too loud outside; otherwise, you do have to cover up your ears or let your cheeks be pinched by the high vibrations. Other than that, I did find that the S2 headphones are comfortable to use and the battery life is more than enough, but, if sound quality is a priority, then you should steer clear of not only the Tayogo S2, but all the available bone conduction headphones on the market, because the technology is just not there yet (it’s true that the Aftershokz headphones are just a little bit better, but considering that the eardrums are designed to properly vibrate instead of the cheekbones, I’m not entirely sure if the tech will ever improve to be a proper alternative to the regular headphones or earbuds). Of course, people with hearing impairments will definitely enjoy using these headphones and, even for the rest of the public, if you don’t need to use them in a loud environment, then you should definitely give them a try. 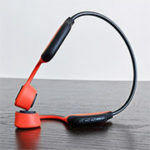