The UGREEN GaN X 3C1A was introduced to the market to showcase the advancements that the manufacturer has managed to accomplish over the last year and yes, the device can be considered the second generation of GaN portable chargers series, sporting quite a few changes over the 65W UGREEN charger.

Some are only skin-deep since the 100W charger is indeed slightly larger and there’s a different matte finish, but the new UGREEN offers a higher power output and it seem to come with what the manufacturer calls the third generation GaN semiconductor. I got accustomed to be weary of such marketing terms, especially after reading about the GaN 2 that’s apparently being used on Baseus’ own 100W charger (it’s still the same tech). In the case of UGREEN, the GaN tech is also the same as before, but it is more efficiently used as to offer the higher 100W output (the third-gen semiconductor refers to the GaN itself). 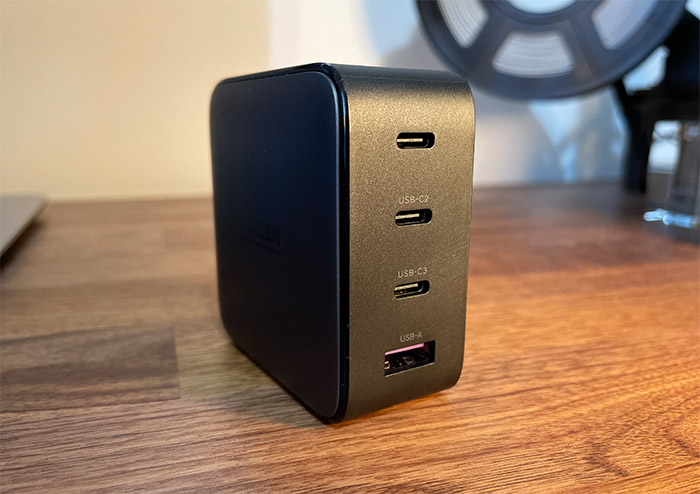 This should not be taken lightly because there is a huge gain from the previously used silicone. Indeed, the chargers are more compact, more power efficient and have a far higher power output. And it’s interesting to see that similarly to the Baseus 100W charger, the UGREEN GaN X is incredibly compact, only measuring 2.7 x 2.7 x 1.3 inches (6.9 x 6.9 x 3.3cm), while, at the same time, it sports four USB ports. This distances it quite a bit from its competitors and it does make the 100W charger an appealing option if you want to charge multiple, somewhat demanding devices at the same time. I wouldn’t really get my hopes up on a gaming laptop, but a MacBook can definitely be kept alive (and more) with 100W.

The UGREEN GaN X charger is made of plastic and the sides are covered by a gray matte finish, while the frame is matte black. Depending on where you’re ordering the device from, it’s going to have a different plug and, as expected the most compact option is the US-type of plug, which is actually retractable, allowing you to easily carry it around.
And, as I said before, you do get lots of ports, so you may carry only a single charger and a bunch of cables, especially since the laptops come with those annoyingly huge power bricks (and yes, Apple’s charger is also too big – if they could just use the GaN technology already..). 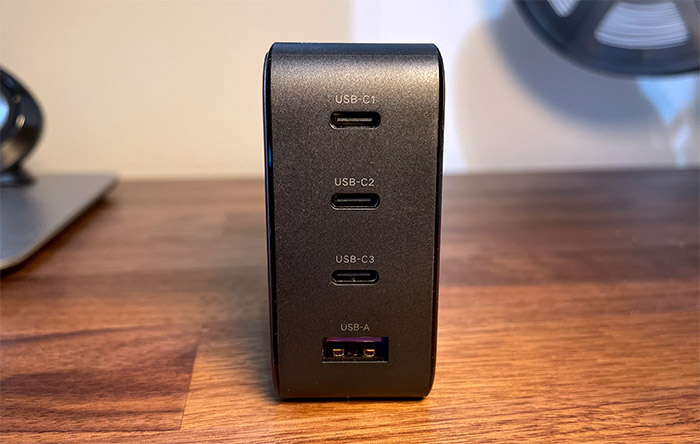 Unlike other chargers, there is no LED light to let you know that there is power flowing through and I suppose I could see a positive side, that it won’t annoy during the night. There are three USB-C ports and they’re not identical. The C1 and C2 can independently reach up to 100W if a single device is connected to the charger (PD3.0 / PD2.0 / PPS and QC4+), but the C3 port is limited to 22.5W (supports QC3.0 / FCP/ SCP), the same as the fourth port, the USB type-A one (which supports QC3.0 / QC2.0 / SCP / FCP/ AFC / Apple 5V2.4A and BC1.2). Obviously, the 100W is the global maximum output, so, if you connect multiple devices at the same time, the power is going to be divided among them. 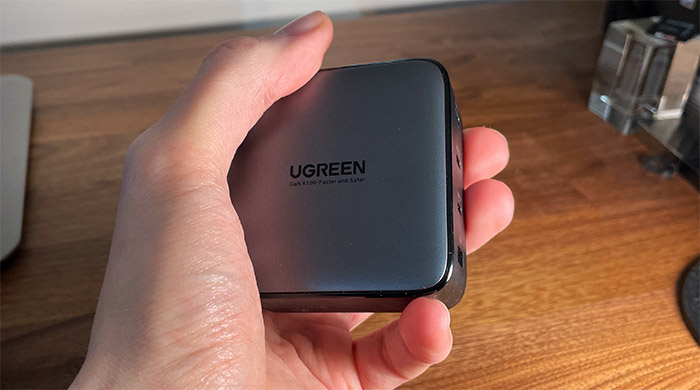 To test how well the UGREEN GaN 100W fast charger performs, I decided to put it against some proven chargers and yes, the ones from Apple still remain some of the most well made devices in the industry, so I decided to use the charger that came with a 2017 13-inch MacBook Pro.
The idea is to keep the values as close as possible to the output provided by the original chargers, so, first, I checked how well the Apple charger performed when connected to the MacBook. The power output was about 38-39W, the voltage a solid 20.28V and the amperage slightly fluctuating between 1.82A to 1.96A.

I did the same test using the original Apple cable which was connected to the USB-C1 port on the UGREEN charger. The power output was less, reaching only 36W (which remained stable at this value) and the voltage was fairly stable at 19.9V – the amperage did not fluctuate that much moving between 1.83A to 1.85A, which is excellent.

Afterwards, I connected the Apple charger to an iPhone 12 using the original cable and the power output was, on average 16W (fluctuated a bit), the voltage was steady at 8.93 and the amperage moved from 1.20A to 1.77A.

Returning to the UGREEN charger, I continued to use the USB-C1 port and, when connected to the iPhone, the power output was, on average, 18W, the voltage also did not move from 9.08V, while the amperage went from 1.82A to 2.32A.

On the next step, I connected the MacBook Pro to the USB-C3 port of the UGreen GaN X and, as expected, the maximum power output was 20.9W; the voltage was fairly steady at 15V and the amperage stayed surprisingly steady at 1.393-1.394A.

I also wanted to check the performance of the USB-A port, but I had a meter that was capped at 5V and, after trying to use the USB-C multimeter with some random cables, the power output got really weird (like 0.1W or something) which enforces the idea why cables are also important, almost as important as the charger itself. And, unfortunately, you don’t get one in the package, so make sure you choose a proper one. Lastly, I decided to connect three devices at the same time, the MacBook Pro, the iPhone and a pair of Sony headphones, all supporting some form of fast charging and, after reaching close to 100W in output, I could see how the wattage was slightly cut in real time. One thing that I didn’t like was that whenever I would connect or disconnect a device, the charger would disconnect and reconnect all remaining devices.

This is done to calculate the power output and I have seen it on the Huwder A1903 as well. Depending on the type of devices that you’re charging, you may not even notice, but it can also mess up some important work (for example, while powering up a Raspberry Pi), so be aware of this behavior. I know that some of you may wonder if the charger gets hot and yes, the traditional charger would usually get annoyingly warm to hot, but the GaN technology should prevent it from happening. Sure, the charger can get slightly warm (especially when pushing 100W), but, if it gets hot, then something may not be right and you should return it since it’s most likely defective. 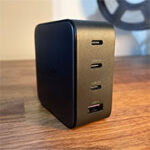