The Umidigi Uwatch 3S is the direct successor to the Uwatch 2S which was released a bit earlier this year and, in a sense, it’s a corrected version of the previous smartwatch since it now has a proper Sp02 sensor (for measuring the Oxygen level in blood), while the Uwatch 2S got this functionality removed from the software – I assume because the hardware couldn’t really support it.

Everything else seems to be identical, so you get the same circular design, the same color display, the software and the functions are also identical, minus the Sp02 measurement, of course.
I know that the smartwatch had a rough start due to the limited features and especially due to the bad battery life (unless you went with Pebble), but after Apple made it trendy, everyone wanted one, so it’s interesting to see that Umidigi promises such a compelling package at a very affordable price tag. 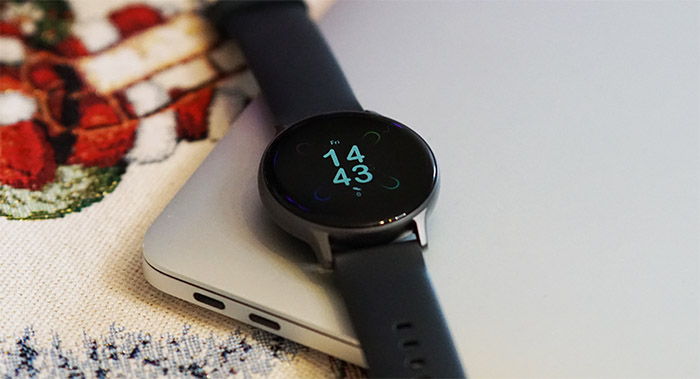 Indeed, the Uwatch 3S seems to offer up to 15 days of battery life while its smart functions are active, there’s also the 24/7 heart rate monitoring, the aforementioned Blood Oxygen monitoring, multiple sport modes, but it does not rely on Android Wear. Some would see it as an advantage, but we’ll just have to see if Umidigi has managed to build a balanced device and whether the high price of some other smartwatches is completely unjustified.

Umidigi is mainly known for its budget-friendly smartphones and smartwatches, and, while the plan to undercut every competitor has worked really well in its favor for a while now, surely it had to make some compromises at least in the design department, right? It will obviously not feel the same as an Apple Watch or a Galaxy Watch, but it can definitely hold its ground against devices that cost at least double the price. Indeed, the circular frame of the Uwatch 3S is made of aluminum alloy (aircraft-grade!) which ensures that the smartwatch weighs very little – pair that with the plastic rear side and you get a device that weighs only 0.88 ounces, without the straps. Not that the silicone straps add that much weight even though they’re fairly large (very similar to the straps that I got with the TicWatch Pro 2020 – well, minus the leather top). The front is made of glass and I am not entirely sure whether they used Gorilla Glass (the manufacturer hasn’t disclosed it), but the screen didn’t get scratched even though I bumped it into various objects (unintentionally). 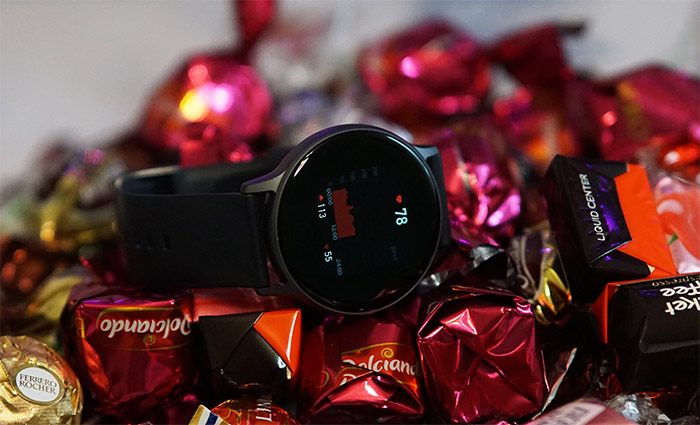 Since it’s still glass (2.5D tempered glass with anti-fingerprint coating) and considering that there is no protective lip, which is the standard with the rugged smartwatches, I would be a bit more careful and avoid hitting the screen especially on sharper surfaces (or dropping it). It may not be that shock-proof (well, most smartwatches aren’t), but it does seem to fare quite well with water activities. That’s right, Umidigi says that the smartwatch is waterproof, so it can be submerged down to 164 feet (or 50 meters) due to its 5ATM rating. It still won’t work for scuba diving, water dives, dynamic watersports or hot water showers (apparently), but it should work just fine while swimming or snorkeling (raining or snowing on the smartwatch will also do no damage). One oddity that I immediately noticed after taking the smartwatch out of its package is that there were no buttons anywhere on the case. So how do you exactly operate the Uwatch 3S?

You need to tap the screen to wake it if the smartwatch is not strapped to your wrist or simply rotate to wake if it’s on your wrist. I have noticed that the tap to wake would not always work and I had to insist with two or three taps to activate the display, but while on the wrist, the rotate to wake function worked flawlessly. Another quirk that I saw was when I left the smartwatch on the desk near my keyboard was that my ‘violent writing’ would sometimes activate the screen – so yes, vibrations seems to sometimes turn on the display. While it’s a minimalist approach and most people won’t have anything against it, I would have liked at least a button for when I have my gloves on or my fingers wet. But again, the tilt to wake actions seems to work fine, so I suppose it’s not big of a deal, especially considering the price tag of the device. 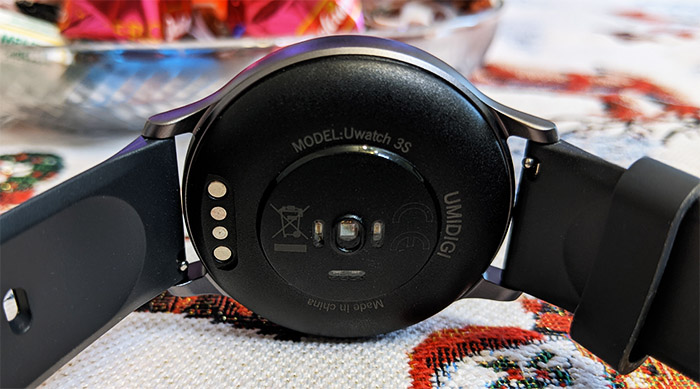 As I already mentioned, the rear side is just plastic but here is where you will see the main (and perhaps only) difference between the Uwatch 2S and 3S. And yes, I am talking about the additional Sp02 sensor that sits on the circular protrusion. Surprisingly, the protrusion doesn’t make the smartwatch feel uncomfortable, but that’s something I expected considering that it’s very similar to the rear side of my daily driver, the TicWatch Pro 2020. Also on the rear panel, there are four pins for the proprietary charging cable and I do pray for a standard for the smartwatch charging ports, but I don’t see it happening anytime soon. The cable attaches magnetically, but it doesn’t firmly attach to the pins (as compared to the aforementioned TicWatch), so it does easily disconnect from the rear side of the Uwatch 3S.
Note: The silicone straps are 22mm and you can easily add third-party straps (the mechanism is universal); also, the Umidigi Uwatch 3S model that I got was all black (space gray), but you can also opt for white, rose gold, titanium gray or ocean green.

Qualcomm has finally upgraded its Wear line and I know that a lot of you are looking forward to see the smartwatches that make use of the new platform (the Wear 4100+), but the Umidigi Uwatch 3S did not go the WearOS route and, instead, it decided to equip its entry-level smartwatch with the Nordic52832 SoC which seems to be working just fine for the applications that it provides. The nRF52832 is built around the ARM Cortex-M4 CPU that’s running at 64MHz and, while I couldn’t find how much RAM there’s inside the Uwatch 3S, the manufacturer has disclosed that the storage is 64MB. I do see that there is a lot of confidence in the efficiency of this chip considering that Umidigi says that the battery life is up to 15 days which is amazing if true. Furthermore, since the software is not very complicated, the CPU + RAM combo seems fine considering that I experienced no freezes and I could navigate through the screens decently well (the transition animation is not really the fastest, nor the smoothest). The smartwatch also didn’t get hot while I was going through the screens for a few minutes – the battery also held up quite well.

Note: Connectivity-wise, the Umidigi Uwatch 3S relies on Bluetooth 5.0 LE to pair to your smartphone and I saw that the Nordic52832 does have support for the 2.4GHz WiFi standard, but it doesn’t appear that the smartwatch uses it. I also noticed that the Uwatch 3S does not have GPS (it’s a very budget-friendly device, so it’s not a surprise), but you do get a 3-axis geomagnetic sensor, a 3-axis acceleration sensor, a PPG heart rate sensor and most importantly, the Relative SpO2 sensor which is usually something that you see in far more expensive smartwatches.

As for the display, I think it’s both one of the weakest points and also one of the strongest for this smartwatch. The reason why I say this is because the display is not circular, but a small rectangle in the middle of the circular screen (it’s not centered, but positioned slightly towards the top). And I noticed that Umidigi did its best at matching the backlight of the panel with the black bezels, but it’s still very much noticeable. 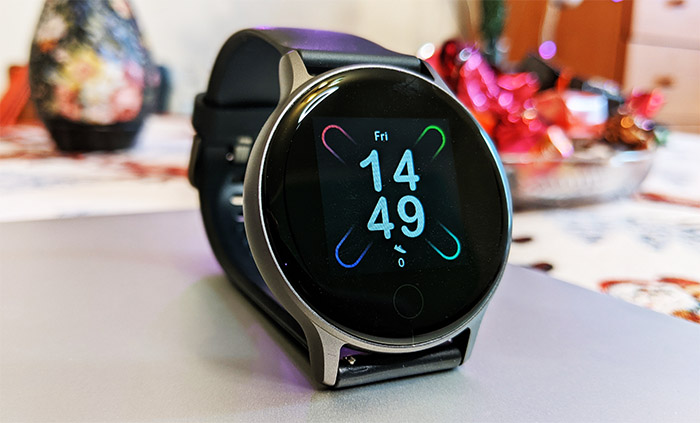 That being said, the Uwatch 3S does have a 1.3″ color TFT LCD touch display with a resolution of 240 x 240p and, considering the price tag of the smartwatch, it’s actually quite decent. The manufacturer relied very much on contrast to make the colors pop out and the brightness level can go quite high without affecting the colors – if the rectangle’s borders bother you, you can slightly decrease the brightness of the screen which will allow for the black levels to look more deep.

After I took the Umidigi Uwatch 3S out from the package, I was a little bit confused about what I should do to turn on the display (there are no buttons), so I immediately connected the charging cable which has confirmed that the battery was depleted – I waited about two hours and a half to go to 100 percent. Afterwards, I strapped it on my wrist and checked out its features. The first thing that you’ll see is the default watchface which will show the time and the number of steps that you made and, by sliding down, it will open a window with some shortcuts, the first allowing you to adjust the Brightness, followed by the Vibration, the Stopwatch, the Weather and the Settings. 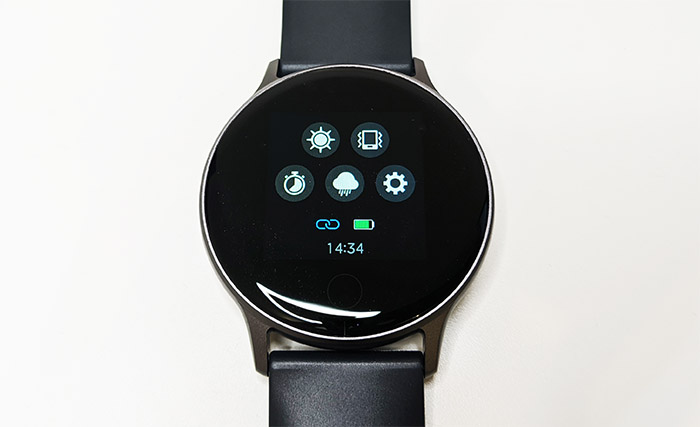 A bit lower, you can see whether the smartwatch is paired to a smartphone (the link icon should become blue when it is paired) and the battery level (it’s not in percentage, unfortunately). Sliding left or right from the main page will toggle the same windows: the first is related to your health and will show the Sport Time (that you have underwent), the burnt calories and the average Heart Beat, while the second window will show you the number of Steps that you have taken, the walked distance and the burnt calories (once again). The third window will show some Sleep-related statistics such as the Deep and Light sleep pattern. 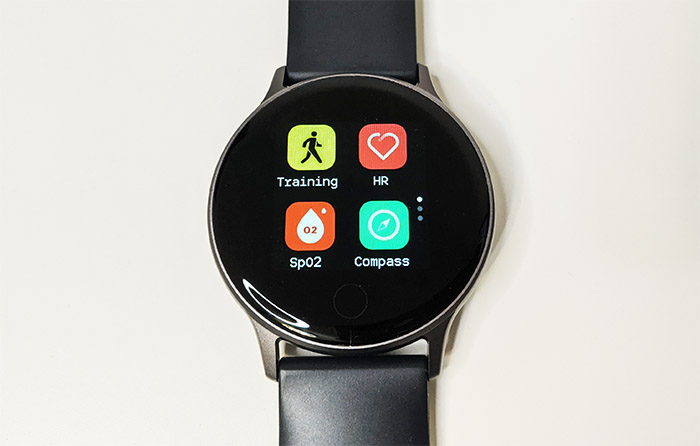 If you slide up from the watchface window, it will open the menu where you can access the Training app which allows you to keep track of various types of sports and outdoor activities (Walking, Running, Cycling, Badminton, Basketball or Football) and the HR app which will check your heart rate. Since I still have the TicWatch Pro 2020, I decided to put it next to the Uwatch 3S and see if the sensors show the same heart rate. And it did, but I was surprised to see that the Uwatch 3S is a lot more reactive to changes, while the TicWatch ‘waited’ a couple of seconds before displaying any recent changes in the heart rate (still, we’re comparing two devices that are nowhere near from the cost point of view – and the performance is very similar). Next, there’s the Sp02 measurement app which will detect the Oxygen level in your blood and, if everything is fine, it should show about 98%, but I couldn’t check its accuracy since I didn’t need to have a dedicated measurement device in my house, not do I have another smartwatch with a Sp02 sensor. 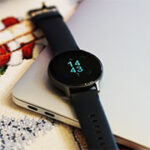