The Vebach S10 is a Qi-certified wireless charging stand that was built to make the charging process as easy as possible and to take the minimum amount of space from your desk. So yes, we are dealing with a compact device, despite being a stand-type charger and the manufacturer decided to mostly use metal to make sure that it remains stable, regardless of how tall the phone is.

Then again, you can charge the phone vertically or horizontally, if you have a gargantuan phone (I didn’t really have this problem with an iPhone 12, but the huge AGM Glory Pro didn’t play that nice). The manufacturer have been using the Qi technology for a while and the wireless charging stand isn’t really a new type of device (the iON stand is almost four years-old), so what’s new with the Vebach S10? 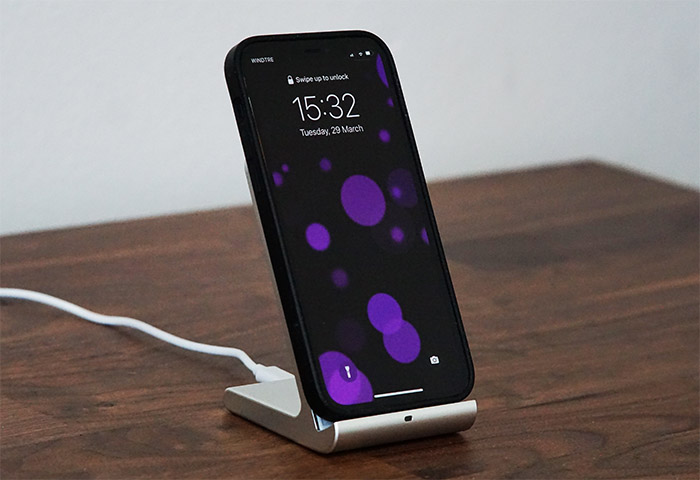 If you’re charging an iPhone, nothing new really because you’re still stuck at the 7.5W power input by design (due to Apple), but it can go up to 10W with other devices. Furthermore, the engineers have added protection from over-current, overheating and overcharging and perhaps the highlighted feature is the aforementioned ability to charge the phones vertically or horizontally. So, the Vebach S10 seems to be a fairly no-frills wireless charging stand that doesn’t really try to reinvent the wheel, so let’s put it to the test and see if it’s worth using with your phone or if some more expensive option, such as MagSafe is a better idea.

I have tested the 20W Vebach magnetic Qi charger and it was an interesting design approach (inspired by MagSafe), but the Vebach S10 is a completely different device. And that’s because a stand-type Qi charger doesn’t need to use magnets to attach to the back of the phone, although I did see the moving-coil wireless charger from Xiaomi which did rely on magnets to charge multiple devices at the same time. The Vebach S10 is designed to only charge a phone and it is shaped to resemble the top half of an iPhone, with the notch and all. And the device that I got is white, while there is a black variant available as well. 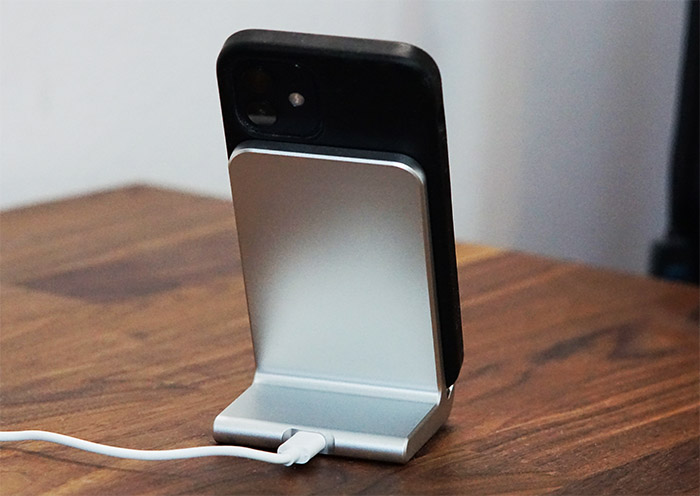 The white finish is glossy (seems like a transparent plastic cover) and the points that it gets in contact with the phone are made of soft silicone (they’re slightly elevated above the glossy section). This part of the Vebach S10 wireless charging stand measures 4.7 x 2.7 inches (12.0 x 6.8cm), so it can easily accommodate an iPhone 12 or 13 and, in case you have a far larger smartphone, you can put it sideways to charge it. But, it won’t work with all types of smartphones, especially those from the rugged niche that have some specific protrusions on the rear side, so you’re going to struggle a bit to find the right spot of contact.

I did try it with an AGM Glory Pro and it worked, but it needed to stay in a weird position – then again, most smartphones are flat (more likely with the help of a case), so it’s going to be fine most of the time. While the front part of the Vebach S10 charger is made of plastic, the stand is actually almost entirely made of metal (the plastic is embedded within the metallic shell), and I did like that it’s a single piece, with only the cut-out section for the LED. The footprint of the Vebach S10 measures 2.7 x 2.6 inches (7.0 x 6.6cm) and you may think that it’s not enough to keep a larger phone steady. But no, being made of metal did add some weight to the stand and it’s properly angled so not even the huge AGM Glory Pro managed to challenge the stability of the Vebach S10. 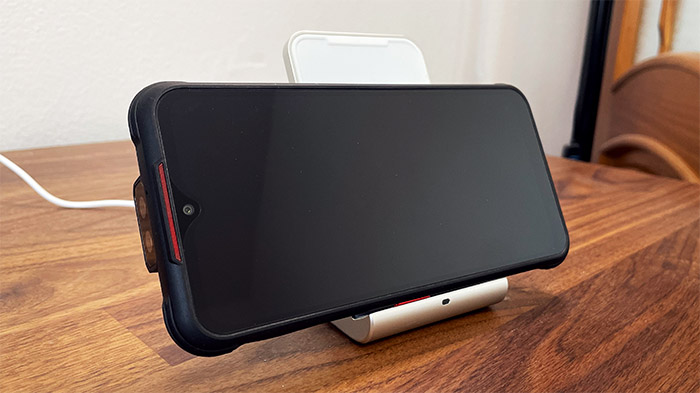 Furthermore, the USB-C power port is located at the rear side of the stand adding even more to the stability of the device. I also need to mention the silicone bottom section that will keep the stand into place. I have said that there is an LED in the front and it will light up for 3 seconds when it’s connected to a power source. If you put a smartphone on the stand and it’s charging, then the LED will start flashing blue for 30 seconds and then it will turn off. Lastly, in case you put a metallic object between the charger and the phone, it will increase the temperature of the stand (potentially to dangerous levels) and a sensor will send a signal to the LED to flash blue continuously. The cable that comes in the package is 3-feet long, so the Vebach S10 needs to be positioned close to the power outlet.

The Charging Performance of the Vebach S10

Since we are dealing with a wireless charging stand (that uses Qi), I can only check a couple of devices that actually support this technology. And I am talking about an iPhone 12 and the AGM Glory Pro. Apple has been really weird with its line of smartphones and it absolutely hates the idea of you going out of their ecosystem, so, while the MagSafe charger can go up to 15W, this is not the case with third-party chargers. 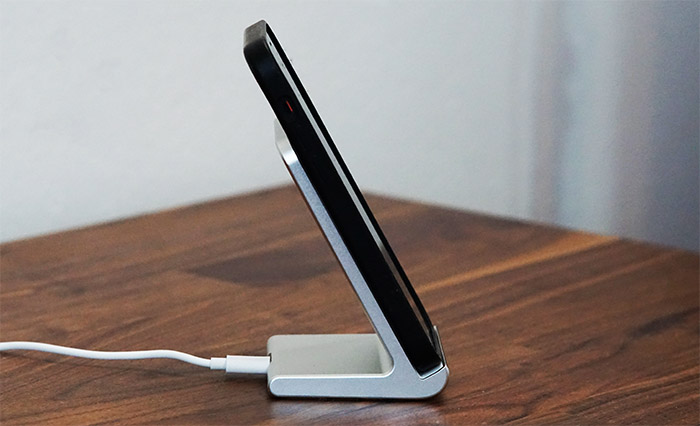 I have previously tested the Vebach 20W magnetic charger and I was initially surprised by how slow it charged my phone. It turns out that Apple has put a limitation to 7.5W, so this is the maximum that you can achieve unless you go with the proprietary charger, which is many times more expensive that the Vebach S10. I have waited until the phone went to 0% and then put it to the wireless charging stand. I also added a multimeter in between the cable and the charger (I used a UGreen GaN X 100W) and checked every 10 minutes the battery level of the iPhone 12.

As expected, the 7.5W limitation means that I got essentially the same results as I got when I tested the Vebach magnetic charger: 2 hours and 30 minutes. As you can see from the multi-meter, the value does move between 7.5 and 7.6W, the voltage was fairly solid at 9.05V and the amperage moved between 0.86A to 1.10A. As before, be aware that the last percentages are charged way slower by design as to not damage the battery and preserve its total capacity for a longer time. As a point of comparison I also used the Quntis 30W charger since it’s the closest (that I have available) to the Vebach S10 in terms of power output.

Next, I decided to see how well the AGM Glory Pro performed and after adjusting it to various positions, it seems that on its side, close to falling of the stand is the perfect spot. Not that I worry that much, it’s a rugged smartphone after all. That being said, I noticed that the power input did not pass 5W which was a bit strange considering that it can go up to 15W, so what’s going on?

I am not entirely sure because it seems that it may be an incompatibility issue (the manufacturer says that there is support for iPhone and Samsung smartphones, so maybe AGM uses different types of components). Lastly, I decided to check how hot the Vebach S10 can get while charging a phone, so I used the AGM Glory Pro’ thermal camera and, as you can see, the phone is getting a bit warmer than the stand. That’s to be expected considering that at 7.5W, the iPhone will not get hot, nor will it damage the battery in any way.

The Vebach S10 wireless charging stand doesn’t really bring anything new to the table, but that was never the intention of the manufacturer. No, the idea was to design a robust and stable stand where you can easily charge your phone, regardless of its size. And I think they pulled it off just fine. Sure, it’s not as fast as the MagSafe charger, but, taking into account the inexpensive price tag, the Vebach S10 definitely has its own place on your desk. 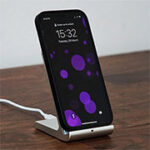