The OneOdio Monitor 60 are some of the best headphones that the manufacturers has developed so far and it does try to appeal to both DJs and audiophiles (as advertised on the box). This mostly means that they’re going for that neutral sound, so the professionals can make use of the Monitor 60 in a studio.

Whether they accomplished that or not remains to be seen and, while there aren’t that many brands that make such claims at the ‘under $100’ price bracket, you do have the AKG Pro Audio K240, the Sony MDR7506 or the Audio-Technica ATH-M40X to challenge any newcomer. That being said, the OneOdio Monitor 60 does have 50mm drivers which is definitely promising, the driver impedance is 38 Ohm and there is support for both 3.5mm and 6.35mm cables. 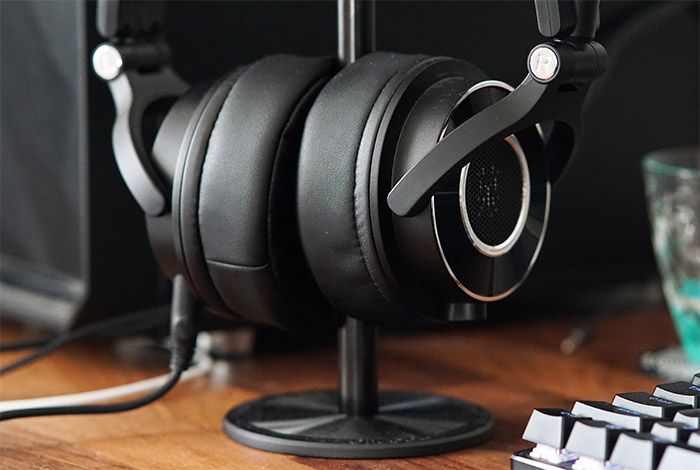 Indeed, one earcup has a 3.5mm port, while the other can connect to the 6.35mm cable that’s provided in the package and yes, we are dealing with a wired-only pair of headphones, so no wireless (Bluetooth) connection is available. They are also not open-back, unlike the Monitor 80 which seems to currently be the best that OneOdio has to offer for professionals. That being said, let’s check out the OneOdio Monitor 60 and run a few tests to see if they’re indeed suitable for both DJs and the harsh audiophile audience.

The first thing that I noticed after taking the OneOdio Monitor 60 from the package was how big these headphones are. Especially the cushions which are 1.2 inches thick (3cm), but they’re very soft and yes, there’s the expected faux leather, but they do seem like they’ll hold for a while – it reminds me of the Sony WH-1000XM3 pads which are still good after more than two years of daily use (yes, I needed that ANC). What confused me and it seems that other were at odds with it as well is the way the earcups move around. There is zero resistance and more than once did I put the earcups in the wrong manner on my head. Apparently the reason was so that the DJs and mixers can easily use a single earcup, but OneOdio could have made them move a bit less freely. 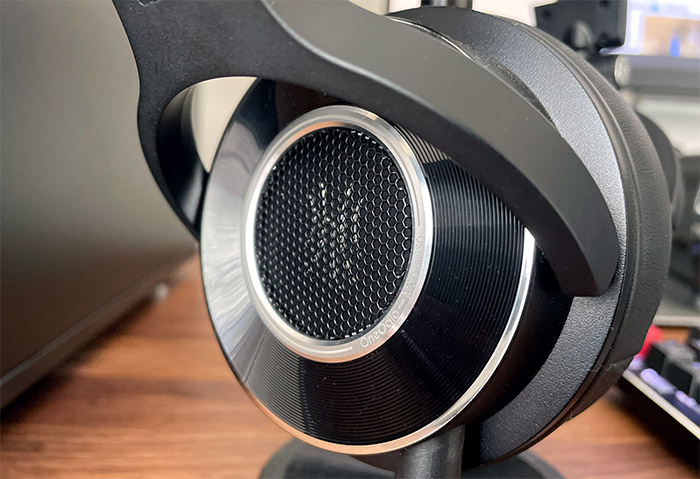 The back side of each earcup has a couple of steel-like plastic rings and in the middle, there is a opening that’s covered by a grid and for a moment I thought that maybe the Monitor 60 is actually open-back. But no, it’s just a visual effect with the OneOdio logo being visible from underneath the grid (it looks cool though). The earlap bracket is made of plastic and it’s connected to the slider with a metallic joint. The plastic is really not that great and I am not entirely sure if it will survive for a very long time.

Even the Sony used cheap plastic on their flagship ANC headphones and it does break even if you’re very careful with them. So yes, OneOdio could have gone with something sturdier. The slider is metallic and thick enough to survive long-time use and the headband is covered by faux leather which is very soft to the touch and it does have a good thickness to ensure the headphones won’t put too much pressure on your head. I guess the plastic is fairly lightweight because the OneOdio Monitor 60 do only weight about 11.5 ounces (or 326 grams) and, while wearing them, I found them quite comfortable. There is a bit of jaw pressure and, while the soft pads do attenuate the impact, you will need a break from them after a while (2 hours of constant use was my maximum). 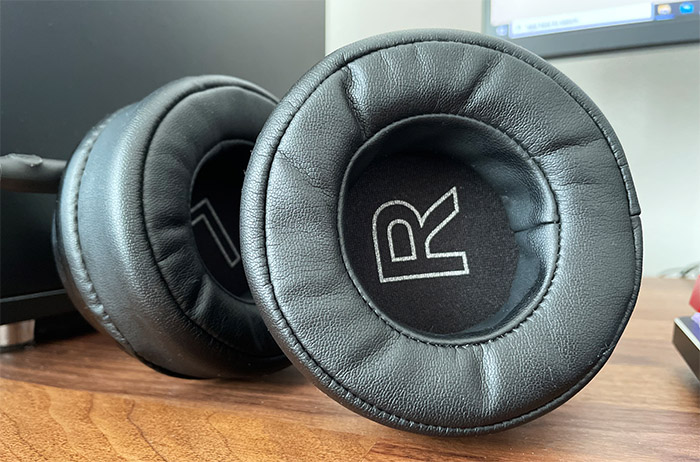 I always talk about the bad build quality of the Sony WH-1000XM3, but they remain the most comfortable pair of headphones that I tested so far and it’s worth noting that while they don’t have any pressure on the jaw, there was some at the top of my head. So you pretty much have to choose where the headphones will slowly, but constantly put pressure on. That is unless the headphones are incredibly lightweight, which is why I am waiting for my Head(amame) pair to arrive and see whether they’ll beat the Sony’s in terms of comfort. The OneOdio Monitor 60 do not have an internal battery, so there’s no WiFi connection and therefore no controls can be found on any of the two earcups.

But you will find the two jacks, the 2.5mm and the 6.35mm, one on the left and one on the right earcup. Of course, you will find the two cables inside the package – the 6.35mm cable is 10 feet long, so you can easily use it with amplifiers. But there is an additional cable that adds some controls to the headphones in case you decide to use the Monitor 60 with a laptop, console or smartphone (if it still has a jack) – you mainly get to play or pause a track. The cable also has a built-in microphone, so you can answer or reject calls which is a very nice addition.
Note: OneOdio also offers a nice looking stand for the headphones inside the package (I also got a glass coaster, which is cool).

The OneOdio Monitor 60 headphones are equipped with 50mm neodymium drivers which have gotten more common over the years and they usually sound very good. 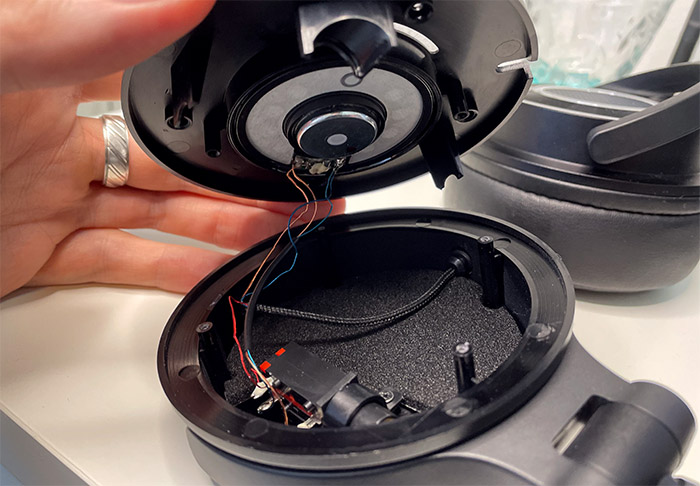 The impedance is 38 Ohm and the sensitivity is rated at 110+3dB/mW which means that a computer should be enough to drive this pair of headphones, although a smartphone may or may not struggle with them. I have opened one of the two earcups to see if I can identify what driver brand they used, but, unfortunately, there were no exposed logos or brand names. As a side note, I did like that it’s very easy to both remove and insert the cushion, you just need to slide it into the dedicated space and then simply rotate it – you should be able to see a small cut-out where you can insert a portion on the cushion.

As I do with every pair of headphones or earbuds, I first run some tests to check the quality of the drivers and that should give us some idea about the quality control of the OneOdio Monitor 60. Running a sweeping tone, I noticed that there was a little bit of buzzing, but nothing too dramatic and afterwards, I decided to check if the drivers match (the sound should be perceptible as being in the middle of my head). The interesting thing is that I have felt a slight deviation at the higher frequency. Next, I played a binaural song to get an idea of the sound stage and the imaging. 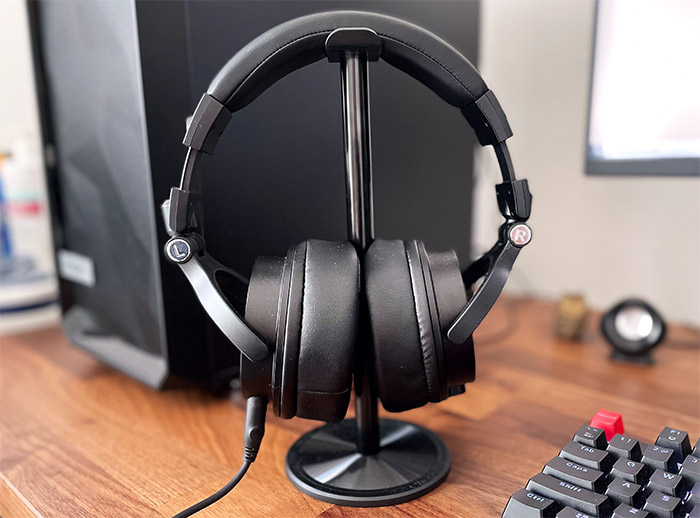 From the get-go, I do have to say that the sound stage is definitely wider than on any other OneOdio headphones (yes, including the inexpensive A70), so I was able to hear various things that I couldn’t with other headphones, such as a floor creak, the adjustment of a guitar, silent coughs. When compared to headphones in the same price range, such as the AKG K240, the sound stage is still not that wide, so it never truly feels like you’re there, next to the singer. The imaging was very decent since I could tell the location of each singer and instrument player, but I also noticed that the song sounded very bright, especially the highs, but let’s check with other songs to get a full idea of what we’re dealing with.

Let’s start with some bass-focused songs, such as ‘Faded’ from Zhu which has a lot of low bass and it’s fairly neutral, not boosted and perhaps a bit muted, but after listening to the song To the Hills by Laurel, I noticed that the low bass would sometimes get very faint, almost unnoticeable, so it’s definitely a bit rolled off with certain songs. The song ‘Morph The Cat’ by Donald Fagan has more mid-bass and sounds good and incisive. The song ‘Mr Jack’ from SOAD has the bass decently defined, but the voices seem to come forward, leaving the instruments way behind and at higher volumes, the treble gets annoyingly bright and the song gets very busy and muddy.

I listened the same song with the AKG K420 and the voices (mids) get their proper place and the instruments get more authoritative, without everything getting too busy (the sound is definitely cleaner, especially at higher volumes). The song ‘Deja Vu Affair’ by Sofi Tukker showed a more narrow sound stage (the AKG K420 felt only a bit wider, so it seems to be in the nature of the song – didn’t check with headphones that go beyond an acceptable price tag). The bass sounds good, not too boosted, the voices are again pushed forward over the bass and highs, which will not be that great for mixing.

Other songs that I checked were the ‘When The Levee Breaks’ from Led Zeppelin and I noticed that there was a better imaging and sound stage with the AKG K420. ‘She Burns’ from Vance sounded far more balanced and I liked the instrument differentiation. ‘Uninvited’ from Alanis Morissette shows that there is a serious emphasis on the female voice and in this song, the mids take away from the impact that the drums would have had (and they do have with other headphones). Playing the ‘Bowls’ from Caribou showed that the instruments aren’t that clearly defined when a lot is happening (and that’s pretty much the nature of this song) and that the highs have more emphasis.

‘Sweet Child of Mine’ from Guns n Roses and pretty much any song with Axl Rose showed that there is a bit emphasis on the treble, which I felt with other songs as well. It’s nothing dramatic, but, just as the focus on the voices, it does make the OneOdio Monitor 60 less neutral than promised.

The OneOdio Monitor 60 is an ambitious pair of headphones that want to be more suitable for the professionals, so the engineers wanted to achieve a neutral sound signature. The mid bass is neutral and the low bass is very close to neutral, the mids (mostly voices) are a bit too forward and the treble is a bit energetic, although nothing too dramatic. So, these are its advantages and disadvantages, and yes, you can use them for mixing and DJing, but don’t expect them to be perfectly neutral (or close to ideal). I do think that they should correct the mids a bit so that the next iteration will be able to outshine its competitors in the current price range. 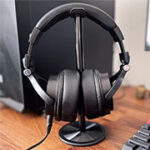