The TRENDnet TPE-LG80 is an 8-port PoE+ Ethernet switch, recently released by the California-based manufacturer as part of its new Long Range series which focuses towards ensuring that the PoE+ signal can be extended up to 656 feet while maintaining a multi-megabit throughput (10 Mbps full duplex) – by default, PoE can usually reach only up to 328 feet.

This way, the deployment of outdoors (or indoors) PoE devices, such as IP cameras or wireless access points is made a lot easier, but that’s not the only element that sets it apart from the other 8-port PoE switches from the competition: the TPE-LG80 is also offering VLAN port isolation and QoS (despite lacking an utility software) and it is one of the most compact 8-port switches available on the market right now, all that at an affordable price point.
Note: The Long Range series also includes the 5-port TPE-LG50, so TRENDnet is still testing the waters to see if there’s any user demand for an 8+ port LR switch.

Design
Unlike the consumer wireless router which was forced to migrate from the industrial look to become more attractive for a wider audience (the case of the minimalist WiFi systems), the Ethernet switch was allowed to keep its default form factor considering that it mostly has to cater to the small and medium businesses (the Ubiquiti EdgeSwitch and the Netgear S8000 are among the only Ethernet switches that deviate from the norm). The TRENDnet TPE-LG80 has also adhered to the industrial look, featuring a rectangular box made of metal and covered by a black matte finish.

It’s worth emphasizing that the TPE-LG80 is one of the most compact PoE switches on the market, measuring 9.45 x 4.13 x 1.1 inches, so I have to give kudos to TRENDnet for managing to include all the necessary hardware inside such a small case (when put next to the 8-port Open Mesh S8, the TPE-LG80 is about one fifth of its size).

Most PoE Ethernet switches can easily overheat, so, to alleviate this problem, the manufacturers often install a fan to keep the temperature in check, but, despite being small, TRENDnet decided to simply rely on the passive cooling, so the device remains quiet throughout the entire time it is operational (the TPE-LG80 has added ventilation grills on the left and right side, as well as on the rear) – after I opened the case, I saw that TRENDnet has added alloy heat sinks to re-route the heat from the chipsets. After I connected five PoE wireless access points, I noticed that the device did get slightly warm near the top side, but it showed no signs that it may overheat, so the cooling system seems to be working just fine even if it’s not relying on a fan.

Just like the servers, PDUs or corporate-level routers, the regular Ethernet switch was designed to be mounted on a rack, but the TRENDnet TPE-LG80 lacks the dedicated holes for attaching the rack mounting ears, so you’ll either have to use a tray to mount it on a rack or simply position it on a desk or shelf (don’t forget to add the four rubber feet (found inside the package), which will help keep the device in place regardless of the number of connected cables). If the space is limited, then the TRENDnet TPE-LG80 can also be mounted on the wall using the two bottom holes. 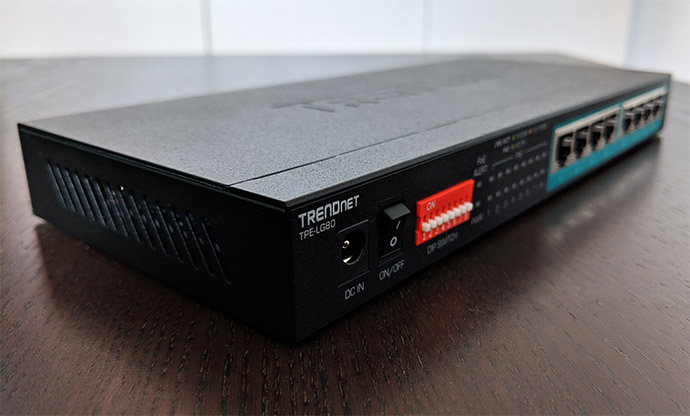 If you look around the case, you’ll notice that the manufacturer decided to put every port, button and switch on the front side of the device and I do think that this was the right call considering that the cable management is a lot better.

That being said, from the left, there’s a DC-IN port (to which you can connect a 100-240V 2.5A Max power brick), an On/Off switch (a welcomed addition), the DIP switch (a red area where there are eight small switches, each activating a certain function on some specific (or all) ports), the LED area and eight Ethernet Gigabit PoE+ LAN ports. The LED area consists of ten LED indicators positioned in two groups, the first two showing the status of the PWR (it will light up when the device is turned on) and if the PoE budget will go beyond the maximum 65 Watts (PoE Alert – be aware that each PoE port receives a budget of up to 30W), while the other 8 pairs of LED indicators show the connection status of every port: the top LEDs (LINK/ACT) will light green if the link is established at 1Gbps or amber when the connection is at 10/100Mbps, while the bottom LEDs will be solid green if you connect a PoE device (the Ethernet switch supports the following PoE standards: IEEE 802.3at and 802.3af).

Hardware
Inside the case (which can easily be opened by removing the three screws from the rear side), TRENDnet has equipped the TPE-LG80 with four MNC G4813CG 1824X Integrated Circuits, an Anpec Electronics APW7313 VU6HP 3A Synchronous Buck Converter, a 7AAVV4U LM5575 SIMPLE SWITCHER® Buck Regulator, a NXP 74HC1640 CRX79403 Semiconductor, a Fremont Micro Devices FT24C16A 8P6NMC IC and an IC Plus IP210TB chipset. Unfortunately, I couldn’t remove the two heat sinks from the main chips since the manufacturer decided to solder them to the PCB.

Features and Setup
If you ignore the DIP switch area (which is probably the most important element implemented of this device), then the TPE-LG80 will function as a regular unmanaged switch which works in a Plug and Play manner: you simply connect PoE / PoE+ devices to the switch and you’re good to go – but, that would be a shame since the TPE-LG80 can do so much more. The device is marketed as a ‘Long Range’ PoE+ Ethernet switch, so, by pushing the first DIP switch (1) to the On position, it will activate the LR function on the first and second LAN port, which means that any PoE+ device will maintain a 10 Mbps throughput if the cable is up to 656 feet (or 200 meters).

Let’s not forget that the default maximum distance is around 328 feet, so this little switch doubles that reach and delivers a higher degree of flexibility in choosing the proper place to install your PoE devices – I noticed that this technology isn’t really implemented that often and I only saw it on some Edimax Ethernet switches (which works pretty much in an identical way) or with Planet Technology (its devices supports a greater distance, but they’re also less budget-friendly). 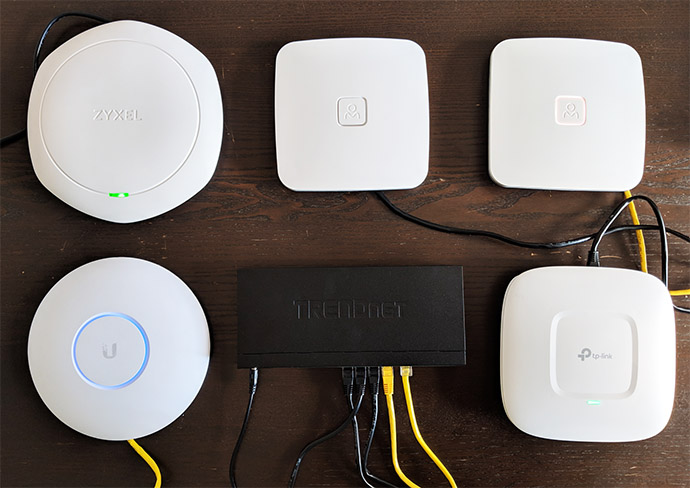 Lastly, there’s the eight DIP switch which enables the VLAN port isolation feature to the port five to seven – make sure that you don’t enable the DIP switch 3 and 8 at the same time and, after making any changes to the DIP switch, you need to reboot the TRENDnet TPE-LG80 in order to apply the new settings.
Note: You don’t have to worry about what DIP switch does what because TRENDnet has put a label with the instructions on the bottom side of the device. 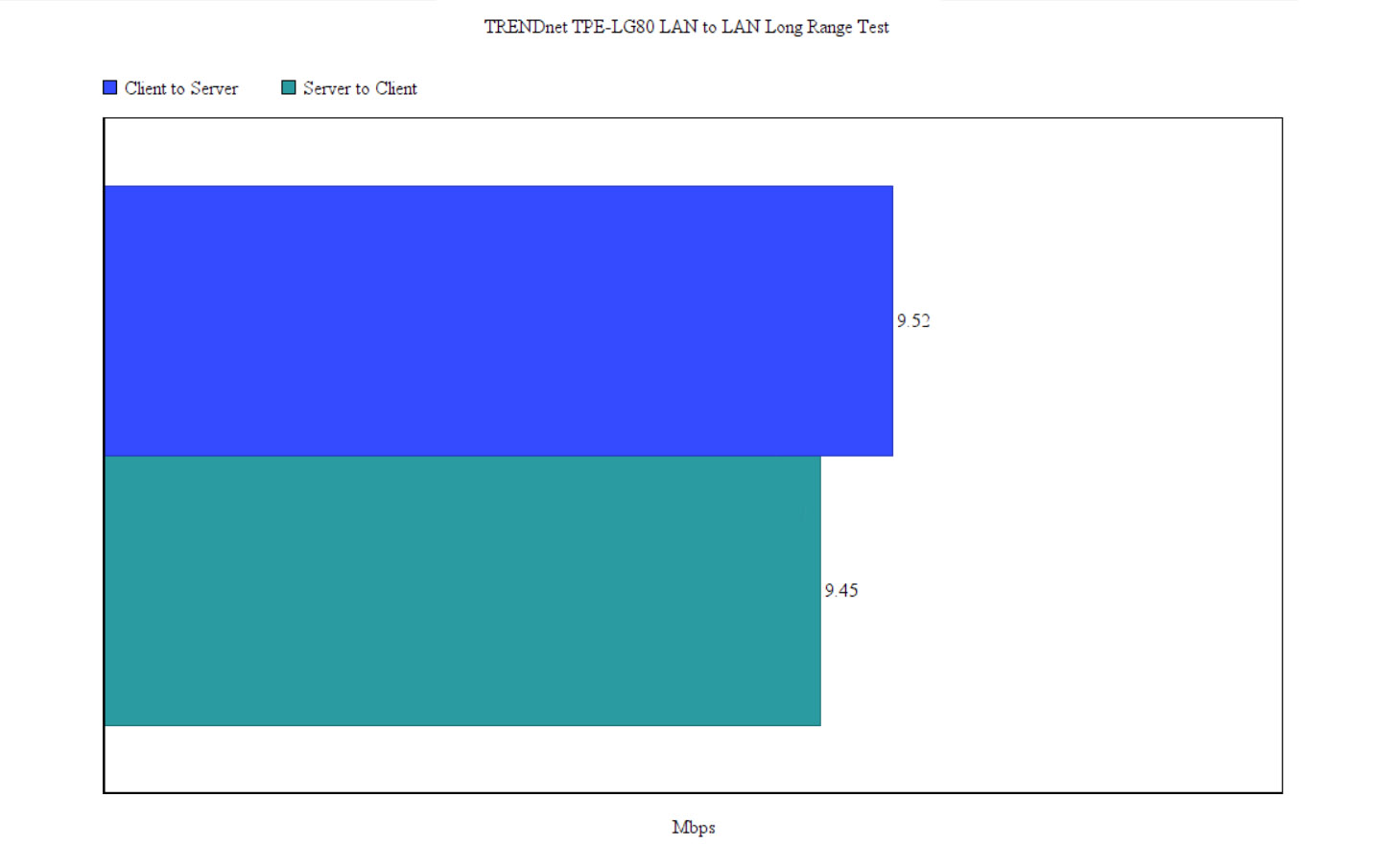 To test the TRENDnet long range claim, I took two computers and I connected both to the switch and I enabled the LR function for the first two ports (DIP switch 1): for the first PC, I used a 65 foot cable (20 m), while between the Ethernet switch and the second computer, I used a 560-foot cable (approx. 170 m). This way, from the client to the server, I measured an average of 9.52 Mbps, while from the server to the client, I got 9.45 Mbps which is in line with what TRENDnet claims (the advertised 10 Mbps without overhead).

Conclusion
The unmanaged Ethernet switches have a special place on the market, allowing the user to gain more ports while requiring nothing more than the connection of a few cables and, while TRENDnet TPE-LG80 does fall in this category, it offers something that its competitors do not: the Long Range function that expands the PoE+ signal up to 656 feet on 7 of its 8 ports, QoS and VLAN port isolation, all that in a fanless compact case. 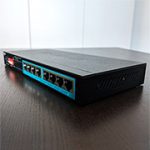