The Kyvol E20 is an entry-level model from the Cybovac E series (there are quite a few models available in each series) and, while it is a seemingly no-frills robot vacuum cleaner, there is a bit more than meets the eye.

And that’s mostly in regards to the WiFi capabilities along with the mobile app support, while everything else is in line with today’s expectations from a reliable, yet inexpensive robot vacuum cleaner. Sure enough, the Kyvol E20 does not use Lidar to navigate the house, but a simple combination of IR sensors (cliff sensors to detect stairs, bump sensors are all there). The device also has a fairly good suction power (2000Pa) – worry not because the design of the brushes has often been deemed a more powerful factor for a good cleaning – and it does have a 3200mAh battery which should ensure more than two hours of cleaning time. 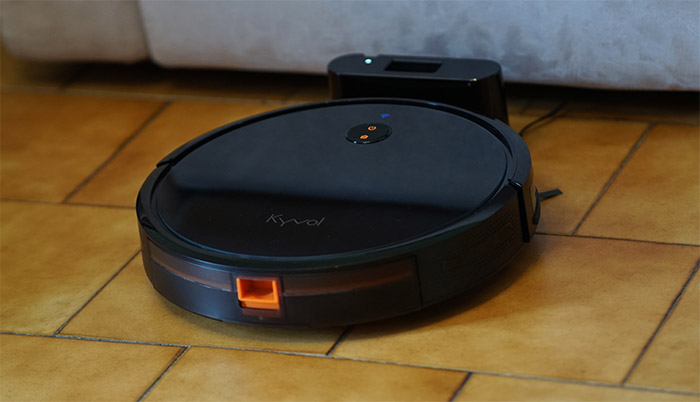 I know that the Kyvol E20 may not take you as close to the fully autonomous house cleaning ideal as other, far more expensive devices (such as the Lydsto R1), but it should be more than suitable for a smaller house where multi-level mapping, a mop mode or any other advanced feature may not be necessary. Even so, The E20 will offer the possibility to create schedules, to set no-go zones (using magnetic bands) and it can return to base when the battery gets low, so let’s check it out and see if it’s a good option when compared to its competitors.

The Kyvol Cybovac E20 sports a fairly minimalist design, featuring a plastic case covered by a black matte finish, with the exception of the top which is covered by actual glass (so, it is a bit of a fingerprint magnet). And yes, the case is round as every other robot vacuum cleaner available, but the E20 does have an advantage that most other devices don’t: it’s not very tall. Indeed, at its 12.6 x 2.8 inches (or 32.0 x 7.2 cm), the robot vacuum cleaner has enough of a low profile to easily go underneath the furniture. As you can see, there are no Lidar sensors or anything of the sorts at the top, but a single round button that you can press to return the device to its docking station or power it on (start the cleaning process). 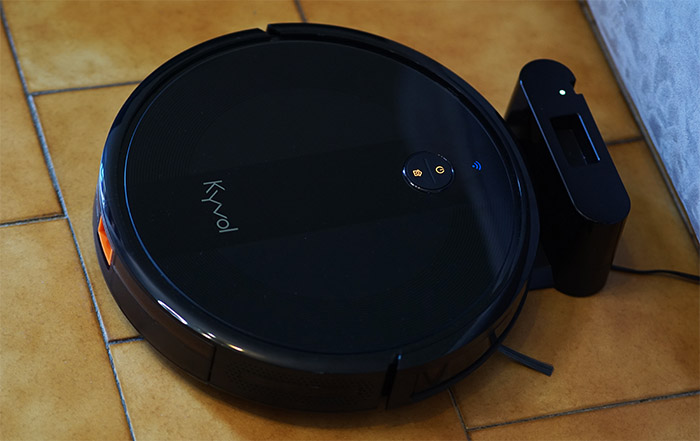 There is also a WiFi LED which, along with the button LED, will flash orange while the robot vacuum cleaner is charging and will become solid blue after it’s fully charged. The LEDs will get solid orange on low battery and will flash red when the battery is critically low.
On the front of the Kyvol E20, there’s the bumper (it surrounds the device up to 180 degrees) which has some built-in infrared sensors and, next to the bumper, there are a couple of additional IR sensors and air outlets. These are obviously used to detect the surrounding objects and limit the bumper contact to the minimum. On the bottom of the robot vacuum cleaner, there are a couple of anti-drop sensors that work really well at detecting stairs (the device will run towards the steps at full speed, but it has always stopped immediately after the sensors have detected that the ground is gone). There are also a couple of hall sensors which have the role of detecting the magnetic band that can be used to create no-go zones for the vacuum cleaner.

Still on the bottom of the E20, you can see two, fairly large spring-operated wheels that can retract independently for slightly uneven surfaces and there’s also a caster that moves around 360 degrees. There are also two connectors for the side brushes and yes, there are two of them, while the vast majority of robot vacuum cleaners only have one – inside the package, Kyvol has added four side brushes (so you have two spare parts). There is the mandatory main brush that can be detached and thoroughly cleaned, and it’s surprisingly similar to the brush on the Lydsto R1 (the detachment mechanism is also essentially the same). Furthermore, I noticed an On/Off button which I’m not entirely sure it’s necessary considering that you could simply turn on or off the device using the top button, but Kyvol thought otherwise. 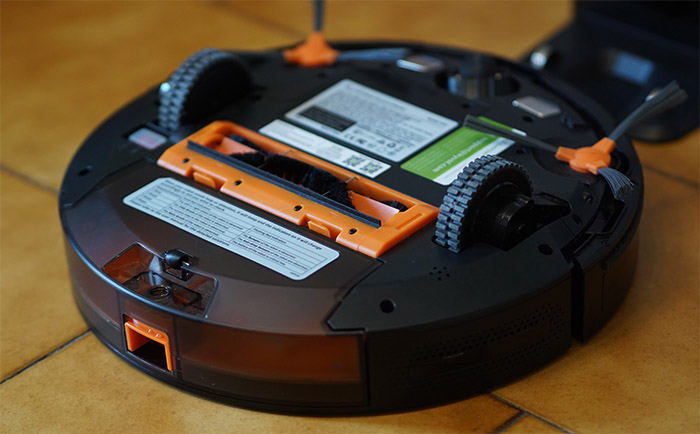 On the bottom of the robot vacuum cleaner, you’ll notice that there is an opening where you can insert your finger and detach the dust bin (again, the mechanism is identical to what I saw on the Lydsto R1). The container is fairly easy to clean and there is a HEPA filter already attached (there’s a spare in the package).
Since I already mentioned the Lydsto R1 a few times, it’s worth saying that it had a built-in speaker that would let the user know about the status of the device. The Kyvol E20 does have a similar system in place, only less sophisticated: there’s a small speaker that will beep once if the right or left wheel is broken or stuck and it will let out two beeps if the side brushes are in abnormal conditions (if the LED flashes red, then the bumper has encountered a problem). Three beeps will let you know that there is a problem with the suction inlet (or the anti-drop sensor if the LED flashes red) and four beeps means there’s a problems with the main brush.

The Kyvol E20 has a fairly small docking station made of plastic covered by a black matte finish and, at the top, there’s a small holder for the remote control, if you like to keep it next to the vacuum cleaner (so you won’t lose it). 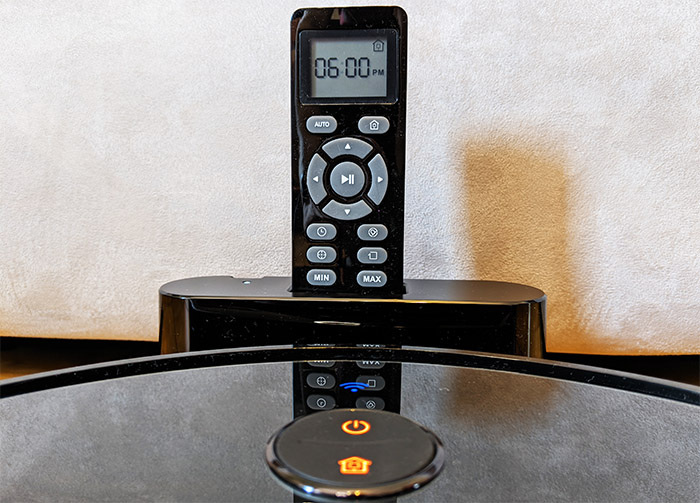 The docking station has two metal contacts that are used to charge up the E20 and, at the top, there’s a bright white LED which will remain operational as long as you have the power cable connected to a wall socket. Since it’s very lightweight and the E20 moves around at elevated speed, it’s going to be thrown around by the robot vacuum cleaner, unless you put it next to the wall.

The Cybovac E20 comes with a remote control in the package and, since it doesn’t have support for creating a virtual map of your house, it could suffice for some users. But, for those that don’t want to go old-school, there is a mobile application available called Kyvol that you can download and install on either your Android OS smartphone or an iPhone. After installing the app, I immediately noticed that it does require access to your device’s location for detecting the network – didn’t really like the idea, but I did try pairing the E20 without this permission and it failed. So, after allowing access to everything the app needed (sigh), I was asked to create a new account (country, email and password) and then I could Add a new Device. 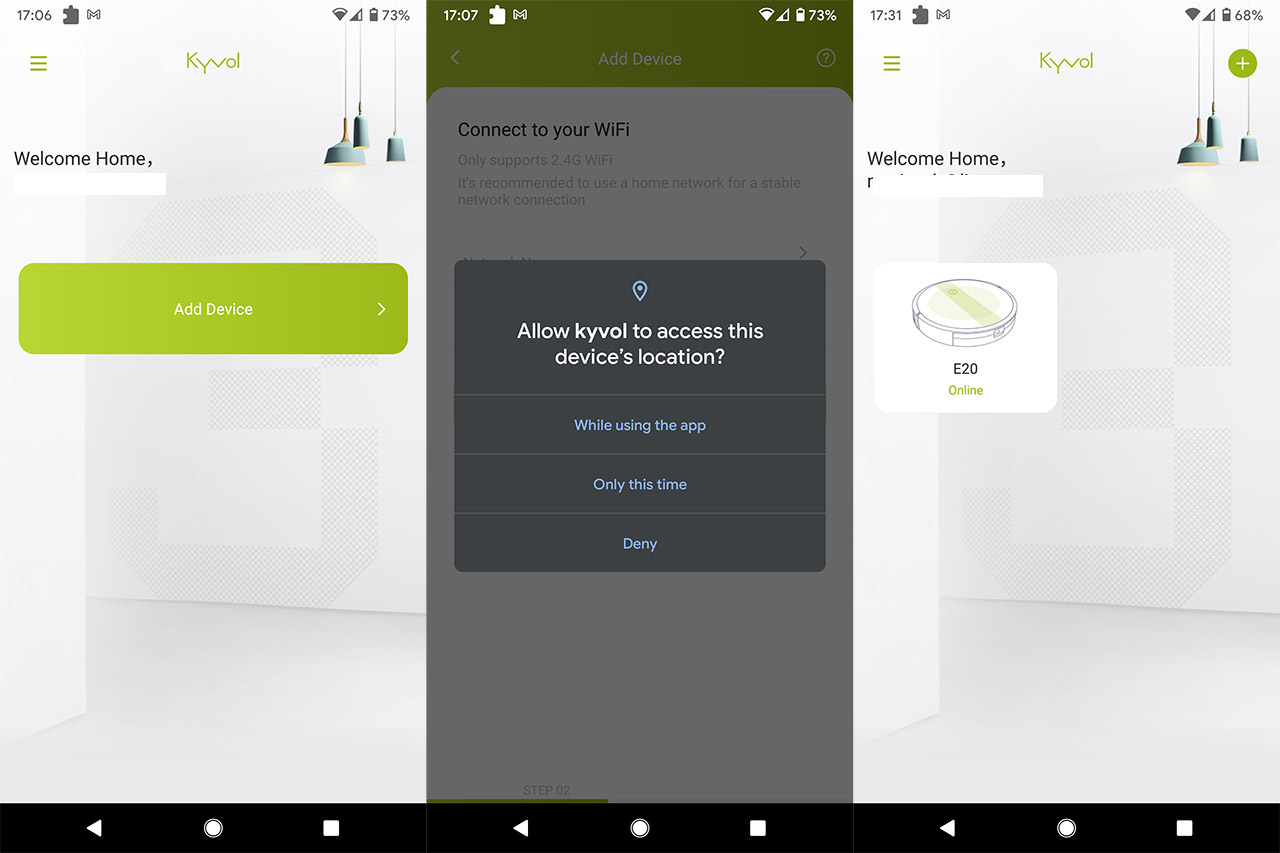 Before moving forward, this is a good time to power on the E20 and to do so, take it out of the package, remove the stoppers that keep the bumper in place and, from the bottom, move the switch to On. Attach the device to its charging station and return to the app.
At this point, I had two options available, one is the Standard mode where the Kyvol E20 will directly pair with the app through the router or by connecting to the SSID broadcasted by the robot vacuum cleaner. I went with the former and, as you can see, I was asked whether the WiFi LED flashes quickly. And it didn’t, it was flashing slowly, so I had to press and hold both the Home and Start buttons at the same time until I heard two beeps. The LED started flashing quickly and, from the app, I selected the 2.4GHz network which lead to the E20 to appear as Online. 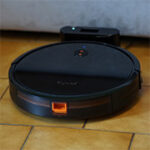