The Annke C800 is a 4K outdoor camera that can be powered using PoE and it’s available in three different shapes; it can be a turret, a dome or bullet-shaped. I have the dome C800, but all three cameras are rugged enough to survive the outdoors conditions (the IP67 certification).

Furthermore, Annke has made sure that during the day, you can get a detailed view of its surroundings and, for the night vision, it made use of the EXIR technology to ensure that the darker areas are lighten up. This means that there is no way to hide from this camera even if it’s very dark outside. The EXIR predates the NightChroma technology that we saw with the NC400 which was capable of displaying a colored night video without relying on a spotlight and, while it’s not implemented on the C800, you can see this amazing tech in action on the new 4K camera NC800. 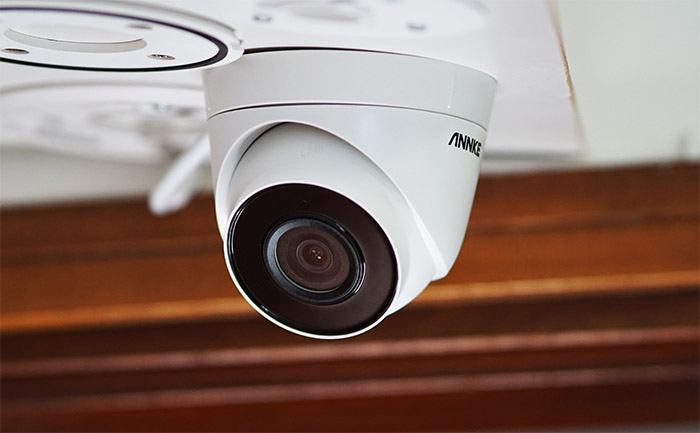 Besides the improved night vision, C800 supports the H.265+ video format which is great for keeping the files smaller, but without affecting the video quality and Annke has also added a noise-canceling microphone. A mike is always a welcomed addition on a security camera and the noise-canceling tech should help make the voices clear, especially if you live on a busy street. Of course, the support for RTSP and ONVIF are also present on the C800, so you should have no trouble integrating the camera with most third-party software and NVRs. That being said, it seems we get a fairly complete package for the money, so let’s check out the Annke C800 a bit more in detail and see if it’s suitable for ensuring the safety of your home.

After I took the turret-shaped Annke C800 from the package, I immediately noticed that it looked very similar to the Annke C500, another PoE camera that I tested a few months back and, at a closer inspection, they do indeed look almost identical. The only difference that I could spot was the ‘Setting’ plastic cover that’s screwed to the top of the camera (for the microSD card slot and the Reset button – there’s a special key in the package to open the cover), while everything else is seemingly the same.

So, you get a plastic base made of two parts, a detachable bracket that you need to use to mount the camera on the wall or ceiling and the upper base which keeps the main camera body in place and allows a certain amount of movement. Unfortunately, there are no motors to move the camera from the app, so any angle adjustment needs to be done manually. Within the base, there is the ceramic coated metallic case of the camera, sporting a fairly large front section for the lens. And, this section is black, while the entire device is covered by a white matte finish, to not stand out too much from the wall or ceiling.
Within the aforementioned black section, there’s the Sony IMX274 image sensor, the microphone and, if you cover the sensor, the two IR LEDs will shine underneath it.

Even though the size of a security camera may not be that important (probably, the bigger, the better), it’s still worth mentioning that the C800 measures 4.3 x 3.7 inches (same as the C800). As perhaps all other Annke cameras, the C800 is a rebranded Hikvision camera (to be more specific, it seems to be the SP-APHD97A-8M), so both devices should share the same hardware, but not the software, obviously. I decided to open up the case of the C800 to make sure that the hardware is indeed identical and, to do so, I had to remove the three screws on the bottom. And, after detaching the power connector, I got a better view of the first PCB and I could see the MNC H16111CE 2103X 100Mps switch chip and a CM8-001R 2037 common mode choke. 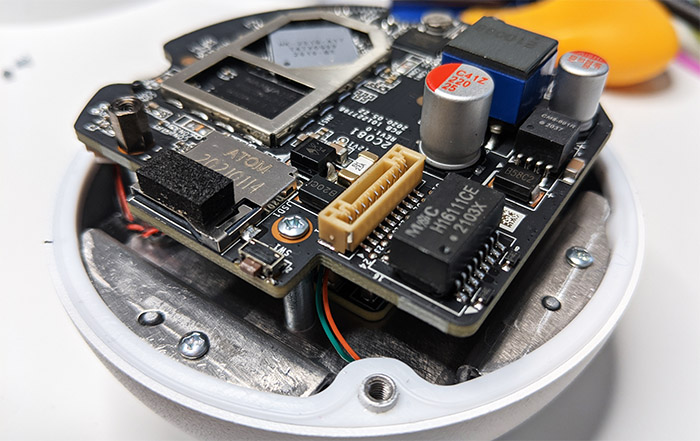 After removing the metallic cover, I could also see what seems to be a quad-core Cortex A17 CPU (HK-2019-A17 T4TX6900 2010-BS), 128MB of flash memory from Winbond (25N01GVZEIG) and 256MB of RAM from Nanya (2052 NT5CC128M16JR-EK). I could go on and detach the top PCB to access the second one and see the lens, but I already checked the main components, so I let it be. After putting everything back together, I saw that there is a concealed seal between the two metallic parts and it’s there to ensure that neither water, nor dust can enter the enclosure. Indeed, the device is IP67-rated, so it should survive most outdoors conditions – besides the dust and water protection, the C800 should also remain operational when the temperature is between -22 to 140 degrees F (or -30 to 60 degrees C), so it will fare fine even during those harsher winters (which are less often nowadays).

At the bottom of the camera, you will notice a permanently attached cable which is divided into two smaller cables: one is for connecting the Annke C800 to a PoE switch or directly to a router and the other is for connecting the camera to a power adapter. Inside the package, you won’t find an Ethernet cable, nor a power adapter, so Annke doesn’t persuade you to go either way (although PoE is clearly the superior option, especially for the outdoors), but the manufacturer has added a waterproof lid for the Ethernet cable. 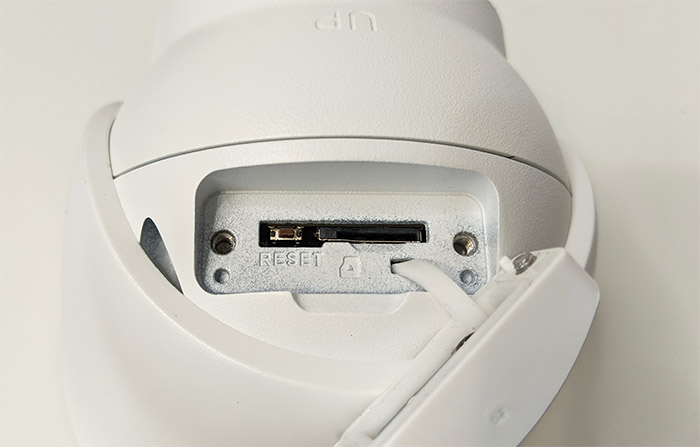 The Annke C800 does not support a WiFi connection, so you have to directly attach it to your router and this can be done in two ways. Either get a power adapter and an Ethernet cable, and connect the camera to the router and a wall socket or use a single Ethernet cable and a PoE switch or PoE adapter to power on the C800. Since I don’t like too many cables outdoors, especially power cables, I preferred using PoE, so I connected the C800 to a TRENDnet TPE-LG80.

Afterwards, I opened the Annke Vision app (I already had it installed from when I tested the NC400 and the C500) and then I tapped on the Plus sign to add the C800 – there are two options to do so, either by scanning a QR code or by manually inserting the serial number. Since the Annke C800 doesn’t have a QR code, I used the latter option and, after selecting the device type (wired camera), it required a Device Password to activate the C800. Moving forward, I set a Verification Code, so that the videos are automatically encrypted (don’t lose this code) and I got the Adding completed message. 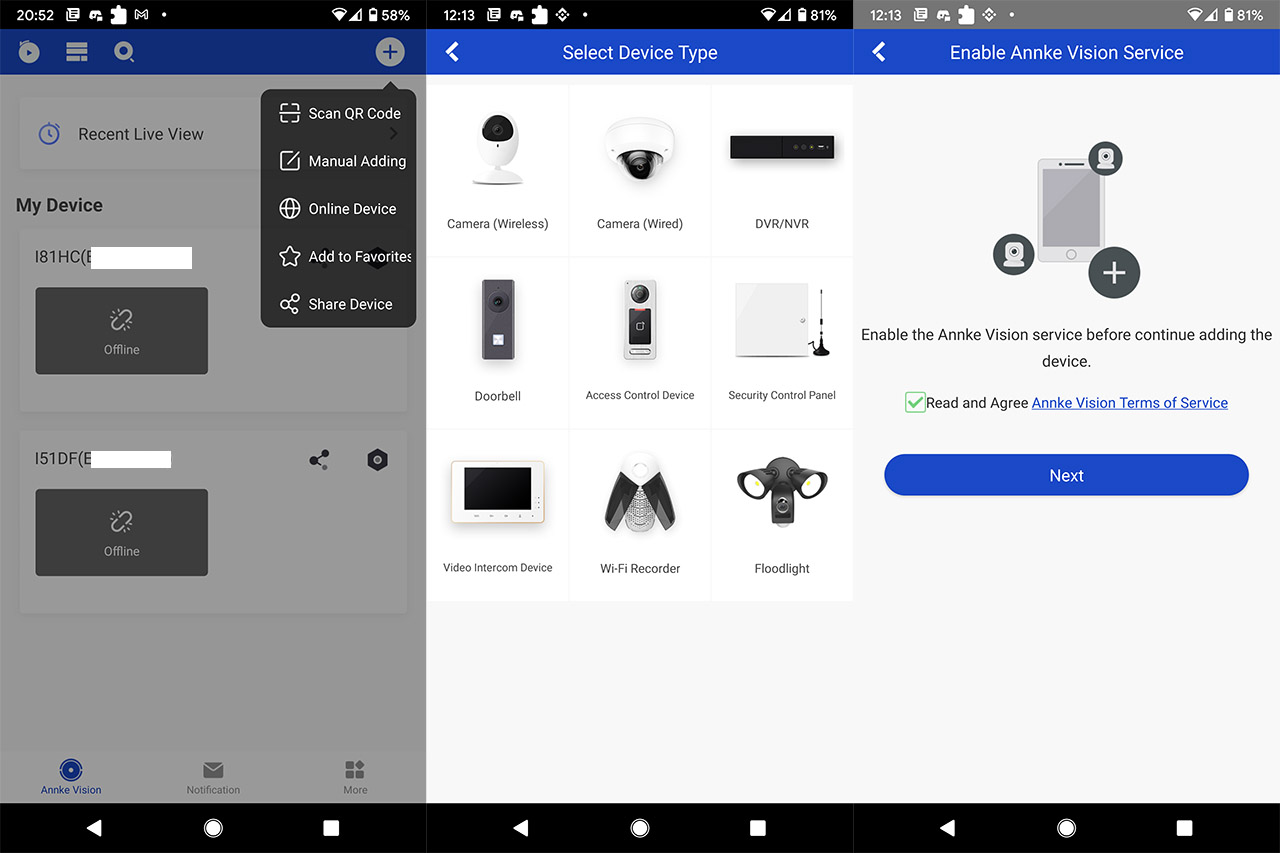 The app GUI is relatively simple, showing the live footage in the middle, while immediately underneath, you get to select how many cameras you want to view at the same time (can go up to 16 – obviously, this is going to work great if you have a larger tablet). Further down, you can select the image quality which comes as Basic, Standard or HD. I can only assume that HD stands for the highest resolution available since I have set the image quality to 4K from the web-based interface and I took a video using the HD mode and indeed, the resolution was set to 3840x2160p. Be aware that the higher the resolution, the higher the bitrate, but, since the connection is cabled and the link is made at 100Mbps, it shouldn’t be a problem for any router released in the past 10 years (or more).

At the maximum video quality, there is a noticeable lag of about 1 second and a half during both the day and the night. Next to the image quality icon, you can use the digital zoom icon (it zooms up to three times), capture a photo, start recording a video, pause the live view, enable the alarm (?) which would give me Operation failed and flipping the screen. 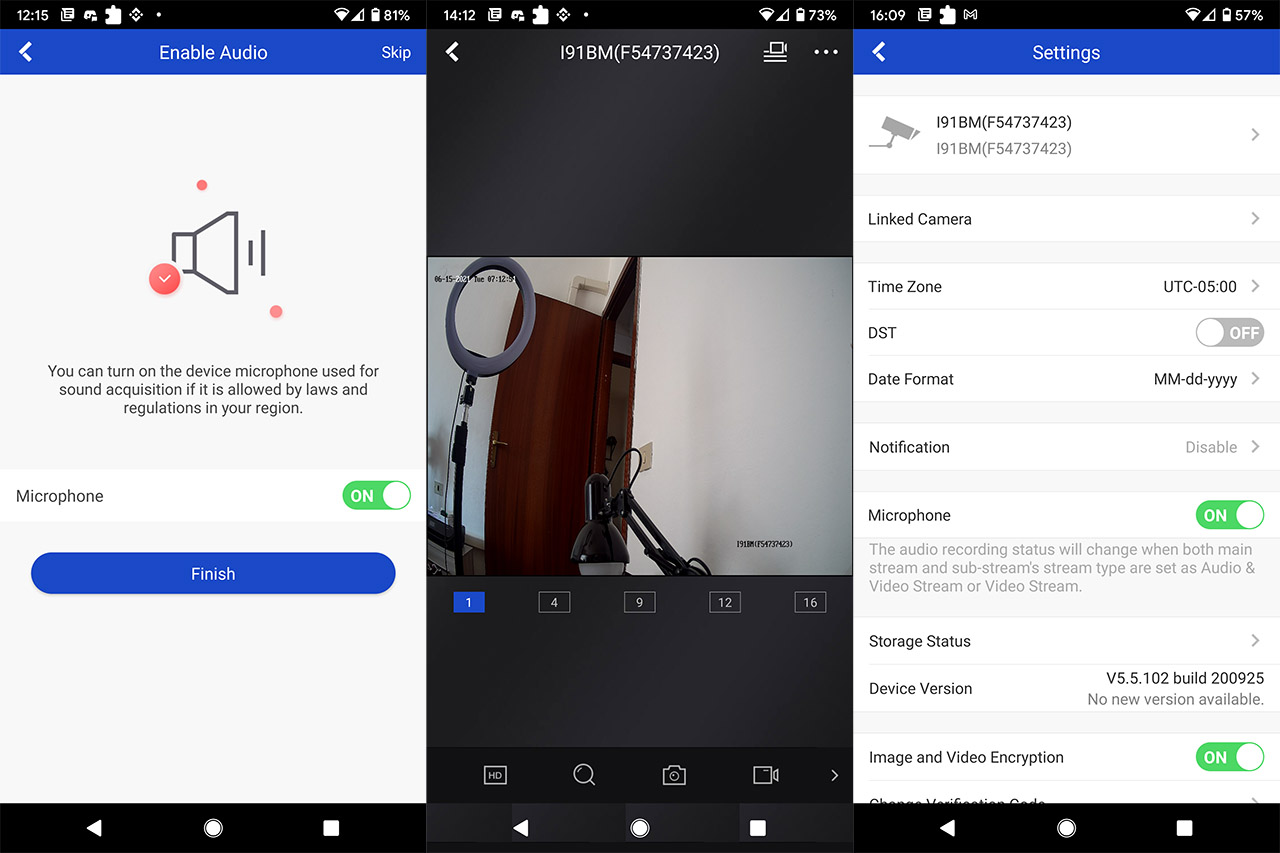 The last option will allow you to select the noise reduction level for the footage. If you tap on the three dots on the top right corner, it will summon four more options, the first allowing you to check the footage that’s saved on your SD card or HDD (the device supports SD cards up to 128GB which is acceptable). The second and the fourth options are for Sharing the device with other people or Add it to favorites, while the third option allows you to change the Settings. But, don’t get your hopes too high, because there’s only a limited amount of options – the good stuff can be found on the web-based UI. Still, you get to enable the Image and Video Encryption, the Microphone, configure the Notifications and set up the DDNS. 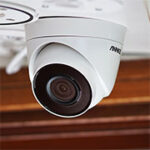