The Marchpower foldable standing fan was developed to cater to the needs of the people that travel a lot and need some relief from a hot and humid climate. And the device follows closely in the footsteps of other portable fans, such as the Elegear portable fan that I recently tested, but it does seem to add some improvements to this concept as well. Out-of-the-box, the Marchpower fan comes already folded and it’s compact enough to fit inside a small bag (that you do get in the package). 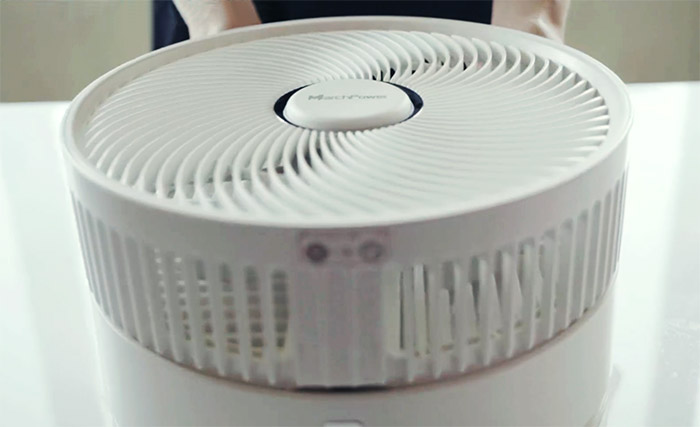 And it’s a slightly different folding concept than what I saw with the Elegear fan since the base has a hole to allow the telescopic arm to rest within it, while the blades section simply sits at the top. This makes the Marchpower foldable fan a bit more compact and indeed it is, measuring 9.0 x 9.0 x 5.6 inches, so it’s going to be a bit easier to carry the device around with you when you travel. That being said, one of the most interesting aspects of these types of fans is the adjustable height.

If you want to keep the fan on a desk, you only raise it slightly, but if the fan needs to reach higher and potentially farther, then the height of the fan will become more important. The problem is the higher it goes, the larger the base needs to be, so, just like the Elegear foldable fan, it’s possible to only raise the Marchpower fan up to 3 feet. Then again, you do have the option to change the angle at which the air is being blown, so it can reach a bit higher still.

The internal battery is 7,200mAh which is a bit smaller than the 7,800mAh of the Elegear fan, but the manufacturer has made sure that you can charge the Marchpower fan much quicker. The Elegear required about 4 hours, but the Marchpower fan can go from 0 to 50% in just 30 minutes. Obviously, there shouldn’t be that much of a difference in the battery performance between the two fans, so it’s nice to see that it’s possible to have a working fan for more than a couple of hours (at full speed) fairly quickly.

The controls on the base and the remote controls have also been changed, a bit. On the base of the fan, there was the Power button (you need to long press it for about 3 seconds), the Rotation mode, the Air volume, the Timer and the Sleep breeze mode. The Air volume has some LEDs to let you know at which level the fan is currently at (while Elegear had a digital display to handle this data) and the Timer also had four LEDs which are a bit misleading since they show 1, 2, 3 and 4 while the actual time will be 1, 2, 4 and 8 hours.

The five levels of air flow power are a bit different than the 9 levels on the Elegear, but it’s just to make the transition between modes more meaningful. The Sleep breeze mode is a new addition and it’s a separate mode which should apparently run a bit quieter than the default fan modes – if it’s like Elegear, it should be above 40dB. The remote control does address one of my main complaints that I had with the Elegear fan since it finally has an On/Off button.

This way, the remote is actually useful and not just an afterthought. The Marchpower fan blades are not the same as on the Elegear since they use a five-blades design for a more traditional look. Furthermore, in case you want to clean the blades, the opening mechanism is pretty much the same – you need to remove one screw and then rotate the front cover counter-clockwise, after which it should easily pop out. I really liked the Elegear portable fan, but the Marchpower fan has addressed some of the complaints that I had with the formerly mentioned model, but you won’t really go wrong with other devices. Just be aware that both are mostly made of plastic, so there is a tiny bit concern about the longevity of these fans.