Before going to the testing, I need to mention the MU-MIMO technology which seems to be mandatory on routers, while not so much on the client devices. But, if you do have compatible clients, MU-MIMO can help serve them at the same time, instead of having them compete for the bandwidth. Furthermore, there’s the BeamForming tech which helps focus the signal towards the client devices, therefore limiting the impact of interference is potentially improving the throughput. 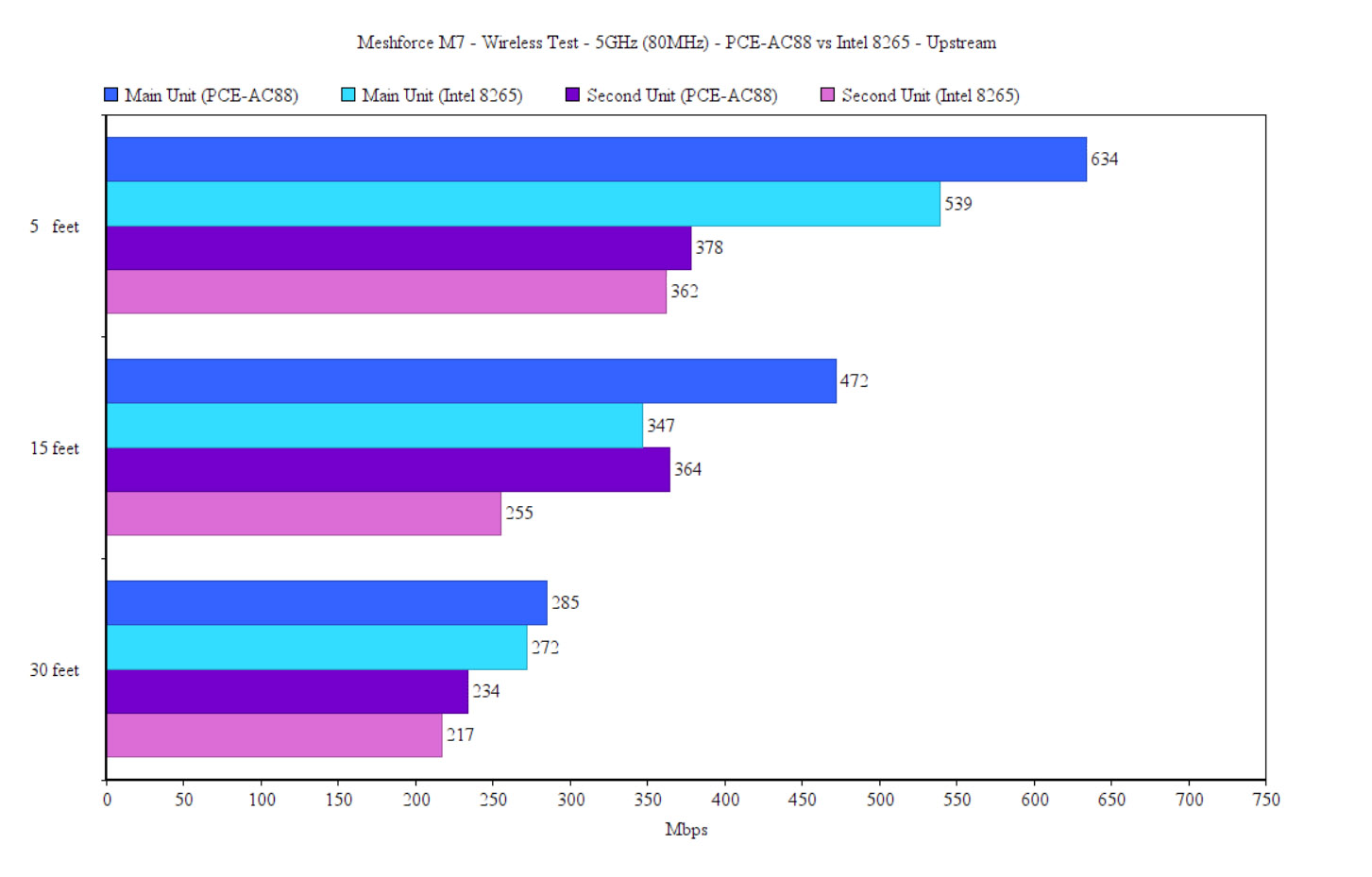 To test the wireless performance of the Meshforce M7, I first checked out the throughput that I got with a single unit. So, I connected a computer to the M7 unit using a cable (it will work as the server) and the client device was another computer that’s equipped with the PCE-AC88 WiFi 5 adapter. Since there is no way to divide the 2.4GHz from the 5GHz network, the client automatically connected to the 5GHz SSID (80MHz) and, upstream, I saw an average of 634Mbps at 5 feet and an average of 285Mbps at 30 feet. Downstream, I saw an average of 355Mbps at 5 feet an average of 168Mbps at 30 feet. Since I was unable to connect to the 2.4GHz band, I tried to set the WiFi adapter to work in 802.11n, but it would still use the 5GHz radio, so, to keep things as close to real life conditions as possible, I had to rely on an old client which only supported the channel bandwidth of up to 20MHz. 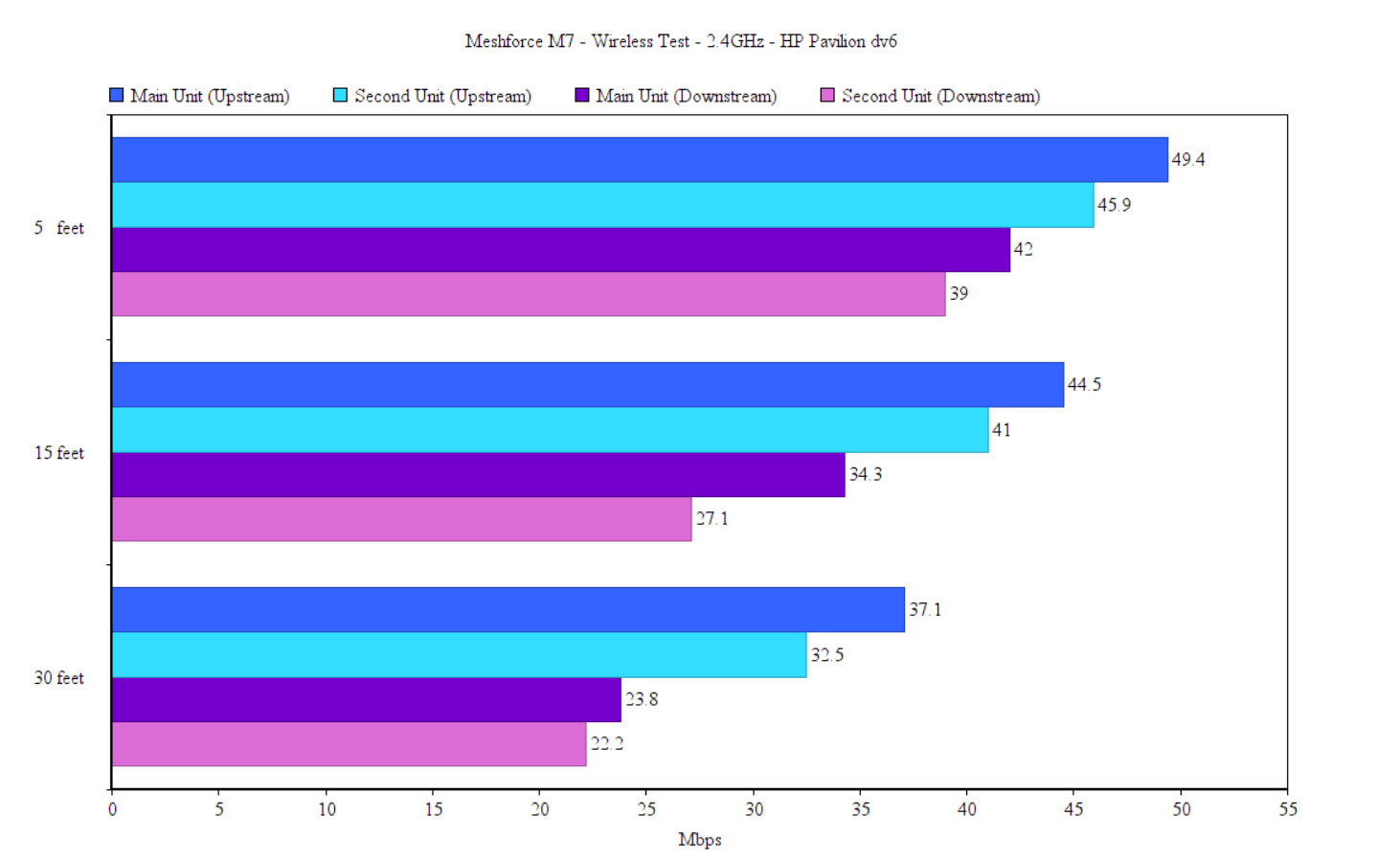 While close-by, it wasn’t that impressive, if you move far away from the secondary unit, you will still get a very similar performance as you would be next to the main Meshforce M7, which is great. Downstream, I saw the same behavior since at 5 feet, I got 216Mbps, while at 30 feet, the throughput was 151Mbps. This means that the dedicated 5GHz band indeed works. Not as good as on an Orbi, but still fairly impressive. I wanted to check out the double-hop performance, but, unfortunately, my current house is not big enough to get accurate results, but, the good news is that I should be moving to a larger office in a matter of weeks, so I will be able to test the two-hop performance. 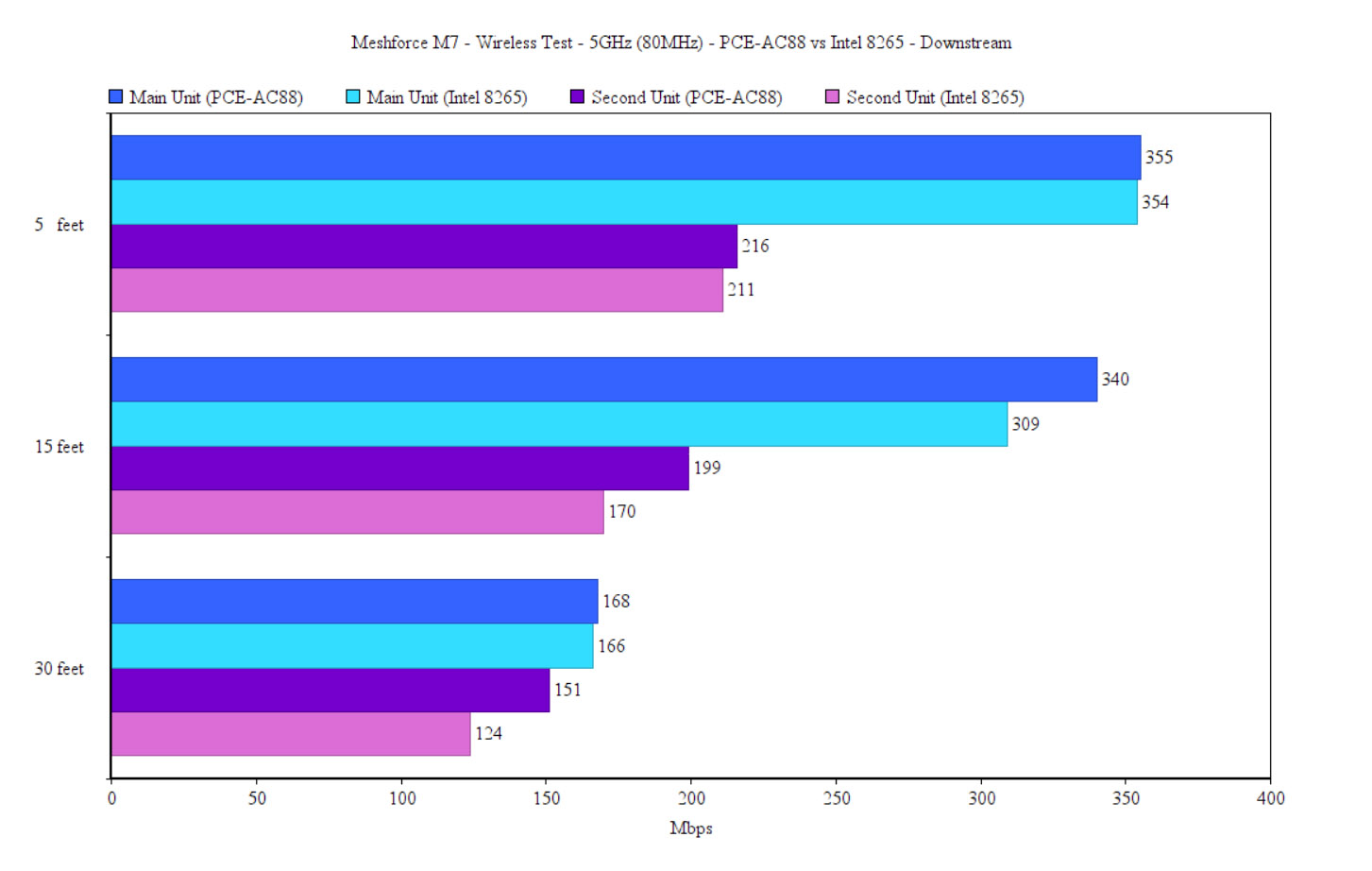 I tend to forget to do stuff for old projects when I am doing new projects, so pester me in the comments if I don’t test it (and if you’re actually interested in it). Also, be aware that Meshforce and other manufacturer want to persuade you to limit your use to a single hop (even the app shows a triangle) and that’s because the multi-hop performance is usually very poor, due to the strain from the backhaul traffic.
So, if used as intended, the third mesh node should deliver pretty much the same performance as the secondary unit if positioned on the other end of the house, with the main M7 in the middle. The last thing that I tested using a single mesh node was the LAN-to-LAN performance which was made easy due to the additional two LAN ports. Upstream, I measured an average of 949Mbps and downstream, I saw an average of 888Mbps.

Sadly, the Meshforce M7 does not have a web-based interface (thanks, Google), so everything needs to happen from a mobile application, including the initial configuration process. So, I opened the manual and scanned the QR code that they provided and I selected the ‘Download the App before start’ option. This way, I installed the My Mesh app (available for both iOS and Android OS) and after that, I was asked whether I want to allow Notifications to be sent to my smartphone. Next, I was asked to Agree or Disagree with their Terms of Privacy Policy and if I wanted to allow the app top detect and connect to devices in my network. 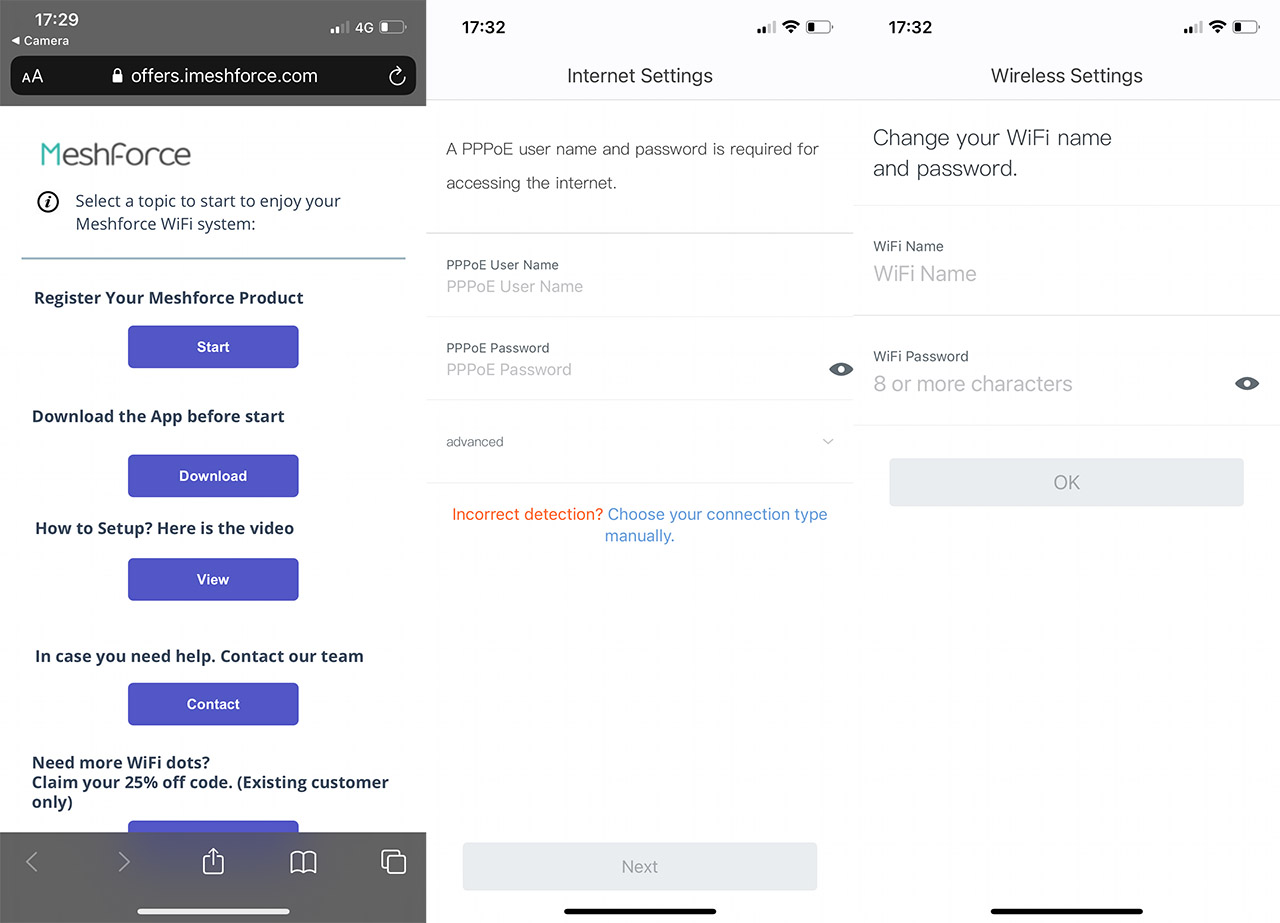 Afterwards, I had to connect to the SSID that was broadcasted and enter the password that can be found on the bottom of every M7 unit. A few seconds later, the router saw that I had a PPPoE connection, so I needed to enter the ISP user name and password and I was able to set the SSID and passkey for my new network. Yes, you only get one network and can’t divide it into two, not even later in the app. After that, I followed the instruction to add more mesh nodes and it seems that everything is done automatically.
All I had to do is to connect the additional two node to the Internet and they appeared in the app as online a couple of minutes later which is neat. Before getting full access to the app, I was asked if I wanted to create an account to manage the network from outside the home network and that’s when I realized that I got the same message when I installed the Speedefy KX45.

I assume that both apps were made by the same company and perhaps both devices as well. Anyway, the main window is My WiFi and here, you can see the nodes, each with the number of connected clients and if you tap on the main or secondary unit, you’ll be able to see more status info. Tapping on the Connected Devices tab at the bottom of the page will summon a list of all client devices and if you tap on any of them, it will take you to the dedicated page. There isn’t much going on here, as there’s only the possibility to add it to the Blacklist or to a Group. After returning to the main window, I selected the Settings page and here there are a few more options. But, the Wireless Settings only allow you to change the name and passkey, no other adjustments, there’s the possibility to create a Guest Network, again with no possibility for additional configuration. 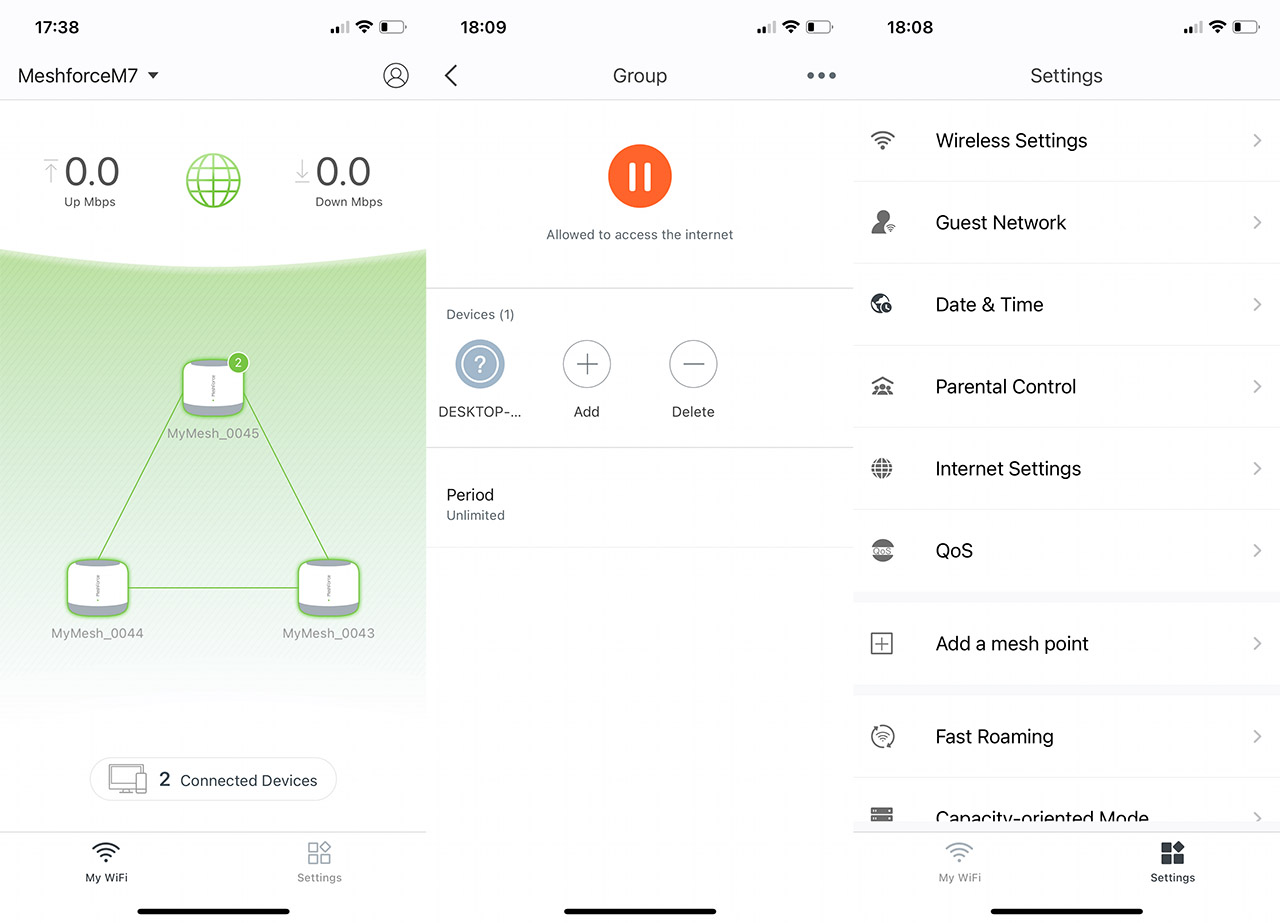 Further down, there’s the Parental Controls which controls Groups of devices and from what I saw there’s only the possibility to Pause the Internet or create scheduled access – no web filtering or anything of the sorts. I also noticed that the mesh system supports QoS which you can only enable and disable, and the manufacturer says that the router will automatically prioritize gaming devices and the web browsing. Further down, I saw that I could enable the Fast Roaming feature (802.11r) and the Capacity-oriented Mode which should be enabled when more than 30 client devices are connected to the WiFi system at the same time. I saw this feature on some Tenda routers and the concept seems to be the same: the throughput will become slower and the bandwidth will be limited, so the network doesn’t collapse. Don’t go above 30 devices since the Meshforce M7 won’t be able to handle them. Lastly, I need to mention the support for Port Forwarding, UPnP, DHCP Server, DNS and WPS.

I do consider that a good WiFi 5 router or mesh system is still the better choice for at least the next couple of years. And that’s because the newer standard is far from being widely adopted, from the client device perspective, obviously. So, is the Meshforce M7 good enough to outshine other older WiFi mesh system? The wireless performance was good using a single node and the dedicated backhaul band has really made a difference, especially when going farther from the mesh node. So in this sense, it can put out a fight with its main competitors. But, the software still needs some work. When you test a lot of networking devices, you start to have some (perhaps) niche expectations, so it’s best to borrow a friend and let them check out the software. The installation process is simple and the configuration seemed easy enough to satisfy the needs of a non-techy person. But, I do need to point out that the Parental Controls are very superficial and so is the QoS. Also, I know that everything is now done automatically, but I would have appreciated an Advanced section, where I can satisfy my need for in-depth configuration. Lastly, I need to mention the price which, for a three-unit tri-band mesh system is really good (better than most of its competitors) and this alone should persuade most people to give the Meshforce M7 a try. 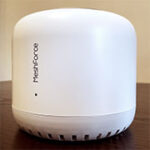