Netgear CM1000 is one of the first cable modems to support the new DOCSIS 3.1 technology, offering 32 downstream and 8 upstream channels for the DOCSIS 3.0 connection (as can be seen, the device is backwards compatible with DOCSIS 3.0) and 2 OFDMA downstream and 2 OFDMA upstream channels for the DOCSIS 3.1 connection, which allows its users to take advantage of the fastest download speed available from their Internet service providers.

DOCSIS 3.1 is slowly being implemented by the major cable providers in the US and it can open up the possibility to go past the Gigabit speed and towards a maximum of 10Gbps downstream capacity and 1Gbps for upstream. But, the transfer rate of the Netgear CM1000 is limited by its Gigabit Ethernet port to … well, 1Gbps. 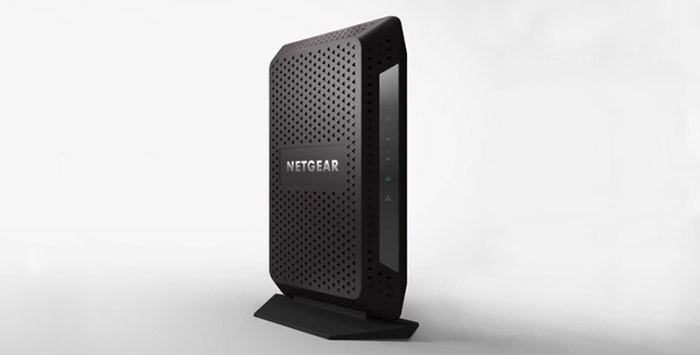 Sure, it lacks the bells and whistles of the SB8200 (such as, the dual-port setup which could, in the future, support link aggregation), but, regardless of that, the CM1000 will have a better behaviour (than most modems) if you live in an area with congested nodes, it promises to be a future-proof device and it is a good upgrade option for people that are looking to replace their older models (and try to avoid the modems equipped with Intel Puma 6), so let’s have a look at what it can deliver.

Design
Netgear CM1000 follows pretty close the design pattern of its predecessor, the CM700, featuring a polyhedron-shaped case, with soft corners and being covered by a black matte finish (does not retain fingerprints), but, unlike Arris (which makes it hard to distinguish between its cable modem line), it has made some changes that makes the CM1000 a bit more elegant than the CM700. The case is now completely covered by small triangular orifices (while the front of the CM700 was left untouched), the modem is now taller (measuring 8.8 x 5.4 x 5.9 inches versus the 6.6 x 5.2 x 1.7 inches of the CM700), the stand feels more solid and the LED indicators are moved to the left on the front side and are now positioned on a metal band. 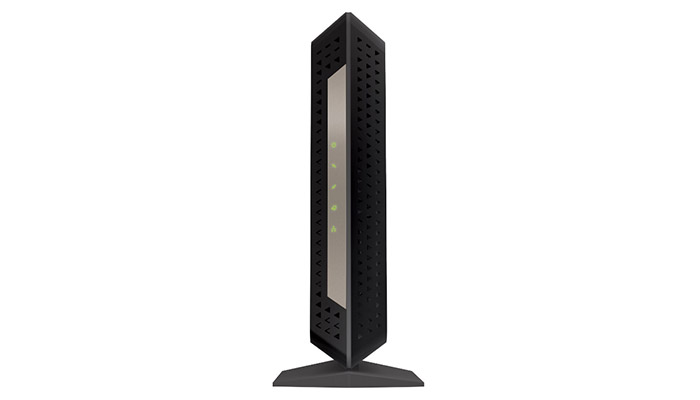 But, while, it has gained a few inches in height, the CM1000 remains a very lightweight device (0.84 lbs, which is a lot less than the 2.1 lbs of the Arris SB8200), meaning that it needs to have a larger and better stand to keep the modem from budging. But, I was left unimpressed with the provided pedestal, so, it is advisable to not put it near a heavy trafficked zone, or it may easily end up on the floor (on the plus side, the stand can be removed, all you have to do is remove a small screw from the bottom).

The CM1000 can only be positioned vertically, lacking the ability to be mounted on a wall and, while the SB8200 can be wall-mounted, I would suggest against this idea since both modems have a high potential of overheating (something normal for most recently released devices that feature a newly developed technology – until engineers find a better balance between power and hardware), so it’s best to ensure a proper airflow and not obstruct any ventilation holes. 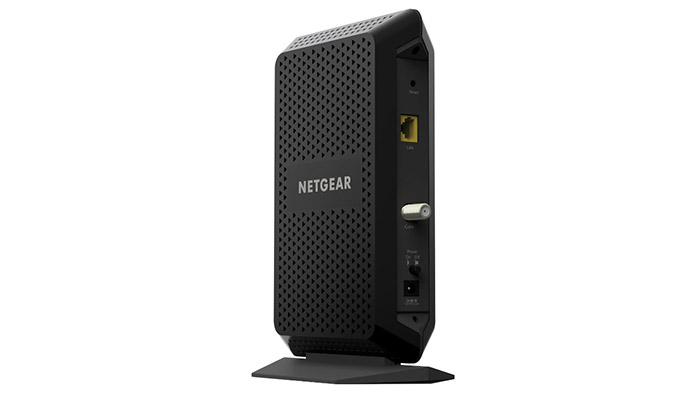 The rear side of the modem is home to a recessed Reset button (to restore the CM1000 to factory default settings, press and hold the Reset button for about 7 seconds, until all the LEDs blink), one LAN Gigabit Ethernet port, a Coaxial cable connector, a Power On/Off button and a Power adapter input. On the bottom of the device, glued to the stand, there’s a label which shows different types of info about the modem (such as the supported DOCSIS, the MAC address and the Serial Number). 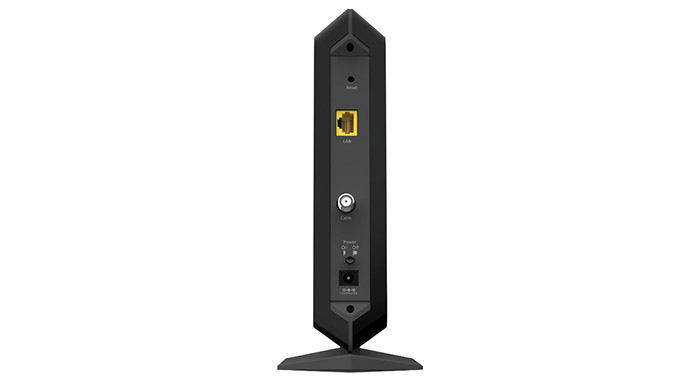 Note: Inside the package, there’s the Netgear CM1000 DOCSIS 3.1 cable modem unit, an Ethernet cable, a Quick Start Guide and a Power Adapter.

Hardware
Inside the case, Netgear CM1000 is equipped with a Broadcom BCM3390 chipset (the same as its current main competitor, Arris SB8200), 128 MB of flash memory and 256 MB of RAM. Netgear kind of did the same thing as Arris when it wrote in bold letters ‘up to 5Gbps’, but it has clarified in smaller fonts towards the bottom (just like Arris) that, in reality, you won’t be able to get more than 1Gbps out of the port.

Another interesting thing is that both the CM700 and CM1000 should address the same audience: people who can afford and live in areas where the ISPs can deliver 1Gbps download speeds. So, is the CM1000 really an upgrade over the CM700? Absolutely, mainly because Netgear wanted to be an early adopter of the new DOCSIS 3.1 technology, but this modem was also a necessity to help Netgear get over the Puma 6 incident. Yes, similarly to Arris SB6190, the CM700 is also equipped with the notorious Intel Puma 6 chipset, but, the impact was felt less than what Arris had to go through (and still has), since users held Arris in higher regard.

Compatibility and Performance
Although it was released earlier than SB8200, Netgear CM1000 is compatible with the same cable providers: Comcast (with XFinity) and Cox, while Charter should support it a bit later this year (I suspect because of the merging process with Time Warner Cable and Bright House Networks). It’s easy to know if you will be able to use this modem at its full potential or not (two supported ISPs), but, regardless of that, you should always check with your local provider before purchasing any modem (call them or check their website list) to see if it is supported and if you can take advantage of their highest speed available (right now, it is 1Gbps for download, but we should see higher rates in 2018).

Now, this is an expensive device, so should people give in and rent the modem from their ISP? Well, it depends. It’s true that the cost of the modem would be less traumatising if paid over a longer period of time, but, at the same time, the device will never be yours and, in reality, in less than two years you would have already paid it fully (and cable modems are usually used for many years before needing replacing). But, a rental has its own advantages, because you will get faster firmware updates and a better support (otherwise, your bought modem will always be the first to be blamed in case of network problems and updates may or may not come to fix some potentially important bugs).

If your data plan is 1Gbps, you should be able to see an average of 950 Mbps, but, like I said before, you should not expect anything above this rate because of the Ethernet port bottleneck even if, in the future, your cable provider may offer a better plan. This may disappoint a lot of users that may have hoped for a higher speed performance from a DOCSIS 3.1 device, but, even if the CM1000 takes advantage of some new technologies which are barely starting to be implemented, it is still a modem for the present time and maybe, with the near future in mind: the 1Gbps download speed is not something yet widespread, but it will be in, maybe 5 years and the bonded channels should ensure a better performance for people that are connected to overcrowded nodes (even if they’re not in the Gigabit tier right now).

Similarly to Arris SB8200, the CM1000 is just a cable modem and you will need an additional wireless router to connect any wireless devices to the network (a powerful AC1900+ router is advisable, but not mandatory).

Setup
The hardware installation process of the Netgear CM1000 involves connecting a coaxial cable to the modem (from the wall outlet or line splitter), attaching the power adapter to a wall outlet and to the port on the modem and connecting a computer to the CM1000 via an Ethernet cable (required for the installation process, afterwards, you can use a router to spread the Internet wirelessly or via wires). Now, wait until the modem comes online and proceed with the activation process (if you’re using Comcast XFinity, the activation is done automatically).

After you’ve activated the modem, you can access the web interface to further manage and monitor the device and the Internet connection, by going to https://192.168.100.1 (using a web browser) and, when asked to enter the user name and password, enter admin and password. The UI is divided into two main sections: Basic and Advanced. The Basic section features two sub-sections, Home and Cable Connection (displays the Frequency start Value, the Startup Procedure – Acquire Downstream Channel, Connectivity State, Boot State, Security and IP Provisioning Mode -, the Downstream Bonded Channels, the Upstream Bonded Channels and the Downstream and Upstream OFDM Channels), while the Advanced section features the ADVANCED Home and Administration (Modem Status, Set Password and Event Log).

Conclusion
The Netgear CM1000 is definitely the first step into the right direction for having a better, more stable speed performance and, while it may not be as compact as the Arris SB8200 (it also lacks the second Ethernet port), it is a more elegant device. Sure, this is definitely a future-proof cable modem, but taking into account the price of the CM1000 and the small availability of 1Gbps data plans, it may not (yet) be an attractive option for the average user (tech enthusiasts will appreciate it more). 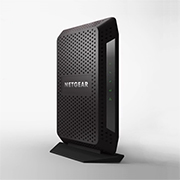