Netis WF2780 is a wireless AC1200 entry-level router, repeater and access point, all into one device, clearly targeting the home users audience. You may have not heard about Netis, since it’s not as well known as the other Chinese brands (like TP-Link), but, NETIS SYSTEMS is a global provider of networking devices, focusing on both the home and business sectors, with its products including wireless routers, switches, modems, wireless IP surveillance cameras, GPON terminals and powerline adapters.

While other router manufacturers have gone past the AC1900 milestone (and reached incredible heights: AC3200, AC5300 and even AD7200), Netis remained humble and consistently delivered budget-friendly solutions for home networks. That also seems to be the case for the inexpensive AC1200 Netis WF2780, so let’s see how it performs.
Note: Similarly to other manufacturers, Netis has had its fair share of controversy (with the backdoor vulnerability from 2014), but it seems to have moved past that point and recovered to a certain degree (the routers should now be safe to use, since the backdoor has been patched, but not completely removed).

Design
The Netis WF2780 is an attractive looking device, featuring a compact plastic case, covered by a black matte finish and four antennas sticking from the top of the device. The rectangular robust body is inflated in the middle, with lots of round vent holes on the left side and, on the right side, there are two big holes for wall mounting and a label, revealing info about the router (web utility address, default password, the MAC ID, the 2.4 and the 5GHz SSIDs). Besides the round vent holes, Netis has added some vent grills on the bottom as well (which won’t be of much help if you add the stand), but since the WF2780 won’t need a lot of power to function, it will be cool most of the time (the router needs and average of 5W).

The way the WF2780 is designed, reminds me a bit of the dynamic look of the Synology RT1900AC, especially because both routers can be positioned vertically and because of the way the sharp antennas point upwards (omni-directional, with 5 dBi gain, two for the 2.4GHz radio band and two for the 5GHz radio band). One minus would be the fact that the antennas cannot be removed, therefore you won’t get the chance to upgrade them. But, a plus point would be the way you can position the Netis WF2780: by default, the router can be positioned upwards, using the included round-cornered stand, but, the device can also be laid flat on a surface. Furthermore, if space is important to you (a common occurrence in offices), the WF2780 can also be mounted on a wall. if positioned upwards, the stand has a few rubber feet to protect the device from budging, but, since the router is rather small and lightweight (its dimensions are 5.7 x 6.1 x 1.3 inches and its weight is 0.62 lbs), if use all the ports, you may need to take some precautions, so the WF2780 doesn’t fall off the table.

If the router is kept upwards, towards the front, the plastic curves itself around the corner and reveals a set of LED lights along a transparent band made of plastic. The LEDs are responsible for LAN 1 to 4, WAN (if it’s flashing, then the data is being transmitted and received), 2.4G and 5G, SYS (shows that there is a power adapter connected to the router), WPS (if it’s flashing slowly, the WPS process has been initiated) and PWR. There have been some complaints that there are no indicator lights on the Ethernet ports, but the WF2780 does has a set of four LEDs on the front side that reveal the status of the connections. 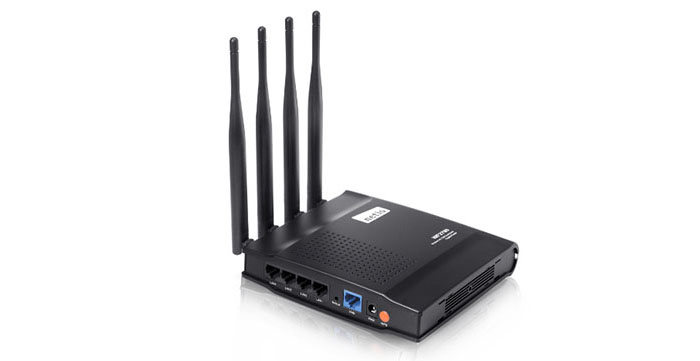 On the bottom of the router, there are lots of ports and buttons: there are four RJ-45 10/100/1000M Auto MDI/MDIX LAN ports, a recessed Default button (use a paperclip to press and hold the button between 2 to 6 seconds in order to return the router to the default factory configuration), a 10/100/1000M Auto MDI/MDIX RJ45 WAN port, a Power Socket and a big red WPS button. It’s a shame that Netis did not add an On/Off button or a switch to enable or disable the WiFi, but the real unfortunate omission is the fact that it doesn’t have a USB port.

Overall, the Netis WF2780 looks really good considering its price point, but there are some shortcomings that may raise some eyebrows (I have no idea why they didn’t at least include a USB 2.0 port).
Note: Inside the package, you can find the Netis WF2780 router unit, a 12V/1A Power Adapter, an Ethernet cable, a stand for vertical mounting and a Quick Installation Guide.

Performance and Connectivity
Netis hasn’t really implemented any ‘exotic’ features into its WF2780, you only get the concurrent dual band feature (which is important, since many router manufacturers at the price point of the WF2780 decided it’s better to make you choose between bands). Unfortunately, there is no Beamforming, which helped a lot with focusing the signal towards the connected clients, instead of broadcasting it everywhere and there is no MU-MIMO. I know what you’re thinking: why would I ever expect such a feature to be implemented into an AC1200 router? Well, you would be surprised that Asus already took this step with its AC1300 RT-ACHR13 (which now allows 2 to 3 devices to simultaneously transmit and receive data).

I know that this new tech can’t really be used with a large array of devices right now (since most lack a compatible wireless adapter), but, it makes the router more future-proof.
In order to test the wireless performance of the Netis WF2780, I connected a 3×3 laptop and measured the speed depending on the distance between the router and the client (the interferences were kept at a minimum, I kept the default 40MHz bandwidth mode when using the 2.4GHz radio band and for the 5GHz radio band, I used the 80MHz bandwidth mode).

So, using the 2.4GHz band, at close range (no more than 5 feet), I measured a maximum of 95 Mbps. At 15 feet, the router managed to deliver an average of 86 Mbps and at 60 feet, it maintained a speed of 34 Mbps. Afterwards, I switched to the 5GHz radio band (the 802.11ac standard) and, at close range, I measured a maximum of 276 Mbps. After increasing the distance between the router and the client, the speed decreased to 233 Mbps and at a longer range (around 60 feet), the speed took a steeper decrease to 35 Mbps.
To conclude the tests, I usually check the storage performance of the router, but since the Netis WF2780 doesn’t have a USB port, it is impossible to do so.

Setup
To properly setup the router you have to connect an Ethernet cable to the WAN port on the router and to the LAN port from your modem. Afterwards, use another Ethernet cable to connect your computer to the router using one of the LAN ports.
Netis allows you to configure your router through a web-based utility, which can be accessed by opening a browser page and going to https://netis.cc (before this, make sure that the IP address of your computer is set as Automatic or DHCP). If you visit the interface for the first time, you will have to go through the Quick Setup process: here, you can choose the language, select the Internet Connection Type (it can be DHCP, Static IP, PPoE and Other) and configure the wireless settings (which includes changing the SSID for each of the radio bands, enable the security and set a passkey).

The main page of the interface has the Quick Setup tab on the top right and the main menu is vertically aligned on the left, containing the following options: Status, Network, Wireless 2.4G, Wireless 5G, Bandwidth Control, Forwarding, Access Control, Dynamic DNS, Advanced, System Tools and Select Language. The Status section shows detailed info about the WAN and LAN connections, as well as about the Wireless 2.4 and 5G networks. The Network section lets you set the WAN type and change the WAN settings, configure the LAN IP address, the DHCP Server and the DHCP Client List, choose the IPTV Mode, configure the Address Reservation and choose the Operation Mode (Router or Bridge).

The Wireless 2.4G and 5G sections have pretty much the same options, the main ones being the Radio Mode (can be Access Point, Repeater, AP+WDS, WDS and Client), the Radio Band (combination between a/n/ac), the Channel and Channel Width and the AP Security Settings (the recommended settings are WPA2-PSK for the Authentication Type and AES or TKIP and AES for the Encryption Type). Furthermore, there’s also the MAC Filtering, the WPS Filtering, Multiple SSID, Wireless Advanced settings (Wireless Roaming, AP Isolation, Short GI, WMM, Protection and Transmit Power) and the Wireless Client List. The Bandwidth Control (QoS) section allows you to create Rules (for all or some hosts) that restrict or guarantee the uplink and downlink bandwidth.

The Forwarding section includes the following options: Virtual Servers (create Virtual Server Rules), DMZ, UPnP, Port Triggering (create rules based on the Trigger and Forward Protocol, as well as based on the Trigger and Forward Port) and FTP Private Port. The Access Control section includes the IP Filtering, the MAC Filtering and Domain Filtering. The Advanced Settings feature the following options: IGMP, VPN (enable PPTP Pass-through, L2TP and IPSEC Pass-through), WOL, ARP List, Static Routing and Port Setting. The System Tools allow you to perform a Firmware Upgrade, Backup and Restore, Diagnostic Tools, Remote Management, change the Time Settings and the Password, view Statistics and the System Log, Restart the System and return the router to Factory Default Settings.
Note: The Netis WF2780 is not compatible with Tomato, OpenWRT or DD-WRT.

Conclusion
The Netis WF2780 is a capable entry-level router which offers a nice transition towards the AC technology and while its simplicity is its strong point, it’s also its weakness. Sure enough, you’ll get an average wireless performance, a good interface and an attractive design, but there are some features that are missing, while its competitors haven’t missed the chance to include them. 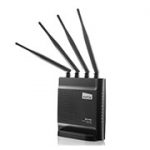