The Quntis solar spotlight is a compact device that, as its name suggests, uses a small solar panel to charge up a battery during the day and, with the help of a brightness sensor, it turns on the LEDs during the night. This way, your yard should be illuminated during the night without your input and without consuming anything from the grid.

It’s interesting to see that the solar spotlight is a device that only recently managed to enter the market and it was an instant success for obvious reasons. But why did it took so long? Well, solar panels needed quite a few years to become more affordable. And this is the point in time when the manufacturers could use this awesome technology and push it from niche use to more common. 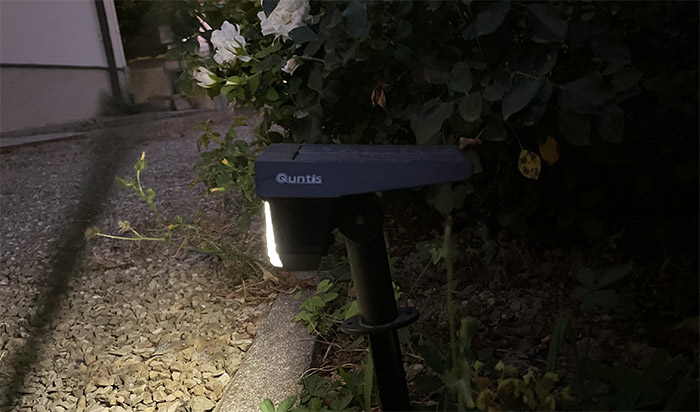 So yes, I have seen a surge of interest in the solar light fixtures, as well as for landscaping. These small spotlights don’t require cables, so you save a lot of money and some headaches to have electricity installed in your backyard. So, what’s the catch? The problem is obviously the battery life, both short-terms and long-term.

You want these lights to be reliable regardless of outdoor conditions (cloudy during the day means less hours of light during the night) and also to last for many years. Otherwise, what’s the point of using solar spotlights, if you need to replace them after only a couple of years – not a good investment. That being said, how does the Quntis solar spotlight address all of these concerns? Let’s find out.

The device is entirely made of plastic which makes sense considering the price tag, but it is also IP65-rated, so there is protection against dust ingrees. And there is also protection against powerful jets of water directed towards the enclosure. So, a storm should not affect the Quntis solar spotlight. I have not seen any mentions about how well it will do during the winter or if it’s very hot outside.

But I assume that the solar panel efficiency follows the standard value, which is about 77 degrees F (25 C) for peak performance. I have read some comments about the enclosure actually allowing water to enter, so I decided to let water run over one of the Quntis solar spotlight units. From the tap, since it hasn’t rained here properly in months – hurray for climate change. I let the water flow for about a minute and it doesn’t seem that any drop entered the enclosure.

The plastic case is well insulated, but I did check out the place where the front side is embedded within the enclosure and it does seem that the manufacturer may have used glue. Which is not a bad choice if they also added a silicone seal – if they didn’t then I see how, in time, the glue may allow water and dust to enter the spotlights. Quntis has put the small solar panel at the top and then the circuits and the LEDs are positioned immediately underneath, followed by an adjustable stand.

It can move to about 100 degrees and, as you can see from the photos, there are two holes to allow you to mount the Quntis solar spotlight on the wall. There are some screws in the package to easily do so. But, probably the most common way that people will use these spotlights is with the spike that you can insert into the ground. This is what I used for the units that I got and I prefer the less invasive nature of this approach.

At the top of the case, near the solar panel, the Quntis solar spotlight has a brightness sensor which, when it detects that it’s dim enough, it will automatically turn on the LEDs. If it’s too bright, the sensor will turn off the LEDs as well.

The Performance of the Quntis Solar Spotlight

Considering the current global conditions, I got a bit more conservative in regards to electricity use, especially during the night. And that’s because even if during the day, it’s possible to use solar panels, you need to draw power from a provider during the night. That is, unless you have a battery, but they’re expensive and a very bad investment at the moment, but that’s a story of another time.

The idea is that I do have some lights installed in my backyard. So, it was interesting to see just how well these small solar panel spotlights could do when compared to the traditional devices. One Quntis solar spotlight is advertised to be very bright during the night and the color temperature is said to be 6500K. And I won’t deny that the 24 LEDs are quite capable to cover a few feet in front of the solar spotlight.

But, due to the size of the device, you will need to use one spotlight every 10 feet if you want to properly light up a pathway. I positioned a couple of the Quntis solar spotlight units at a greater distance, as you can see in the photos and it was alright. They weren’t that much different than the wired light fixture with a 5W LED bulb that I had installed next to the solar spotlights.

The question if how long were they able to last. I started testing these devices about as month ago and I am in full summer here, so the days are very long and bright. And incredibly hot. So, the solar panel on the Quntis solar spotlight had no issue to easily charge up the inner battery. The spotlights would turn on at about 10PM and would turn off due to the brightness outside at about 4:50AM. So, I am currently getting about 7 hours of light at the low brightness setting (45%).

The maximum brightness is going to cut into this time, so, unless you only need 5-6 hours of light, I would keep the Quntis solar spotlight at the low brightness setting.

Are they worth it from a cost perspective?

So, if these solar spotlights can survive for at least 5 years, it’s a sound investment. And they should last for more, even if the batteries are fickle. We don’t need another reason to mass produce devices that will quickly be thrown away and end up in a pile, polluting the Earth. It’s not good for the environment, nor for our pockets.

I have used a few Quntis solar spotlights for about a month and so far, there is nothing to complain about. The solar panel works as intended since it allows for at least 7 hours of constant light during the night. The spotlights are easy to install and the possibility to switch between brightness levels is a welcomed addition. I can’t really say how long they will last, especially since you can’t replace the battery, but, should they last for at least three years, it does make sense to purchase them as an investment. 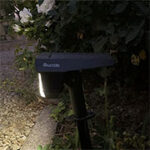