The Samsung 850 EVO has been a long time favourite and the go-to solution for most users because, similarly to its more expensive sibling, the 850 PRO, it took advantage of the 3D Vertical-NAND technology (which translates to a greater density and a better performance because of vertical stacking of the 32 cell layers), it had a better endurance than its predecessor (went from 72TB total bytes written of the 840 EVO to the current 150TB), it came with a longer warranty (5 years instead of the 3 years of the 840 EVO) and it was fast (true, not as fast as the 850 PRO, but not very far behind since both relied on the SATA III interface which has reached the maximum of its possible capacity).

Furthermore, the value for the money ratio made the 850 EVO the better option when compared to the PRO series, which could offer a better endurance and more warranty years, but nothing more. But, after basically dominating the SSD consumer market for about three years, the competitors caught up to the 800 series and Samsung has decided to replace the 850 EVO with the newer 860 EVO SSD, so, since I got both devices available for testing, let’s see if the latter is a significant upgrade over the 850 EVO and if the Korean manufacturer can still hold its place as one of the best makers of SSDs. 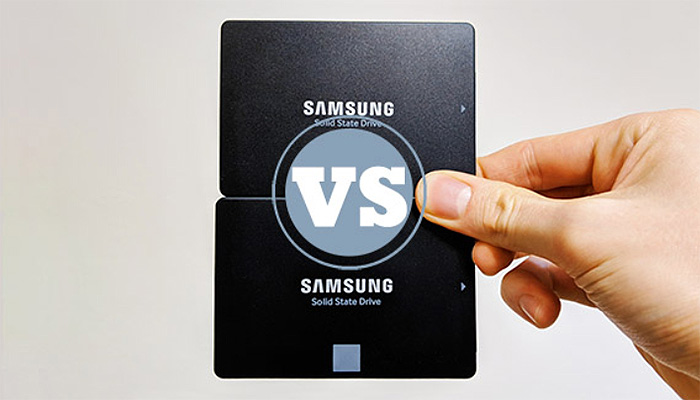 The first thing you’ll notice when browsing through the available 860 EVO models is that, in terms of storage, Samsung decided to get rid of the 120GB model and that’s not really a bad decision, since there are single games that can eat up that much by themselves (the 120GB 850 EVO was surprisingly popular and the manufacturers really were happy to add them to their laptops at a low cost and keep that SSD sticker, but, in 2018, it’s barely enough for the operating system). That being said, the 860 EVO starts from the 256 GB base model and goes up to 4TB; if you don’t want the 2.5-inch form factor SATA III device, Samsung does also provide three mSATA SSDs (250, 500 and 1,000 GB storage) and four M.2 SSDs (from 250GB to 2TB – while the 850 EVO went only up to 1TB).

One technology that both the 850 EVO and the 860 EVO share is the V-NAND 3bit MLC and, as I said before (in the introduction), this tech stacks 32 layers of 3bit cells one on top of the other, so, instead of going with the 2D model (where you could only go in length and width), the 3D model keeps a compact size and has two times the density of the previous model. So, Samsung left this unchanged, as well as the SATA III interface which, well, is still limited to 6Gb/s (apparently, this is the technical maximum, while the SSDs can actually achieve much higher speeds). What has changed is the controller which was upgraded from the MGX of the 850 EVO to the MJX, which will be able to communicate a lot faster with the host system and it features a much better compatibility with Linux OSes. 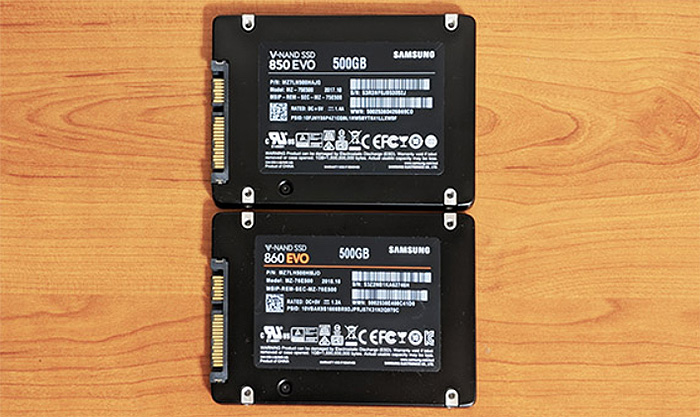 Furthermore, an important improvement is the cache memory which went from the 512 MB Low Power DDR3 from the 850 EVO to the 512 MB Low Power DDR4 SDRAM but, will that make any real life difference? You’ll probably not notice it, but yes, the LPDDR4 is more energy efficient and has a higher processing performance (it’s close to 50 % better). Probably the biggest improvement from the 850 EVO is the endurance which is now 300TB (before it was 150TB) or if you write 164GB a day for 5 years which I doubt will happen with possibly some exceptions at which point, why are you using the EVO series and haven’t yet upgraded to the PRO? The warranty stayed the same at 5 years, just like the 860 PRO and it’s a bit strange that Samsung cut back from the 10 years of the 850 PRO (no more constraints from competitors?) It’s worth noting that only the writing is the deciding factor in the longevity of an SSD, while the reading has zero effect.

Now, will the increased endurance have a significant impact on the user’s experience? Once again, probably not and the reason is because most people won’t really force the device to its maximum everyday, so there’s a high chance that they’ll change their PC several times until needing to replace the SSD. Some other worth mentioning features that are present on both the 850 and the 860 EVO are the Automatic Garbage Collection Algorithm which, as you may know, an SSD has multiple blocks of data made from pages and, considering that, at some point the SSD will need to remove old blocks to make space for new ones, the GC searches for what are called stale pages which are usually mixed with good pages, so it can move the latter to a new block of data, while deleting the entire stale block, meaning that the SDD should always have a fresh batch of fresh blocks available). 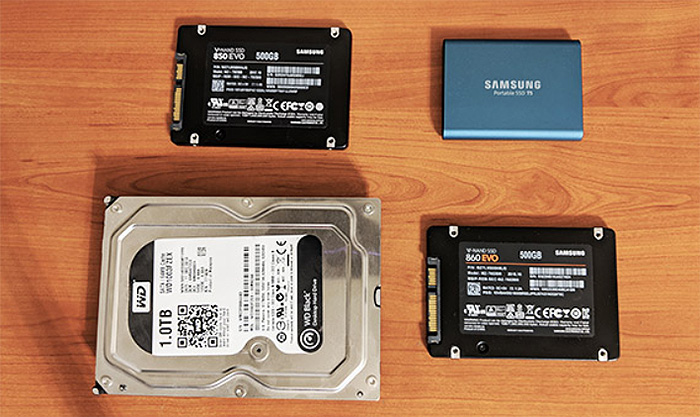 There’s also the Trim Support which is closely linked to the GC and it has the role of letting the OS know precisely which data block are no longer required, so these can be deleted and prepared for rewriting (this feature is needed because the OS can’t see the SSD blocks and the SSD isn’t able to see the OS file system – better explained here: https://arstechnica.com/gadgets/2015/04/ask-ars-my-ssd-does-garbage-collection-so-i-dont-need-trim-right/). Furthermore, both SSDs also support the S.M.A.R.T feature (checks the reliability of the SSD and predicts any potential failures) and in terms of security, both support AES 256-bit Encryption (Class 0) TCG/Opal IEEE1667.

In terms of performance, I did test both the Samsung 850 EVO and the 860 EVO (in standard mode and after enabling the Rapid mode) using three types of benchmarks: ATTO, CrystalDiskManager and AS SSD Benchmark.

The results don’t show a radical difference between the two SSDs and depending on the benchmark, either the 860 EVO or the 850 EVO would get a slight advantage. This clearly indicates that the user will not experience any difference between the two SSDs in most real life conditions. So, why should you upgrade to the 860 EVO? Well, at some point, you won’t really have a choice because Samsung discontinued the 850 EVO, so the 860 EVO will fully take its place. At the same time, the 860 EVO does come with some improvements (although nothing radical) and the price tag remains similar to its predecessor, so there is hardly any reason not to choose the newer model over the 850 EVO.