The GaN technology is arguably the best innovation that happened to the charger industry in the past decade, so devices such as the Alxum 100W GaN charger are inevitably replacing the traditional larger chargers.

And it’s not only about the size because the GaN technology has greatly improved the energy efficiency, allowing the developers to create chargers that can output more than 100W, with no risk of overheating. All that while keeping the case compact and supporting the connection of more than one device at the same time. Since most smartphones now come without a charger (Apple, the anti-consumer trend setter made sure everyone would follow) and considering that a lot of laptops can be charged up via a USB-C port, you do need to get a separate charger, either from the brand itself or third-party.

The Apple’s own 140W GaN charger is not a bad choice, but you would be limited to charging a single device at a time, while the Alxum 100W will offer four ports for multiple devices. Also, I have tested quite a few chargers over the years and the performance of third-parties is not that different from the likes of Apple, Samsung chargers or any other brand, in some case they even performed better and close to the ideal specs.

I still have the 67W Apple charger from a 13-inch MacBook Pro and the size difference between it and the Alxum 100W GaN charger is striking. The latter measures 2.36 x 2.36 x 1.02 inches (6.0 x 6.0 x 2.6 cm) and, considering the retractable plug, I suppose it could be considered pocket-sized – be aware that the non-US versions don’t have the plug retractable. The device is made of plastic and on the sides, the manufacturer decided to add a wavy pattern, in a way as to differentiate it a bit from the other competitors.

It does make sense since the difference between most other 100W GaN chargers is only in terms of color and logo. On the other side of the plug, the Alxum 100W charger has positioned the four ports and the LED which lights up white as soon as the device is connected to a power source (it stays on for a bit after the Alxum 100W is disconnected from the socket as well). You would be surprised how many chargers actually lack this basic power indicator (UGreen Nexode 140W is a good example). As for the ports, the first three are USB-C (from C1 to C3) and the first two, at the top can each output the maximum 100W – there’s support for PD3.0.

In case you connect devices to both ports, then the output for the C1 goes down to 65W, the second reaching up to 30W only. The 65W output limitation will apply to the USB-C2 as well as long as the C1 is not used. Connecting devices to all three USB-C ports will limit the C1 to 45W and the C2 to 30W. I am fairly sure that the C1 and C2 ports have the same controller, while the C3 and the USB-A share the second controller. That’s because if both are connected at the same time, the output gets limited to 7.5W each, with no impact if the C1 and C2 are in use.

I need to mention that the USB-C3 port is limited to only 20W (PD3.0) and the maximum output of the USB-A port is 18W, supporting QC3.0. To be able to maintain this maximum output per port, Alxum 100W adopted the same approach as most other GaN chargers, it senses which ports have cables connected to them so it partitions the output accordingly. I did mention that it sense cables and that’s because it doesn’t really check for actual connected devices. Which is why it’s best to remove any cables from the charger if it’s left unused.

Also, the Alxum 100W needs to constantly recalculate the power budget, so as soon as you connect or disconnect a cable, the power is cut off to all devices for a brief moment. So, you should not rely on the Alxum 100W GaN charger for continuous power delivery, only connect devices that have an inner battery. That being said, to test the charger, I used a 13-inch MacBook Pro which won’t require 100W, but it should still be above 50W and, after connecting the laptop to the USB-C1 port, a multimeter showed 57W, while the voltage was 19.80V and the amperage 2.86A.

The USB-A port has the following specifications: 5V/3A, 9V/2A and 12V/1.5A. Lastly, I decided to check the temperature management of the devices. I used the AGM Glory Pro (since I was too lazy to install the Topdon TC001) and the thermal camera showed a decent temperature, fairly uniformly distributed across the device. And this shows one of the main advantages of the GaN technology, the good thermal management, where very little heat is left unused, unlike the traditional chargers.

But I did notice that increasing the power output does limit the actual efficiency considering that the few 140W chargers that I tested were slightly hotter than let’s say, a 65W GaN charger. It’s worth mentioning that the Alxum 100W GaN charger has built-in protection against overcharging, short circuit over-heating and over-voltage. Furthermore, the manufacturer says that the GaN charger is ELT-approved, and has FCC & CE certification. 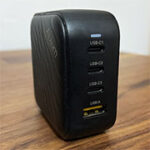