The BlitzWolf BW-FYE5 are a pair of true wireless earbuds released by the Chinese manufacturer which, similarly to the other devices from the BW-FYE series, aim mainly towards the entry-level segment, offering a decent sound quality and the complete freedom from wires that this type of earbuds can offer.

The wireless headphones and earbuds aren’t something new, but completely removing any wire (even between the earpieces) is a new development which was first pushed by Apple and later followed by the other manufacturers. No wires means all the hardware has to go into the earpieces themselves and, since the user will not accept any compromises in terms of comfort, BlitzWolf had to find the right shape, use the right tech and properly calibrate the sound for its true wireless earbuds series. 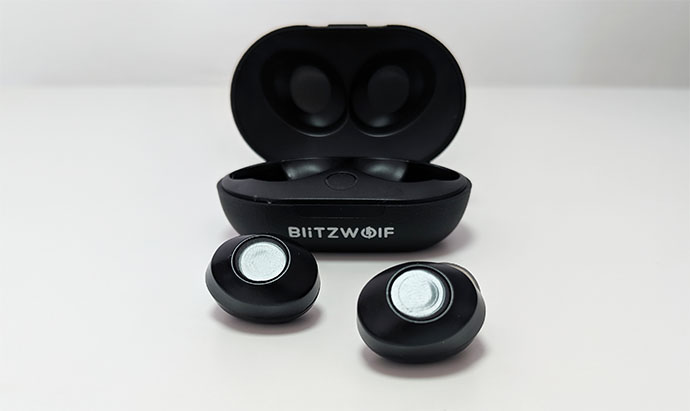 When I tested the BW-FYE1, I found them reasonably comfortable, while the BW-FYE3 weren’t really my cup of tea, but the BlitzWolf BW-FYE5 may actually be the most comfortable among the series and they do come with the smallest charging case. And this is an important factor because unlike the regular headphones which get their power from the host device, the true wireless earbuds are dependent on the charging case and a small portable one is going to be a welcoming bonus. Since the entry-level true wireless earbuds market is constantly flooded by lots of devices, let’s have a closer look at the BlitzWolf BW-FYE5 and see if it can differentiate itself from the rest.

Built Quality and Design
If you put all the BW-FYE earbuds one next to the other, you’ll notice that they don’t follow a specific design blueprint, but each adopts a different approach, perhaps experimenting to see which is the better implementation and the BlitzWolf BW-FYE5 does have some similar traits to the BW-FYE2 (some resemblance in the shape and the outer LED ring), but it can’t really be considered its successor since BlitzWolf is a bit weird with its earbuds releases – there is no real successor or predecessor (the close it could come to it is the improvements that the BW-FYE3 did over the BW-FYE4). 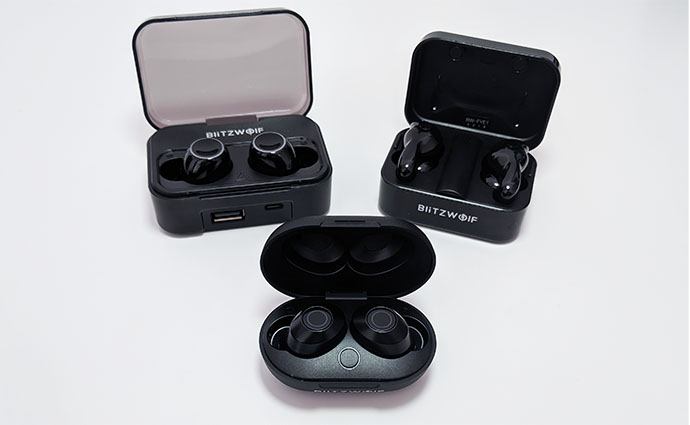 That being said, one of the main highlights of the BW-FYE5 is actually the charging case which is very small, measuring only 2.36 x 1.45 x 1.10 inches, so it can easily be carried around in your pocket. The case is oval and the plastic is textured, so it won’t slip out of your hand and it’s also covered by a black matte finish (which means that it won’t retain fingerprints).
It’s clear that it doesn’t have a very large built-in battery but, when compared to the BW-FYE1 charging box which was already decently compact (and it’s not a powerbank), it does win some points on the portability department. 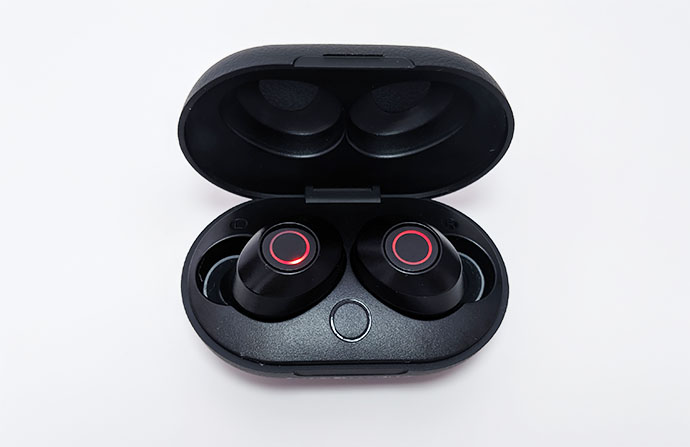 Inside the charging case, you’ll find the two BW-FYE5 earbuds which are attached magnetically (in the same manner as the BW-FYE1 and FYE3), but don’t forget to first remove the small stickers from the charging pins. Each earpiece is completely made of plastic covered by a matte finish (that can be black or blue) and at the end of each earbud, there’s a silicone cover. When put next to the BW-FYE3, the prolonged plastic towards the silicone tip on the BW-FYE5 is a lot shorter which allows a more natural placement within the ear – and indeed, I could easily position the earbuds in my ears and they did feel very comfortable to wear even for longer periods of time.

Furthermore, the LED will flash blue every 7 seconds while the earbuds are paired to your mobile device and, when the battery is low, the indicator will start flashing red. I know that a physical button can irritate the ear canal and a touch-sensitive area may have been better (such as on the BW-FYE3), but, the way the button is positioned should prevent pushing against the ear canal (at least to a certain extent). Are the BlitzWolf BW-FYE5 suitable for jogging or working out? I don’t recommend any earbuds that don’t have hook silicone tips when doing any type of sports simply because the true wireless earbuds can easily fall out of your ear. I do recommend using the FYE5 while walking outside or for long rides with the train or airplane since they’re surprisingly comfortable and won’t irritate the ear canal even after prolonged use (the only issue can only be the battery life). The earbuds are IPx6 rated (just like the BW-FYE3), so they’ll be fine if it’s raining outside and, even if you could technically wear them while showering, I would advise against it.

Connectivity and Sound Quality
The BlitzWolf BW-FYE5 is equipped with the Airoha AB1526P chipset, the same that the manufacturer used for most of its earbuds line and, considering that it is Bluetooth v5.0 certified, the BW-FYE5 should deliver a better coverage and a higher throughput than devices that use the previous Bluetooth generation (the throughput can go up to 2Mbps). 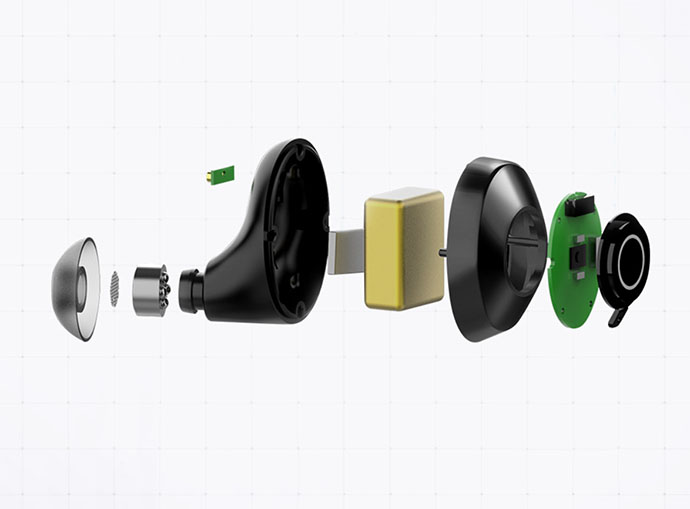 I couldn’t find any info about the type of drivers that the BW-FYE5 true wireless earbuds have implemented (most likely dynamic drivers), but, similarly to the other BW-FYE earbuds, the volume is not the highest (the xFyro S2 can get a lot higher), but, it should be enough for most cases (while I was on a plane, it could mask really well the engine sound). The pairing process is also similar to the BW-FYE1 and the BW-FYE3, requiring nothing more than to remove the earbuds from the case (they will automatically turn on) and, from your mobile device, to pair to the ‘BW-FYE5 R’. This way, your device will pair to the right earbud, which, in turn, will pair to the left earbud.

Using a Google Pixel 2 XL, the process was fast and the pairing was immediately successful (it will also work with Apple devices) – every time you put the earbuds back in the case, it will turn them off. In case you want to use a single earbud, you can take only one from the case and use it in mono mode, but, if you want to use one earbud for a device and the other earbud to pair it to another device, unfortunately, this mode is not supported by the BW-FYE5 – the moment both earbuds are out of the case, they’ll pair to each other. In terms of Bluetooth connectivity and coverage, the BlitzWolf BW-FYE5 did well, allowing up to 30 feet until the connection would become unstable. 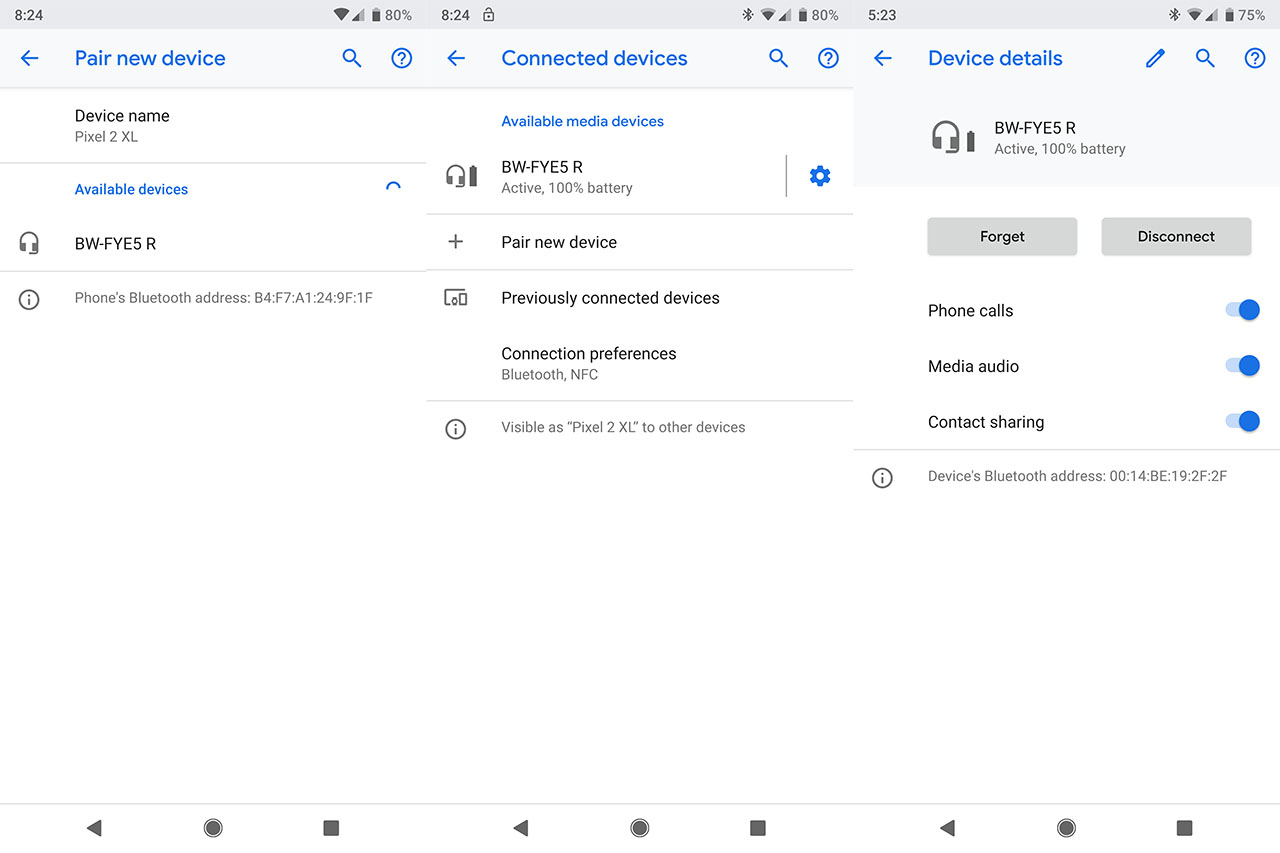 Furthermore, I noticed that unlike the BW-FYE1, I did not experience any disconnects between the right and the left earbuds, so, despite using the same chip and the the same Bluetooth technology, the BW-FYE5 is better optimized. The supported modes are HFP, HSP, A2DP and AVRCP, but I also noticed that the BW-FYE5 doesn’t support the AAC low-latency codec (which is not an open standard, therefore not free to implement), so it could have some issues with playing YouTube videos – for now, I didn’t see any noticeable lag (but you may, using an iPhone which doesn’t support most low latency codecs).

The BlitzWolf BW-FYE5 is calibrated differently than the other devices from the BW-FYE series, but, the sound quality is still as expected from entry-level earbuds, with decent bass levels (the bass is a bit boosted and it leaves the vocals reasonably clear), with good mids, but the highs do sound a bit distorted. Furthermore, the bass goes as low as 17Hz (20Hz is the lowest limit for the human ear, but you can still feel the vibration even at a lower frequency) and the treble goes up to 18KHz. As expected for this price range, there is no active noise cancellation, but, being in-ear devices, it will cover the background sound fairly well. The BW-FYE5 is equipped with a microphone, so you can use it for calls: the sound from the other side was good and I could hear the person reasonably clear (the quality was a bit muffled), but from my side, things weren’t that great and the person on the other side would often hear the sound a bit hollow and the background noise was amplified. 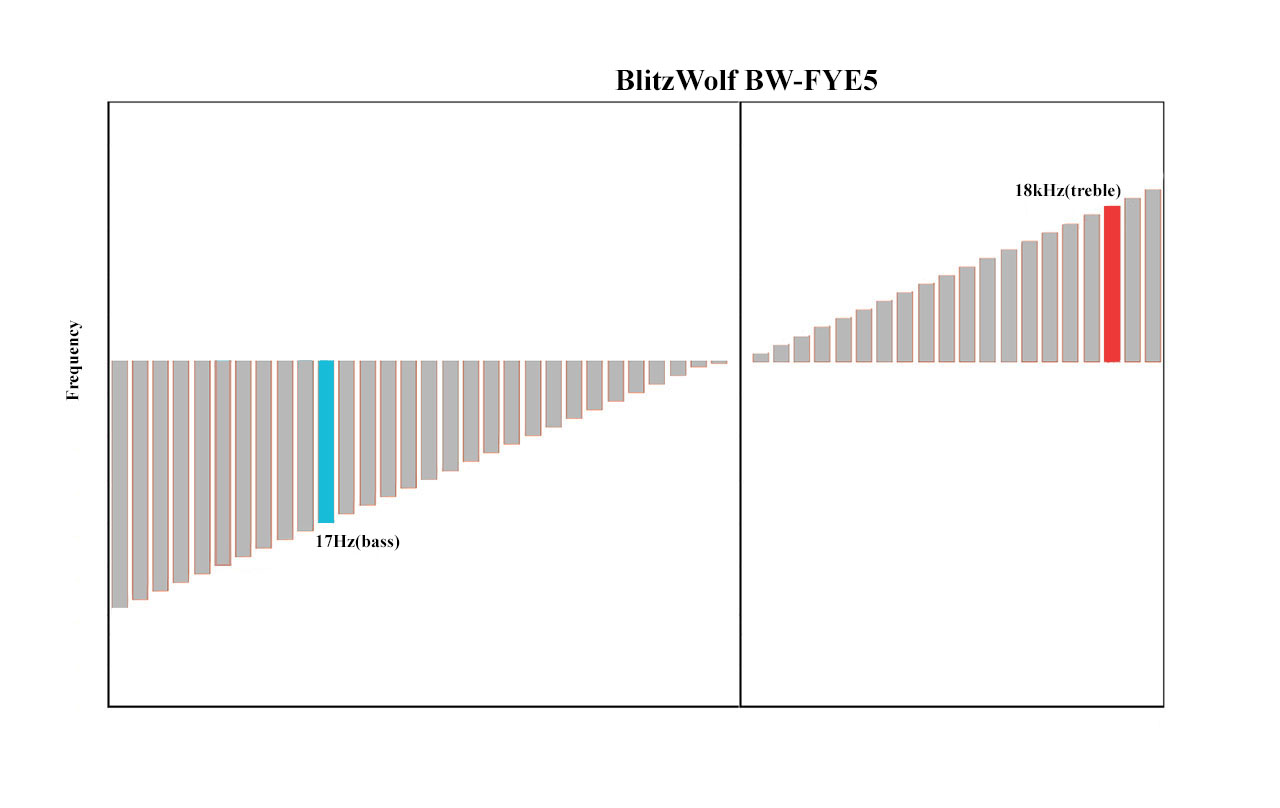 Each of the two earbuds comes equipped with a 50mAh battery which, as the manufacturer claims, should deliver about 2 hours of continuous use and, in my case, using 70% volume, the battery delivered up to 2 hours and 15 minutes. The charging case has a 400mAh built-in battery (the lowest of the entire series, but it was necessary in order to keep the case so small), so it should allow you to recharge the earbuds battery about four times (with a total ‘continuous’ use of no more than 8 hours) – also, fully charging the earbuds shouldn’t take more than 1 hour and a half, while the case will require about 2 hours to go from 0 to 100%.

Conclusion
Despite being a relatively new type of device, the true wireless earbuds market is already saturated, especially on the entry-level segment, so BlitzWolf had to deliver a solid product in order to outshine its competitors. While the BW-FYE5 doesn’t excel in the sound quality department (it’s decent considering the price tag, but nothing spectacular), what makes these earbuds special is the comfortable wear experience and the incredibly small case which makes it so easy to carry the earbuds around. Of course, a small case means a smaller battery, but, if portability and comfortability are what you’re looking for in a budget-friendly pair of earbuds, then you can’t go wrong with the BlitzWolf BW-FYE5. 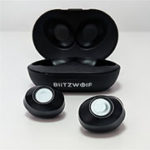