The TP-Link Archer AX73 is one of the newest WiFi 6 models (at the moment of writing) developed by the Chinese manufacturer and just like Asus and Netgear, there seems to be a race on who can flood the market with as many routers as possible.

Not that I complain about having to choose from a healthy amount of devices, but it quickly get confusing when you have multiple AX1800 models available from the same brand. The Archer AX73 seems to be in the same class with the RT-AX82U which has proven to be a fairly reliable router (a personal favorite), both sharing the same SoC and WiFi chips, but, while the hardware is extremely important, the software and user experience have at least an equal value. And there’s something that TP-Link has done that caught my eye and its about the decision to add the Home Shield package to the AX73, while keeping the HomeCare out. 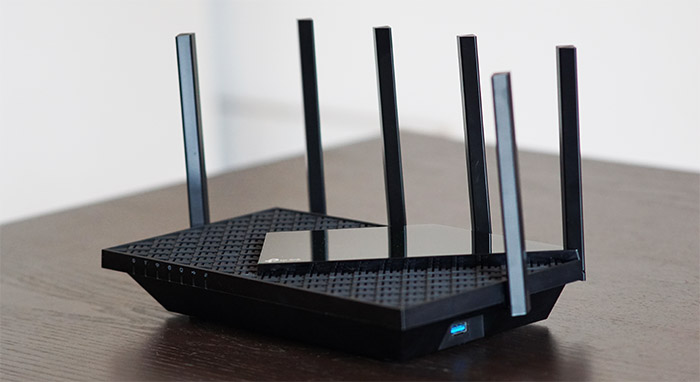 The HomeCare package was provided by TrendMicro and it included QoS, Parental Control and Antivirus, so, hopefully, TP-Link didn’t take the same road as Netgear and removed important features for the sake of re-adding them later with a subscription. In any case, the TP-Link AX73 does come with the expected WiFi 6 features, such as OFDMA, the 1024-QAM modulation and 160MHz channel bandwidth, so let’s put it to the test and see how well it fares when compared to its main competitors.

You very rarely get a TP-Link router with a plain look and the AX73 is one of those devices where the manufacturer said yes to every idea that came from the design team. And the end result is a bit peculiar, but still fairly interesting. That being said, the TP-Link AX73 features a rectangular plastic case covered by a black matte finish, with the exception of a large piece of plastic at the top that’s glossy black. This piece interrupts the unique pattern that covers almost the entire upper section of the router – the pattern resembles some sort of textile braiding and there are multiple cut-outs to let the air flow through.

The bottom part of the router is covered by the same type of pattern and these small, but numerous ventilation holes do help quite a bit with keeping the internal temperature in check. Yes, the router does get warm while functioning, but it did not show signs of overheating for now.

I noticed that on the bottom of the AX73, TP-Link has added four silicone feet to keep the router in place (still can’t fathom why they haven’t done the same with the AX50) and there are also a couple of holes to help you mount the device on the wall. If you want to keep the TP-Link AX73 on a desk, know that the router is not that compact (it measures 10.7 x 5.8 x 1.9 inches) and there are lots of antennas, surrounding the case. The AX73 does come with six antennas, four positioned on the rear side and two on the left and right side of the device and no, they’re not detachable (the trend of upgrading the antennas is essentially gone by this point).

TP-Link has positioned the seven LEDs on the front of the AX73 (on the upper edge) and, while they’re quite discreet, you do get the option to turn them off if the light bothers you during the night. From the left, there’s the Power LED (solid green when everything functions properly), followed by the 2.4GHz and the 5GHz LEDs (still have those strange WiFi icons). The next LED is responsible for showing the status of the Internet connection and, similarly to the Netgear RAX10, it will remain turned off if there’s no cable connected; the LED will turn amber if there’s a cable connected, but no link and will turn green when it has a proper Internet connection. Lastly, there’s a single LAN port for all four (borderline useless unless you add one LED per port), a USB LED and a WPS LED. 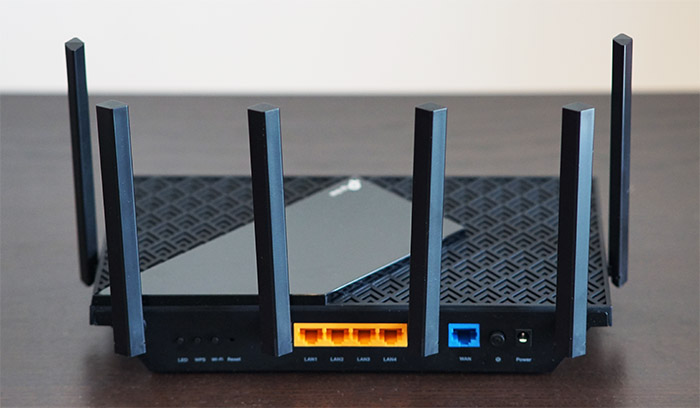 On the rear side of the TP-Link AX73, there are four buttons, one for turning Off/On the LEDs, one for enabling the WPS process, one for turning On/Off the WiFi and the last one is a recessed Reset button (press and hold it for about 10 seconds to return the router to its default settings). Further to the right, there are four LAN ports (all Gigabit), one WAN port (also Gigabit), a Power button and a Power connector. On the right side of the AX73, there’s a single USB 3.0 port for adding a printer or an external storage device.

I rarely had problems opening the case of any TP-Link routers, so the tear-down process of the TP-Link AX73 is not that difficult. Do be aware that even if there aren’t any sealed screws, you can still void the warranty by opening the device. If that’s fine with you, remove the four screws from underneath the four silicone feet and then gently detach the top cover. It’s not that easy to do it, so I suggest using a prying tool and start from the front side of the case and then slowly move towards the rear until the top pops off. 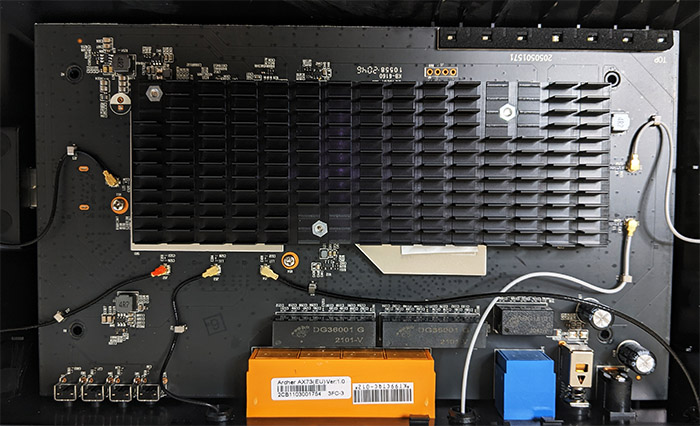 You will then be greeted by a fairly large PCB (there is no wasted internal space, so the dimensions of the router are justified) and you will see a black heat sink covering up the main components. To remove it, you need to turn the PCB upside down and the process of removing the board is stupidly difficult. You can easily damage it, so take your time, slowly and gently trying to push the ports and buttons until the PCB gets removed.
Afterwards, you need to remove the two screws from the top part to detach the bottom-placed metallic sink which apparently has some thermal paste to transfer the heat (you will need to reapply it afterwards). This way, you should be able to easily remove the three screws and finally detach the top heatsink. This way, I was able to identify the tri-core 1.5GHz Broadcom BCM6750KFEBG SoC which is the same as on the Asus RT-AX82U, 128MB of flash memory from ESMT (F50L1G41LB), 512MB of RAM from ESMT M15T4G16256A, 2x DG36001 G 2101-V LAN transformers and one DG18101 G 2042-Y LAN transformer.

Just like the AX50, the TP-Link AX73 is a WiFi 6 router from the draft stage, but, there is a fundamental difference between it and the RAX40 and that’s the support for OneMesh which, similarly to the AiMesh, it can create a mesh network using multiple types of TP-Link routers. The concept is the same as with the dedicated WiFi mesh systems – all the routers becomes mesh nodes with one being connected to the modem and the rest communicating between each other, creating optimized paths for the data.

If one node fails, the data will be routed using the remaining connected routers. The Asus AiMesh is far more vast than the OneMesh in terms of model compatibility, but it’s still a step in the right direction. Besides the mesh capabilities, the TP-Link Archer AX73 does come with the highlighted feature from the WiFi 6 standard: the OFDMA. This feature splits the channel bandwidth into multiple resource units that can vary in size and these RUs are then allocated for communicating with multiple client devices at the same time. Doing so, you get a better handling of smaller data packets and far less interference.
MU-MIMO is also supported, and it should help handling multiple devices at the same time, without needing to rely on the round-robin technique, but the compatibility is still an issue even today. 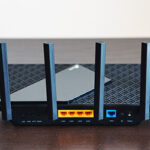