The Depstech WF060 is an affordable 5.0-megapixel WiFi endoscope inspection camera (also known as a borescope) which can be of great help when you’re trying to locate a cable in the wall, to see if there’s a leak from a pipe underneath the bathtub or any other application that requires access through a narrow space.

When I say affordable I mean it considering that an industrial borescope can easily go past a couple of hundred dollars, but it’s sensible not to expect the same level of quality, since some corners needed to be cut to keep the price accessible. But, surprisingly, not that many since you do get the footage through WiFi (to your mobile device), the supported resolution can go up to 2592 x 1944 pixels, there is a front-facing torch (with adjustable brightness levels) and the cord is quite long (16.4ft) and it’s semi-flexible, but, perhaps one of its significant weaknesses could be considered the fixed focal length.

That is, if you compare it to the more expensive models out there, but at its price point, it can outperform its competitors due to the 15.7 inch maximum focal length. So, can it actually be used as a tool in a construction environment or is it more of a domestic gadget? I doubt it’s truly build for a challenging environment, but Depstech says that the device is IP67, therefore both water and dust resistant, so let’s have a closer look and see how it fares.

Design and Build Quality
If we take devices such as those from Vividia, we see that the endoscope camera usually consists of a portable monitor at one end and a flexible cord with an inspection camera at one end and that’s pretty much the concept with the Depstech WF060 but, instead of a display monitor, there is a just the handle with lots of buttons. Inside this handle, there is a WiFi chip and antenna to send the footage towards your WiFi-enabled devices (smartphone or tablet), so, the manufacturer didn’t have to design its own display and worry about image quality. 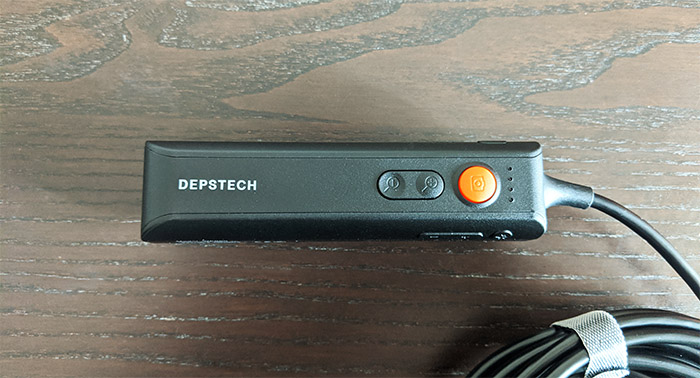 Instead, it’s up to you to get a higher-res display if you want the best possible video quality – a few older devices may experience some latency issues, but that’s not really Desptech’s fault. The handle is made out of plastic covered by a black matte finish and, at its 4.56 x 1.18 x 1.3 inches (11.6 x 3.0 x 3.3 cm), it’s quite easy to move around, but since it’s not that heavy (it weighs 3.52 ounces – 100 grams), it doesn’t have that premium feel. In order to turn on the device and adjust the functions of the camera, you will have to rely on the controls from the handle and I know that the first element to catch your eye is going to be that large orange camera button, but to start the Depstech WF060, you need to search for a smaller button on the right side which you will need to hold and press until you see that the LEDs next to the orange button turn on.

These four LEDs will show you how much battery life the endoscope has left and if one of them turns off, it will indicate that it lost 25% of battery – the LED will be blue when it’s above 25% and white when it’s below 25%. When the battery is depleted, you can recharge it using the included cable – there is a microUSB port on one extremity of the handle. Depstech has included a 3350mAh non-removable battery which should be able to handle about 4 hours of continuous footage. This is achievable only because it doesn’t have a built-in display and I got past three hours most of the time even at a higher resolution but know that the torch does like to quickly eat up the battery life. 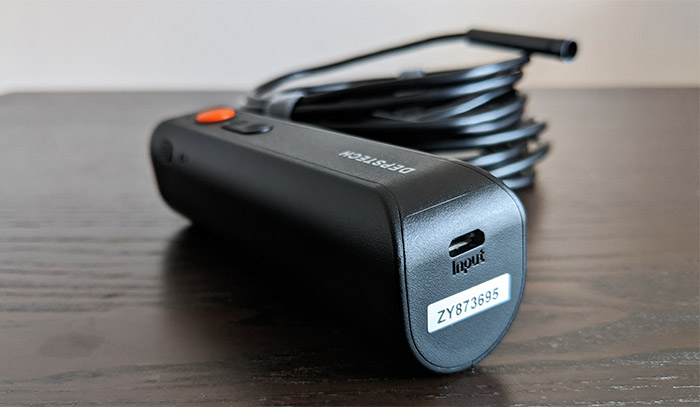 Next to the camera button, there is a zoom switch that you can press to either zoom in or out of the live image and on the left side of the handle, there is a small torch button which will turn on or off the torch on the handle, while next to it there is a plus/minus switch that increases or decreases the brightness level of the camera torch (the one at the end of the cable). The Desptech WF060 has a 16.5-foot long cable that is permanently attached to the handle and I am not entirely convinced about the quality of the plastic cover (that acts as a sort of buffer between the cord and the handle) since it does creak when adjusting the cable.

The cable itself is semi-rigid and you do have to pre-bend it a bit to make sure that it can easily fit through a wider space, but it does get a bit difficult to maneuver after about 10 feet, so, if you need to keep the cable straight, you could attach the camera end to a thin pole – if the space is very narrow, you will have no problem inserting the cable by itself (it’s worth mentioning that there are two hook and loop fasteners along the cable to help manage its length).

At the end of the cable, Depstech has embedded a small 5.0-megapixel HD 1944P camera lens with a CMOS sensor and a diameter of 0.31 in (0.8 cm), so it should be able to fit in very tight spaces. Desptech says that the camera is IP67-rated, so it should survive both dust and water ingress, so I wouldn’t worry too much inserting the borescope inside a pipe – be aware that only the cable and the camera are water sealed, the handle is not. I noticed that the manufacturer has included some additional heads, from which one has a magnet (strong enough to lift up a key), a 45-degree mirror (to see in hard to access places) and a hook (to pick up heavier objects). In order to add these accessories, you need to first remove the existing lens head (simply unscrew it) and then screw the preferred head in its place. 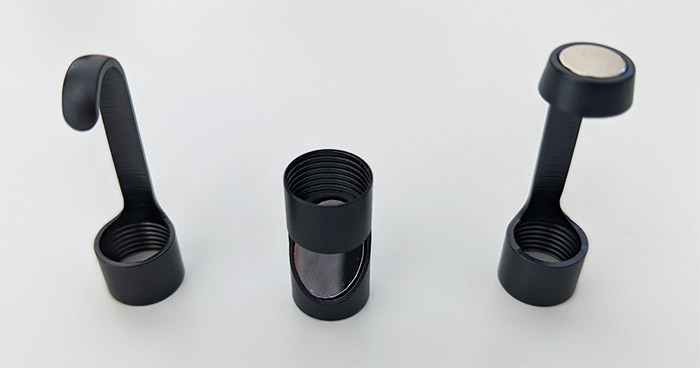 Installation, App and Video Quality
The installation process is ridiculously simple and all you have to do is download the app on your mobile device (iOS or Android), power on the Depstech WF060 and then check for the broadcasted SSID: it should be something like Jetion_fxxx and enter the password 12345678 (make sure to also disable the Mobile Data, otherwise it won’t connect). And that’s it, open the app and the video should be streaming immediately.

Of course, the app will allow you to do some modifications by going to Settings (the cogwheel from the right side), where you should be able to change the SSID and the password – for security reasons, this is the first thing that you should do: just enter the new SSID (or password) and press Modify WiFi name (or password). You can also Reboot the device, clear the password, change the button alignment or modify the resolution: I could select between 1280×720, 1920×1080 and 2592×1944 (the refresh rate is set at 30Hz). 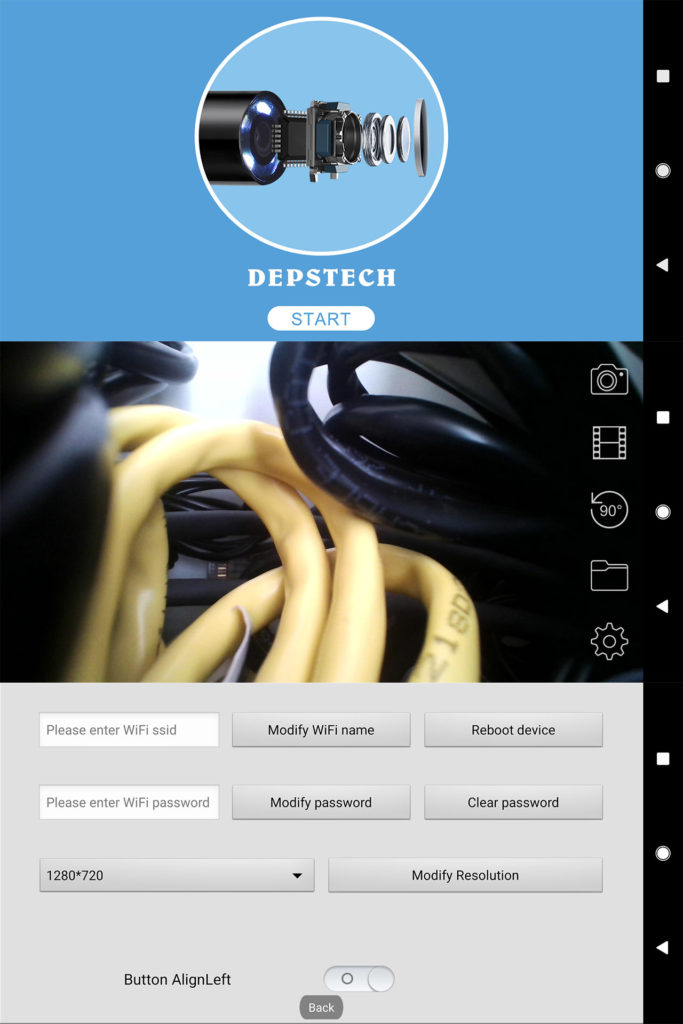 From within the app, you can also quickly capture a photo, shoot a video, flip the screen 90 degrees or visit the Album (where the photos and videos are stored). As I said in the introduction, the camera is fix-focused, so, you will have to move it around a bit to find the sweet spot unless you want to settle with a mildly blurry close-up shot. And it’s really not a problem since it’s a matter of inches, so, as you will see from my shots, it’s quite easy to clearly distinguish what you’re looking at (I put it inside an air purifier and it was decently clear).

It’s true that there are some endoscopes with adjustable focus, but they’re also significantly more expensive and truth be told, unless you’re trying to focus on a specific tiny detail in a larger space, you’re really not going to need this feature. Like I said, the Depstech WF606 does a great job at pretty much any resolution you may choose and that’s thanks to what the manufacturer calls CamTele and the BluArt technologies.
What I could find about the proprietary CamTele technology is that it increases the focal length from 1 inch to 15.7 inches, trying to ensure that the details remain clear, while the BluArt tech refers to the 6-LED torch which apparently does a decent job at reducing the inevitable overexposure due to the light shining immediately next to the lens.

To put these claims to the test, I decided to connect the Depstech WF060 to a Google Pixel 2 XL and insert the camera inside some tubes, all that while cycling through the various available resolutions. By default, it’s going to be set at 1280×720 and you will have to manually adjust it to the higher resolutions, but, as can be seen from the photos, there isn’t a very drastic quality decrease even at the lower res. The WiFi connection is fine as I saw little to no latency and the details were clear enough, but the light does make the colors look washed out.

With the torch turned off, the image quality does go up, but again, the color accuracy is not what Depstech is aiming at and instead, it’s to help you see in inaccessible places and it does its job really well. I did notice that both the handle and the camera part got gradually warmer while functioning, so you may have to take some breaks after prolonged use and, if you decide to use the 45% mirror accessory, make sure to remove the blue cover and to keep it perfectly clean, otherwise, you will see only the smudges when the torch is enabled.

Conclusion
The Depstech WF060 WiFi endoscope camera is the type of device that even if you’re not using it that often, it’s going to show its value when you need it the most: to see where the pipes or cables are going, whether there’s a leak or any other similar applications and the accessories can help you retrieve valuable items (such as jewelry dropped down the drain). The image quality is good, not that far from professional grade endoscopes, but there is no adjustable focus, which was to be expected at this price point. Furthermore, you need to be careful while maneuvering the device since the handle is very lightweight and will hit the floor several times while pushing the cable through a hole. Other than that, I found that the WiFi connection is solid, the app works well and the handle controls are intuitive, so, while it may not survive for long in an industrial environment, it will work just fine if you want a helping hand while renovating your home and for any other casual use. 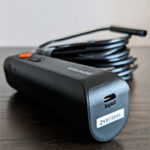