The Kensington SD2500T is one of the first Thunderbolt 3 and USB-C hybrid docking stations on the market to support 8K video pass-through at 30Hz (by relying on DisplayPort 1.4) and this seems to be a growing trend since I noticed that a few other brands have also released their own solution (while some are still in development). It’s true that the ultra-portable laptops have lost most of their ports, which makes the use of a docking station mandatory and it’s not only Apple with its two-port Thunderbolt 3 MacBooks Pro, there’s also Dell with its XPS line or the Surface Pro from Microsoft, but why 8K?

There aren’t that many 8K monitors available yet (Dell or LG offer a few, while Apple goes up to 5K), but the professionals will always need better gear, so, despite being small, it’s a growing niche nonetheless.
Even so, the device will work perfectly fine with two 4K monitors at 60Hz, which has been the standard with the other (more premium) Kensington docking stations for the last few generations and there’s also the Thunderbolt 3 port that can charge a 13-inch laptop, so you don’t have to carry the power brick with you, just the slim laptop (you do get a healthy amount of USB ports for your peripherals as well). 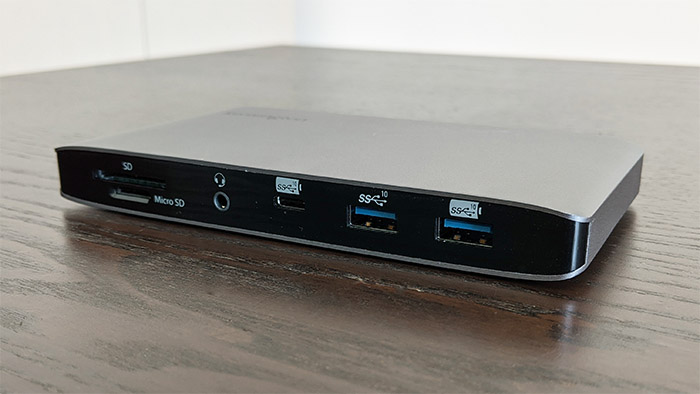 I have to mention that the SD2500T is not the only docking station from Kensington that supports 8K pass-through, since the manufacturer has also made available the fairly better equipped SD5600T, but the advantage that the SD2500T has is that it’s a lot more compact, while keeping pretty much all the important ports and connections. Well, you do get 60W instead of the 100 watt power supply delivered by the SD5600T, but that’s a necessary compromise if you want to be able to carry the docking station with you – the SD2500T is no larger than a smartphone, so it can easily fit in a pocket. That’s right, Kensington has made sure that the SD5200T is as compact as possible and, at 5.9 x 3.1 x 0.6 inches (15.0 x 7.9 x 1.7 cm), it’s definitely not going to take much space from your desk and it will be easy to carry.

I did put it next to the SD5500T, another fairly compact docking station from Kensington and, while the SD2500T is clearly smaller, I was surprised to see that it is, in fact, heavier. This is far from being a bad thing (no, it doesn’t weigh like a brick) since it will give it a premium look and indeed, the case has kept that compact, but elegant look that we got accustomed from Kensington. You get a thick metallic shell that goes around the top, bottom and the sides, but it as left the front and bottom for the black glossy plastic where the manufacturer has positioned all the ports and slots. There is no brushed aluminum this time and instead, Kensington has preferred the soft metal finish, but you do get the usual silicone bands that keep the device from budging, as well as an info label. I did notice that there is no VESA mount this time and I am a bit surprised by this decision considering that pretty much all other Kensington docking stations has at least a couple of VESA holes. Truth be told, there really aren’t that many places where you could have mounted the docking station, unless you purchased a dedicated stand.

That being said, let’s have a look at the ports. On the rear side (based on the Kensington logo from the top), there is a power port which is proprietary and, unexpectedly different than on the other Kensington docking stations, but I did like that the manufacturer has put some thought when it designed the brick considering that it’s covered by a brushed pattern (I won’t judge anyone that simply offers a black plastic brick since it’s most likely going to end up on the floor). Next to the DC connector, there is the Thunderbolt 3 port to which you will need to connect your laptop, so it both send/receives data and it gets its battery recharged – you get a 2.6 feet cable included (Intel Certified Thunderbolt 3). I used a MacBook Pro 13, so the 60W were enough for anything I would have wanted to run using the macOS, but things can get a bit trickier while gaming.

If you have a laptop that supports heavier games (Windows OS, mainly), you may need to take some breaks from time to time to allow for the battery to recharge. The 60W should also suffice for the larger-screen MacBooks, but it may not be enough if you’re running some heavy applications (in which case, give the SD5600T or the ‘older’ SD5500T a chance). It’s worth mentioning that the T3 port will also work with non-Thunderbolt 3 laptops, since it will simply revert to a basic USB-C connector (the controller seems to be a part of the Titan Ridge family). Be aware that some older MacBooks are not equipped with T3 ports and no, the SD2500T is not compatible with the previous standards (FireWire).

Next to the Thunderbolt 3 port, there are two DisplayPorts 1.4 and, as I previously said, you can connect two 4K monitors at the same time (both will be capped at 60Hz) or, if you have the gear, you can go for that single 8K output. In case you can’t connect to a T3 computer, you still get to use two 4K monitors, but they will be limited at 30Hz. I am still stuck with that 2K monitor fro Dell (U24515), so I can’t really test the true potential of the SD2500T, but, while attached to a MacBook Pro, the image was perfect and I saw no connection issues. Further to the right, there is a Gigabit Ethernet port along with two LEDs to show the data transmission and the supported speed (this is the only LEDs that I could find on the SD2500T, so no, there is no power LED). Of course, I immediately decided to test the supported throughput and to do it properly, I connected the docking station to a MacBook Pro (via T3) and the SD5200T to my router – it will work as client – I also connected another computer to the router and it will function as the server.

This way, from the client to the server, I saw an average of 940Mbps and, from the server to the client things didn’t go as smooth, since the average throughput was at about 687Mbps. 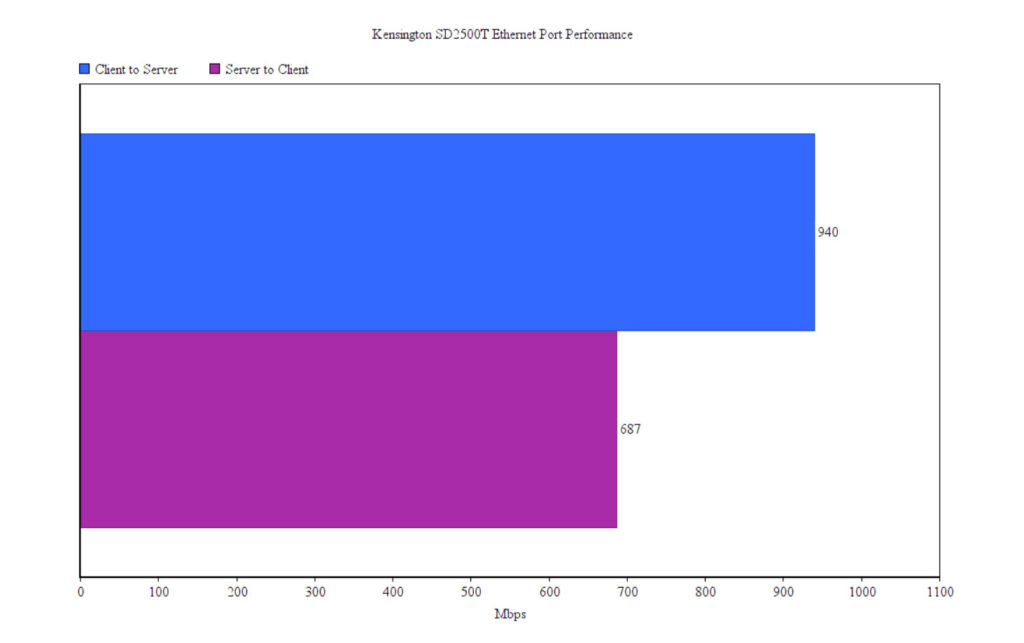 As a comparison, the SD5500T offered a sustained 943Mbps, so I assume there may be some limitation due to the compactness of the case or due to the internal heat (?). Speaking of which, the case did get warm to touch, but didn’t get hot, so I doubt there was any reason for throttling. The last port on the rear side is the USB-A port that, along with the couple of USB-A ports from the front side, will do great for connecting your peripherals. But it’s important to know that all three are USB 3.2 Gen 2 port supporting up to 10Gbps, so they should also be reliable for connecting external storage devices. Besides the USB-A ports, there is also a USB-C 3.2 Gen 2 port that I used to test the storage performance of the docking station.

To do so, I connected a SanDisk Extreme Pro external SSD (256GB) and, while the SD2500T was attached to a USB-C-only laptop (Lenovo Legion Y520), I ran the CrystalDiskMark 6 and the ATTO benchmarks. When compared to the direct connection to the laptop, the CrystalDiskMark 6 shows that there is a slight speed decrease, but it’s nothing dramatic (less than 5 percent which is negligible); the ATTO benchmark showed a better performance and there was barely any difference between the direct connection and the SSD going through the docking station. Afterwards, I kept the SanDisk SSD connected to the SD2500T, but I connected the docking station to a MacBook Pro (to one of the two Thunderbolt 3 ports).

This way, while running the BlackMagicDesign benchmark, I saw that the Read speed was 502MBps which is very close to the 514MBps that I got when the SSD was directly connected to the laptop, but the Write speed did suffer quite a bit, going down to 296.8MBps (from the 468.4MBps via the direct connection). Just like most recent Kensington docking stations, you also get an audio output port which worked really well with my pair of headphones – no interference or noise and lastly, you do get an SD and a microSD card slot. These slots support SD 4.0, UHS-II and they’re a great addition for photographers and vloggers considering that Apple didn’t bother including them into their MacBook series.

Similarly to the SD5500T, the Kensington SD2500T was designed to cater to both the Thunderbolt 3 ultrabook users and for those that have laptops with only USB-C ports available, and make no mistake, you do need a docking station in case you decide to go for those slim, easily-portable computers. It’s true that the SD2500T is not the most inexpensive device, but you do get support for dual 4K monitors (or 8K single monitor), you can charge your laptop, connect all your peripherals, your headphones and even your SD cards, and all that in a very compact case (considering the amount and variety of ports that you get) that looks just as premium as your expensive laptop. 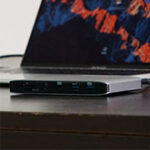