The advances that were made in the connectivity department has allowed the surveillance cameras to offer a far better image quality than before (mostly due to the higher bitrate at a lower latency) and the Annke 500 camera series aims to take full advantage of the Super HD resolution (at up to 8Mbps bitrate) to deliver an excellent video quality.

It’s true that indoors, you may tend to be less critical about the footage, but outdoors, everything needs to be crystal clear in order to easily identify a plate number or the face of a trespasser. And the Annke C500 promises to be up to the task with its 5-megapixel sensor and the long reaching Night Vision, but I’m not really convinced by the 2pcs IR lights (we’ll see how it performs in the testing section).
Furthermore, one characteristic that has been kept from previous models (and series) is the ONVIF compatibility which means that it supports integration with third party software, including Synology or QNAP NAS devices, Blue Iris, iSPY, etc (and this type of open ecosystem is rarely found with the popular brand nowadays).

It’s worth noting that both the internal hardware and the features are shared among all three models from the C500 series – it’s only the shape that’s different, so you get to choose the one suitable for your needs. The model that I got is the turret Annke C500 (there’s also a bullet and a dome-shaped C500 available), so let’s have a closer look at it as see whether this outdoor camera is a good option compared to its main competitors.

If I put the Annke C500 next to the Reolink RLC-520, there isn’t a huge difference between them in terms of design, both being turret outdoor-suitable cameras which shows that it’s a suitable design blueprint for any manufacturer that wants to create a reliable device that will be properly protected from bad weather. And yes, I did call this type of camera shape dome, but apparently the (more) correct term is turret, so we’ll stick with that. The C500 (I51DF) will most likely end up mounted upside down (on the porch ceiling or any similar surface) which means that it will be better protected from rain or snow than the bullet-type camera. But the sun flare is not going to be that forgiving due to the lack of a hood (not really possible on this type of camera), so choose the location wisely. Similarly to the RLC-520, the base is made of a lightweight plastic with the mounting bracket already attached to it out of the box and to remove it, it takes a bit more than just rotating the bracket counter-clockwise.

Well, a lot more since Annke wanted to put in place a type of anti-tampering system so you will have to rotate the stand until the plastic mark aligns with the narrow opening where you need to insert either a screwdriver or a coin to detach that part of the bracket – do this for the other three sections and you should have the camera detached from the mounting bracket. Sure, it’s not very intuitive, but I suppose that’s the point of the system since it discourage people from trying to remove the camera. Within the plastic enclosure, there’s the camera body which is made out of a metallic alloy (most likely zinc) and, as expected, there is no automatic positioning, so you will have to adjust the (pan/tilt) angle by hand. The device itself is quite compact and, since it measures approximately 4.3 x 3.7 inches, it won’t really attract that much attention. Furthermore, Annke had to make sure that the C500 will survive the outdoor conditions, which means that the I51DF is IP67-rated, so it is dust-sealed and will survive powerful jets of water.

And because of the way it is built, you’re not really going to put it in the open, on a pole, so it will be protected against hail storms and lightning. The Annke C500 should also remain operational when the temperature goes down to -22 degrees F or up to 140 degrees F, which makes it suitable for those harsher winters in the northern US or even Canada. Returning to the front of the camera, we can see a fairly large circular black glossy section that surrounds the 5MP lens (the rest of the body is matte white) and I did check for the brightness sensor, but it seems that the camera relies on the lens to ‘see’ when the light level gets lower and trigger the night vision. 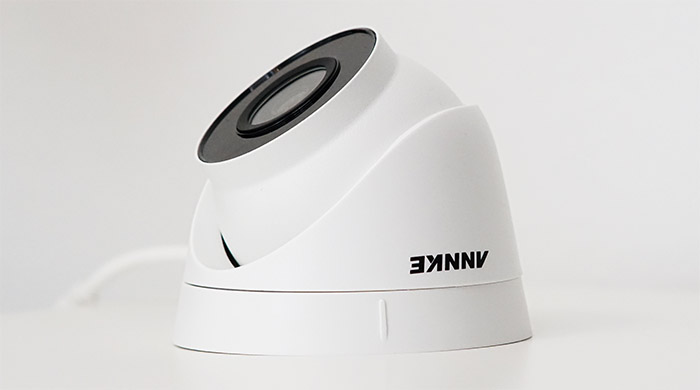 Speaking of which, this series only has two IR LEDs, so it will work better with close subjects – I’m not entirely sure why they didn’t add more LEDs or simply go for a floodlight. The motion sensor also seems to be built into the camera, so there is no obvious bulge (as you would see on the Argus 3 Pro) and unfortunately, there is no microphone or speaker either.

It’s not really a deal breaker since this type of camera rarely supports two-way communication, but it’s still a nice feature to have. I also checked around the body of the camera to see whether there’s a hidden microSD card slot but no, the Annke C500 does not support microSD cards of any kind, so you will have to rely on an NVR or hook it up to a NAS (or Blue Iris) – I also could not find a Reset button. You do get a grounding screw and the cable bifurcates at the end to allow the connection of a power adapter along with an Ethernet port (to the router) or the use of a single Ethernet cable for a PoE connection. Lastly, while functioning, the camera did get warm, but it never got hot to the touch.

Note 1: I have opened the case of the Annke C500 turret camera and I saw that everything is neatly packed, with one small board near the rear which is attached to a metal plate with a few screws and a thermal pad which, when removed, will reveal the second PCB where I could identify the HK-2019-7 CPATF2011 2012 09 processor. 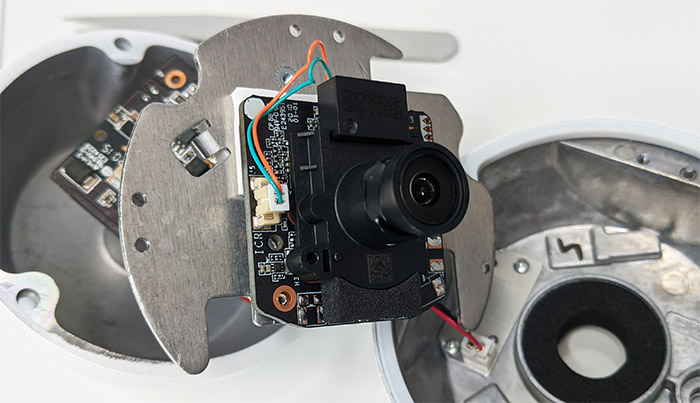 Note 2: Inside the package, you will get the camera itself (with the User Manual), some mounting screws, a separate waterproof lid (if you want to cramp your own cable), a 23 feet long cable with a waterproof lid already attached and a power adapter.

The Annke C500 turret camera does not support a WiFi connection, so the Ethernet cable is the only way it will communicate with the router which means that you will have to carefully plan how your camera will receive power. For simplicity sake, I would suggest either an inexpensive PoE Ethernet switch (I used a long-range TRENDnet TPE-LG80) or a PoE adapter (802.3af) and then feed the provided cable through a hole in the ceiling or just route it over the wall – there is a small canal on the bottom of the camera to help keep thing clean. Afterwards, I decided to download the dedicated app called Annke Vision which is compatible with Android and iOS, but I had some trouble finding it on the Play Store, so I simply downloaded the apk from the official website. After I installed the app, I had to allow access to the photos, media and the files on my device, select the region I currently live and then register a new account (or log into an existing account, if you have added other Annke camera before). 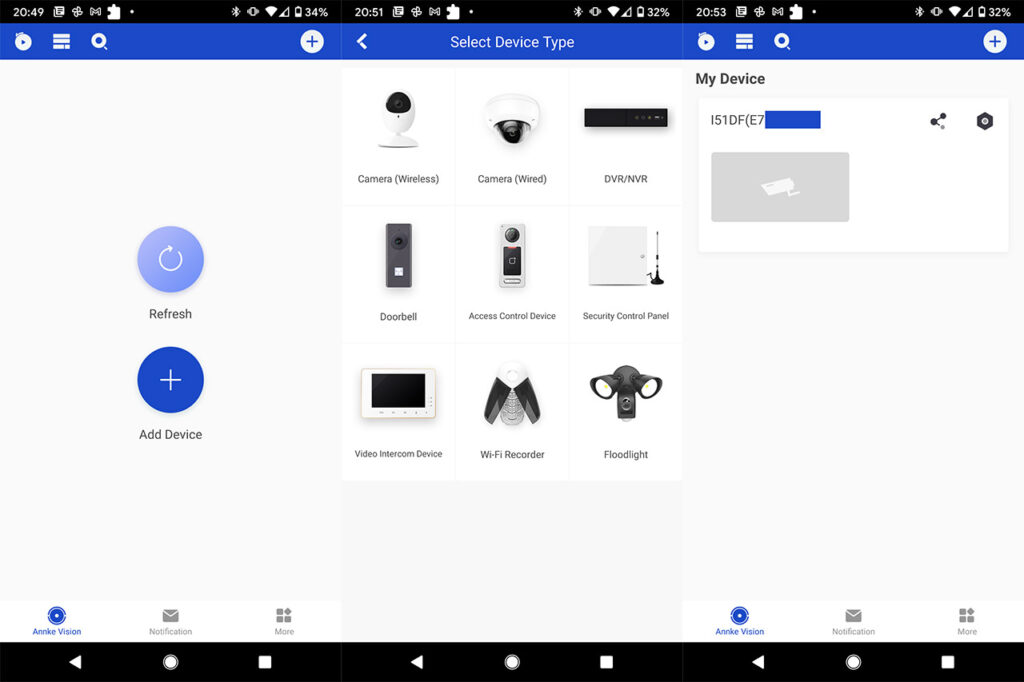 You don’t have to enter a phone number since the registration can be done via email and after that’s done, you can start adding devices. After you tap on the ‘Add Device’ icon, you get the option to either scan the QR code or enter the Serial Number. Since there was no QR code, I use the latter method and, after selecting the Device Type from the list, I had to enter a personalized Device Password to activate the camera. I also enabled the Annke Vision Service and waited until I got the ‘Adding Completed’ message. 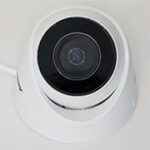