Whether we like or not, the dongles and the docking stations are here to stay, so, if you prefer to quickly swap your ultra-portable laptop between your home and your work office, then a reliable docking station will significantly simplify your workflow. At the moment, the ultrabooks predominantly make use of two types of transmission protocols, the Thunderbolt 3 and the USB 3.1 Gen 2, but, since both share the same type-C port connector, it’s easy to think that a Thunderbolt 3 docking station will connect to a USB 3.1 port and viceversa, which, as anticipated, is not the case for the most part.

Over the last year, I had the opportunity to test the Kensington SD5200T and the SD5300T which were a couple of great, almost flawless Thunderbolt 3 docking stations, but you couldn’t use them outside the T3 environment. This could have been an inconvenience if you had other computers without T3 ports, so, to cover the entire spectrum of laptops, Kensington recently released the SD5500T, a Thunderbolt 3 and USB-C hybrid docking station which not only makes it easier to go through various laptops while keeping the same accessories, but similarly to the SD5200T and the SD5300T, you also get support for dual 4K monitors at 60Hz, the ability to connect to the Internet via wire (the MacBooks lack an Ethernet port), 60W power delivery (which should be enough for a 13-inch ultrabook), audio output and a multitude of USB ports to connect a large variety of devices. 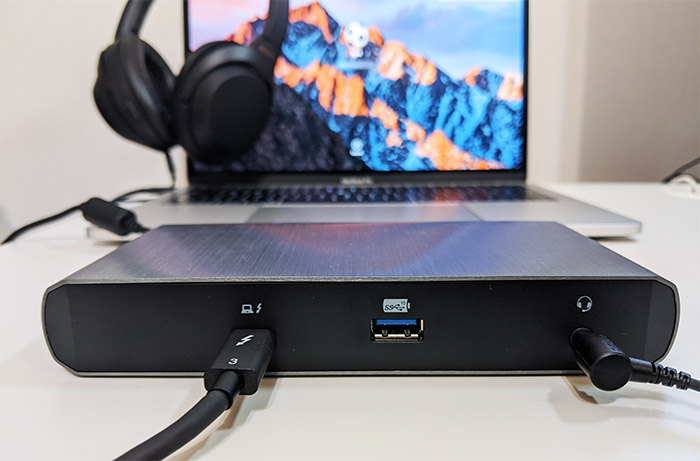 I won’t judge you if you’re at least a little bit against additional devices next to your laptop, especially when they are mandatory to gain some of the features that were the norm not long ago (and still are with other type of laptops), but the MacBooks and the ultrabooks had to give up on some ports in order to become thinner, lighter and to gain more space for a larger battery (of course, Apple wanted to remove all the ports if it could).

As a consequence, we got the device that had managed to kill the tablet and to make it a proper workstation again, you do need to rely on a device such as the Kensington hybrid docking station. That being said, the SD5500T shares some design elements with the SD5300T and specifically, the brushed aluminum outer shell, which significantly improves the look of the device, ensuring that it will not look out of place next to an elegant ultrabook and I was also pleasantly surprised to see that the new docking station is a lot smaller than its Thunderbolt 3 predecessors, measuring 6.6 x 3.1 x 1.0 inches (LxWxH). 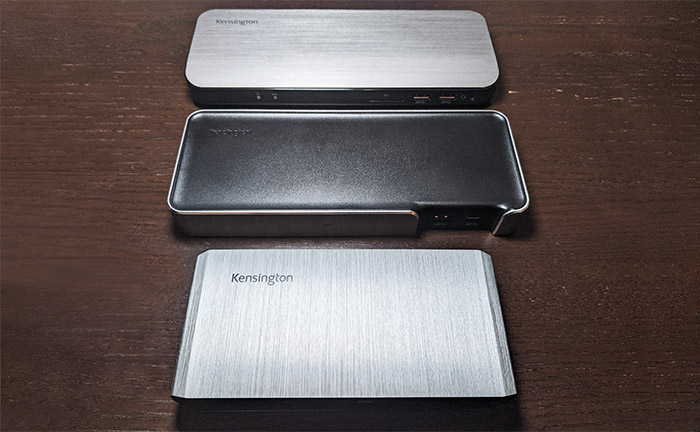 This addresses any portability issue, since it should be very easy to carry around – but, we can’t forget about the power brick which is huge and more powerful than the power brick used by my Lenovo Y520. At the same time, the huge power brick will be able to deliver enough power to easily keep a 13-inch MacBook Pro functional even when heavily used. You can also try it with a larger 15-inch ultrabook, but, considering that this type of device requires about 85W when on full-load, the SD5500T will handle it on moderate use and will easily recharge it if you don’t run heavy applications (such as rendering) – Kensington does also have the SD5200T available which offers a higher power delivery (85W).

The metallic shell completely surrounds the device, leaving only a couple of Kensington Security Slots (from which, one is Nano), but on the sides, the docking station uses a hard plastic (covered by a black matte finish) to house all the available ports. On the front side (I used the Kensington logo from the top as reference), there is a single Thunderbolt 3 port that you will have to use to connect to your MacBook or ultrabook, but, considering that it can also fall back to the ‘basic’ USB-C connection at 10Gbps, I can only assume that the T3 controller is part of the Titan Ridge family. 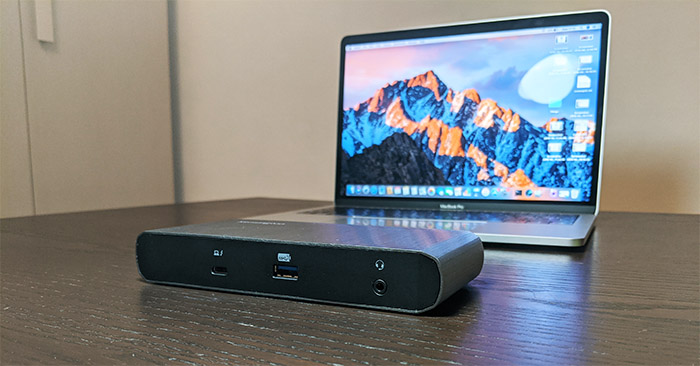 It’s worth noting that if you decide to connect to a Thunderbolt 3 laptop, the total bandwidth is 40Gbps, but this is not the only difference between it and the USB 3.1 Gen 2, since you also get the support for two 4K monitors, instead of a single one (supported by the USB 3.1 Gen2), as well as support for more protocols, so besides the DisplayPort and USB shared by both technologies, the T3 also supports PCI Express. These will be the expected limitations if you decide to use the SD5500T with a non-Thunderbolt 3 laptop and considering that I have two portable computers, one equipped with a USB 3.1 Gen 2 Type-C port (a Lenovo Y520) and the other with two Thunderbolt 3 ports (a 2017 13-inch MacBook Pro), I connected the docking station to each laptop and, using a SanDisk Extreme portable SSD 250GB (connected to a USB-C port from the rear end), I ran several benchmarks to see the difference in storage performance.

First, I connected the Kensington SD5500T to the Lenovo Y520 laptop using the provided Thunderbolt 3 cable and the SanDisk Extreme to one of the available USB-C ports so, running the CrystalDiskMark 6.0.2, I saw a very similar performance to when the SSD was connected directly to the laptop (less than 5 percent), the same as ATTO benchmark which showed almost no difference in performance via the SD5500T.

Afterwards, I connected the Kensington SD5500T to the MacBook Pro (along with the SanDisk Extreme SSD) and running the BlackMagicDesign synthetic benchmark, I again saw a balanced performance, cutting close to nothing from the throughput when using the docking station.
Note: Since the SD5500T lacks a secondary Thunderbolt 3 port, I could not connect a T3 portable SSD, such as the Samsung X5.

Next to the Thunderbolt 3 port, there’s a USB 3.1 Gen2 Type-A port with 5V/1.5A fast charging technology and further to the right, there’s a 3.5mm microphone + headphone combo jack. Connecting a pair of headphones (Sony WH-1000MX3) through a docking station can be tricky due to the possible interference, but when using the SD5500T, the sound remained clear and even when some data was transferred, there was no annoying buzz sound, so the port has a good isolation.

On the back of the docking station, the first connector to the left is a Gigabit Ethernet port which does help a lot especially if you’re using a MacBook and need a wired connection for a specific application (such as gaming through the Cloud platforms – Google Stadia or GeForce Now immediately come to mind). To test whether the SD5500T will have a heavy impact on the throughput, I connected the MacBook Pro to an AmpliFi HD GE router via the docking station (the client), as well as a Desktop PC (the server) and, from the client to the server, I got an average of 949 Mbps and from the server to the client, I measured an average of 943 Mbps – this suggests that the SD5500T will not affect the bandwidth in any way. 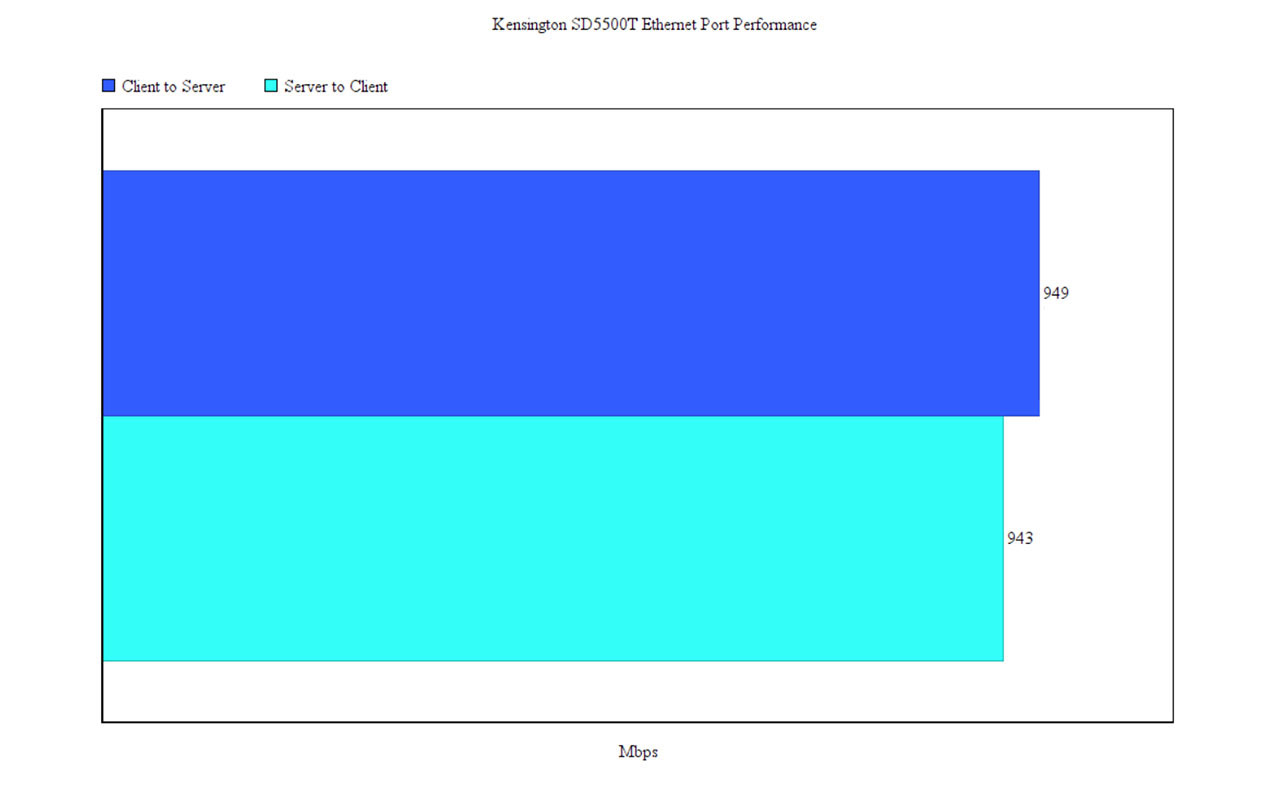 Next to the Ethernet port, there are two USB 3.1 Gen1 type-A ports which support 5V/0.9A (slow charging), followed by a couple of USB 3.1 Gen2 type-C ports with 5V/1.5A charging per port so, despite being quite compact, it’s very rich in ports – it’s worth noting that while using a Google Pixel 2 XL, I was able to get the ‘Charging rapidly’ message on the screen only when the phone was connected to the Thunderbolt 3 port. In between the two USB-C ports and the Power connector, Kensington decided to put two DisplayPorts v1.2 instead of the usual Thunderbolt 3 + DP/HDMI combo.

Of course, this doesn’t change anything since you can still be able to connect two monitors with a UHD display (the resolution of 4096 x 2160 pixels) at 60Hz, but only if the docking station is connected to a Thunderbolt 3 port, otherwise, a USB 3.1 Gen2 connection will support only a single 4K monitor at 30Hz or two 1080p monitors at 30Hz. I still don’t have two 4K monitors to fully test the SD5500T capabilities, but just the good ol’Dell U2515H which has served me very well for now – as expected, the docking station could easily stream data from the laptop to the monitor. 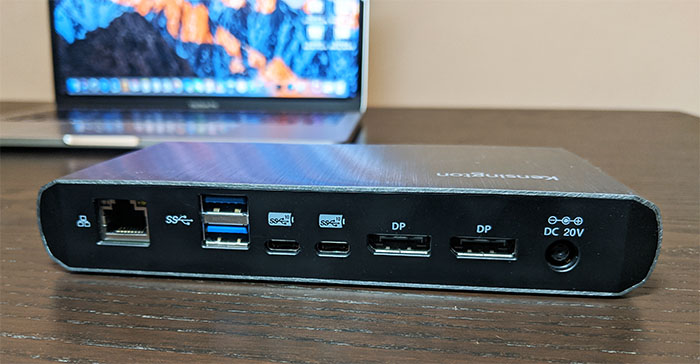 That being said, it’s quite hard to push the Kensington SD5500T to the limit and even when data was being transferred to multiple SSDs at the same time, the device became only slightly warmer and showed absolutely no signs of overheating. Furthermore, in case you don’t have enough space on the desk for the docking station, there are two VESA mount holes which can be used to attach a mounting plate (such as the K34050WW). Besides that, Kensington has added four silicone feet which do a good job at keeping the device in place regardless of the amount of connected cables. I really liked that the SD5300T had a card reader, a feature that was not ported on the SD5500T and I know that a lot of ultrabooks have a built-in card reader, but it’s a nice feature to have nevertheless. It’s also worth noting that there is no LED to let you know when the docking station is powered on and it took me by surprise since I initially thought that something was wrong with the unit.

Conclusion
The Kensington SD5500T hybrid docking station wasn’t created as a solution for those that have computers with only USB-C 3.1 Gen 2 ports, but as a means to cover other laptops besides the Thunderbolt 3 ultrabooks and overall, it does a perfect job transforming a small, lightweight portable computer into a proper workstation due to the support for two 4K monitors, the wired Internet connection, the multitude of USB ports, as well as the audio output. Furthermore, if you often need to move between offices while carrying a a laptop, you can leave the power brick behind and simply charge it via the docking station. I know that there are a lot of Thunderbolt 3 docking stations out there, but few offer the flexibility of the Kensington SD5500T, so, if you’re in the market for this type of device, this is a solution worth checking out. 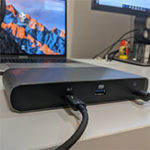