Are you familiar with the ultrasonic technology that is used by some humidifiers to push water vapors in your house? Well, the Levoit Aroma Diffuser is built around the same premise but instead of focusing towards humidifying the air in your room, the purpose of this device is to make your house smell nice, if we put it bluntly. Of course, it can’t replace even the smaller humidifiers (such as the Levoit Classic 100) due to having a much limited container and the internal construction, even though a lot simpler, it is more suited for essential oils (which can easily damage a humidifier).

So the sole purpose is aromatherapy and that should be more than enough for people that like to play around with various scents suitable for relaxing, to help them sleep or study. Furthermore, the aroma diffusers are a lot better than the burning candles and they’re also usually better than most air fresheners. 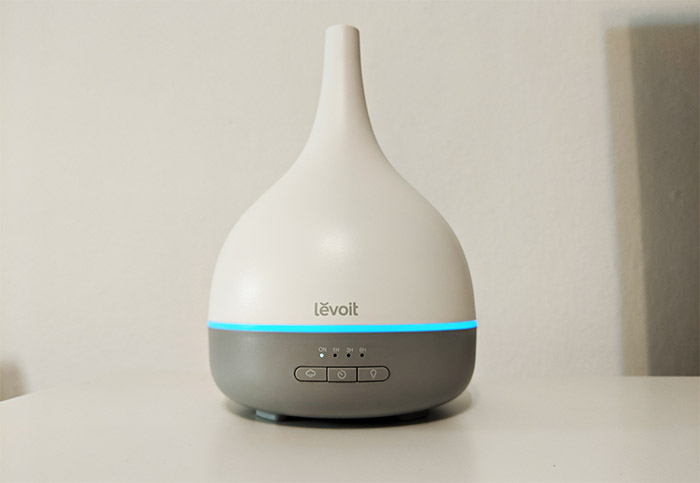 But you need to be careful since some aromas can be harmful to pets, as well as people with allergies (and I am a part of this jolly group). Other than that, the Levoit aroma diffuser is very silent (due to the reliance on the ultrasonic tech), it comes with an ambient light to complement the scent and, since it claims long lasting fragrances for up to 14 hours, it’s time to put this claim to the test.

Design and Functionality
Ideally, the aroma diffuser should have a minimalist shape, so it will fit in with any type of room and it’s important for it to not be too big, therefore requiring too much from your desk and rendering it too difficult to move around, but also not too small, allowing more quantity of water and oil inside the container. Keeping that in mind, Levoit did a decent job designing the Premier 100 aroma diffuser, so we’re dealing with a teardrop-shaped case fully made of plastic (BPA free, so it’s kid-friendly) lacking any type of wood (or faux wood) that many manufacturers like to use on the diffusers, but its white top and gray bottom does give it a neutral look, so it’s not going to stand out regardless of the room it’s going to be positioned. 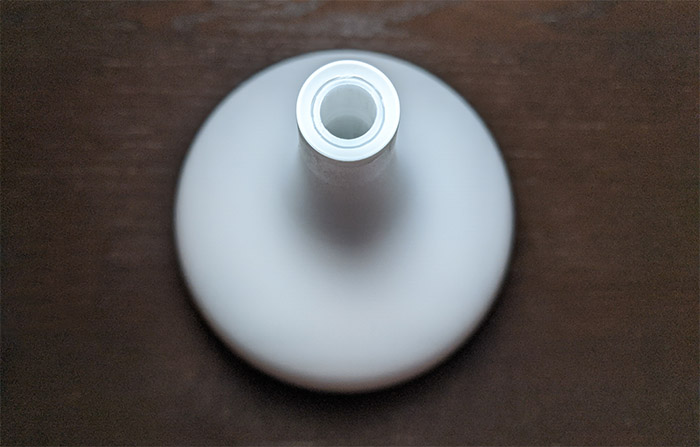 Well, unless you enable the LED ring which surrounds the body of the device (similarly to the LED on the Google WiFi) which will capture the attention of your guests. The device is not really that small and will occupy some amount of space from your desk considering that it has a diameter of 5.9 inches and it’s 8.6-inch tall.
The concept behind the Levoit aroma diffuser is quite simple and to get a better understanding about how it functions, we will have to remove the top part: you will notice that the top ad bottom parts aren’t truly connected and you can easily pull the upper section to reveal a simple container attached to the base of the device.

Here, using the provided water cup (5 ounces), pour some water along with a few drops of essential oil (about 1-2 drops per 3.3oz of water) until it reaches the MAX level, as written on the label within the container – Levoit says that you should always use natural essential oils since the synthetic ones can damage the device; also, never put only essential oils inside the container. Inside the package, you will immediately notice that quarter of a spoon which is actually a guard that you can attach inside diffuser so, when you take the top part off, the water won’t splash. After that’s done, put back the top cover, connect the power cord to the small underside Power port and press the first of the three buttons from the front. 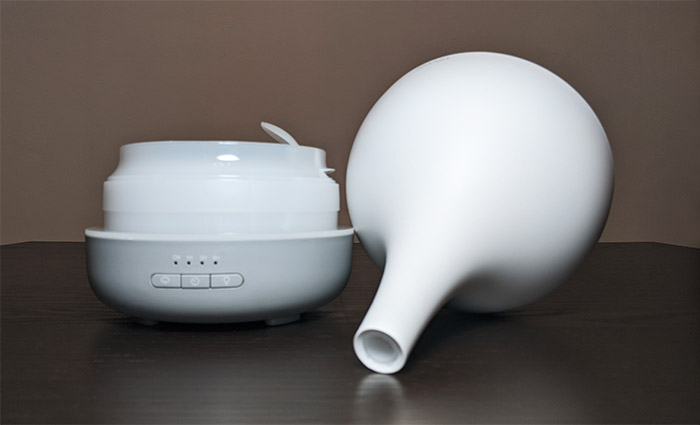 This should start the aroma diffusers and you should see the mist exiting the narrow top part of the device. But how does that happen? Like I said in the introduction, the concept is pretty much identical to the ultrasonic humidifiers, so it relies on a membrane that vibrates at an ultrasonic frequency (2.4MHz) and these vibrations pass through the plastic and into the water which is then broken in tiny particles that will form a mist. This mist will then exit the container and attempt at both humidifying your room and to make it smell better; since it isn’t pure water and there’s also some amount of oil, know that in time, it may stain the furniture, especially if you decided to put the aroma diffuser on a shelf and it’s also important to keep the device away from sensitive electronic devices (the mist may harm them), as well as making sure that the surface underneath it is water-resistant. Moving on to the front of the device, there are four LEDs which will respond to the functions you activate using the three available buttons.

First, there’s the Mist Level button which, when pressed, will immediately start pushing the mist in the room at a low level – in case it detects that there is not enough water in the container, the LED will flash red and the ultrasonic mechanism will remain disabled. If you press the Mist Level button again, then it will enable the High level and pressing the button a third time, will turn the misting off, as well as the LED, if it’s activated. The next button is the Timer and it’s responsible for choosing the period of time until the diffuser will turn off: you can choose between 1, 3 or 6 hours, each enabling one of the three dedicated LEDs which are next to the Power LED. 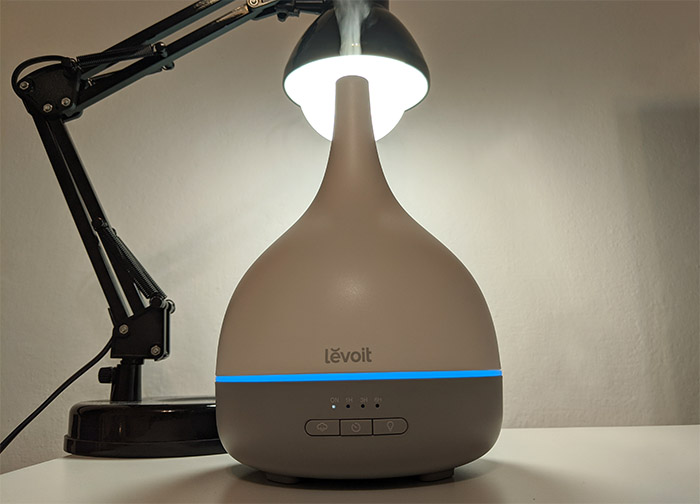 Lastly, there’s the Light button which you need to press once to turn the ring LED on and then the light will start cycling through all the available colors and brightness (it’s either 50 or 100%) and once you decided on a color, simply press the button again to lock it. You can also press the Light button again to change the current color to the next available one and, in case you want to turn it off, simply press and hold the button.

What I really like is that the Levoit aroma diffuser remembers the changes that I made to the settings and, next time I start the device, it will continue where it left off instead of asking me to do everything all over again. It’s worth noting that while it was functioning, the device did get a bit warm all around, but it didn’t show any signs that it may want to overheat (even after a few hours have passed). Levoit says that the aroma diffuser has an operating time between 6 and 14 hours, depending on the chosen mist level and in may case, after I put 5oz of water and some essential oil, I got about 10 hours of continuous use on the low level (which is about 0.3oz every 40 minutes) and let’s not forget that the container can be filled with 10 ounces of liquid, so that can amount to almost 20 hours. 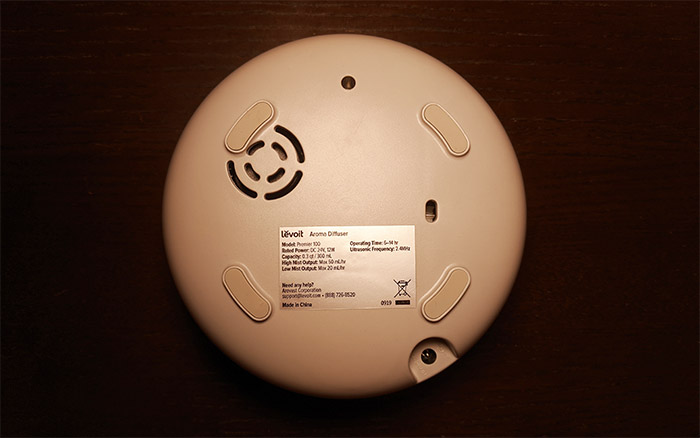 What about the cleaning process? Well, it’s quite basic since the interior is not all that complicated: unplug the aroma diffuser from the electricity socket, remove any liquid from inside the container and then you can clean the top cover with non-corrosive detergents and then wipe the base with a wet cloth – you should clean the device every time you change the type of essential oil.
Note: There are no essential oils added in the package, but you do get a discount code in the package.

Conclusion
The Levoit Aroma Diffuser (Premier 100) was designed to freshen up your room and add a bit of fragrance to the air and it does rise up to the expectations. Of course, don’t go expecting some weird health improvements since it truly can only help you relax, which can count as being beneficial to your health, but there is nothing more to it. I did find it a good alternative to the burning candles or the air freshener cans and the extra moisture in the air is a welcomed addition to the dry air of winter. I would have liked if Levoit had added some essential oils in the package and I do have to keep it away from electronic devices, but other than that, there isn’t much to complain about. 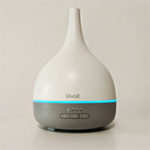