The Redkey F10 is the first vacuum cleaner from the new Shenzhen-based manufacturer (one of the few which doesn’t seem to be under the Xiaomi umbrella) and, while it’s true that the first generation is usually hit-and-miss, Redkey has added a few interesting technologies and some design elements that you don’t usually find in this price range.

The F10 is a stick-shaped vacuum cleaner that’s fully portable (relies on a rechargeable battery) and, at the first glance, it does seem fairly balanced in terms of weight. But the most interesting aspect is the foldable suction tube that allows you to easily clean underneath the (taller) furniture which can be a godsend for the people with back problems. It is obviously not the first time I see a foldable vacuum cleaner, but to my surprise, there really aren’t that many options on the market to offer it, despite its clear advantages. 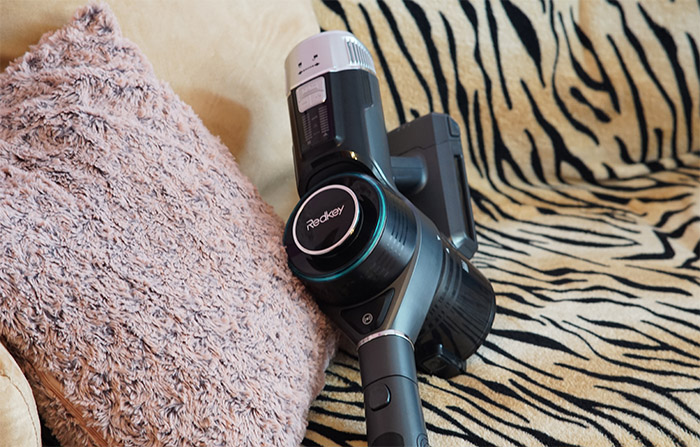 Besides the foldable tube, the Redkey F10 uses what it calls the automatic dust detection to adjust the suction power in accordance to the type and amount of dirt that it needs to vacuum and on the front of the roller brush, there’s a dust refracting lamp. Of course, it’s just a fancy way of saying that there’s a torch in front of the roller brush to help you see dust, but it’s still quite useful in tight, dark places, especially if the light is uniformly irradiated. That being said, let’s put all the manufacturer’s claims to the test and see whether the Redkey T10 deserves a place in your home.

The stick vacuum cleaner is usually designed in a manner as to put as little strain on the hand as possible, which is why the manufacturers prefer to keep the main body of the device towards the bottom, near the roller brush. Of course, if the engineers can develop a balanced device, the motor and the dust container can be kept at the top. And Redkey was forced to go with this approach because it needed the suction tube and the roller brush to be able to go underneath the furniture. You will still have some more pressure on the wrist than you would with a vacuum cleaner that has the motor at the bottom, but the trade-off is that you get the foldable tube – and yes, it can make a difference for people that have back problems. 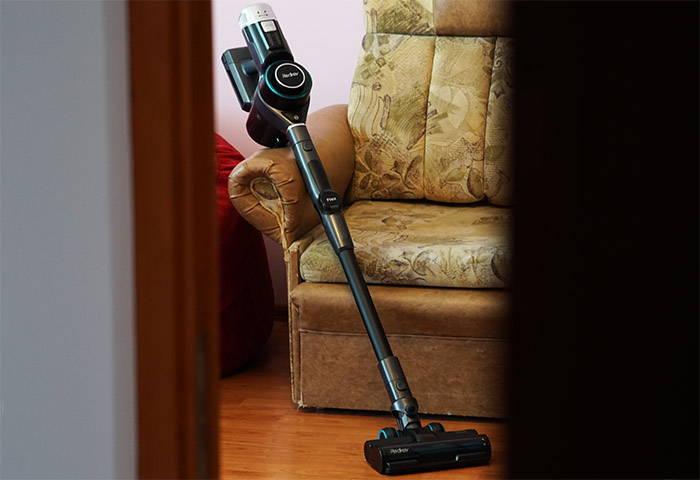 Maneuvering the Redkey F10 felt smooth mostly due to the large wheels but also because the neck of the roller brush can be adjusted at various angles. It can swivel vertically up to 90 degrees and it can move laterally to about 30 degrees on each side. Inside the package, there’s the main body of the vacuum cleaner (that contains the suction motor and the dust bin), there’s also a 26.6-inches long (or 67.5 cm) aluminum tube that has a flexible hose inside it, an electric main brush, a 2-in-1 dusting brush, a crevice tool, a charging deck and a small charger. Now let’s have a look at the build quality of each component.

The main body of the vacuum cleaner

This section is made of plastic mostly covered by a gray matte finish, the dust bin being transparent black and there are also some faux chrome elements: a ring around the point where it gets in contact with the suction tube and near the HEPA filter. Indeed, above the handle, Redkey has decided to insert the motor with the exhaust on the sides, pushing the air through a HEPA filter. You can easily get to it by rotating the silver section counter-clockwise – I really liked that the manufacturer offers a spare HEPA filter in the package. 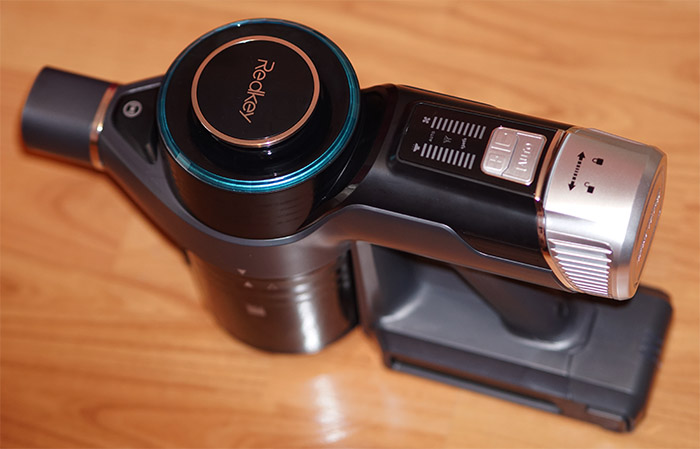 You will be able to find a secondary HEPA filter underneath the Redkey logo. The plastic here looks great (the combination between glossy plastic and the blue ring is successful), but the manual was a bit vague about how to access the filter from the top, so forcing the plastic (which is very squeaky) felt like it may break the circular top. In any case, I found out that you don’t need to rotate or force it, just firmly pull it upwards and the lid should easily come off.
Everything else is much more intuitive, such as the handle, which has a button that powers on or off the vacuum cleaner; the button does not require to be pressed all the time, so, to start or stop vacuuming, a simple light press once is enough.

At the top, there is a rectangular control panel with three buttons and an LED section. First of all, on the center, there are three LED icons, one lighting up when the Auto mode has been enabled, the middle one will show that the motor has been blocked and the last LED will light up when rotating brush is blocked – in case of blockage, turn off the vacuum cleaner and check if the sucking tube or the rolling brush aren’t blocked by some large objects. The left set of LEDs shows the type of dust that it has detected, while the right side will show the power suction level. 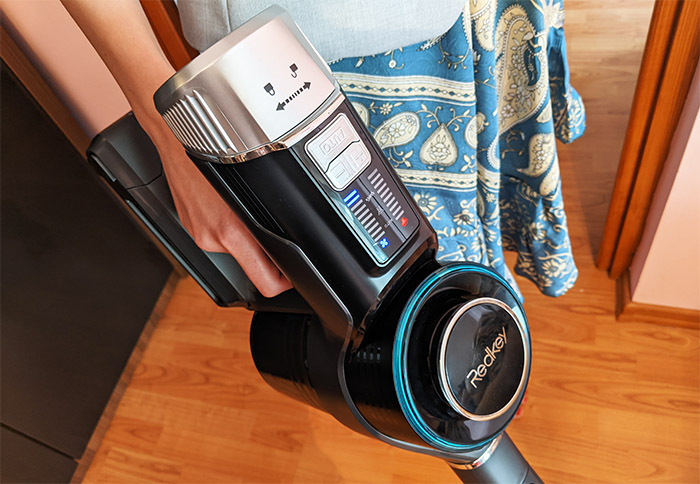 And yes, you read correctly, the Redkey F10 has some sensors that have the role of detecting the size of the dust particles (this tech seems to check the resistance that occurs inside the suction tube) and, if the user has enabled the Auto mode, then the vacuum cleaner will automatically adjust the suction power accordingly.
And this takes us to the three buttons since the first two, the Minus and the Plus allow you to manually adjust the suction power (it can go up to 23,000Pa); the third button allows you to enable the aforementioned Auto mode. I have seen a similar dust-sensing technology (which also helped adjust the suction power) on the Dyson V15 and I can confirm that the F10 also uses a piezoelectric sensor to help with the cleaning efficiency.

Still on the main body of the vacuum cleaner, there’s the dust bin which can easily be detached with an anti-clockwise movement and, inside it, there’s a stainless steel filter than you can easily wash. You don’t have to detach the dust bin to clean it, because there is a switch on the front that allows you to open the bottom of the bin. Lastly, there’s the battery module that you need to slide into place and either recharge it using the two metal pins (relying on the base station) or by connecting directly to a power adapter. Overall, it doesn’t seem that any of the parts that are often removed or handled are flimsy, so, construction-wise, the main section of the F10 seems solid enough.

The tube is advertised as being made of aluminum and it’s true but only for a bit over half of it because you get a plastic piece where it gets in contact with the brush module with two pins and a hefty piece of plastic does cover the flexible tube portion. I have mentioned the two metallic pins and they do carry electricity from the main body down to the brush to power it on. 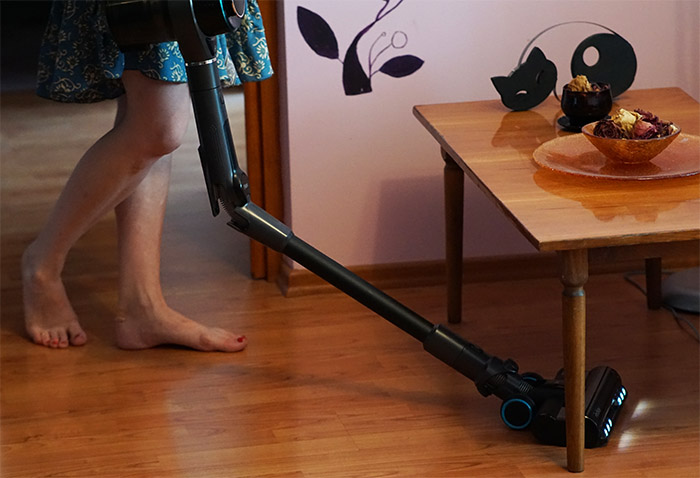 This also means that the connectors for each part is proprietary and the manufacturer has preferred to rely on spring-operated buttons for release. I have an old Panasonic vacuum cleaner that had the good ol’ rotate into place system for its tube and it has survived just fine the trial of time (it’s about 20 years old), but I also got a newer Hoover vacuum cleaner that also had spring-operated button for release and I had to replace them after a year of use. So I can’t really vouch for the longevity of this system. It may be fine, but Redkey is still a young company and has not had time to prove that it makes better vacuum cleaners than the other players.

As for the foldable tube, I found it easy to operate using the large button on the rear side and it’s also very easy to put it back into the original position. The hinge is made of plastic and, while it does seem solid, it again needs to pass the trial of time (so, we’re going to revisit this section in at least a year of regular use).

The last main component is the electric brush and it’s a well designed one. The enclosure is made of plastic and it does have a transparent section for seeing the brush, as well as two LED lights positioned on the front to help you better see the dust particles. I have already talked about the smooth rotations and angle adjustments, as well as the versatility of the two large wheels. It’s less likely that hair will gather around them as it often happens with those smaller wheels (sometimes, it even makes them pop off). I really like that Redkey has made it incredibly easy to remove and clean the brush. 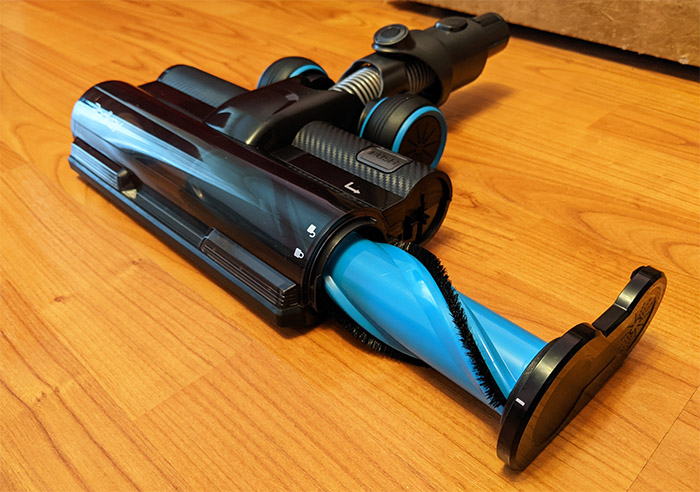 There is a PUSH button at the top which, when pressed, it unlocks the holding mechanism and you can easily pull out the brush (it’s a similar system to that on the far more expensive Dyson V15 Detect). Redkey decided to go with a fairly narrow band of bristles which go around the cylindrical section in a spiral way. The interesting thing is that the brush will rotate on its own, so you don’t have to push it repeatedly onto a spot to clean it. I also need to mention the two small wheels towards the front of the electric brush.
This part seems quite solid and I do think that it can survive for a long time, even though it’s at the highest risk due to being in contact with the ground all the time.

The 2-in-1 dusting brush and the crevice tool

Both the dusting brush and the crevice tool are fully made of plastic and they rely on the same spring-operated mechanism to be attached to the suction tube. The dusting brush is fairly generic, sporting some soft bristles at the mouth and you can adjust it to retract and reveal the inner tube (the retraction mechanism is relatively smooth). The crevice tool can be elongated to almost double its size and to retract it, you do need to firmly push it (may be worrying in the long terms, but it’s not a brush that people use that often – at least I don’t).

The charging deck is designed to be mounted on the wall, allowing the Redkey F10 vacuum cleaner to sit vertically and recharge using the two metallic pins. I know that some manufacturer offer a charging deck that can simply sit on the ground, but that’s only an option for vacuum cleaners that have the motor assembly near the bottom and not at the top. 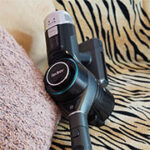