First of all let’s try to understand what a mirrorless camera is and what are the main differences between mirrorless and DSLR.
The DSLR (digital single-lens reflex) camera combines a digital sensor with the optics and the mechanisms of a single-lens reflex camera. Using this design, the light is guided through the lens into a reflex mirror which forwards the light to a prism that furthers the image to the viewfinder for you to preview your shot. To learn more about the DSLR technology check here.
Mirrorless cameras do not have a mirror reflex optical viewfinder, the light is guided through the lens directly on the image sensor.

There are two types of mirrorless cameras: the larger, DSLR-like type and the compact-style cameras.
One of the obvious difference is the size. The DSLR are larger than the mirrorless, which tend to be a lot more compact and easier to carry and handle. Other features like the speed, image stabilization or battery life usually result in a draw. The image quality is considered better on DSLR but the video quality is definitely better on the mirrorless cameras.
Obviously both types of cameras are great, the only definitive factors are the user needs and preferences.
Today, we will review a popular. entry-level and cheap mirrorless camera, the Sony A3000. 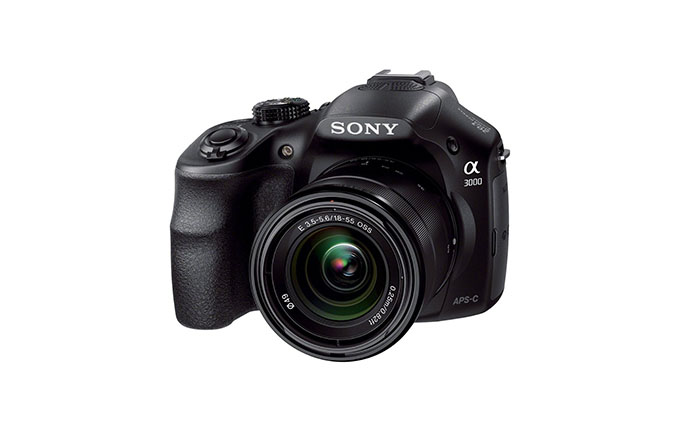 Design
The A3000 falls into the DSLR-like type as it looks and feels like a more traditional DSLR, but it is not large, more like a scaled down version.
Usually, mirrorless cameras sacrifice gripping in favour to a more compact and sleek design, but not the Sony A3000. This model is one of the most comfortable and easy to handle compact cameras that we had the pleasure to test.
The camera body is comfortable to hold and very light (9.9oz) but, although it is pretty balanced, the overall design feels kind of cheap.

On the front of the camera is the AF lamp, the E-mount and the lens-release button. On the top of the deck rests the Mode Dial, Finder/LCD button(manual toggle), a stereo microphone and the Power, Shutter Release and Playback buttons.
On the back there is a 3-inch 230,400 dot resolution LCD screen. On the right of the interface rest two soft buttons: a menu button and a programmable button, divided by a four-way wheel controller and a centred select button. Near the top of the back of the camera is the Movie record button sitting right next to the electronic viewfinder. 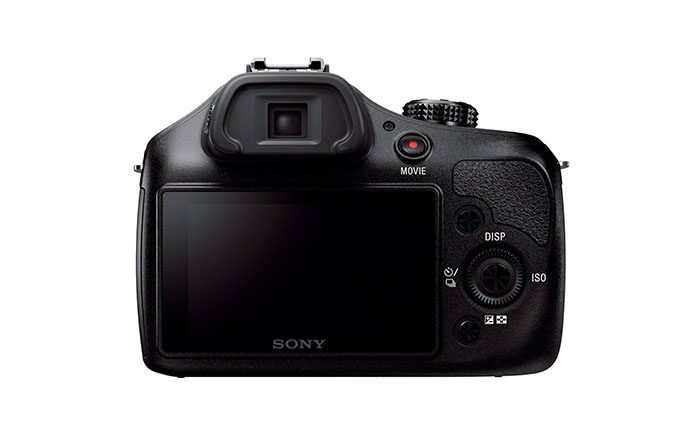 Note: At first, the menu is a bit awkward and first-time users may have a hard time navigating through it, but after some time everything will start to make sense. The first options you will see are the Camera, Brightness & Colour, Playback, Image Size and Setup. Further on, most features are customizable and although the process is not as user-friendly as we may like, eventually we got the hang of it.

On the left, directly above the printed alpha 3000 logo is a button that deploys the pop-up flash. Parallelly with the flash button, you can find a small dial used for diopter adjustment, great for people wearing glasses. Besides these, there is a rather large compartment that hides the microSD card slot and a microUSB port.
The bottom features a compartment for the InfoLithium battery pack and the tripod mount. Although the right side is featureless, the chunky grip makes the camera easy to use one handed.

Performance
The Sony A3000 features a 20.1-megapixel Exmor APS-C CMOS sensor (plus a BIONZ processor) that manage to produce some impressive photos (on par with what a DSLR can do).
From starting up the camera to actual photo shooting takes 1.9 seconds and short bursts of photos are taken at 3.5 fps.

Unfortunately, there is no mode for raw only, the camera shoots in RAW+JPG. The frame rate of 3.5 (with fixed exposure) is held through 8 JPG photos and 5 RAW+JPG photos.
Autofocus is pretty reliable and although the camera uses a 25-area contrast detection AF instead of phase-detection (which translates into a slower AF), photos were sharp and accurate.
Note: The ISO sensitivity ranges from ISO 100 to ISO 16000. 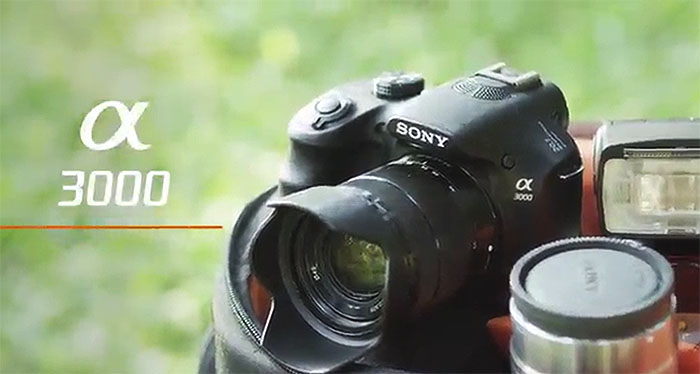 Image Quality
Like said before, the sensor is rather amazing, being able to capture great dynamic pictures, the sky wasn’t blown out, skin tones were reproduced naturally and pleasing and generally we were really impressed by the overall photo quality (although it’s not perfect).
Still, a minor issue with the sensor is that sometimes it raises the exposure a tiny bit.

Overall, we were very satisfied with the colour accuracy, there is great shadow detail, automatic white balance works very well, no noise reduction needed at high ISO levels (good results up to ISO 6400), and even in low light, the pictures remained reasonably detailed.
In exchange for better results on RAW+JPEG you get grainier photos, but this is a generalized problem. Even on lower ISO, the grain is present and although small amounts can be fixed with noise reduction, on high ISO the grain is a lot more noticeable.

Video Quality
The Sony A3000 can shoot FullHD 1080p videos at 24 or 60fps (HDR, SWeep Panorama and Range Optimizer).
Generally videos had no trailing, in some cases some artefacts were present, the colours looked a bit washed out, but the detail resolution was reasonably good.
Note: Artefacts increase with ISO sensitivity.

Battery Life and Additional Features
The A3000 has a NP-FW50 Rechargeable battery that will get you through 480 shots.
The camera comes with the entry-level 18-55mm Lens which cover a field of view equivalent to a 28-80mm zoom, the lens are optically stabilized and makes it possible to get very sharp images.
The Sony A3000 is compatible with E-mount and A-mount lenses, but compatibility with Alpha A-mount DSLR lens is offered through the LA-EA2 adapter.

Conclusion
People upgrade from point and shoot cameras, mainly for better photos. Sony A3000 is an affordable camera that is able to shoot great photos, comparable with what DSLR camera can offer, and although it may not be the perfect camera(it is an entry-level camera after all), it does offer good value for its price. 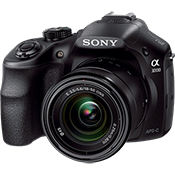