We’re close to the end of 2019, so I don’t need to tell you that everything now has to be able to connect to a WiFi network due to the massive convenience factor, but, while some devices have been quick to get a built-in wireless adapter (the entire IoT department is in booming), there are some fields where this transition happens slowly and upgrading often is not really an option.

One of it is the photography department where the gear feels fresh for a long period of time and the price tag is very high, so you will most likely end up keeping a good camera for more than a couple of years (while investing more in lenses). The problem is that older cameras don’t have WiFi capabilities (which is truly more of an inconvenience than a problem), so, to gain the ability to easily transfer your footage and photos to your computer, you need to use a WiFi SD card. 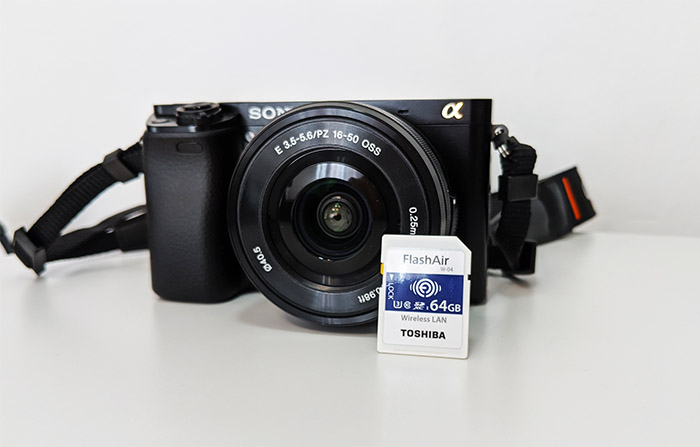 Well, it’s easier said than done since there really aren’t that many players in this field, since it’s kind of a dying market, but besides cameras, which were for the longest time the main application, you can also use them with 3D printers, a type of device which only recently has started to become a common thing in the tech world. That being said, while Eye-Fi has pretty much abandoned its devices, there’s still Toshiba with its FlashAir W-04 WiFi SD card to fill in the void and to provide the means to quickly and securely transfer data from your cameras (or 3D printers) to your computer. Of course, there are some expectations that need to be met, so let’s have a closer look and see if the fourth generation of WiFi SD cards are worth taking into consideration.

Design and Functionality
After you take it out of the package, you can immediately see that the Toshiba FlashAir W-04 looks exactly like the other SD cards on the market, but there is one major difference: it’s not microSD, so it’s as big as your SD adapters. This means that you won’t be able to use it with all your devices, but you should be able to insert it in most (if not all) DSLR or mirrorless cameras, as well as some compatible laptops (there are also some cheap dongles that you can use with your almost-port-less ultrabooks or MacBooks). 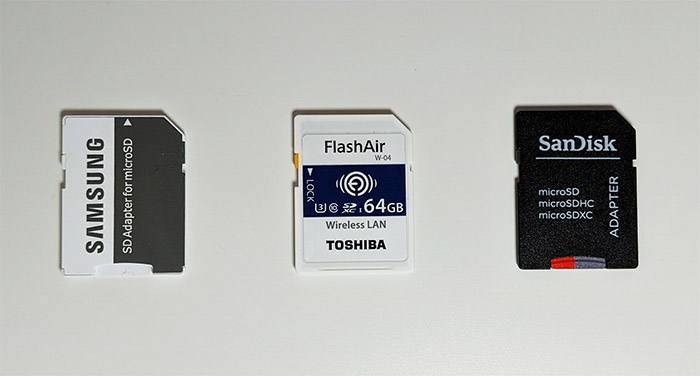 The SD card itself is made of plastic and it’s completely white with some info labels on the front and rear side and just like any other SD adapter, there’s a small Lock switch to enable the write-protected mode (yes, it’s still hardware-based); furthermore, the device is made in Japan, which is always nice to see. It also has the same size as the regular SD adapter (it measures 1.25 x 0.94 x 0.08 inches), but you can see that there is no slot for the microSD card – the wireless LAN chipset and the WiFi antenna are positioned inside the plastic enclosure, so like I said before, there really isn’t any element that gives it away that this is a WiFi SD card.

The model that I got is the SDXC 64GB USH-3 SD card which means that the default format is exFAT, the bus interface speed is up to 104MBps and the U3 Class suggests that the minimum sequential write speed is 30MBps (therefore, more than suitable for both 1080p and 4K videos). Since it’s SDXC, you need to ensure that your camera is compatible and can support SD cards equal or larger than 64GB. In any case, Toshiba also offers a 16GB as well as a 32GB SDHC I model and it’s worth noting that the 64GB variant is something exclusive to the newer generation (the previous gen spanned from 8 to 32GB), not that this is an extraordinary offering in terms of storage (the most commonly used starts from 128GB). Besides the storage improvement, the other differences between the two generation (W-03 vs W04) is mostly seen in the app functionality but before delving into it, let’s have a quick look over the installation process. 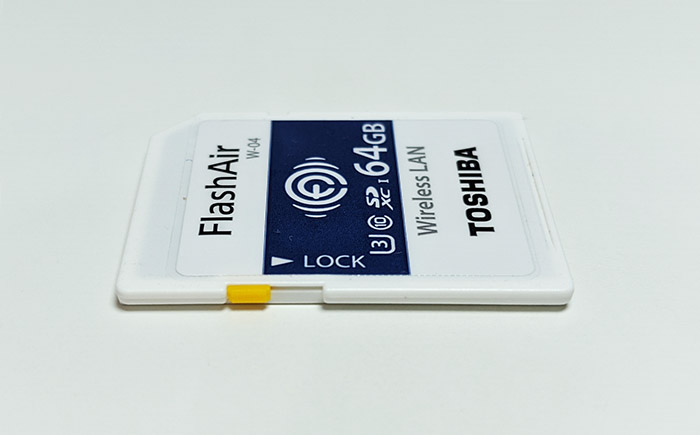 The first thing that you should do is decide on which device you will install the app (the great thing about this SD card is that it can connect to seven devices at the same time) and, if you’re going the Android route like I did (the relatively old, reliable Pixel 2 XL since I’m too cheap for an iPhone) then you should install the FlashAir app from the Google Play but, while for some users this worked flawlessly, it didn’t for me and the app would never connect to the SD card. 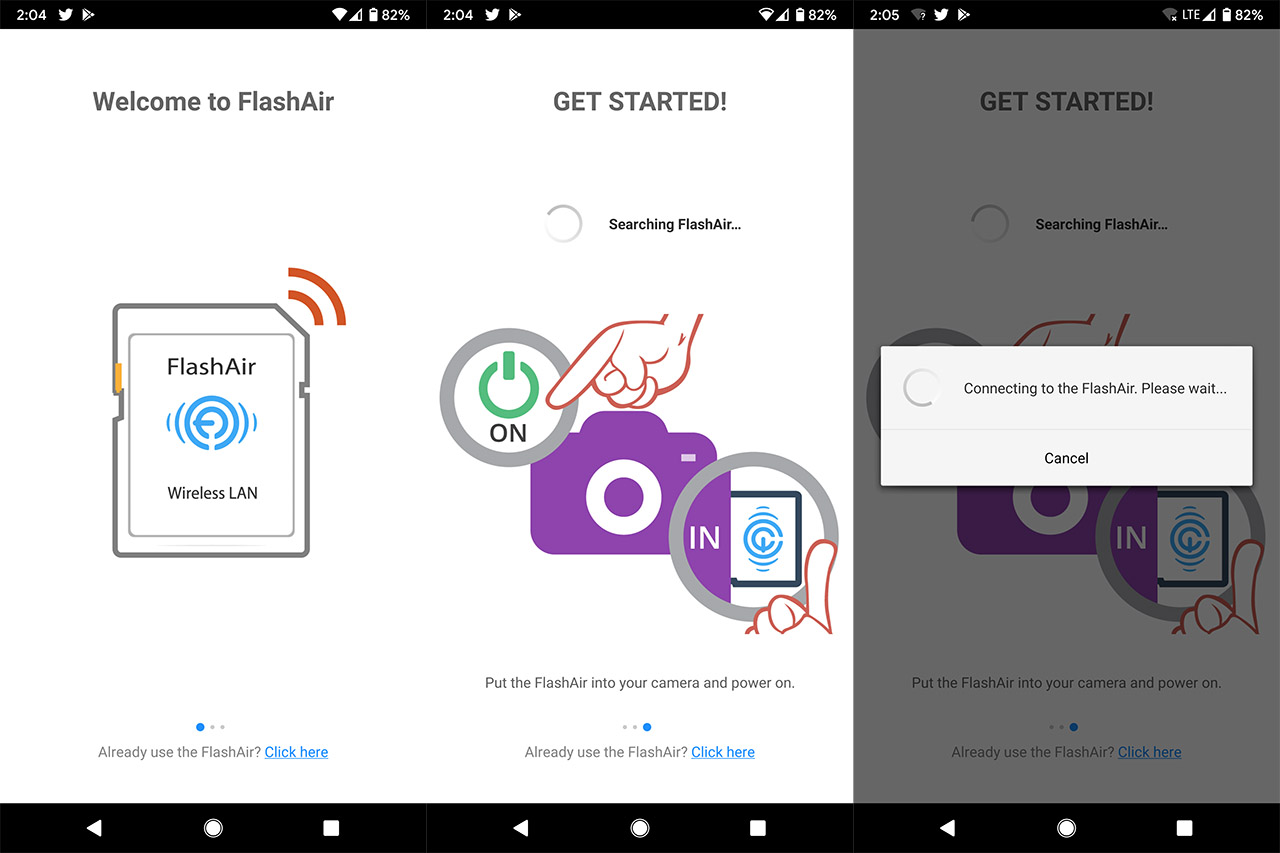 It’s a nicely designed app and all, but it’s rubbish, so, to actually get to use the SD card you will have to connect to the dedicated WiFi network (should be something like flashair_ecxxxx and the default password is 12345678) and you should get access to a rather rudimentary user interface with some folders. Every time you take a photo or video, this UI will immediately send them to your smartphone (a JPEG photo took about 2 seconds to appear on my phone) and, of course, depending on how long the video you just shot is, it could take a while until you’ll be able to check it out on your mobile device. The same approach can be used to check out the footage from a computer or tablet. 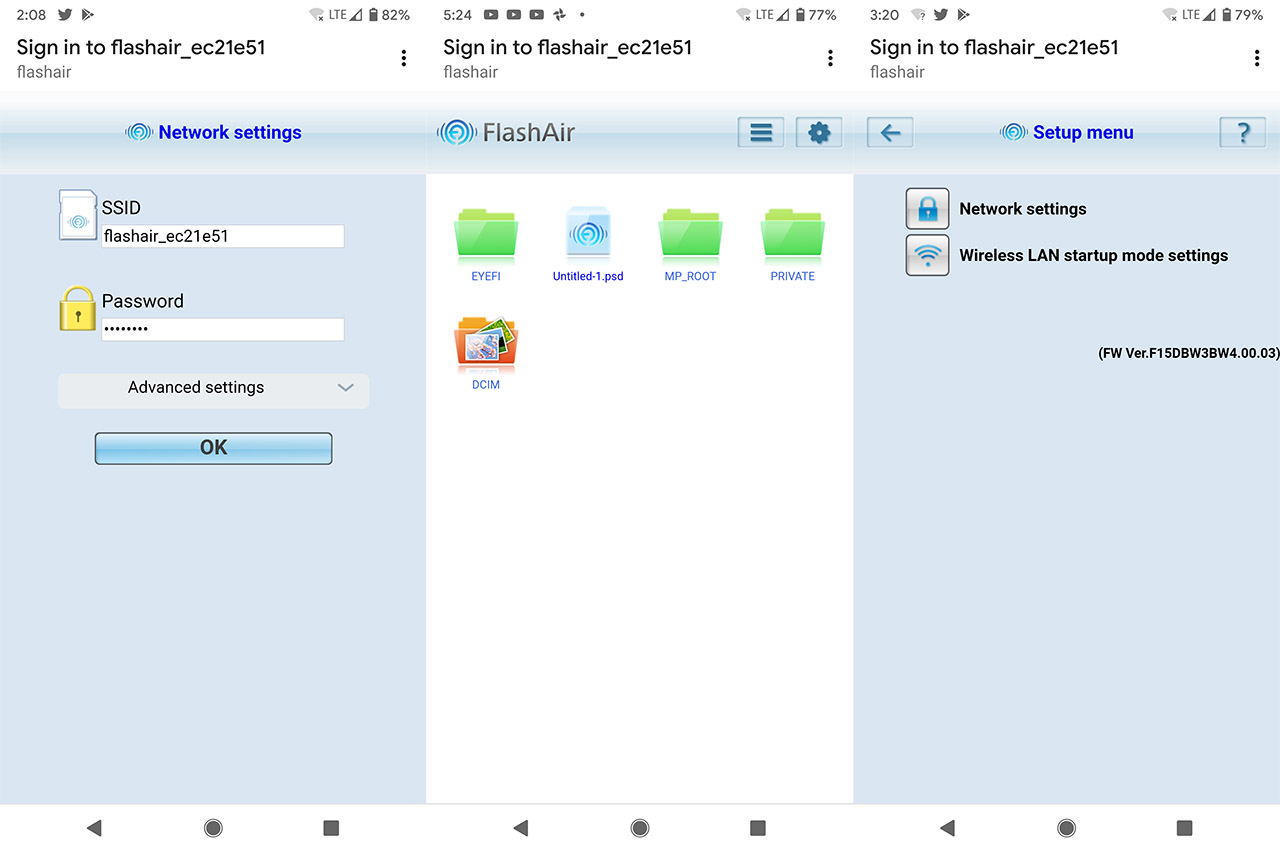 Besides checking out the files added almost in real time, there is a small cogwheel which when tapped, it opens the Setup menu: here, you can modify the Network settings (the SSID and Password – you can also use the same network settings even after the card has been formatted or reset the network settings to their initial state) or adjust the Wireless LAN startup mode settings (if left on the Automatic startup mode, then it will run immediately after the device that holds the card is turned on and, in Manual startup mode, it will require you to set a wireless LAN startup image which when set to unprotected, it will turn on the wireless functions of the card and, if it’s set to protected, the wireless functions will be turned off – very easy and straight forward…).
Note: I did check the compatibility with Android devices and it seems that it should work with version V.4.1 to V8.0, so, maybe v9.0 and v10 aren’t yet supported.

Next, it’s time to insert the SD card into a Windows 10 machine and, once again, I tried to follow the provided instructions: went to http://www.toshiba-personalstorage.net/ww/support/download/flashair/config.htm, scrolled down to Download Software and clicked on the Configuration Software, ‘read’ and accepted the End User License Agreement and then I finally got to download the FlashAir Configuration Software for Windows.

After installing the FlashAirTool, I opened it and was greeted by a small window where it said the version of the software, the Drive letter, as well as some settings. First, you’ll be able to change the Network settings (the SSID and password, whether you want the Redirecting function – you do since the mobile app doesn’t work – and if you want to enable the Internet pass-through mode, which is basically enabling the Access Point mode), enable the Wireless LAN startup mode (Automatic or Manual), enable the FlashAir drive setting (it will work as a network drive, so you can view and copy files from the SD card to your PC via wireless), Initialize the card or enable the Eyefi Connected setting (the camera will not turn off when the SD card transfers data).

I currently have no iPhone, but I do use a MacBook Pro from time to time (I’m still on Tim Cook’s whitelist), so I decided to try and connect the SD card to it using a USB-C dongle and running through pretty much the same steps as on a Windows machine, I did get quick access to the configuration page and could modify various aspects about the card.
Before finishing up, I thought it would be interesting to see the storage performance of the SD card using a couple of synthetic benchmarks. 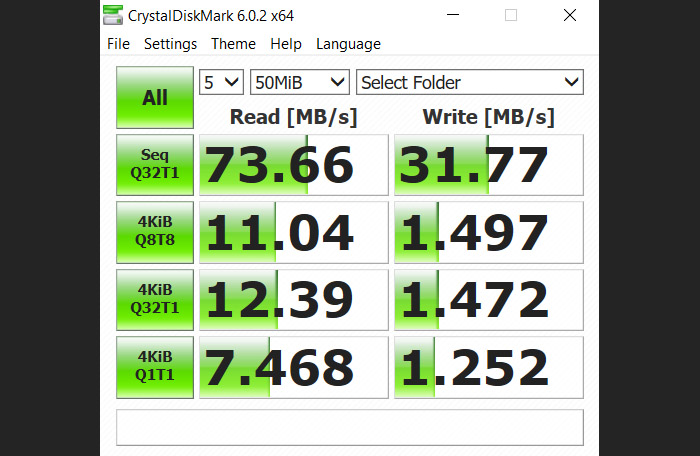 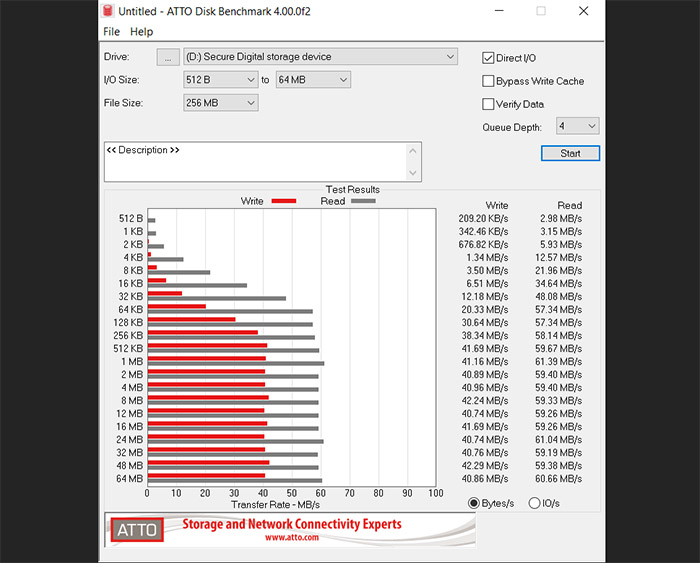 That being said, using the CrystalDiskMark v.6.0.2, the sequential read speed was 73.6 MBps and the sequential write speed was 31.7 MBps. The ATTO synthetic benchmark showed an average of 40MBps for writing files from 512KB to 64MB and between 57 to 61 MBps for reading files from 64KB to 64 MB, so it is in line with what was advertised.

Conclusion
There really aren’t that many WiFi SD cards on the market (less today than a few years ago), so the fact that Toshiba has kept this line alive until now is definitely promising, although I do expect that at some point there will be no need for this type of devices anymore. But this is not that time and our powerful, yet old cameras still need a way to connect to the Internet and the FlashAir W-04 WiFi SD card definitely does that for you. There is a problem with the Android app (doesn’t connect to the card), but there is a quick work-around and if you want to modify some settings, you can easily connect the card to either a MacBook or to a Windows computer. 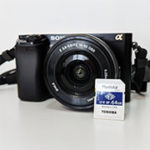