Skip to content
Categories Afoundry
The Afoundry EW1200 is a dual-band wireless AC1200 Gigabit router which, similarly to the Netis WF2780, TP-Link Archer C5 (V2) and ASUS RT-ACRH13, aims towards the home Internet users that aren’t interested into purchasing the more expensive routers with the latest technologies (such as MU-MIMO or the tri-band approach), but still want to have access to the faster AC speeds.

Afoundry is a Shenzhen-based company which specializes into the manufacturing of networking devices, including 3G modems and routers, Gigabit switches, powerline adapters, wireless LAN cards and High Power adapters and routers. While relatively popular in China, Afoundry is quite unknown in the US, but, since some of its products have found their way into the American market, I decided to have a look at the entry-to-mid-range Afoundry EW1200 router.

It’s true that most manufacturers have long passed the AC1900 limit and reached incredible heights in the wireless capabilities (such as AD7200), but I have noticed that there still are AC1200 routers released regularly, which shows that there’s a clear demand for a simple AC router at a reasonable price, with an easy-to-use interface and a proper wireless speed performance. Let’s see if the Afoundry EW1200 fits the bill. 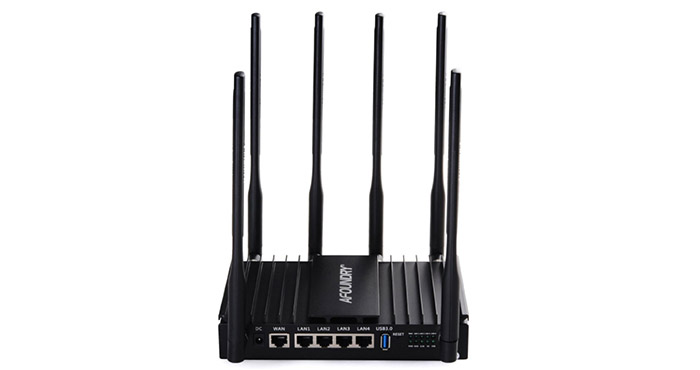 Design
Usually, router manufacturers use the rectangular case and external antennas formula and it has proven to be a successful combination. Afoundry has also adopted this design, so the EW1200 has a black four-sided case with six sturdy external antennas, but despite that, the EW1200 is a unique-looking device. The case is metallic, with small blades pointing upwards from the top side and, in the middle, there’s a small elevated piece of metal with the Afoundry logo. The six 5dbi omni-directional antennas are positioned in an unconventional way: four antennas are pointing from the back and two from the front.

It look interesting and unique (and maybe, a bit ominous and imposing), but there may be some inconveniences such as accidentally hitting one of its antennas (since they’re everywhere) when walking near the router. That’s why I think that the best way to position it is to either mount the router on the wall or on the ceiling (although it will scare your guests because of its spider-like aspect, especially if you spread the antennas). 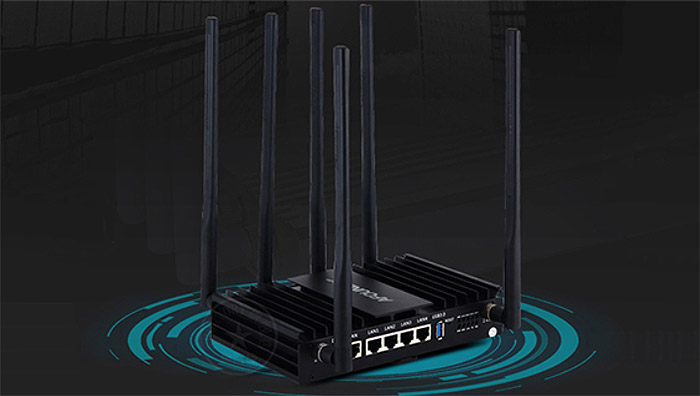 Overall, the EW1200 has an industrial overall look, but this does not mean that we’re dealing with a large device, on the contrary. The EW1200 measures 5.9 x 0.98 x 4.9 inches, so it won’t take much space regardless of the place you’ll put it. Also, the router weighs 1.76 lbs, so it’s surprisingly heavy, considering its size, but it gains some bonus points regarding its sturdiness (the four bottom feet also add to the stability factor). Furthermore, while some other router manufacturers have taken overheating seriously and added lots of vent holes into their devices, the Afoundry EW1200 seems to be lacking in this chapter and, in addition to the metal case, it can get a bit warm (especially since there is no active cooling system).

Another aspect that reinforces the industrial design is the fact that every port, connection and LED light can be found on the same side of the router. So, from the left, you get a 2.4G golden connector for an antenna, a DC power port, an RJ-45 10/100/1000 Gigabit WAN port, four RJ-45 10/100/1000 Gigabit LAN ports, a USB 3.0 port, a small recessed Reset button (use a paper clip and press and hold the button for 5 to 10 seconds in order to restore the router to the factory default settings), an array of ten LED lights which shows the status of WAN, LAN 1 to 4 (each with its own LED), POW, RUN, 2.4G, 5G and USB, and the second 5G golden connector for the second antenna. 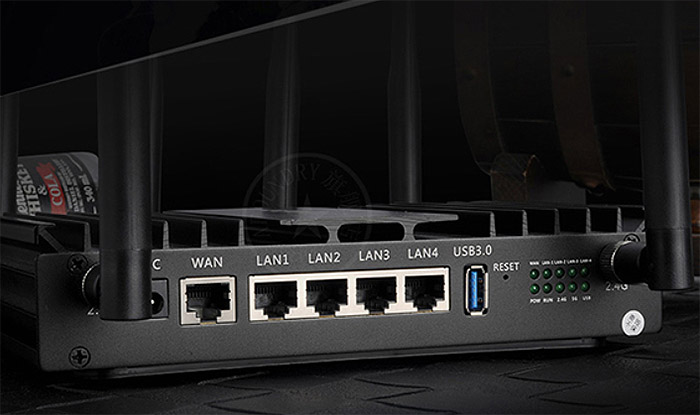 On the bottom of the EW1200, there are four zones for locking the router on the wall-mounting plate and, in the middle there’s the label which contains informations about the device (such as the default IP address, the user name, the password and the FCC ID).
Note: Inside the package, there is the Afoundry EW1200 unit, a 12V/2A DC adapter, a User Manual, the 6 omni-directional antennas, a mounting plate and the 3-foot Ethernet cable. 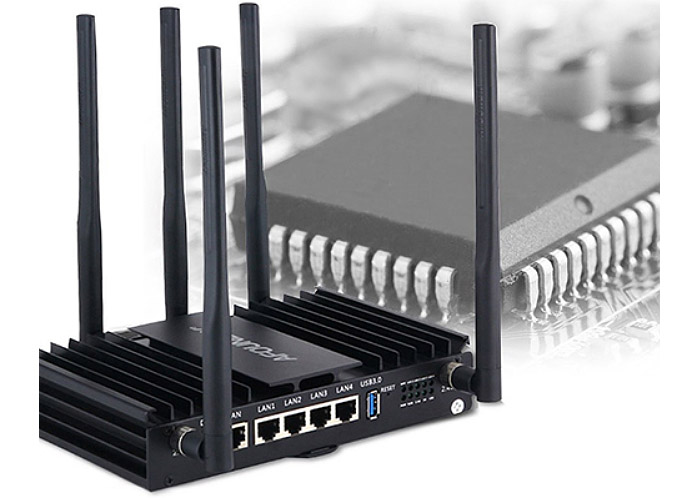 The Afoundry EW1200 features a maximum theoretical speed of 300 Mbps using the 2.4Ghz frequency band (no TurboQAM technology) and 867 Mbps, using the 5Ghz band (it adds to 1167Mbps, which is then rounded to the advertised 1200Mbps).

Performance and Connectivity
Like I said in the introduction, the Afoundry EW1200 is a simple router aimed at unpretentious customers, so you won’t really get any of the latest technologies (the price tag seems to be an indicator of that). I have not found any indications that the EW1200 uses the (now quite common) Beamforming technology, so it lacks the advantage other routers have with this tech implemented (instead of radiating the signal everywhere and hope it will reach all your devices, the Beamforming feature detects all connected devices and focuses the signal towards them, so, you get a better throughput and signal coverage).

Another feature that is missing and it has been implemented lately even in some less powerful devices is the MU-MIMO technology, such as the Asus RT-ACRH13 and the Amped Wireless Artemis RTA1300M (both inexpensive AC1300 routers). If some of you are unfamiliar with the MU-MIMO tech, know that it serves multiple clients at the same time, instead of the classic round-robin technique, but you need to have devices with compatible wireless adapters to really make use of this new technology.

These are not bad speeds considering that this is a budget AC1200 router, but, let’s see how it did with the endurance test. In the 24-hour stress test, the EW1200 did well, but, during a week, it did drop the connection a couple of times and I had to reboot the router to get it to work properly again. So, although the EW1200 has acceptable speed and has a lot of potential, it can become a bit unstable at times.

Similarly to other routers, the setup process requires you to open a web browser, insert the router’s default IP address (https://192.168.2.1) and the default user name and password (it is admin for both). Next, enter the Setup Wizard, which will guide you through setting up the WAN settings (here, you can choose PPPoE, DHCP or Static – most people will be fine with DHCP, because it means that they’ll get the dynamic IP address and other network parameters from the ISP), the LAN settings (here you can choose a different IP address and Subnet Mask – only change if you know what you’re doing, otherwise leave as default), the DHCP Server Settings (if the EW1200 works as a router, choose Enable on the Server Status and you should leave everything else as default) and the Wireless Basic Settings (first, choose enable to be able to connect devices with wireless adapters and then select the mode and channel, enter the new SSID network name, enable the Broadcast SSID, so it becomes visible for any devices in the vicinity of the router and configure the Security Mode, select the WPA Encrypt Type and enter the WPA key).

Lastly, you need to check the connection status by going to Status > WAN and if it shows connected and you can see any other info the way you set it up, then the basic configuration process is finished and you can start connecting wireless clients to your network. After finishing the Setup Wizard, you can further configure your router by accessing all the options of the UI.

Note: The default SSIDs are AFOUNDRY-2.4G and AFOUNDRY-5.8G-11AC, both having the same password, by default (88888888).
I have to admit that this is a very tedious initial setup process and I won’t blame anyone who just gave up after several tries, simply because Afoundry did not make a user-friendly set-up wizard and non-tech-savvy people should not have to lose more than a couple of minutes before having the router up and running.
The interface is minimalistic, with the main sections vertically aligned on the left: Setup Wizard, Operation Mode, Status, Wireless, Network, QoS, Security, System, AP Control, Debug Tools and Smart Reboot.

Conclusion
The Afoundry EW1200 has an interesting metallic exterior, its signal can reach very far and because it is an inexpensive device, it makes it suitable for home Internet users, but there are some flaws that need to be taken into consideration before purchasing it. First of all, while the interface is minimalistic, the setup process is not really user-friendly and it may take some time before understanding how to troubleshoot any appearing problem. Secondly, the router may require some reboots from time to time to work properly. If you can get over these flaws and want to have one of the few consumer-type metallic routers, then the Afoundry EW1200 is the perfect router for you. 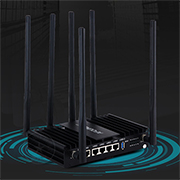