The Asus RT-AC55U is an entry-level dual-band AC1200 wireless router and while it’s true that this isn’t a new device, it still remains relevant for a large portion of the market that doesn’t need the most powerful networking equipment in their homes and are happy with a modest, but stable router to handle their daily home Internet use.

The RT-AC55U is also a great alternative to the RT-AC53U and the RT-AC56R, especially since Asus declared that these devices have reached EOL (end of life), so, if some of you don’t want to upgrade to the AC1750 or higher routers, the AC55U should provide a similar experience to the other AC1200 devices, while being kept updated regularly. It’s worth noting that recently, Asus released an interesting Dual-Band AC1300 router called the ASUS RT-ACRH13 which, besides providing the usual performance, it also comes equipped with the MU-MIMO technology.
Note: Please be aware that there is also a different router called the 4G-AC55U and this review does not also apply to that model.

Design
The Asus RT-AC55U has the same iconic design that I got accustomed with since the old days of the RT-N66U, which later got borrowed and slightly adapted by the RT-AC68U and lastly, it influenced the dynamic case of the RT-AC87U. Similarly to the RT-N66U, the RT-AC55U has a rectangular body, with the same diamond shaped texture on top (that does not retain fingerprints) and the black band which holds the Asus logo. The RT-AC68U is slightly larger that the RT-AC55U, which measures 8.1 x 5.8 x 1.4 inches and, because of its small proportions (compared with most other routers on the market), it won’t be really difficult to find a spot for it. Furthermore, because it looks like a jewellery box, it will blend in easily with the surroundings. But, if space is important and you can’t afford to lose even an inch (usual scenario in offices), the RT-AC55U can be mounted on the wall. 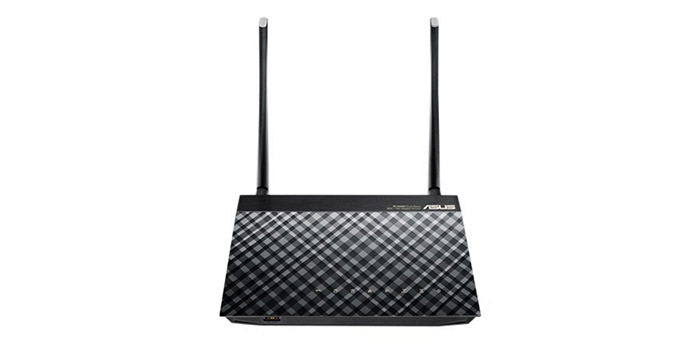 The weight of the RT-AC55U (1.09 lbs) is more than enough to keep the device still even when a lot of cables are connected and thanks to the four tall feet (with rubber pads), the router won’t budge in normal conditions. The tall feet also ensure a proper airflow underneath the case, where there are lots of vent grills. It’s nice to see that Asus did not hold back on the ventilation of the case, as you can also find some vent holes on the left and right side, as well as on the rear side, on top of the ports.

On the top of the RT-AC55U, there is an array of blue LED lights (asymmetrically positioned to the right), which show the status of the WPS (if the LED is flashing quickly, the the WPS process is active), USB 3.0 and 2.0, the four LAN ports (the single LED will light up if there’s a connection to a LAN), WAN (if the light is red, it means that there is not physical connection, the connection is limited or missing or that the router is in Rescue Mode), the 2.4 and 5GHz networks (if any of the LEDs flashes, then there’s Internet activity) and the Power (if the LED flashes slowly, then the device is in Rescue Mode).

The rear side of the RT-AC55U is the place where Asus has positioned most of the ports and connections: from the left, there’s a small recessed Reset button (useful in case you need to return the device to factory default settings), a Power button, the Power DC-IN port, a USB 2.0 port (sure, it’s a downgrade from the USB 3.0, but can still be useful for connecting USB flash drives or simply charging your phone or tablet), the RJ45 10/100/1000 Gigabit BaseT WAN port, a WPS button and four RJ45 10/100/1000 Gigabit BaseT LAN ports (there are also two connectors for the removable antennas). Lastly, the RT-AC55U has a frontal USB 3.0 for attaching external HDDs (it’s good that Asus added a USB 3.0 port, but, ideally, it should have been positioned on the rear side for not creating a mess of cables).

I’ve started to really appreciate that the antennas are removable since a lot of routers (even those recently released) have fixed antennas (manufacturers seem to not consider this as something important).
Note: Inside the package, you can find the Asus RT-AC55U unit, a RJ-45 network cable, the AC adapter, the two external antennas, a Quick Start Guide and a Support CD (with the User Guide).

Since the ASUS RT-AC55U is part of the entry-level family routers from Asus, you can’t really expect it to have implemented the latest technologies on the market, but, despite all these, it still comes with some nice additions that help enhancing the wireless performance. First of all, the RT-AC55U is a concurrent dual-band router, which means that you can have devices with 2.4GHz compatible adapters and devices with 5GHz compatible adapters connected at the same time to their respective networks (some low-prices router force you to choose which band will run at a time).

Furthermore, the RT-AC55U uses the Asus AiRadar feature (which includes the Beamforming technology and the Asus RF fine-tuning), that has the role of scanning and detecting all the connected devices and specifically focus the signal towards them, therefore resulting into better coverage and an increased throughput. As expected, there is no MU-MIMO technology and while it may have been considered common sense not to expect it in lower-priced router, things have actually changed recently. Sure, the older RT-AC55U does not come equipped with such tech, but Asus has made a bold move and actually added the MU-MIMO feature to the RT-ACRH13. Now, you may wonder if it will work properly with a low-cost router and, it’s true that it feels more of an experiment than anything else, but, the RT-ACRH13 can handle about 4 devices with MU-MIMO wireless compatible adapters, so it’s a step in the good direction.

Now, let’s return to the Asus RT-AC55U and see how it fares in the wireless testing. To do this, I took a laptop and a desktop computer, both with compatible wireless 802.11ac adapters and I tested the router performance at different distances, while maintaining the interferences to a minimum. So, using the 2.4GHz frequency and the 802.11n standard (obviously), I measured an average of 88 Mbps at 5 feet and I did saw a slight decrease to 73 Mbps at 15 feet. At 100 feet, while still using the 2.4 GHz frequency, I measured only 35 Mbps. Afterwards, I switched to the 5GHz frequency and while using the 802.11ac standard, I measured an average of 331 Mbps at 5 feet and an average of 246 Mbps after I increased the distance to 15 feet. Next, at 100 feet, the speed decreased to 66 Mbps.

Lastly, since the Asus RT-AC55U is equipped with a USB 3.0, I am going to test the storage performance of the router. So, using a 2.0GB folder (containing miscellaneous files, such as audio, video or texts), I measured an average read speed of 18.2 MBps and an average write speed of 10.8 MBps. Unfortunately, this is not a really good performance, so I wouldn’t rely on this router to be used as an alternative to a NAS server (you can do that with the Linksys WRT1900ACS though).

The Asus RT-AC55U features the same ASUSWRT interface and takes pride into the ’30 second setup’ process (in reality it will take a couple of minutes). In order to access the UI, you need to open a web browser and insert the default IP address (192.168.1.1 or https://router.asus.com), which will automatically launch the Quick Internet Setup (if it’s the first time you access the interface). The QIS process guides through choosing the connection type (it can be Dynamic IP, PPPoE, PPTP, L2TP or Static IP – the process can also be done automatically), it allows you to assign the SSID and the security keys for your 2.4GHz and 5GHz wireless connections. And that’s pretty much it, the basic setup is done and you can now access the interface and further configure the router. 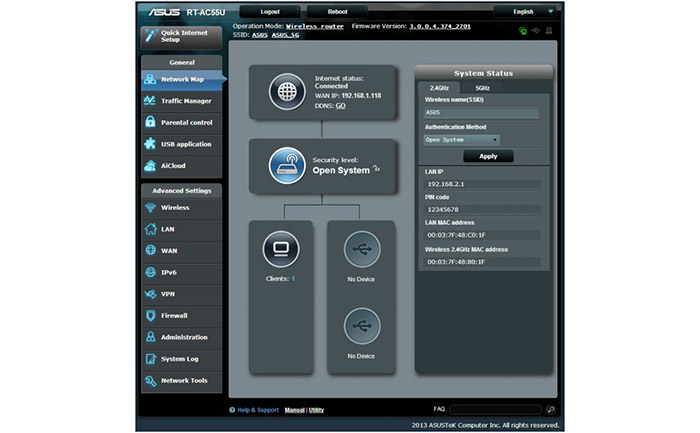 The UI has the main options on the left, each opening a new windows on the middle. These options are divided into three sections: Quick Internet Setup, General and Advanced Settings. The General section contains the following options: the Network Map (shows the Internet status, the Security level, the number of clients, USB devices and a small right window which, by default shows the System Settings, but it also shows in-depth settings for each previously mentioned section), Guest Network (it supports up to six SSIDs, three for each of the wireless bands), the Traffic Manager (the QoS allows you to create rules for prioritizing the way your bandwidth is being handled by the applications – by default, gaming and web surfing are set at the highest priority; the Traffic Monitor shows the incoming and outgoing data packages), the Parental Controls (allows you to filter the Internet access by the client name, MAC address and to create schedules), the USB Application (Media Server, Network Place(Samba) Share/Cloud Disk, FTP Share and Miscellaneous setting) and the AiCloud (cloud service that allows you to synchronize, save, share and access your files). 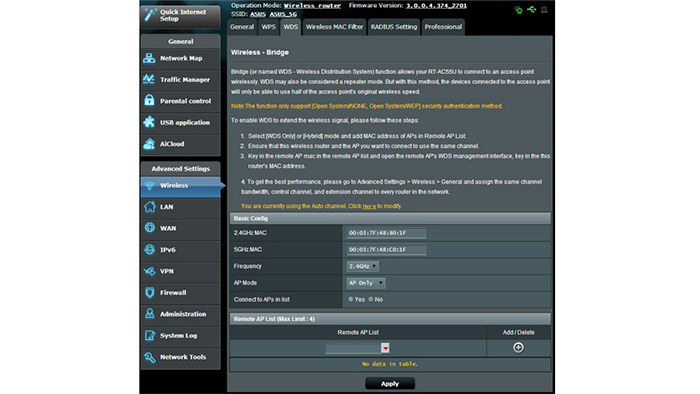 Conclusion
Although not really a new device, the Asus RT-AC55U can still be considered relevant for a large portion of home Internet users, since it delivers what an AC1200 router should: good coverage, acceptable wireless performance, network stability, an aesthetically pleasing design and a coherent interface which most of the people can follow with ease. Of course that there are other newer and better alternatives on the market, but the RT-AC55U had time to mature and hopefully, deliver a good experience to most of its users. 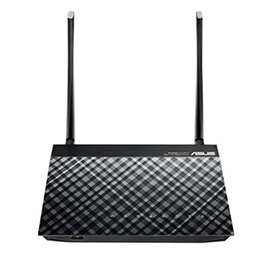