But, the second game that I checked was Ark Survival Evolved and things were a bit different. Sure, it did run at a lower res, but I did notice slightly more stutters. It’s nothing game breaking, but sudden movement will freeze the screen for a split second. I could still play the game without major issues, but it wasn’t a perfectly clean performance.

The Software and the Support

The AGM H5 Pro uses Android 12 and, just like the Android 11 that the Glory Pro uses, it’s very close to stock. I think the only apps that are not from the default Google suite are the User Defined Key, which hardly qualifies as an app to begin with, and the Clean function which clears the RAM. Other than that, there’s the Google News when swiping right and the entire menu of apps will, show up when swiping up.

Swiping down will open the Notifications and a smaller version of the quick action menu. The latter one can be expanded and I was surprised to see the Screen record option which was something that Apple offered for some time. There’s also the possibility to select an approximate location for those pesky apps that just want to know where you are regardless if the actual use is for the functionality of the app or not. I also did like the larger icons, the animations and overall, the responsiveness of the GUI.

But let’s address the elephant in the room: will the AGM H5 Pro see any software update and even an upgrade to Android 13? to my surprise, I did get a software update while testing the AGM H5 Pro and I suspect some more will continue to arrive, but I am not sure that there will be a switch to newer Android version. And, if we follow AGM’s behavior in the past, I am fairly sure that the rugged smartphone will stay with Android 12 for its entire lifespan.

I have experienced some random reboots when I tested the Glory Pro, so I was concerned whether this is something that may happen with the AGM H5 Pro. Fortunately, the device has been free from issues for now (the last three weeks of testing), so all is good.

The AGM H5 Pro features a 48-megapixel main camera and yes, I know that the Glory Pro seems to use the same camera, but it’s not the same Sony sensor. Instead, the AGM H5 Pro uses a Samsung S5KGM2SP sensor with an aperture of F/1.79 and it’s actually decently capable. The photos have the same 8,000 x 6,000 pixel resolution and the videos are captured at 1,920 x 1,080p (30fps), so I decided to take a few photos and some videos to discern the performance of the main shooter.

When I tested the Glory Pro in January, there was a beautiful blossoming tree, which lacked any flower during the summer, so I just shot some leaves, the sky and my neighbors houses. As you can see, it’s a decent photo, with enough detail and fairly accurate reproduction of color. But, it does have a slight issue when trying to focus on specific areas (I left it on automatic, but it can be adjusted manually as well).

For this reason, we have some clear and detailed branches, as well as a part of the road and yard, but everything else is less detailed. I did check the sky, where a lot of cameras tend to fall apart, but the leaves and pins seem to be decently reproduced, although some noticeable chromatic aberrations were present. Perhaps the first photo had too much going on, so I captured a photo of the sky, while keeping parts of the trees. And the camera did well.

The sky’s color reproduction is good and there was less chromatic aberrations than I expected, so the camera likes a more balanced amount of light (the first photo was far brighter). Or so I thought, because after I moved to a complicated photo (yet again), in the shade, the camera tried again that blurring effect.

This makes me think that AGM focused more on portraits than landscape shooting. Then, I moved to the macro photos. The Glory Pro handled them pretty well and so did the AGM H5 Pro. There is a good amount of detail on some close parts of the plant, but I couldn’t keep the focus on the areas that were very near the lens.

So, overall, the camera seems to be in the mid-range area for photo capturing, but what about video shooting? It’s not that great. The videos are not that detailed and even during the day, it doesn’t handle that well transitions between bright scenarios and darker ones.

Furthermore, I took the chance to film the only rain we got the last couple of months and as you can see, the colors are a bit washed out, while the movements betrayed a lack of (or poor implementation of) optical movement stabilization.

For this reason, I think that you should avoid relying on the H5 pro for filming, since it feels very entry-level in this regard. Before moving on, I do have to talk about the night vision camera which seems to be the same as on the Glory Pro. And it actually is, up to a certain point because you can’t capture a photo immediately, but need to start filming and then you can capture a frame. That’s how we end up with this photo:

The Call Quality and Connectivity

As I said many times before, it’s nice to have a small computer in your pocket, but the idea behind a smartphone is that it needs to be a phone first and a smart device later. Some manufacturers struggle to understand it, especially in consideration to conference calls. Yes, I like that the microphone can cancel anything else outside my voice, but I really don’t like to be glued to my phone when calling, since moving 5 feet out would render my voice inaudible (and yes, I am talking about Samsung smartphones).

The good news is that the AGM Glory Pro didn’t suffer from these issues and neither does the AGM H5 Pro. Sure, my voice wasn’t as crystal clear as when I used an iPhone, but it’s still more than fine. The caller can be heard from the rear-placed speaker, so it’s up to you to decide how loud and clear you want the voice to be (hint: it’s very dependent on the surface it sits on). As for WiFi, the AGM H5 Pro can connect to either 2.4GHz or 5GHz networks, with the support for 802.11a/b/g/n/ac standards.

Yes, the Arctic battery is gone, so you can no longer put the AGM H5 Pro in the freezer, but the good news is that we got a bigger battery!

Indeed, it grew from the 6200mAh of the Glory Pro to 7,000mAh, so, paired with the lower resolution and the screen with a generic refresh rate should equal more than two days of battery life, right? Well, the manufacturer does promise up to 21 hours of continuous video playback or 10 hours of gaming or 423 hours in standby mode (very specific number). When I used it as my daily driver, I had to recharge the phone about once every three days (60% brightness, YouTube videos + mail checks and some social media, the usual stuff). As I mentioned before, there is no wireless charging, so you either have to rely on the charger provided in the package or on the docking station.

Is the AGM H5 Pro just a more affordable Glory Pro? In some respects, it is, but it has also proven to be better in others. The rugged body is pretty much the same across the two models, so it can survive in a harsh environment and the loud speaker is now clearly a signature of the series.

The resolution of the display is not that great, but I do admit I liked the layout and the user experience a bit more than on the Glory Pro. Maybe it’s just the newer Android, maybe it’s AGM’s touch; either way, it felt like a more satisfying experience. The LED ring is a strange feature and, in its current state, it seems like a gimmick, but I do appreciate the larger battery. So, overall, the AGM H5 Pro seems like a fairly balanced device and, if you don’t mind its size and being stuck with Android 12, then definitely give this rugged smartphone a chance. 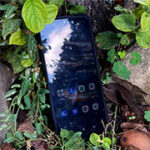