In order to compare the wireless performance of both routers, I tested each device using two computers, one is a Desktop PC and will act as the server (connected via cable), while the other is a laptop equipped with an Intel 8265 2×2 MU-MIMO WiFi adapter which will act as the client (both routers will be set on the 80MHz bandwidth). First, I connected the clients to the Asus RT-AC86U’s network and, on the 5GHz band, from the client to the server, I measured an average of 572 Mbps at 5 feet, while at 30 feet, the speed remained consistent at 476 Mbps. 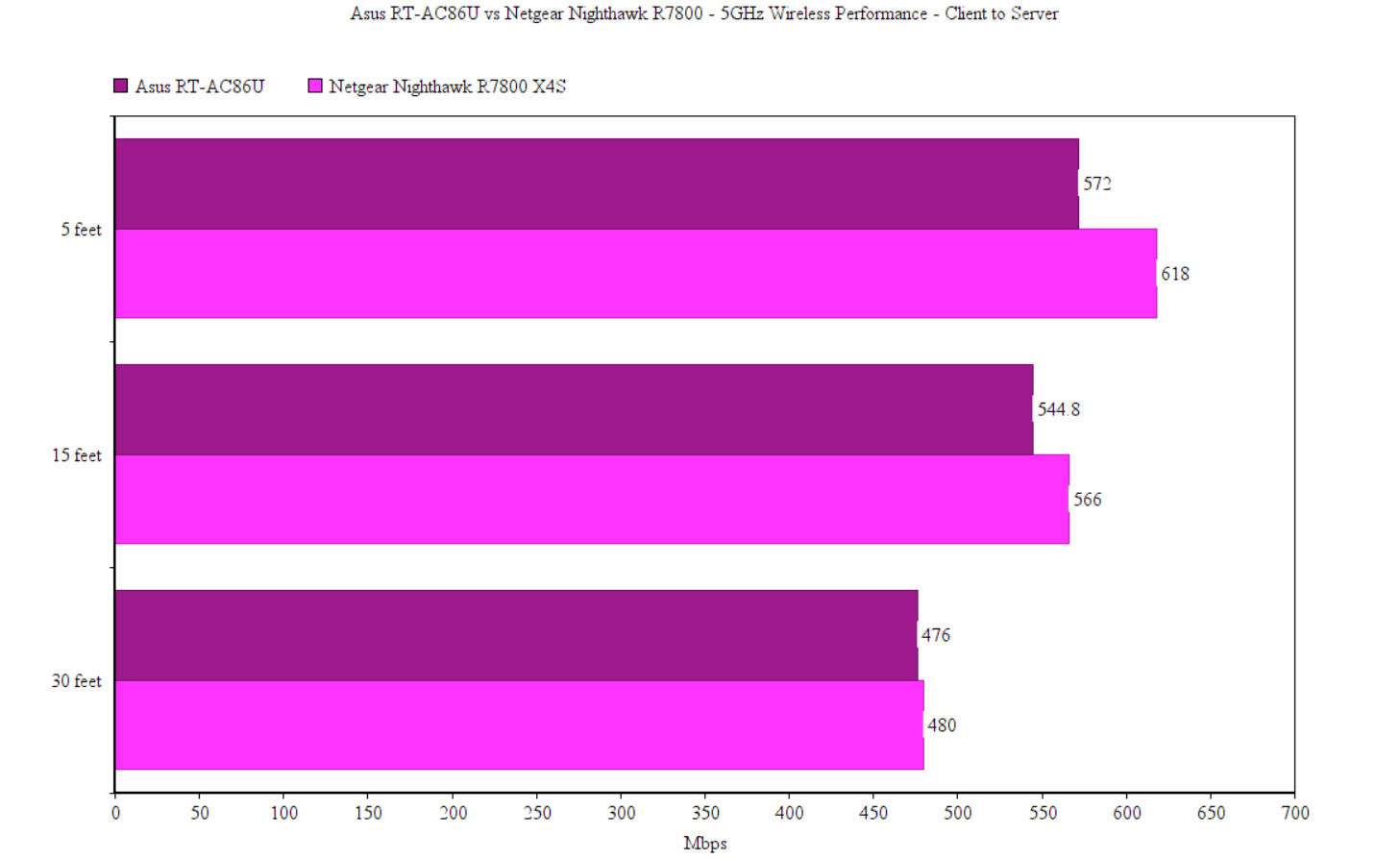 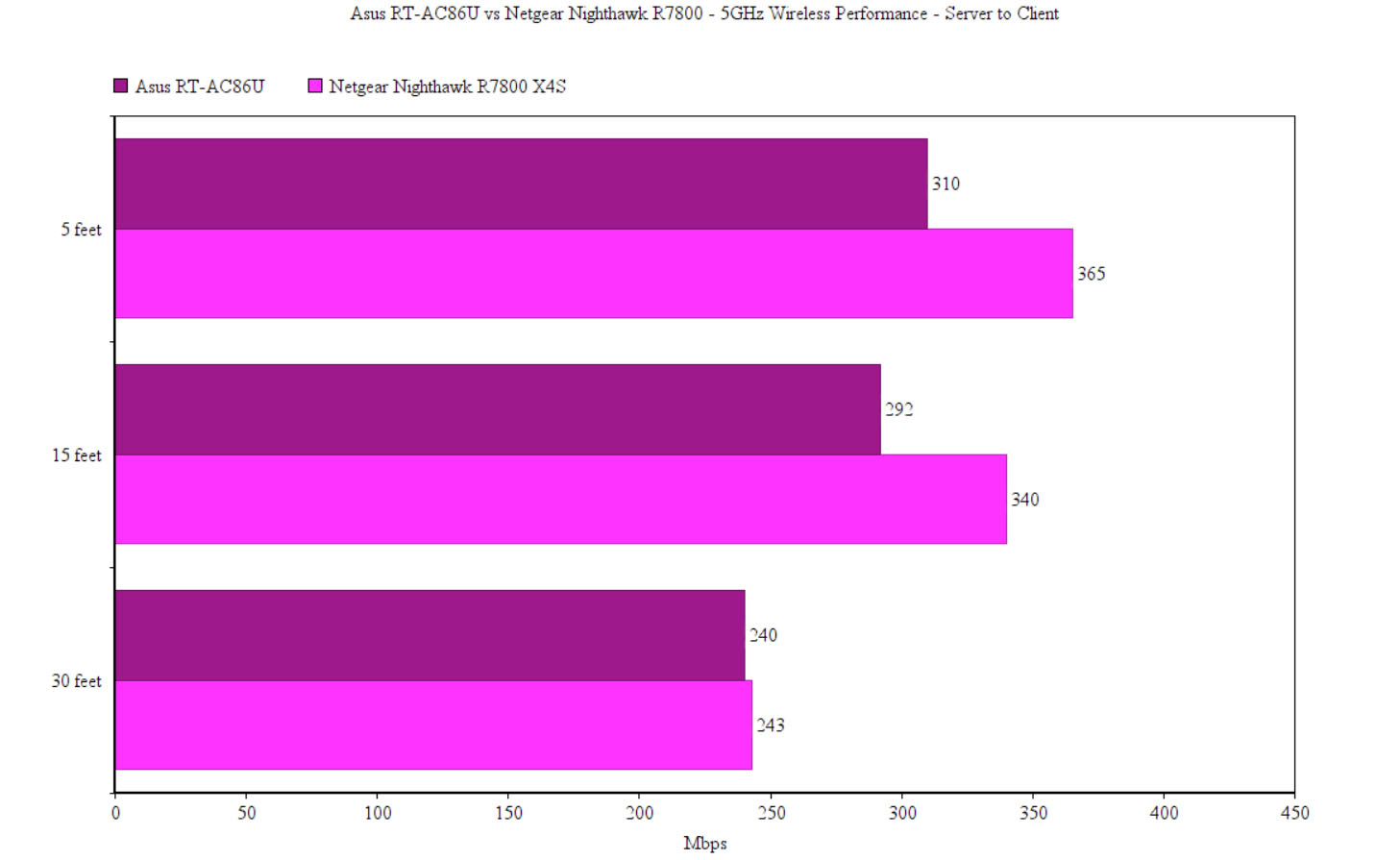 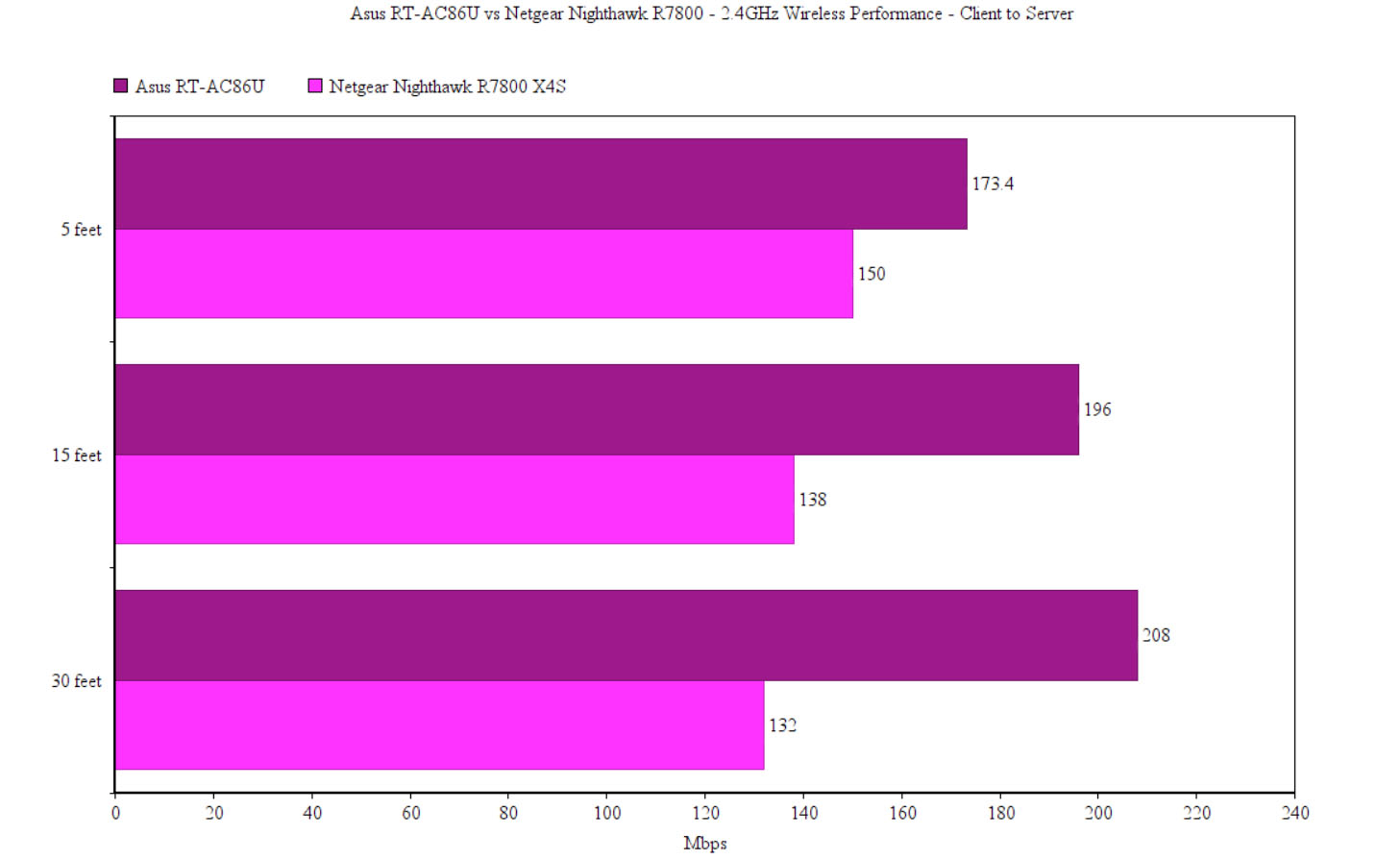 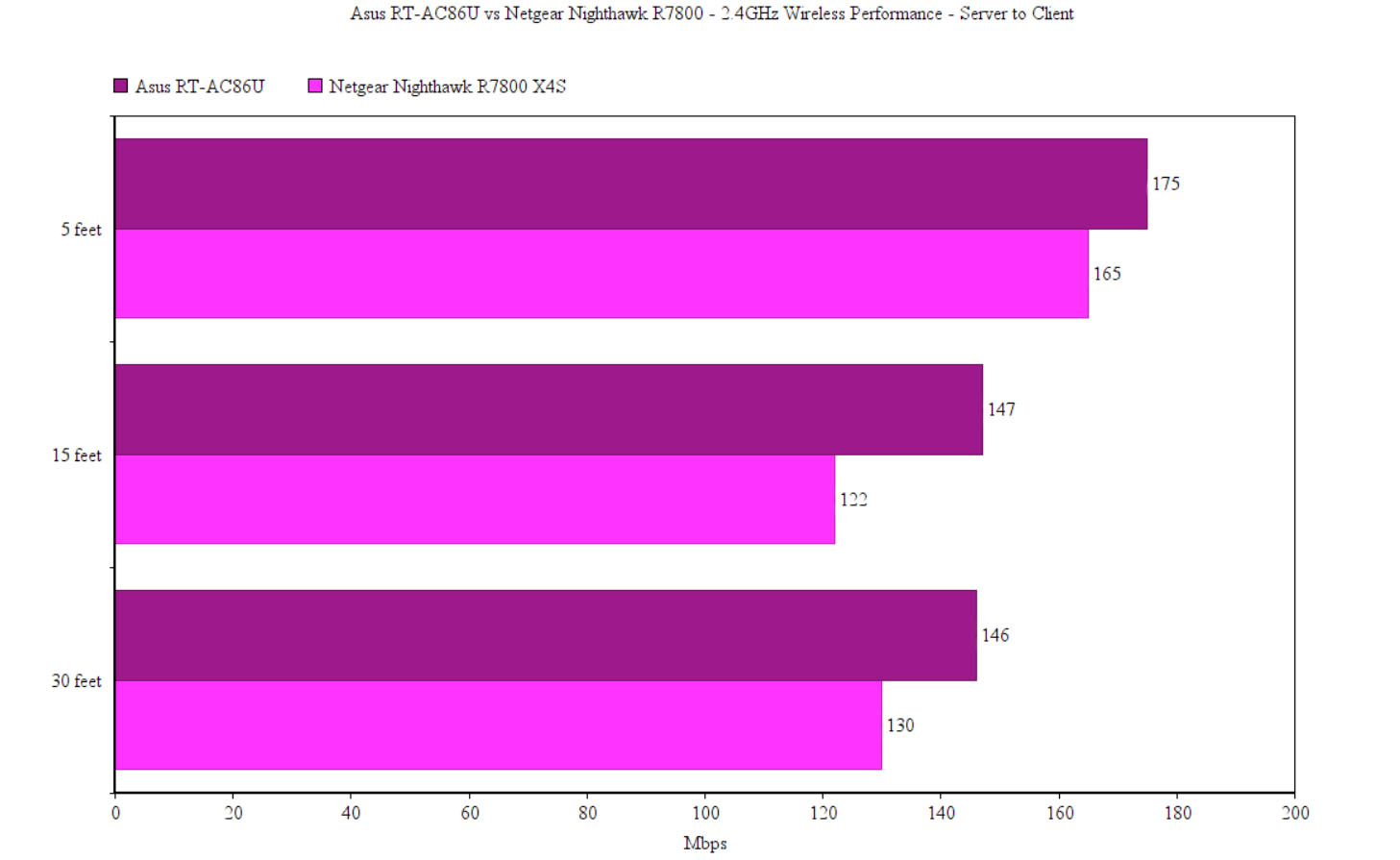 Verdict: The Asus RT-Ac86U offers a solid wireless performance, lots of features (from which the AiMesh compatibility) and a great storage performance, but, as I expected, the Netgear Nighthawk R7800 X4S excels in the wireless performance department (specifically, on the 5GHz band), so it does win this round (I still haven’t had the chance to see the true potential of the R7800 with the PCE-AC88, but it’s a work in progress).

Software
Both Asus and Netgear give the user two options to configure and maintain the network: either using a mobile app or through the web-based UI. The Asus mobile app is intuitive and it takes the user through some simple steps to configure their network (set up the network connection, choose the SSIDs and passkeys and the admin name and password). The Nighthawk app’s initial configuration process is also reasonably fast and intuitive, guiding the user through setting up the WiFi Network (SSID and password), connecting to the Internet and updating the firmware (you will also be asked to create a Netgear account which is useful for remote management). 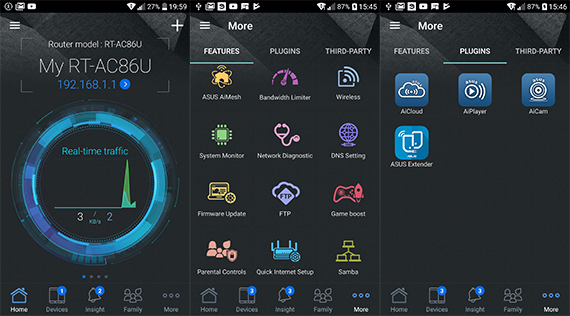 The Asus app looks very modern, the Dashboard displaying various stats about the network (with a cool circular animation) and, pressing More summons all the available options divided into three sections and positioned in a similar manner to how the apps are laid on the Android and iOS.

The first section is the Features which allows you to configure the AiMesh nodes, limit the upload/download Bandwidth for the connected device, configure the Wireless settings (includes setting up the Guest Network), perform a Network Diagnostic, select your preferred DNS, set up the FTP, the Game Boost feature (a form of QoS for a better gaming experience), configure the Parental Controls (block the Internet access for specific devices on certain periods of time), Security Scan (uses TrendMicro for scanning the traffic and detect any breaches of security), WiFi Block List (here, you can prevent some clients to connect to the WiFi network) and more. The Plugins section includes the AiClous, AiCam, AiPlayer and Asus Extender, while the last section is reserved for the Third-Party apps.

The Nighthawk app is clean and fast, with all its options laid out in two vertical rows immediately underneath the router icon (click on it to view Internet connection details or update the software). That being said, the app allows you to change the WiFi Settings, view the connected Devices and pause their access to the Internet, enable the Smart Connect feature, configure the Guest WiFi networks, set up the Parental Controls and more (I was surprised to see that, while the R7000P fully supports Circle with Disney, the R7800 has a limited compatibility – it requires the 5GHz radio to be disabled and the wired clients to be assigned as Unmanaged Clients). 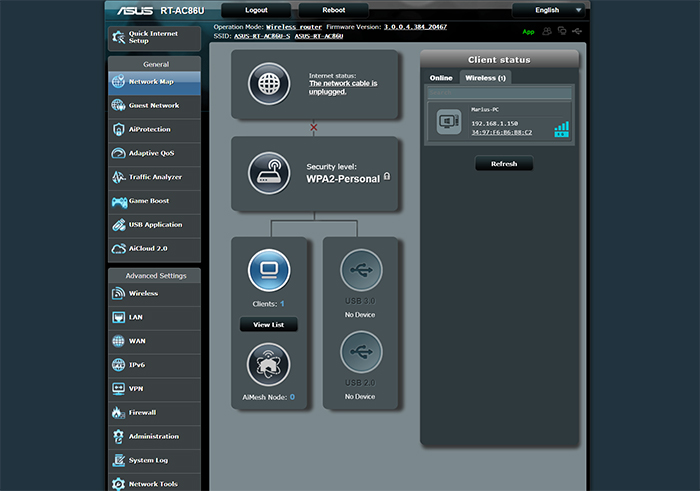 As expected, both routers offer the full configuration experience through the web-based interface. So, while the ASUS WRT interface offers everything found on the app, it also comes with additional features, such as the Adaptivce QoS, the WTFast GPN and some more Advanced capabilities which include setting up the Dual WAN, the Port Triggering and Port Forwarding, IPv6, the VPN (PPTP, OpenVPN and IPSec VPN), the Firewall and changing the Operation Mode between the Wireless Router (AiMesh Router mode), Access Point / AiMesh Router in Access Point mode, Repeater Mode, Media Bridge or AiMesh Node. The Netgear Nighthawk web-based interface includes a similar set of features, such as the QoS, the Port Forwarding / Port Triggering feature, the VPN Service (can use the Dynamic DNS service for gaining access to restricted websites or service), UPnP, Static Routes, VLAN/ Bridge Settings and IPv6. 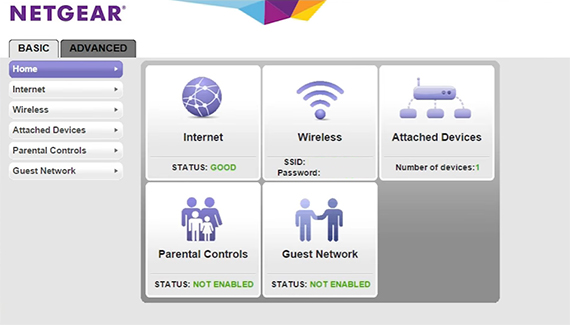 As a bonus, both routers support the installation of third-party software, Netgear relying on DDWRT and Project LEDE (OpenWRT), while Asus relies on the Merlin firmware which looks almost identical to the original software, but it offers more flexibility and additional features (such as the ad blocking feature that I recently explored).

Verdict: The Netgear firmware isn’t known as one of the best on the market since, despite offering a large array of features and options, the UI is slow and, depending on the user’s tech knowledge, it may also feel unintuitive (on the positive side, the R7800 constantly receives firmware updates). The Asus firmware, on the other hand has often been praised for its efficiency and, while it offers a similar set of features, the user experience is superior, so it wins this round.

Conclusion
It’s difficult to choose the winner because the Netgear Nighthawk R7800 is definitely the better performer in terms of wireless speed, while the Asus RT-AC86U is far more suited to handle powerful applications (such as VPN) because of its potent internal hardware. Furthermore, the RT-AC86U is ahead in terms of software and the support from the Merlin third-party firmware is definitely appealing, but, if it’s raw speed and better range that you’re after, then the R7800 is the best option, otherwise, the newer Asus RT-AC86U may be better suited for today’s exigences (and probably more future-proof). 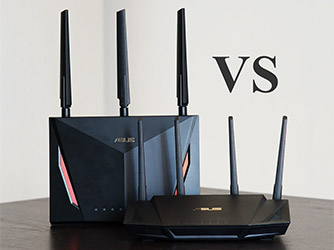 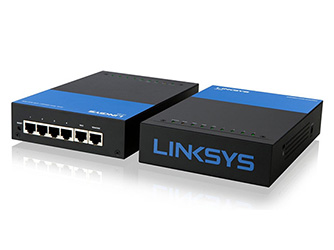