The Asus RT-AC86U and the Netgear R7800 X4S are two of the most popular wireless routers on the market, the latter focusing towards covering more space with WiFi than your average router, while the former is equipped with newer and better internal specs, therefore making it perfect for various applications (especially for VPN).

The Netgear X4S R7800 is now about three years old, but, similarly to the popular R7000, it managed to remain relevant for a long time and it’s a top choice even in 2019. The reason for that is the adoption of some of the best WAVE 2 features, such as the MU-MIMO tech, the 160 MHz bandwidth channels (80+80 MHz) and, of course, the ability to deliver the best wireless performance in its class. 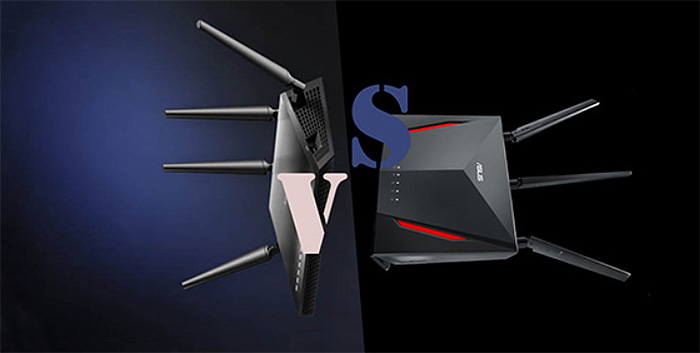 The Asus RT-AC86U is only about a year old and it was released as the official successor to the RT-AC68U, but it didn’t just add better WiFi chipsets (*cough* R7000P), this is a complete refresh in both design and functionality. So, besides a better looking exterior, the router also included the MU-MIMO technology, the BeamForming feature and this device is the first to fully take advantage of the AiMesh technology (which allows multiple Asus routers to create a WiFi system). That being said, it’s easy to understand the appeal of both devices and, while each excels at a specific task, let’s see which of the two routers can offer the best experience for a wider audience.

Design
It’s true that the WiFi systems have managed to capture the attention of a lot of users because of their minimalist, yet attractive design, but, the traditional router isn’t going anywhere, so the bulkier rectangular case with lots of antennas pointing upwards is here to stay. The Asus RT-AC86U is not designed in a minimalist fashion (quite the contrary), but, similarly to the RT-AC68U, it has a very small footprint since it stands horizontally (the router measures 8.6 x 6.3 x 3.2 inches) and the case itself is very compact. 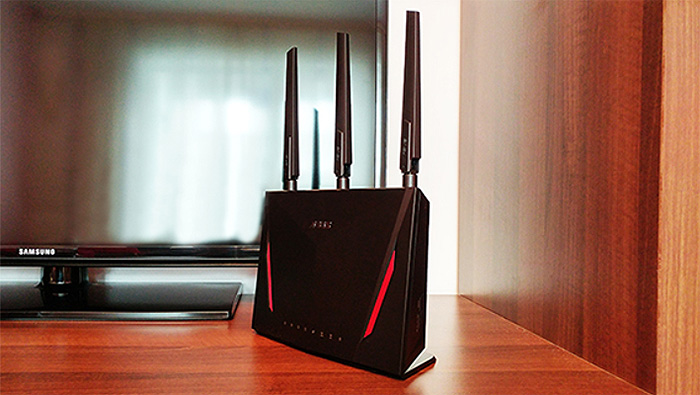 Asus hardly ever shies away from adding some flashy design elements, so the RT-AC86U has also received the ‘gaming’ treatment, sporting two red plastic areas on the front, while the rest of the device remains covered by a black matte finish (which is soft to the touch and, surprisingly, does retain fingerprints).

If you’re familiar with the stealth-plane inspired design of the Netgear R7000, well, it became kind of a trademark for the Nighthawk series (for a while at least), so the Nighthawk R7800 shares the same angular design and it also has the same dimensions (it measures 11.22 x 7.26 x 1.97 inches). The elements that sets it apart are the four antennas (instead of the three of the R7000) and some additional ventilation grills, the rest remains pretty much the same: a robust plastic case covered by a black matte finish. When compared to the RT-AC86U, the R7800 without a doubt covers more space, so it needs more planning before being positioned inside a room.

Fortunately, unlike the Asus router, the Nighthawk X4S can be mounted on the wall thanks to the two dedicated holes from the bottom of the device and this can be a life saver in a crowded office. Certainly, the RT-AC86U can be more easily tucked on a shelf, but, the vertical-only position can be a minor inconvenience. Furthermore, the stand also can’t be detached, but, on the positive side, it does keep the device in place regardless of the number of the cables connected.

One area where the traditional router excels over the WiFi systems is the heat management since we’re dealing with larger cases (usually) with lots of ventilation holes. This remains true for the Asus RT-AC86U and for the Netgear Nighthawk R7800, both devices having enough ventilation grills and cut-outs to keep the temperature at a proper level. At the same time, remember that the RT-AC68U and the RT-AC86U share the same dimensions and have pretty much the same number of cut-outs, but the former still ran a bit hot, so the chipset efficiency is a very important factor to take into account. 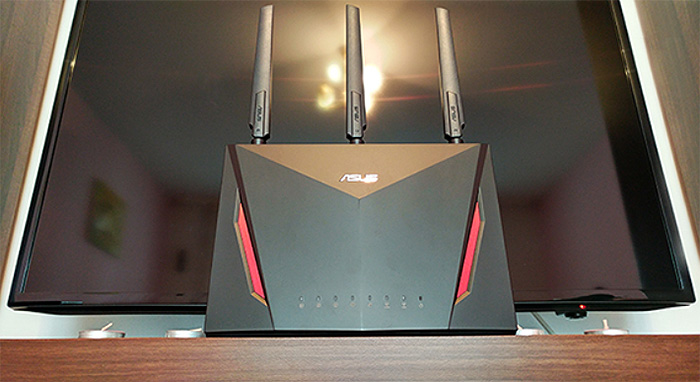 For this reason, the RT-AC86U (being newer) hardly got warm, while the older R7800 does get warmer (though, it didn’t overheat even when put under stress). Another advantage over the WiFi systems is the ability to upgrade the external antennas and, as expected, both the RT-AC86U and the X4S R7800 come with removable omni-directional antennas.

This may be subjective, but I do prefer the array of LEDs instead of the single LED of the WiFi systems and I am glad that both routers do come with multiple LED indicators. Asus has positioned them on the front side, towards the bottom: from the left, there’s the Power LED, the 2.4 and 5GHz LEDs, the WAN LED (red indicates that there is no physical connection or that there is no Internet connection) and four LEDs for the LAN ports.

The Netgear R7800 has a similar set-up, having positioned its LED indicators on the top towards the front side: from the left, there’s the Power LED (flashing white means that the firmware is corrupted), the Internet LED, the 2.4 and the 5GHz LEDs, two LEDs for the USB ports and four LEDs for the LAN ports. Next to the LEDs, there are two buttons, one for switching the WiFi On or Off, while the other initiates the WPS pairing process.

Furthermore, on the left side of the router, you can find two USB 3.0 ports and, on the right side, there’s an eSATA port. As expected, on the rear side of the R7800 X4S, you can find the rest of the ports and buttons: from the left, there’s a LED On/Off switch, a Reset button, four Gigabit LAN ports, one Gigabit WAN port, a DC-IN Power connector and the Power button. 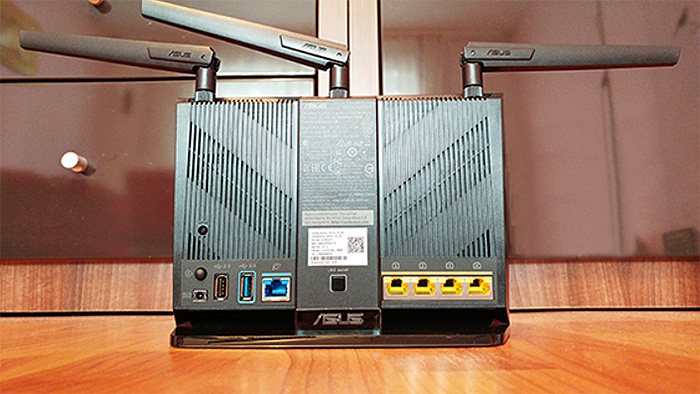 Asus kept all ports on the rear area, so, from the left, there’s the Power button along with the Power connector, a USB 2.0 and a USB 3.0 port, a Gigabit WAN port, while towards the top, you can also find a small Reset button, In the middle, there’s a square LED On/Off button and towards the right, you can find four Gigabit LAN ports. On the left side of the RT-AC86U, you’ll also be able to find two large buttons, one for starting the WPS pairing process, while the other is for switching the WiFi On or Off.

Verdict: I really like the dynamic design of the Nighthawk routers and even three years later, the R7800 still holds its ground against the new releases from the competition, but, I do feel that the market is turning away from the large case with an intimidating design, so the smaller and more compact RT-AC86U may appeal more to the masses. Furthermore, since it is newer and it does have a better heat management, the Asus RT-AC86U wins this round.

Verdict: The Asus RT-AC86U is clearly better equipped in terms of flash storage and CPU, which indicates that it can easily handle taxing applications. The Netgear R7800 does have better WiFi chipsets, so the wireless performance has the potential to be better than that of the Asus RT-AC86U which means that this round ends in a tie.

Features and Performance
The Nighthawk R7800 X4S was the first full 4×4 router (on both the 2.4 GHz and the 5 GHz band) from Netgear and one of the first to have MU-MIMO working out-of-the-box, a technology which ensures that multiple clients can be served at the same time, negating the necessity for them to compete for the bandwidth. The X4S also comes with the BeamForming+ tech which focuses the signal towards the connected clients, therefore improving the bandwidth and minimizing the effect of the interference. Both aforementioned technologies require compatible WiFi cards, so, most users won’t really be able to fully utilize them (MU-MIMO is being implemented more often now, but it’s still only in its less potent 1×1 and 2×2 forms). 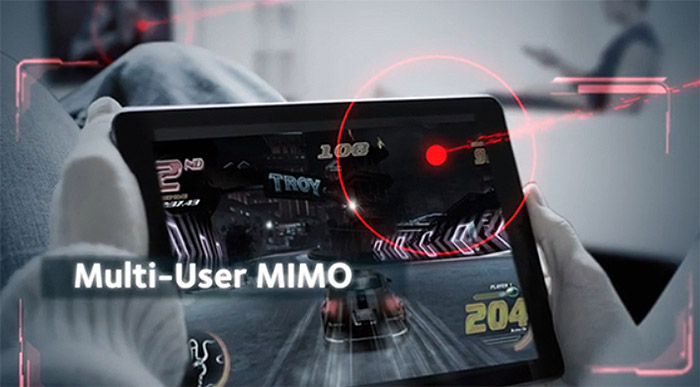 Probably the most interesting R7800’s feature is the support for the 160 MHz bandwidth mode which didn’t make much sense three years ago (since there were no compatible devices available), but it may become the norm in a short period of time, since the new 802.11ax may reach its full potential in about a year or two and will most likely use this tech more often than the 802.11ac.

The Asus RT-AC86U also comes with the MU-MIMO technology (it is 4×4 only on the 5GHz band) and the BeamForming feature, but it lacks the support for 160MHz bandwidth mode. Instead, the router is the first from Asus to support the AiMesh technology, which is similar to the proprietary mesh tech that is implemented on most (if not all) WiFi systems and it functions in the same manner: multiple routers can be grouped to create a mesh network (in this case, we’re not dealing with identical nodes, such as with the Google WiFi or Eero, but with various compatible Asus routers) and this tech creates optimized paths between the mesh nodes (based on the signal strength, the number of connected clients, the distance between the nodes and more); it also ensures that, in case a node fails, the remaining routers will be used to create new paths for the data (in order to safely reach its destination).

This approach is ideal for covering larger areas with WiFi, but does require a proper handling of the backhaul traffic (obviously, it’s better managed on the tri-band systems, but it should be fairly decent with a dual-band system as well, as can be seen in my analysis of the AiMesh tech). Some other common features are related to gaming (and yes, both routers are advertised as being suitable for gaming), the RT-AC86U offering the WTFast game accelerator, Adaptive QoS and Smart Connect (balances the clients between the two radios), while the R7800 X4S offers Dynamic QoS, which, similarly to the Adaptive QoS is probably the only ‘gaming’ feature that most people will end up using. It’s also worth mentioning that the Asus RT-AC86U is also a dual-WAN router (it includes Failover and Load Balance modes).