When I tested the Asus RT-AX58U, I did notice that it has some issues with some Asus 802.11ac PCIe WiFi adapters (the PCE-AC88 and the PCE-AC86U), as well as on a fully compatible 802.11ax adapter from TP-Link (the TX3000E) when the channel bandwidth was set to 160MHz. Considering that there are minimal differences in terms of internal hardware, I did expect a similar behavior and there is good news and bad news. The good news is that the performance is a lot more stable, but the bad news is that I still see some occasional hiccups where the throughput plummets for a few seconds. That being said, let’s get to the numbers. I tested the Asus RT-AX82U in the same manner as all other wireless routers, relying on a computer to act as the server which is connected to the router via an Ethernet cable and another computer will be the wireless client and to get the best performance possible, I equipped it with a TP-Link TX3000E WiFi adapter (AX3000). 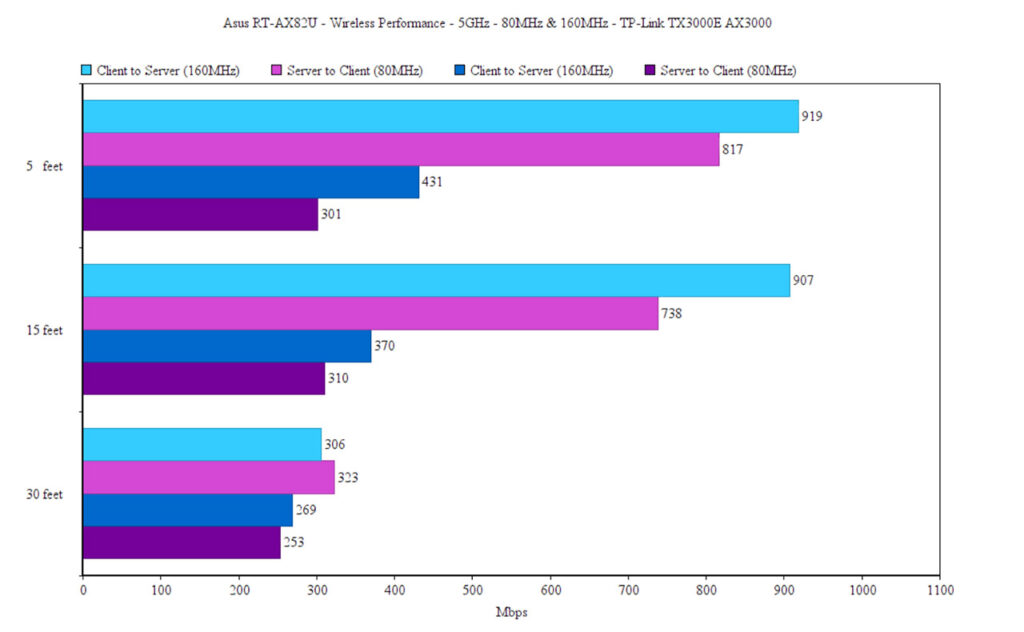 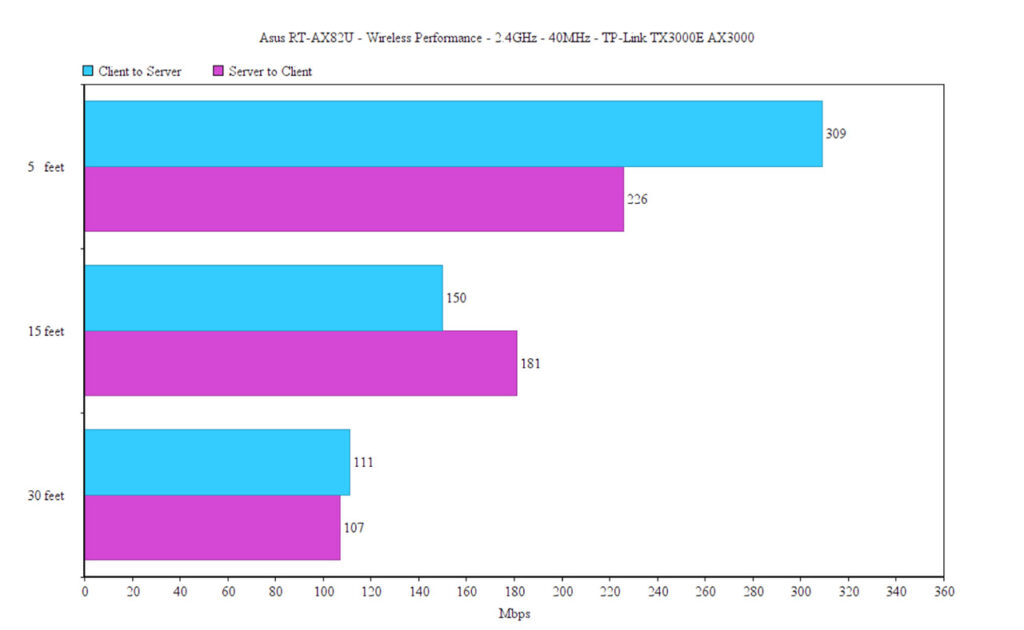 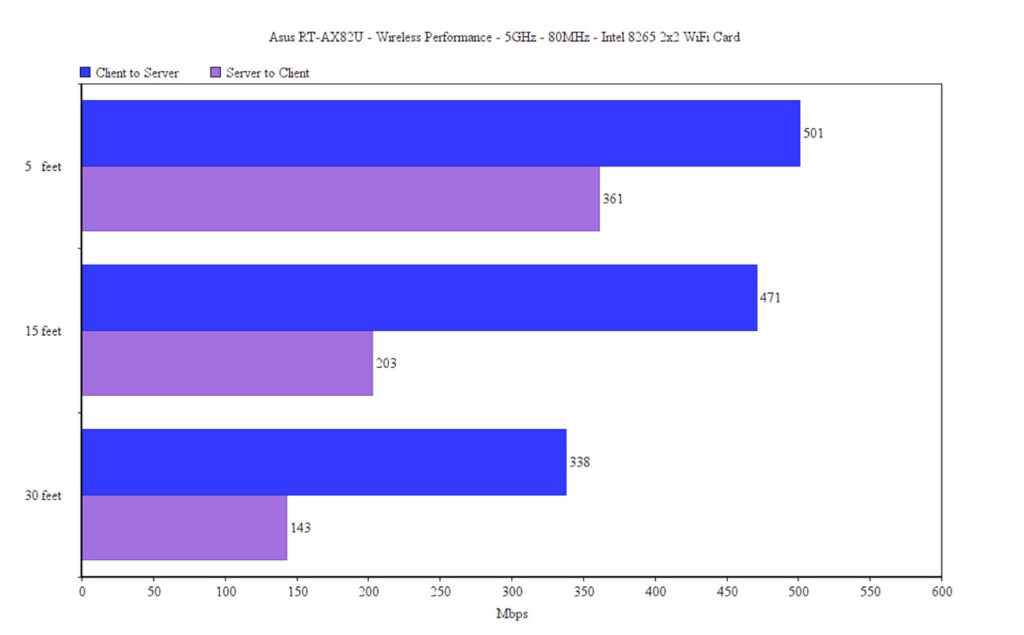 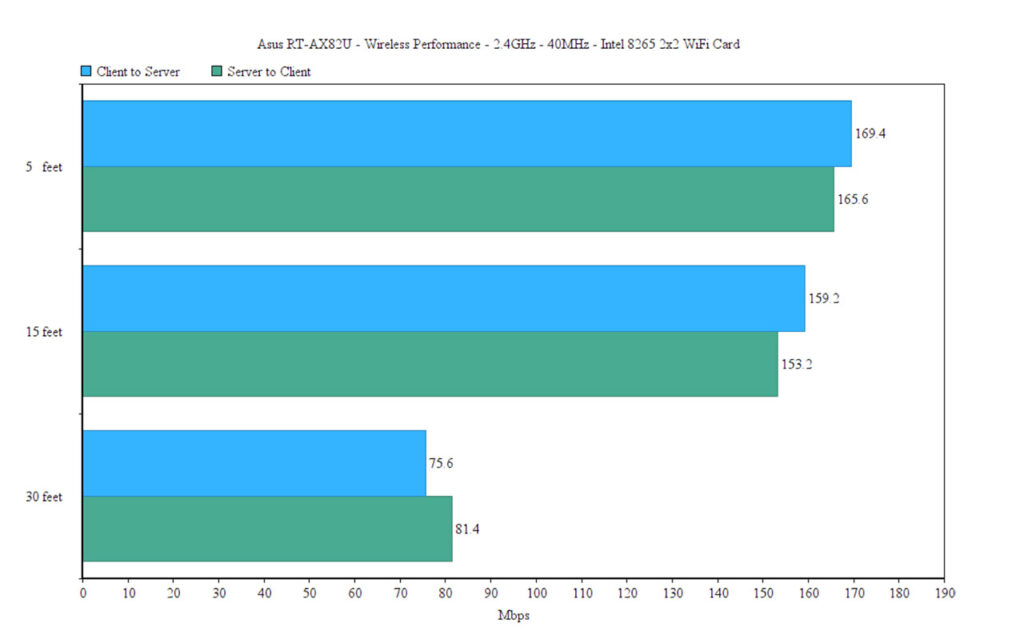 From the server to the client, I saw an average of 165.6 Mbps at 5 feet and an average of 81.4 Mbps at 30 feet. I have added a couple of graphs to show the throughput differences between the Asus RT-AX82u, the RT-AX86U and the TP-Link Archer AX73. Surprisingly, even though it has similar hardware, the RT-AX82U seems to perform weaker than the AX73.

Of course, I also ran a LAN to LAN test (connected both computers to the router via Ethernet cables) and, from the client to the server, I measured an average of 919 Mbps and from the server to the client, I saw an average of 886 Mbps (the performance seems a bit below the RT-AX58U). The last test was to verify the storage performance: I connected a Samsung T5 external SSD and moved a 3GB folder containing multimedia files – the router was able to read the folder at 83 MBps and write it at 50.6 MBps.

The hardware installation is as easy as with any other consumer-based wireless router and all you have to do is use the power cable to connect the RT-AX82U to an outlet (turn the Power switch to on) and then use the provided Ethernet cable to connect your modem to the router (insert it into the WAN port). If you have a console or gaming PC in your house, you should also use a longer Ethernet cable to prioritize this connection (connect it to the LAN 1 port). Afterwards, to start the installation wizard, you can either do it the traditional way (using the web-based UI, where you insert the IP address in the URL bar – by default, it’s 192.168.50.1) or rely on the Asus app. As usual, I decided to go the app route and, after installing it, I had to select the Setting Device (three groups – I chose the first) and the router was then immediately discovered. Afterwards, I was greeted by the Quick Internet Setup window which then allowed me to set the Internet connection (I chose manually since I didn’t yet connect the router to the modem), the SSID (you can choose to keep it as a single network or separate them), the administrator account (it’s best to change the admin name for security purposes) and Enable the Remote Connection. 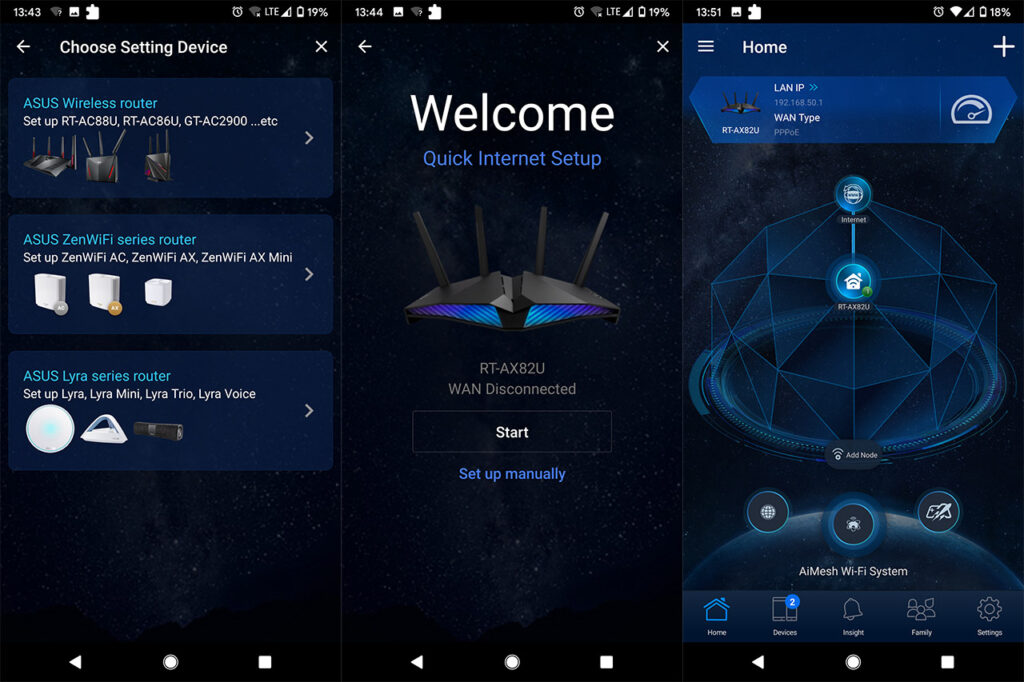 And that’s it, you now have full access to the mobile application. The main page (Home) is the same as on other Asus routers, so it also shows the status of the network at the top, but in the middle, you will be greeted by a new element: the Aura RGB. Tap on it to choose between multiple available colors and patterns, and yes, you can also disable it if the light annoys you. Returning to the Home page, you can also check the AiMesh system status (if you have multiple devices that form a mesh network) and lastly, tapping on the third icon (underneath the interactive layout from the middle) will take you to the Mobile Game Mode. Enabling it will set the mobile device to the highest priority, showing you the Ping and Packet Loss in real time, but be aware that it can affect the way other devices are served, so make sure that it’s not your kids that enable this mode while you’re trying to run something work-related. Speaking of which, there is, of course, a Parental Controls section (click on Family from the bottom menu) where you can immediately Block the Internet Access, schedule the Internet access and choose the type of content that’s going to be blocked (there are a few categories to choose from). 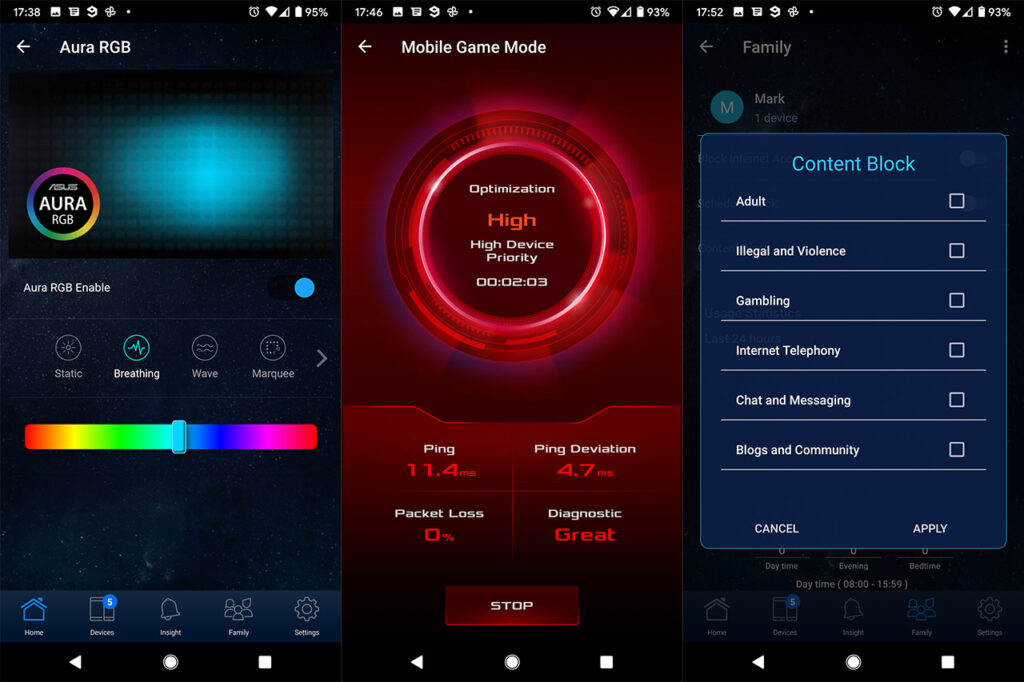 You can also check out the Devices that are or were connected (click on any client to view more info or enable the Bandwidth Limiter) and, using Insight, you can enable the AiProtection and change to https protocol. Lastly, there’s the Settings section which is again, very similar to all other Asus routers that I have tested, allowing you to configure the AiMesh, enable the AiProtection (there are far more related options on the web-based UI), the Gaming Mode, enable QoS, configure the LAN, WAN and WiFi settings, update the Firmware and I noticed that there is also a VPN Clients section, but it simply tells you to go to the web based interface to configure it (?). And that’s what we’re going to do since the app is definitely more than enough for most people, but if you want to configure some more in-depth aspects of the router, you need to use the web-based UI.

I inserted the IP address in the URL, the admin account name and password and was greeted by the same old interface with the menu on the left divided into General and Advanced. It’s worth noting that you can find the Aura RGB under the System Status and under General, you will be able to find two new options (if you come from an Asus RT-AX58U): Game and Open NAT.

If you access the Game section, you get to explore three options: the Gear Accelerator, the Mobile Game Mode and the Open NAT. The Gear Accelerator has the role of setting some devices (selected from the drop-down list) to the highest priority, while the Mobile Game Mode will take you to the preferred mobile store to install the Asus app. Lastly, the Open NAT will open a dedicated window which will create port forwarding rules for online games and you get to select from a pre-existing list or you can create your own profile. 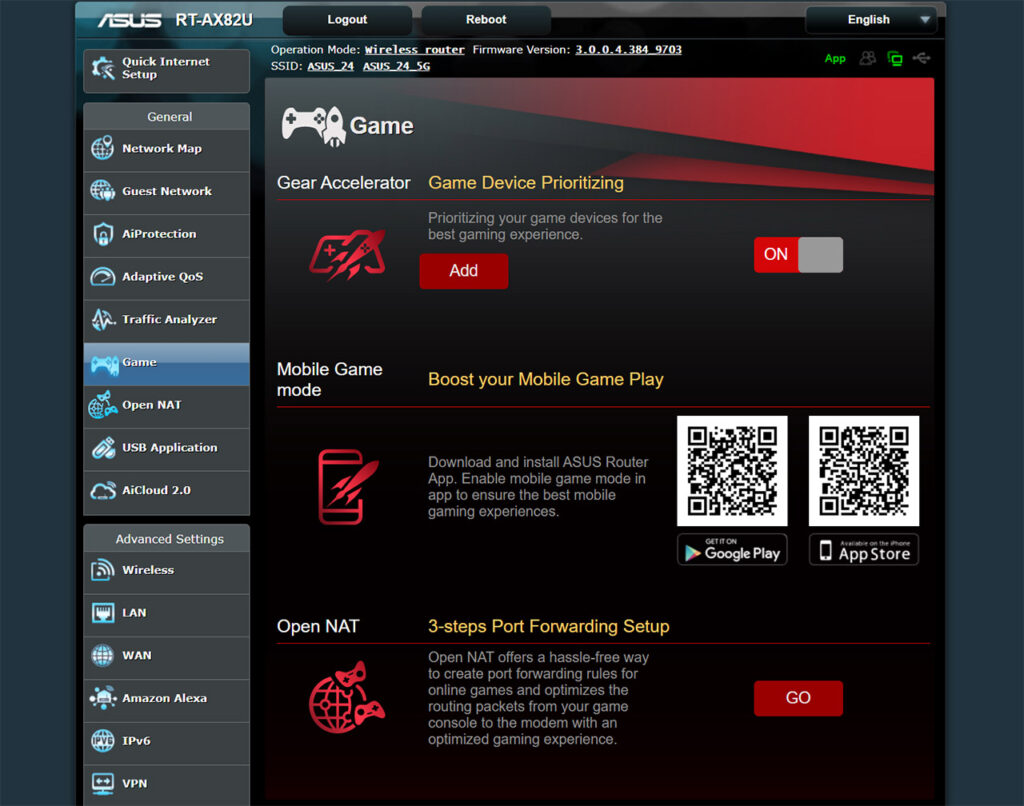 Other than that, under Advanced Settings, you get the usual set of options (which can get quite complex) and I noticed that Asus has also added support for Alexa (if you want to speak some basic controls for the router); there’s also IPv6, Firewall rules and VPN (PPTP, OpenVPN and IPSec VPN).
Note: The Asus RT-AX82U is not yet supported by Merlin (the third-party software), but will most certainly be since both the RT-AX56U and the RT-AX58U are currently supported.

While it does come along with the RT-AX86U, the Asus RT-AX82U has a lot more in common with the RT-AX58U (especially the TUF AX3000 wireless router) and to get significant gains, you need to have compatible wireless clients. And that’s the problems with all the WiFi 6 routers since they still struggle to show a tangible performance improvement when most users have barely adopted the WiFi 5 standard. We also need to talk about the elephant in the room: the WiFi 6E is right around the corner and we don’t know if WiFi 6 devices are going to be fully compatible with it (or even older devices which already have issues with the 802.11ax standard). That being said, if you do want to give the WiFi 6 standard a chance, the Asus RT-AX82U is a bit more stable when using the 160 channel bandwidth than the RT-AX58U, it has a spectacular wireless performance when connected to compatible clients and the gaming features do make QoS a lot more simple for most users, so, considering its competitors, it’s one of the more polished WiFi 6 wireless routers available. 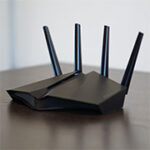